Devolver Digital enjoyed quite a presence at this year’s PAX Prime. Games like Titan Souls, Hotline Miami 2 and Broforce were immensely popular with gamers throughout the weekend, and rightly so. But as breathtakingly brilliant as those games were, Roll7’s Not A Hero was something truly special. A perfect combination of humor, action, and over-the-top violence, Not A Hero was the most fun I had at PAX, period.

Not A Hero’s title is, fittingly, a direct descriptor of your character. You’re definitely not a hero, but in fact a hitman, hired by Bunny Lord to remove any problems during his mayoral campaign. You may be scratching your head trying to decipher exactly what a Bunny Lord is, but try not to dwell on it. He’s a well-dressed figure with a purple bunny head, and his fervent desire for electoral victory is the premise for your entire murderous campaign. That said, the game doesn’t concern itself with plot too much. After all, your job is to kill folks, not tell a story. 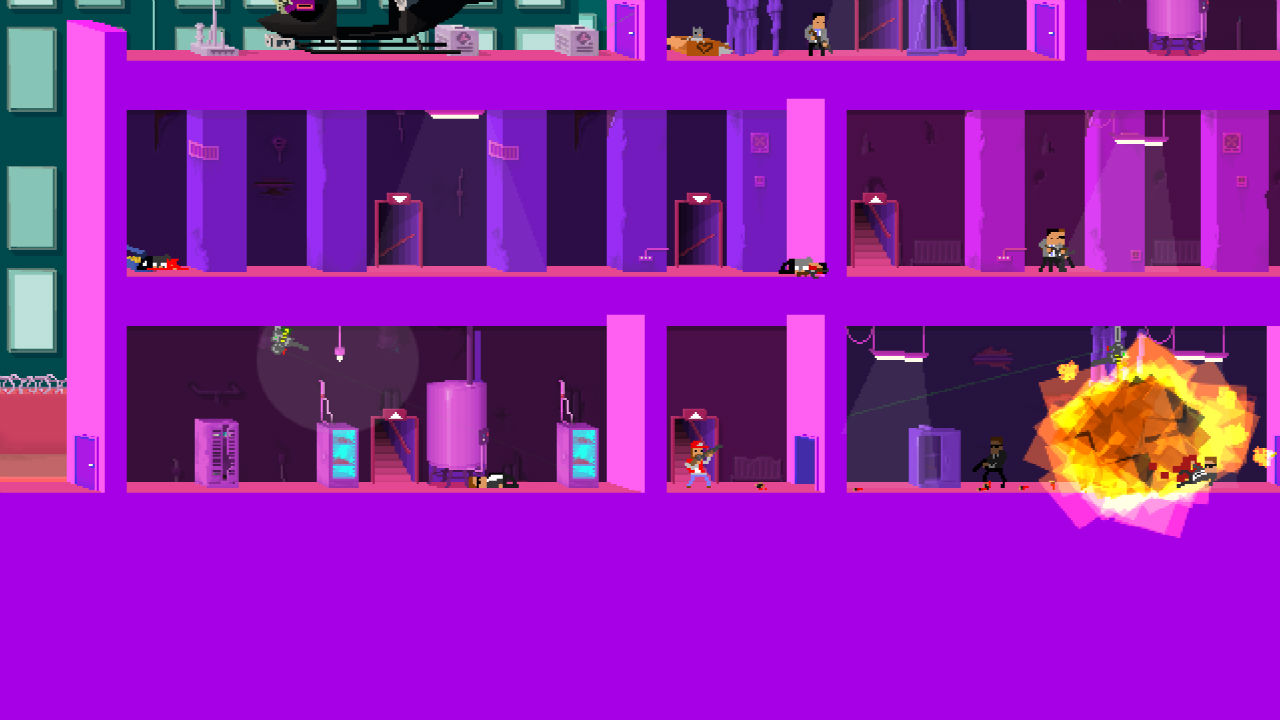 The idea of a 2D cover based shooter seems a bit strange before you see it in action, but Not A Hero executes its design with extreme confidence. The game’s controls are simple: move, slide, shoot, and reload. Pressing the slide button will see your character slide across the room to the next viable cover, where you’ll take on a darker hue to show you’re hidden. You can pop out and shoot your enemies, or slide tackle them onto the floor and perform a gruesome ground execution. Either way, Not A Hero is immediately the hyper-violent, eccentric game it’s designed to be, and it’s so over-the-top I couldn’t help but lose myself in its murderous gameplay.

The simple slide, hide, shoot and reload mechanics betray a deeply skill-based game, and players who rush in guns blazing will quickly be struck down by their ruthless enemies. Besides, playing Not A Hero well brings such genuine satisfaction that it’s hard to imagine why anyone would try to sidestep its design. Bursting through a door and gunning down two guards before knocking the third to the floor and blowing his brains out is absolutely awesome, and it doesn’t take long to find the utter glee that Not A Hero treats each of its players to.

There’s more to each level than just killing all the enemies, though. Each stage actually has four objectives, like finishing in a certain time or collecting something random like bonsai or meat. They’re often quite challenging tasks stacked on top of an already fast-paced game, and players are graded out of four stars on their performance throughout the level. You can also pick up various weapon power-ups throughout each stage, bringing even more outrageous violence to the spectacle. I used landmines, hand grenades, and ballistic bullets throughout the demo, but there are many, many more.

Spanning only 21 levels, Not A Hero looks frighteningly brief on paper. And while it’s true I was a little discouraged by the number initially, I perked right back up when I learned that the game boasts 10 extremely different playable characters, adding immense replayability to the game. Many games boast multiple playable characters, but they’re often nothing more than pallet swaps or loftier jumpers. In Not A Hero, however, every character plays so differently you almost have to learn how to play the game all over again each time. 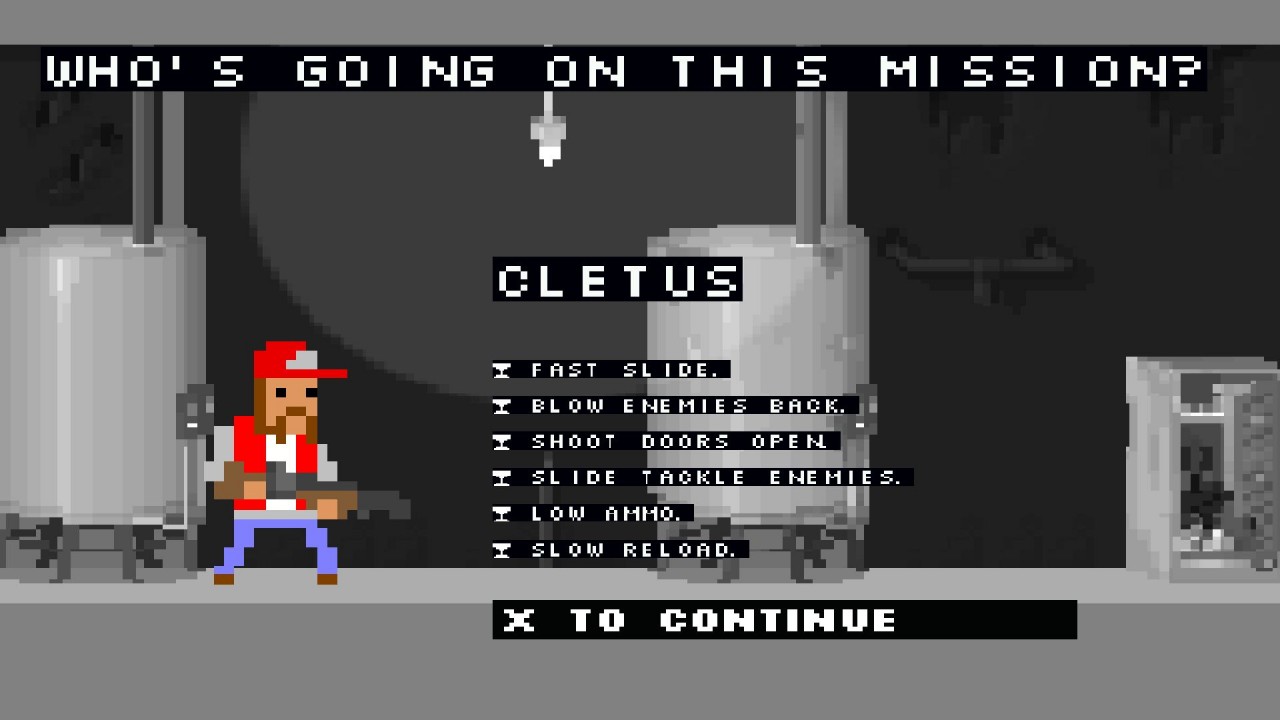 During the demo I tried a man with an automatic weapon but delayed reload, a character that could slide and shoot at the same time, and even a guy with nothing but a cape and a hammer. Not A Hero‘s ridiculous sense of humor is on full display in each of these designs, and I had a blast with every one of them. Many characters handle health differently, too; some regain it automatically, while others need to kill someone to feel better. However, there was one character in particular that stuck with me, and her name was Kimmy. She wields a katana instead of a gun, and pirouettes through enemies like butter. She also lets out a crazed scream before every ground execution, and that outrageous, murderous cry easily became my favorite sound bite from the demo.

Every character in Not A Hero is brimming with personality. Their animations are so lively and vivid that they become more fleshed out than your typical 2D action character, and combined with their brief and silly descriptions (Kimmy likes bacon), you can’t help but become quite fond of each different killer. It’s that extra depth and effort in Not A Hero‘s design that sets it apart from the rest of the retro-styled indie masses. Though it was still in development and sporting some hilarious bugs, it’s easy to tell that Not A Hero has everything it needs to become the next indie success story.