Polish developer People Can Fly has gone on quite a journey since the studio’s founding nearly two decades ago. After releasing their first original game Painkiller in 2004, the developer spent a large portion of the following years working alongside Epic Games, serving as a secondary studio on the original Gears of War trilogy along with their second new IP, Bulletstorm. The team was briefly acquired by Epic in 2012, during which they produced their own Gears of War entry, the prequel Judgment, but they returned to independence in 2015 to begin work on their third original IP. Over the past four years, the four international studios and over two hundred developers that make up People Can Fly have been hard at work on Outriders, which was first shown off at last year’s Square Enix E3 press conference with a cinematic reveal trailer and developer diary. Set in a distant future on a mysterious alien planet, Outriders is planned as a cross-console generation launch that features chaotic co-op battles which rely heavily on sci-fi powers and clever healing mechanics to compliment the focused narrative and deep RPG and loot elements.

Eighty years after leaving a futuristic but doomed Earth, a crew led by the Outriders, a group of skilled soldiers trained to be the first to explore uncharted worlds, sets foot on Enoch, a gorgeous and prospective planet that the team plans on scoping out to determine its viability for human civilization. After encountering alien wildlife, a small squad encounters an anomaly that decimates many of those who landed on Enoch, with the player-character escaping into a cryostasis pod after surviving but clearly having been affected by the abnormal occurrence. Thirty years later, a rogue army uncovers the Outrider’s pod and captures them, sentencing them to all-but-guaranteed death in No Man’s Land, as the planet has undergone drastic changes after three decades of destructive anomalies and constant war by the humans that have managed to survive. Instead of perishing in the wasteland, the player-character becomes an Altered and discovers a set of powerful alien abilities that helps them survive the perils and encounter the resistance, a grimy attempt at society that is being oppressed by opposing forces outside and deadly gangs within.

As the Outrider, players can go solo or team up with up to two friends as they attempt to change the fate of what remains of humanity and bring an end to the constant bloodshed. This grim depiction of the future of humanity is central to the vibe of Outriders, as the focused narrative draws upon a supporting cast that resurface during cutscenes and serves as the heart of the story. Lead writer for Outriders Joshua Rubin, who previously worked on Assassin’s Creed 2, Destiny, and Telltale’s The Walking Dead, made it clear that there was no one set of inspirations that influenced the key themes of the game, instead drawing upon a lifetime of experiences in order to “hold a mirror against the problems of humanity.” While this bleak outlook may make Outriders seem less unique in a crowded market, the juxtaposition between the opening hour and the second half of our time with the game displayed a welcome sense of variety that will hopefully continue throughout the main game.

The pre-release version of the game has a basic character customizer, with no sliders and only a few overall categories, but with enough starting content to separate yourself from another player with minimal effort. The introductory section can only be played solo, but after the story takes a turn for the apocalyptic, players get the option of one of four classes which decides their set of sci-fi abilities, three of which were playable during our hands-on time with the game. While the Pyromancer relies heavily on medium-range fire-based abilities to slowly deal damage, the Devastator is more of a close-ranged tank that deals heavy ground-shaking blows while taking incoming damage. Our playthrough saw us use the trickster, who bends space and time to their will to slow down and teleport behind enemies and projectiles to gain the upper hand. Slaughtering enemies will drop ammo, which can also be acquired at restock points, and occasionally loot, including primary and secondary weapons, pistols, and one of five armor slots that each have their own rankings and stats to encourage constant upgrading. Unused loot can be dismantled, which saw no clear usage during the early hours of the game, or sold and bought at various venders in the hub, who house rotating stocks of new items including higher-end loot with some creative designs. The developers also emphasized the importance of vehicles in the world of Outriders, which are unfortunately not drivable and weren’t present in the opening hours, but will later be customizable and be key to building out your team as you traverse deeper out into Enoch. 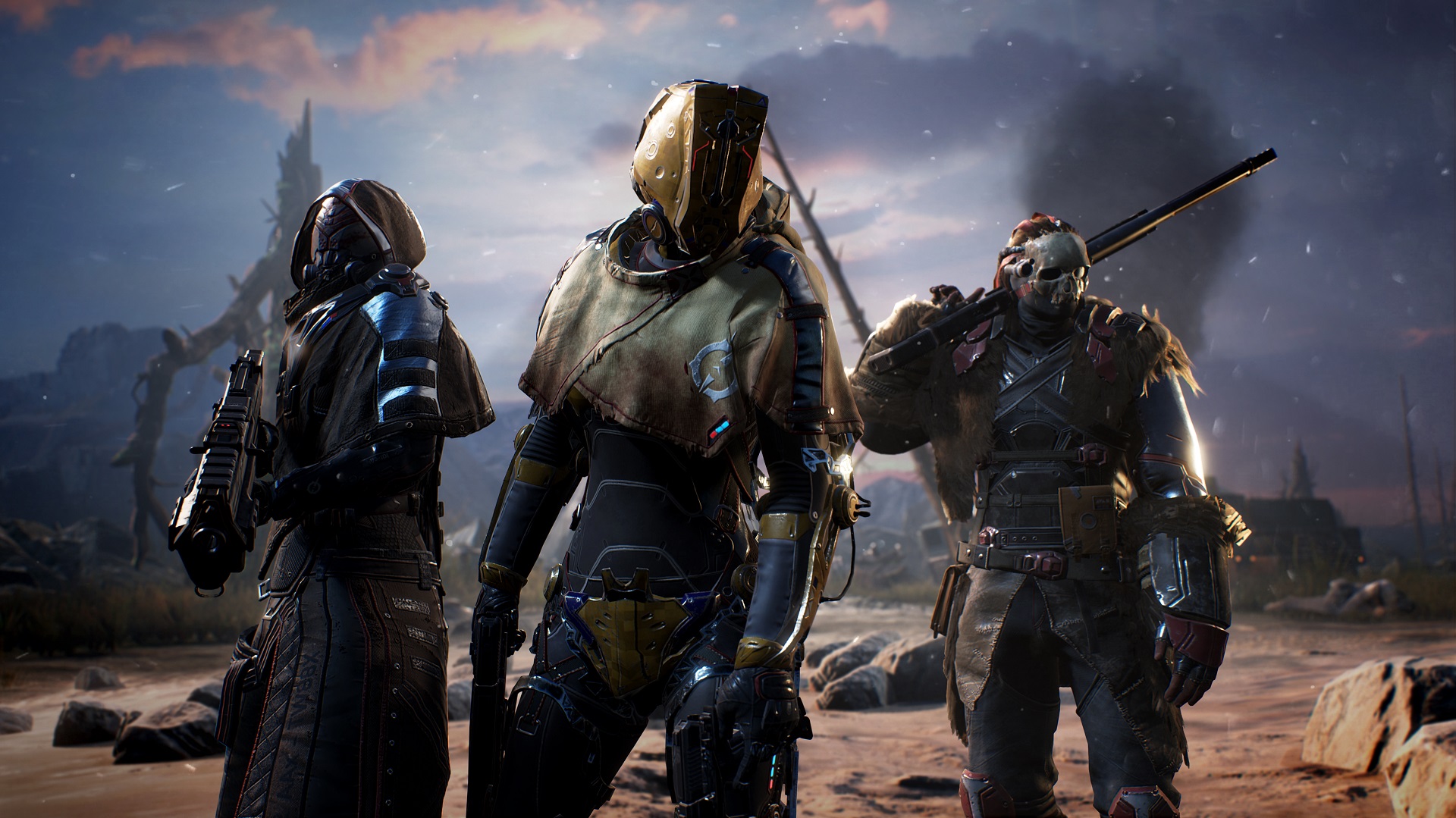 At the core of Outriders is its third-person shooter combat, which relies heavily on both strategic cover and constant movement. While shooting with weapons feels well-polished and satisfying and the enemy variety is noticeable with melee, tank and sniper variations, the powers truly enhance the experience into something special, as the short cooldowns and smart button placement highly encourage frequent usage. In addition, each class has their own healing mechanic that is well integrated into the core combat, such as the Trickster healing with each enemy that is killed in close proximity, so players in more dire situations are encouraged to get up close and personal as opposed to running away and getting in cover, similar to 2016’s DOOM. This clever functionality is best exemplified with power usage, as the Trickster can combine their teleportation and melee powers to simultaneously flank enemies and regain health, turning the tides of the battle in an exhilarating manner that never got old during our time with the game.

This chaotic combat experience is pushed further with one or two allies by your side, as enemies slowed down by the Trickster are prime fodder for being set on fire or knocked down by the Pyromancer or Devastator. Fortunately for players, Outriders allows multiple players to use the same class, which not only removes the element of reluctantly picking a second favorite to satiate a friend, but opens the door to even more ridiculous power combos that make each battle feel unique and thrilling. Of course, this also makes the task of balancing the player and the enemy forces a true challenge, which is a key priority for the developers in the months ahead leading up to its launch. Another key hurdle for the development team lies in the balancing of the solo and co-op experiences, so that independent players don’t get overwhelmed by large forces and squads don’t breeze through encounters without giving it too much thought. While this factor wasn’t specifically addressed by the developers during our discussions with them, one can hope that the launch version of the game will make efforts to achieve this ideal medium. 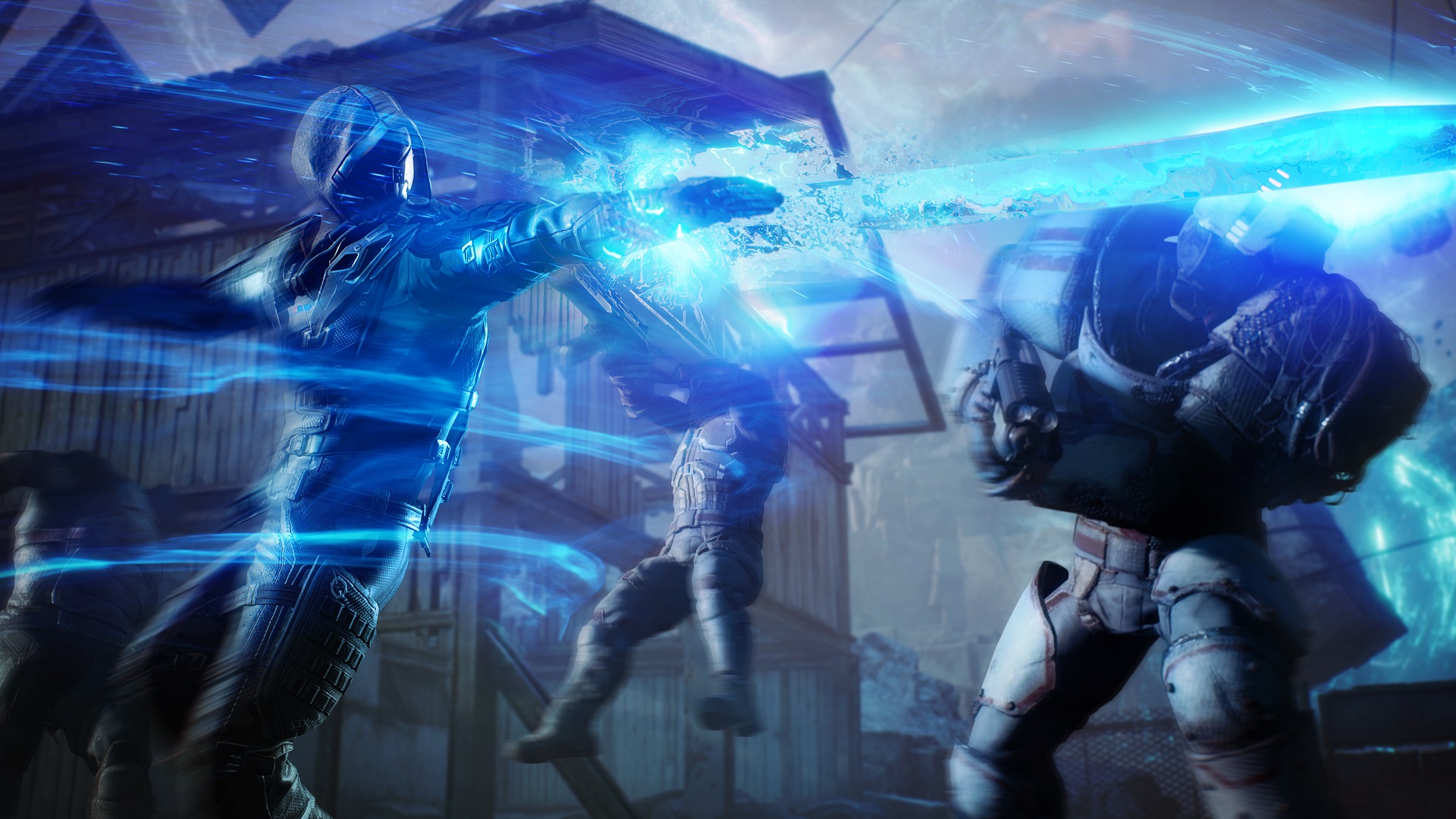 As players explore both the hub area and missions, prompts for side quests will be displayed on the mini-map, with the two optional missions on display in this early section game both yielding fruitful rewards. While the level designs of each of them were more straightforward by comparison, the first side mission rewards players with the addition of a weapons shop in the hub area, while the second presents players with a truly challenging encounter with another Altered human, where keeping an eye on weaker enemies, the boss’s abilities and the boss itself proved to be a shockingly tough but manageable feat for a relatively early fight. Coupled alongside another intense Altered fight that wrapped up our playing time with the game, these memorable victories and meaningful bounties make the replayable side activities feel worthwhile, which will hopefully be sustained throughout the full 20-25 hour adventure.

The depth of Outriders is further bolstered by RPG mechanics that are frequently on display during the downtime between battles. In addition to optional dialogue choices that expand upon the world, the player’s experience and leveling allow opportunities to unlock new powers and various stat boosters via a deep skill tree that is unique to each class. New journal entries frequently pop up as the player continues to explore Epoch, and additional RPG elements were teased by the developers as your journey continues to make for a deeper experience. In lieu of a traditional difficulty selection, the World Tier operates as a separate meter to fill alongside your player level, which increases enemy levels, legendary drop rates and the overall level of dropped items based on the player’s ability to survive enemy encounters. It’s also important to note that while Outriders is slated for current and next-gen consoles, our time spent with the game was on a high-end PC, so one can hope that the launch version of the game will work well on both generations of products. 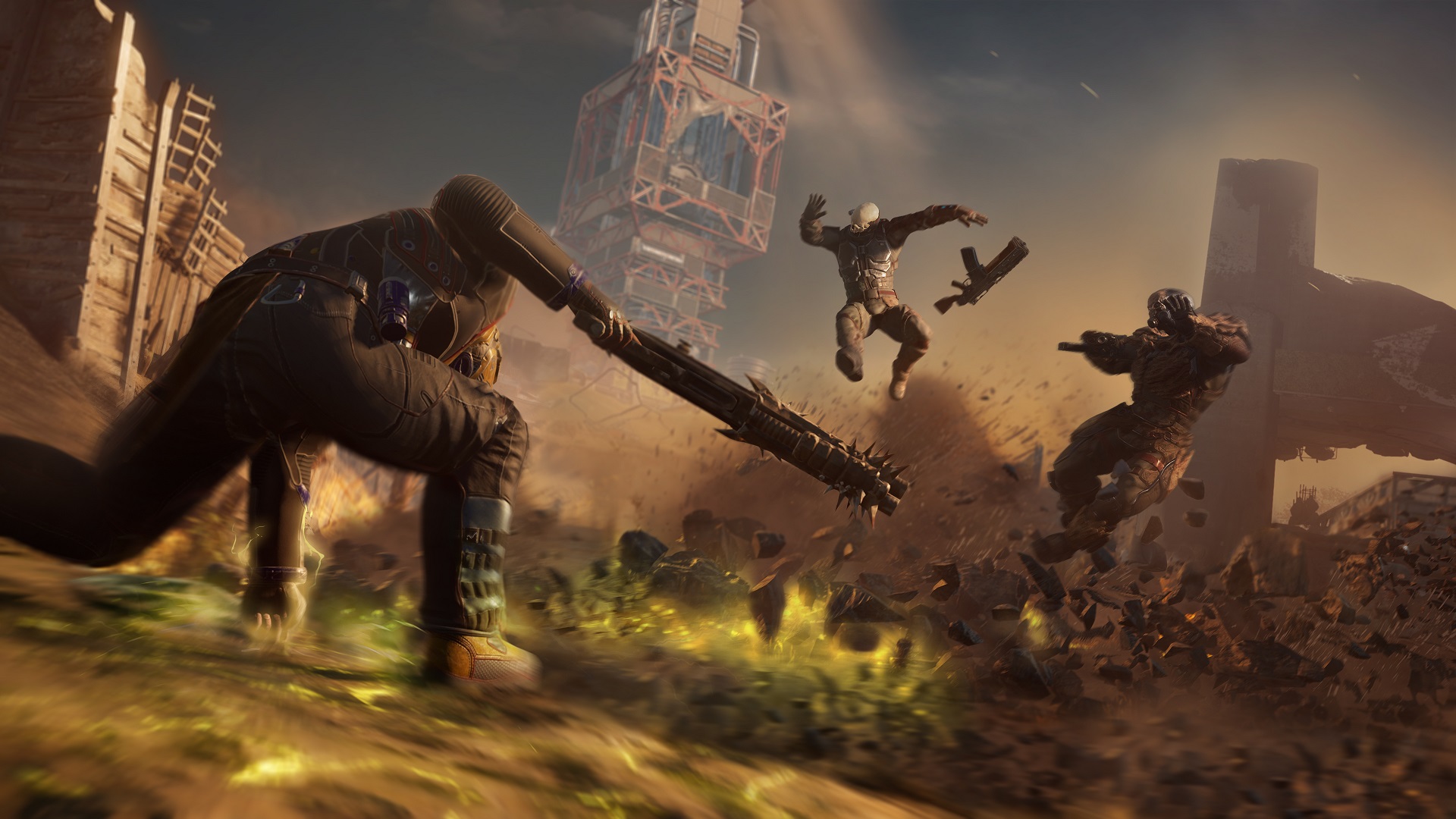 People Can Fly has made it clear that Outriders is intended to be launched as a complete experience, foregoing the trend of games as a service and not featuring any pay-to-win or loot box elements. The finished game will also solely be a PvE experience, as the challenge of balancing the four available classes against AI opponents is already a major task in and of itself without adding competitive multiplayer into the mix. As a result of this main goal, the development team is already considering ideas for the endgame aspect, as that will have to be included from launch instead of added on after the fact. Little was said about this planned endgame, but the team seemed confident that it would be substantial enough to keep players around after the completion of the campaign in addition to the opportunity for replayability. During our two hours with Outriders, the RPG-shooter hybrid shined with its compelling premise and world, varied classes and powers and its chaotic co-op combat, providing a promising glimpse at the start of the next generation of shooters. If the game can launch as a full, polished product and sustain its focused narrative and mission and combat variety throughout the entire campaign, Outriders could easily stand out as one of the must-buy shooters this holiday season when it releases on PS5, Xbox Series X, PC, PS4 and Xbox One.