In the late ’90s and early 2000s there was a boom of unique titles with the Tycoon subtitle that were reminiscent of construction titles like Sim City. Roller Coaster Tycoon and Zoo Tycoon were the most popular ones, and let players build their own crazy rides or exhibits for people to visit. One of the most popular spin-offs was Zoo Tycoon’s expansion that included some of the coolest animals ever — dinosaurs. Parkasaurus is a title that takes inspiration from Zoo Tycoon and many others in the same vein, but with a brand new twist to these prehistoric animals.

The wacky story of Parkasaurus involves aliens, yes that’s right, coming to earth and dropping off some dinosaurs with the task of creating a new kind of park just for their reptilian kind. This starts the goal of creating a wonderful park for these dinosaurs to live and thrive, all along the way making them and their human visitors happy along the way. It’s up to the player to make this all happen over time, no rush of course, but all they’ll begin with is an empty park and a dinosaur egg waiting for its turn to be hatched and welcomed into the world. 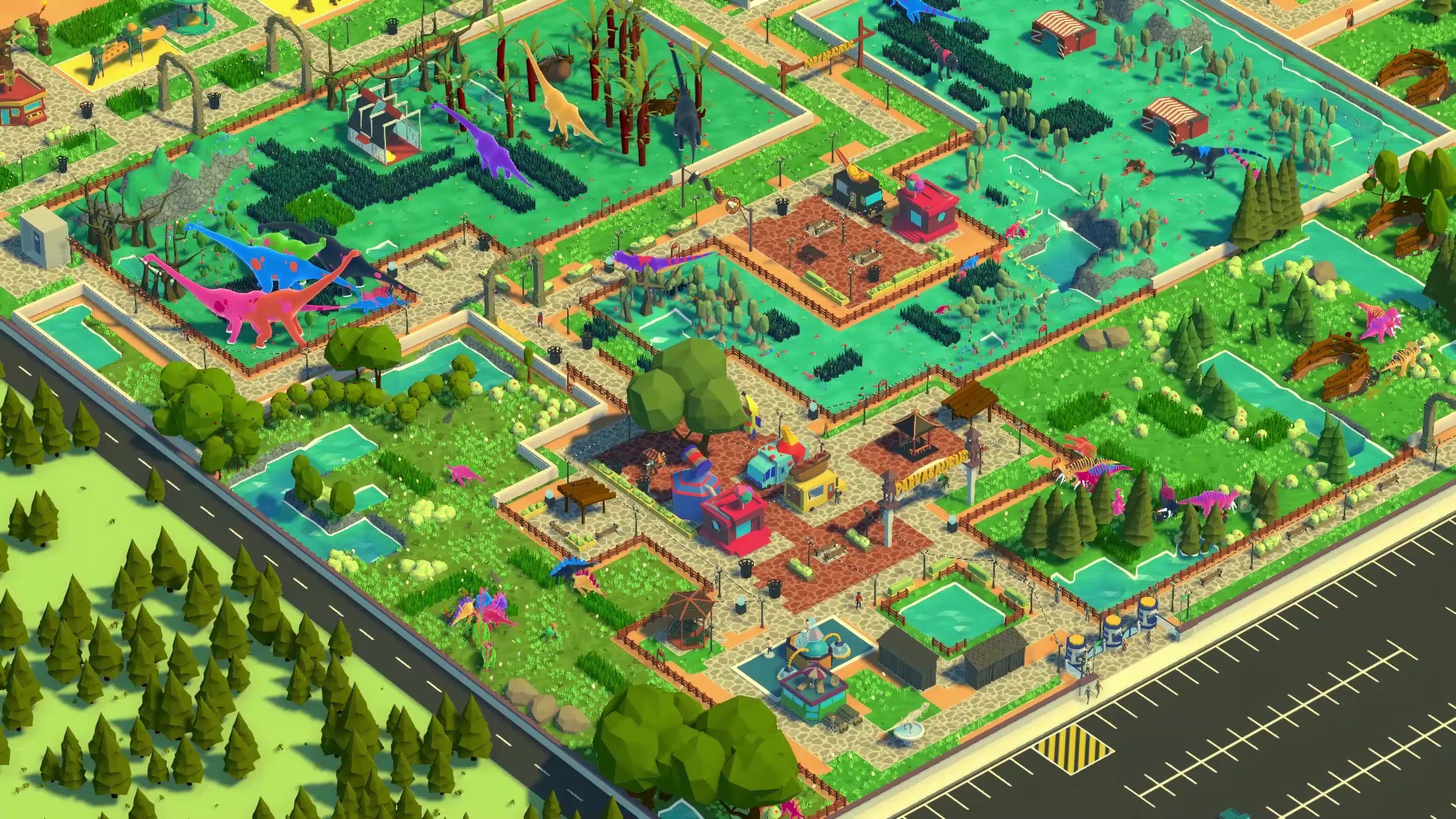 Creation works like any other in Parkasaurus. Starting out requires to build a fence to encase the different kinds of dinosaurs. Then comes the important task of making a fitting terrain for the dinosaur planned to place. This includes water, grass, rocks, trees and even more. One important thing is a place for dinosaurs to hide from the visitors when it’s tired and needs a break. The level of detail in taking care of the dinosaurs is important and makes for a lot of opportunities to remake and rework exhibits as they go along. Hiring employees, including places for visitors to eat, and more will be necessary to make a fully-functioning park that people will be wanting to donate to and visit time and time again.

One of the most endearing elements to Parkasaurus is the art style. A lot of simulators in the same vein often go for the realistic approach and use the traditional bland-colored dinosaurs often seen in films and other media. Parkasaurus goes bright, colorful and cute with its approach. The dinosaurs look full of personality and come in all sorts of shapes and sizes. Nothing here is typical and the art style perfectly fits that. It makes everything pop and stand out, with each dinosaur feeling more like their own person that the player wants to really take care of instead of just an exhibit for visitors to admire behind the fence. 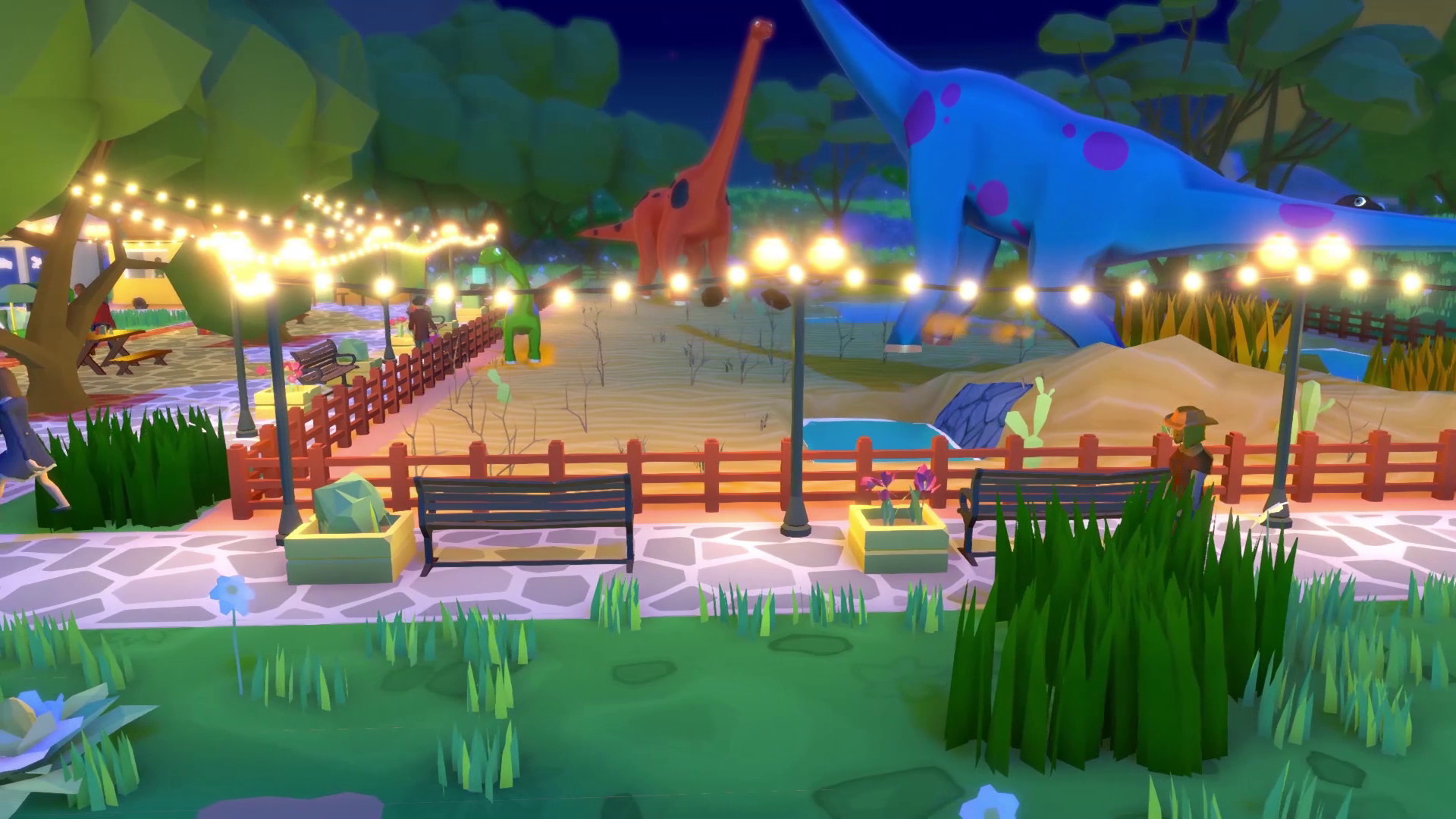 Parkasaurus is a wonderful new take on the tycoon-esque titles that have always been a popular relaxed game to play for just a bit or get intense and spend hours creating the perfect park. From the art style, unique mechanics and variety in the actual dinosaurs themselves, Parkasaurus is building a fun exploration into what taking care of dinosaurs brought about by aliens might really be like. There’s a wonderful amount of variety here that will make it fun to restart and build a brand new park over again once one has been built or just be happy with one big park and continue with it as they go along. While Parkasaurus has yet to full release, anyone interested in trying it out can check it out on Steam Early Access right now and get to building their very own dino park.