Upon learning about tinyBuild and Pinokl’s upcoming Party Hard spinoff, Party Hard Tycoon, a look of befuddlement appeared across my face. A simulation game about crafting parties and managing your services coming from a game where the goal was to slaughter the dozens of people attending all of these shindigs? That just sounds like a Dead Space spin-off where the goal is to build and maintain your own space station. Something that’s not impossible to pull off, mind you, just something that feels odd. And thankfully, if the initial impressions are anything to go by, Party Hard Tycoon looks like it should easily be able to make for quite the entertaining game.

After being given a ton of money for demo purposes, I was given a map and had to choose where to host a party, each location costing a different amount to host an event in. Eventually, I decided to go with a modest affair in the woods, then got set up with a client and theme (a Playboy Mansion expy), and then had to begin customizing things. First, there was the manner of choosing which three staff members to hire out of a pool of different types, such as entertainers to liven up the crowd or bouncers to kick out anyone who’s bringing down the mood. Then there was the manner of hiring special guests to drop by to provide an impact, such as popular singers. Finally, the map of the party area was provided, where various speakers, catering tables, light shows, et cetera had to be purchased and placed in the correct spots for maximum efficiency, each one showing the radius of the area it affects. 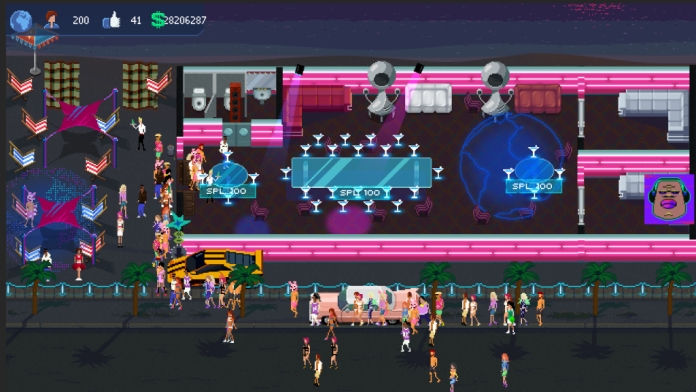 Finally, after placing down a giant Burning Man-style sculpture, several varieties of speakers, and a strategically-placed bar and buffet table, we were ready to go. The soiree began, and the guests began to pile in, forming a nice crowd. Now I manually had to choose the best moments to activate the light shows, when to send out my entertainers, and made sure the food and drink tables were properly stocked at all times, which had little meters indicating their levels. But after several hours had passed and the party began to die down, the guests began leaving, and the social media likes began to pour in, with over two hundred likes and not a single disappointed patron. Success!

Except, not so much. For one, it turns out that I was still criticized for holding a Playboy Mansion party in the woods, meaning that the theme didn’t exactly match the setting. Furthermore, it also seems that I had actually lost a couple hundred thousand dollars or so on the event, because my desire to throw the best party possible conflicted with the budget and the size of the crowd that we would actually attract. Dang. Still, it was a highly fun experience that made for a terrific simulator which controlled nicely, complete with the same attractive graphics and art style Party Hard had (even if more than a few assets were re-used, obviously). So Party Hard Tycoon may be an oddity, but it easily has the potential to be a damn fun oddity when it comes out in the near future, so keep an eye out for it.