Divinity: Original Sin was met with universal acclaim when it was introduced over two years ago.  This should not be surprising, as the title featured a massive world to explore had almost no restrictions on how the player went about completing it.  This story driven adventure featured a multitude of side quests that could be handled in a variety of different manners, resulting in a game experience that becomes uniquely tailored to the player’s choices and play style.  Creating a worthy follow up to to such a quality game is no small task, but Larian Studios seems to be up to the ambitious task of creating a sequel that doesn’t simply match the quality of its predecessor but also surpass it.

In a departure from the first game where the player assumed the role of a Source Hunter to rid the world of the forbidden magic known as Source, we are now taking on the role of a Sourcerer.  Taking place 1000 years after the events of its predecessor, the story begins with the player being held prisoner in Fort Joy, a misnomer if there ever was one.  The Divine is dead and the Void is expanding, which will eventually consume this godless world if it remains unchallenged.  Sourcerers are taking the blame for this turn of events, with the player being the main target for the Magisters of the Divine Order’s witch hunt.  Fort Joy is where you were sent to be “cured” of your powers.  While the specific method of “curing” is not spelled out in detail, the self preservation instinct kicks in to send the message the only objective for now is to get the hell out of Fort Joy. 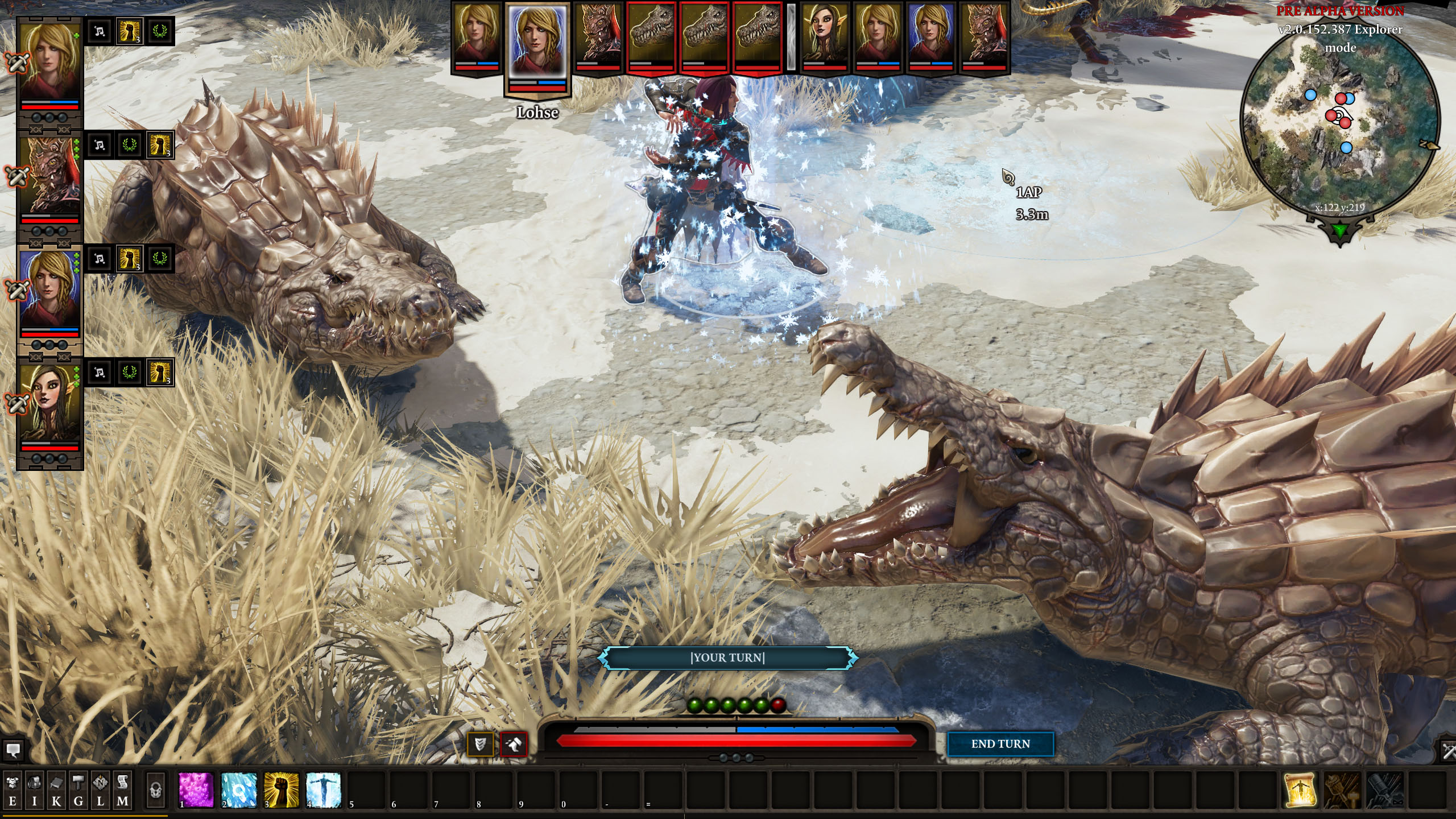 Limited hands on time with the early build of Divinity: Original Sin II can only paint a very limited picture of what will be forthcoming in the sequel, but the information available should assure fans of the original that they can remain optimistic about what is to come.  The enormous world and the near limitless freedom to explore it returns, as will the lauded combat system.  Veterans of the original will feel at home in combat, though several improvements have been added.

Environment will play a more significant role this time around.  Height does factor into battle strategy, making the decision to initiate battle from a cliff overlooking your enemies or from a rooftop an advantageous decision, though be warned the battlefield position benefits do work both ways.  Areas of the battlefield can receive a blessing or curse, effecting all who enter the area.  The ground may be frozen, energized, or set ablaze, making a path to an enemy or ally inaccessible without sustaining damage.  The number of available skills and spells have been greatly expanded, and as a Sorcerer the player will have access to spells with unimaginable power, demonstrating why this potent magic has been banned.  The action point system has been revamped making planning the next move in battle a more calculated decision.  Lastly, if you think you have mastered the battle system, the option to put your money where your mouth is available in the new PvP arena where you can test your combat prowess against another player. 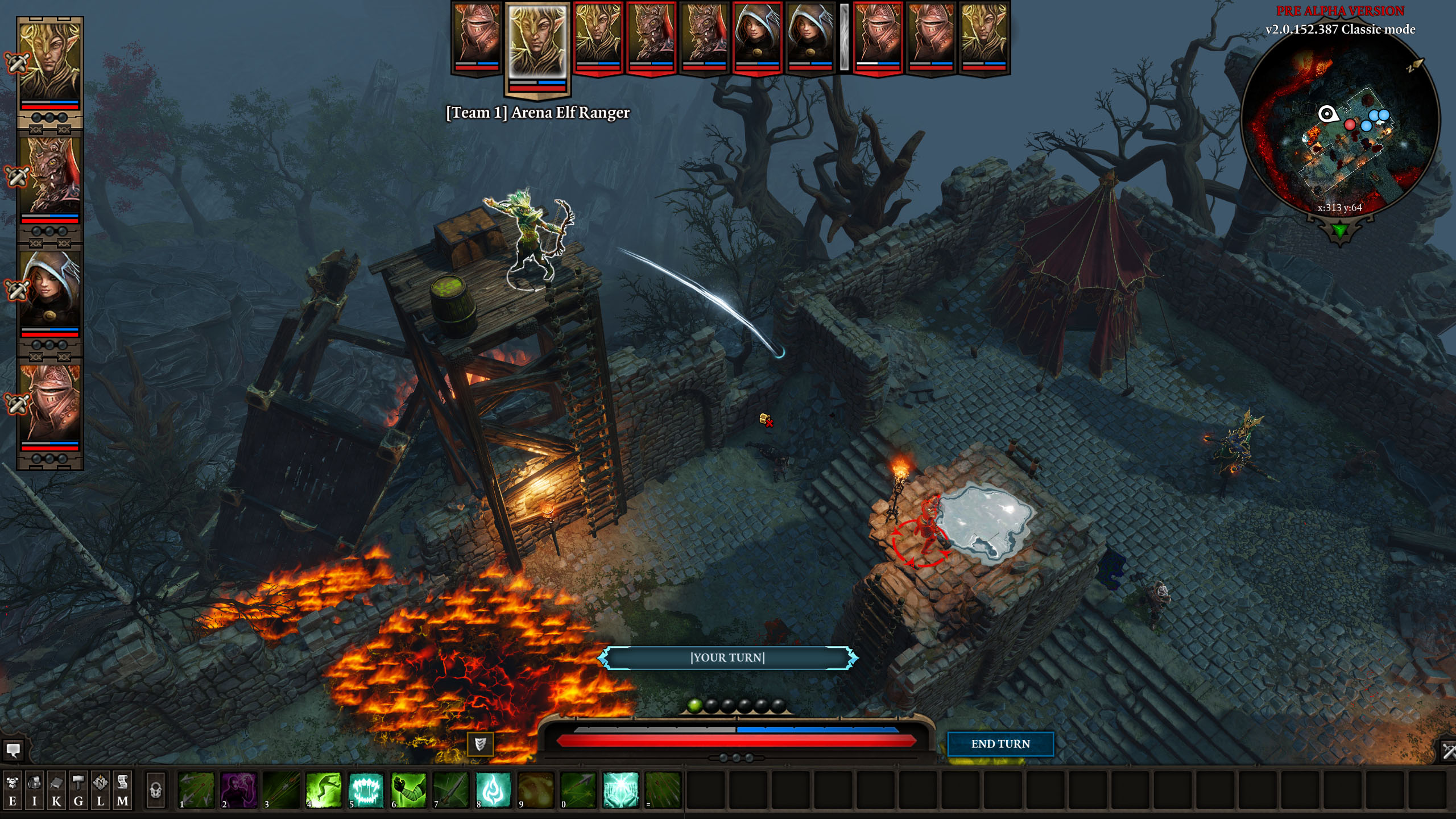 The character creation process has received a massive overhaul.  The player is no longer restricted to only playing as a human as Divinity:  Original Sin II offers the option of also playing as a dwarf, elf, lizard, or undead.  Each of these races has their own unique ability.  For example, an elf can gain the memories of another individual through the simple act of cannibalism.  So if you happen to stumble across a corpse, grab that severed limb, liberally apply some seasoning and let the elf party member chow down to unlock some of their memories.  Dead men do tell tales, and they are also delicious part of a balanced diet.

The player is free to create a custom original character to fit their own design as was the case in its predecessor, but the option of selection a premade character with an origin story is available.  These characters come with their own unique background that are closely linked to the main narrative.  Origin story characters not selected by the player can still be encountered as NPCs and possible join the character’s party.  The origin story will be an evolving element of the character that is shaped through completion of origin story quests.  The specific origin stories will influence how the inhabitant of Rivellon react to the player and will provide additional dialog options.  There are currently four origin stories available in the Early Access with the plan to add more as the game continues to develop.  To give an example of what makes origin stories unique, the character Lohse has an entity that communicates with her, something akin to demonic possession mixed with schizophrenia.  It is possible for Lohse to enter a state of temporary insanity if she fails to win a challenge against this thing that dwells within her. 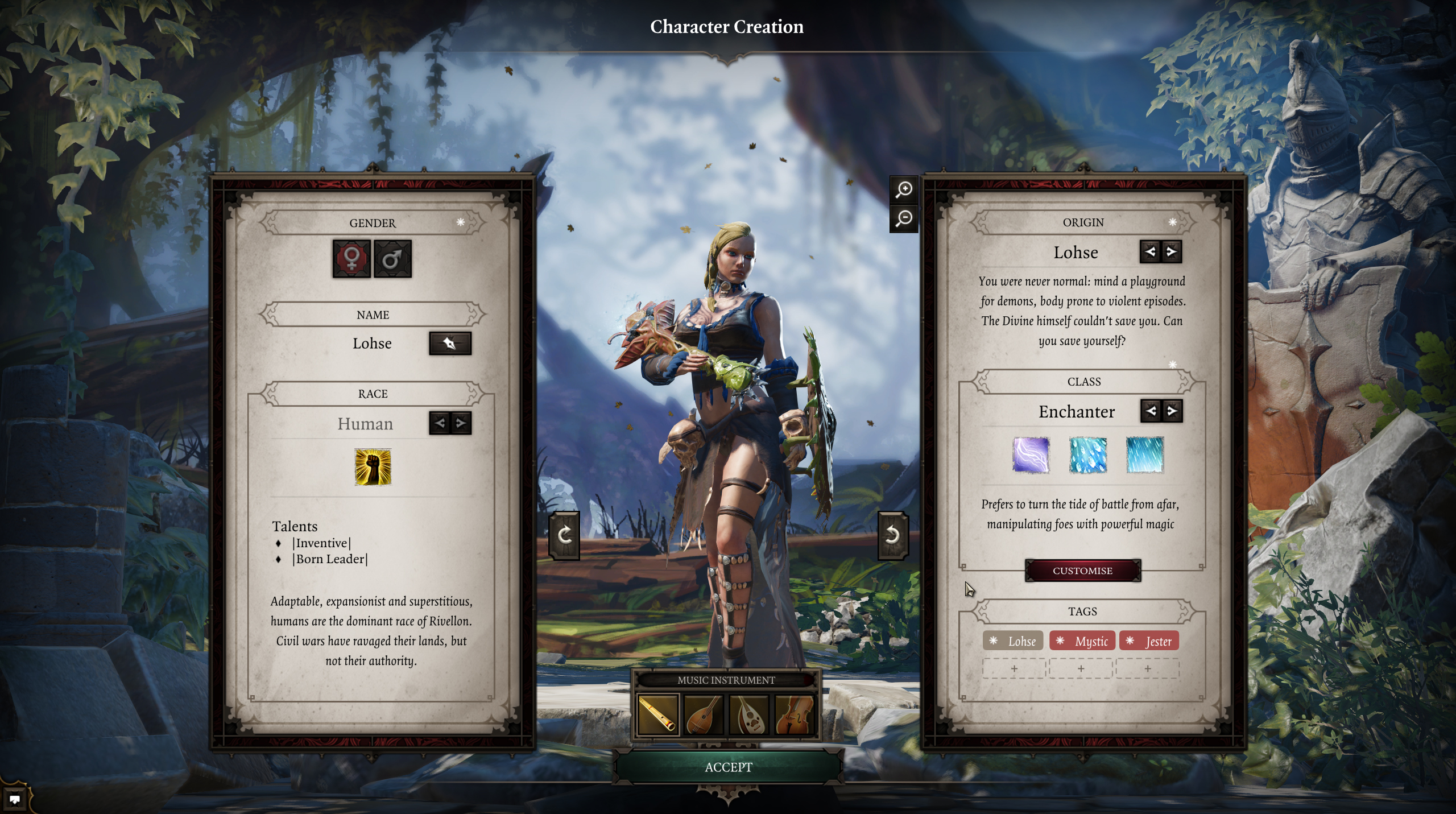 The tag system is a new feature introduced in this sequel, which allows specific dialog options to become available based on gender, race, profession, and origin story.  New tags may be gained and current tags may be lost based on character decisions and achievements.  Should the player choose to design a character without an origin story, they will have the choice to add extra tags during the creation process to help personalize the experience by giving the character a unique personality and dialog options.  There are presets that allow a character to begin the game better suited for a play style fitting a traditional RPG class such as warrior or rogue but there are no character classes, allowing the character to be customized and built as they progress through the game however the player sees fit.  The multiplayer limit has been raised from two player to four player, and players may be in direct conflict with each other during certain quest goals based on origin story, making it a spur of the moment decision to play cooperatively or competitively.  There is also the new dynamic music system where the player selects a character’s chosen instrument, allowing this instrument to take lead in the soundtrack during crucial moments of combat or story development.

The first Divinity:  Original Sin offered almost unbridled freedom to the player, and it looks like the sequel is prepared to offer even more.  Divinity:  Original Sin II is designed to be played however the player wants.  NPC conflicts can be handled by attempting to talk one’s way out of trouble using the tag system, whether it be through charm, logic, or intimidation.  Of course, the option to kill anyone in the game exists as well.  Killing a quest giver might cause the player to miss out on an interesting quest, but they will still be able to complete the game.  Even if every single NPC is sent to an early grave by the player’s hand, it is still possible to complete the game.  If a treasure box is out of reach teleportation or telekinesis are viable options.  If a locked door is preventing your egress one can hunt for a key or if they have nimble fingers pick the lock.  If neither of those options is feasible, bashing it down or setting it ablaze work just as well.  This is not a game to hold your hand and instruct you what to do and how to do it.  You will be given an objective and goal, and how you wish to achieve it will be determined by you. 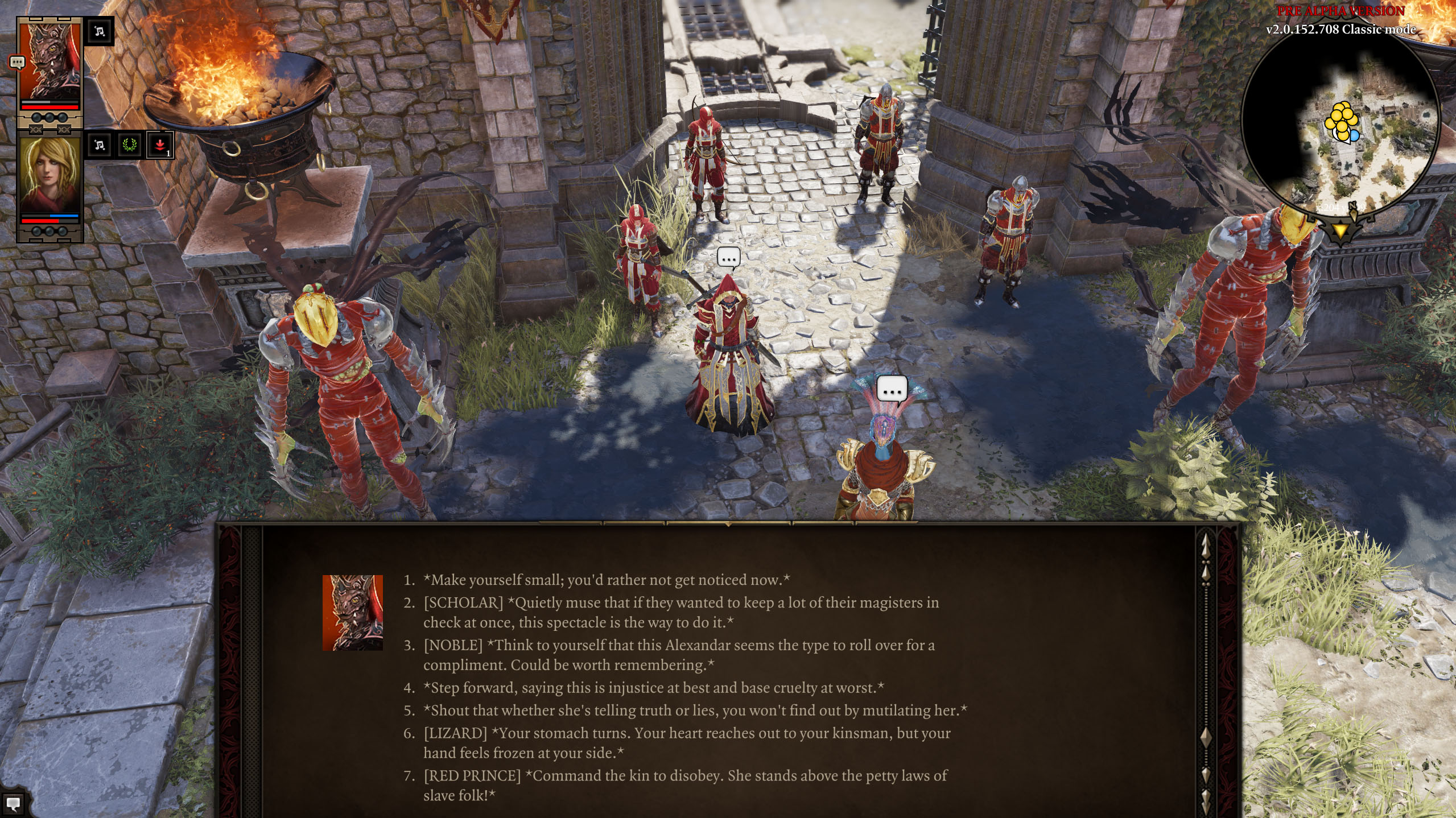 While many changes and updates have been discussed, this is not a complete listing of all the new features and improvements present in Divinity: Original Sin.  As the game continues to develop, more information will be provided leading up to the release of the final product.  For those who cannot wait until its completion, this title will be available on Steam Early Access September 15.  Stating definitively that this is an improvement on the original is impossible based on only playing a small portion of an early build, especially since the original set the bar to some lofty heights, but it’s safe to say fans of Divinity have every reason to be excited about Original Sin II.