No trip to any PAX event would truly complete without a trip to Devolver Digital’s booth to sample whatever twisted genius they have to offer. While we did cover Ruiner at PAX South as well, a piece of glorious cyberpunk action like this deserves another look, so I delved in to try and see if I could get anything else out of the demo that we may have missed. One thing was on my mind as I checked everything out: The fact that my sole objective while playing was “KILL THE BOSS” 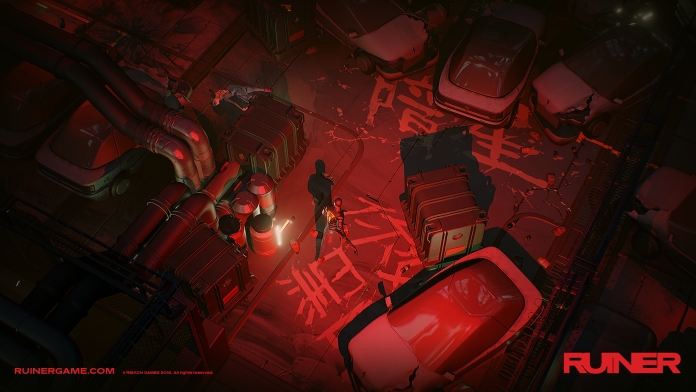 Now, given that Ruiner has all of the makings of a joyfully ultraviolent, classic isometric action game (again, this was somewhat of an unintentional theme at this year’s PAX East), I kept thinking to myself: Is this all meant to be a deconstruction or satire of the genre? After all, the only goal it gives you is “KILL THE BOSS” like is was an instruction in an old arcade game. In fact, while not suggesting the two are directly similar, it feels like the setup in Hotline Miami where the player is given vague threats when it comes to their objectives, and the people behind everything are essentially preying on the player’s love of violence. In fact, as our LED mask-wearing protagonist keeps receiving instructions from a mysterious voice and has other people hacking into it as well, so are we even really the player controlling things? I needed answers!

So I spoke with Reikon Games’ Story Designer Magdalena Tomkowicz after playing, offered the above theories, and she said, to simplify things, “No.”

Yeah, maybe playing too much of games like NieR: Automata recently have me too suspicious of potential plot twists and meta angles concerning gameplay and story in a lot of stuff recently. But then again, Ruiner is also part of the cyberpunk genre, which is always open to mystery and suspenseful twists and turns, which Ruiner’s plot clearly aims to deliver. Actually, Magdalena did still say there would be somewhat of a meta angle to things…so apparently it’s just not one that I’m thinking of… 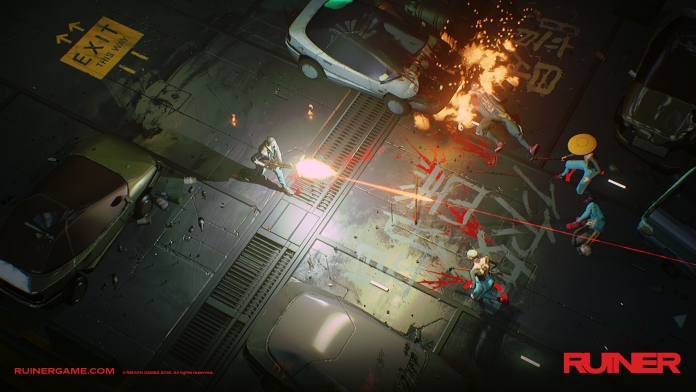 But actually, let’s forget about any insane theories concerning the game’s setup, because all that matters is that Ruiner is shaping up to be a pretty intense action game, plain and simple. Dashing around areas filled with groups of armed enemies and grabbing up several sleek, futuristic weapons along the way (though a classic shotgun still appears to be one of the best choices) while occasionally going into slo-mo mode to blow away your opposition, is, unsurprisingly, just damn fun. And the challenge level seems just right, putting up large skirmishes while still making things manageable, making sure its pure skill that wins out in the end.

If Ruiner was meant to evoke the type of quality action found in similar old-school games such as the Crusader titles, then it looks like Reikon Games may have easily succeeded in matching the greats. Even on its own, we have an intense piece of work here, one that will aim to deliver a deep and joyfully carnage-filled experience with an intriguing narrative when it comes out this Summer for PC, PlayStation 4 and Xbox One.

…Actually, are my suspicions correct all along? Better think this over…