Comedy games can always be a bit tricky to pull off, because nailing down the style of humor and what jokes work with it can be a difficult task. Developer Zoink Games pulled it off with the classic that was Stick It to The Man!, but in this writer’s opinion, floundered a bit with their next game, Zombie Vikings. Of course, Zombie Vikings didn’t have powerhouse comic writer Ryan North helping them out, but now that North is back to assist with their SItTM! successor Flipping Death, it looks like we we may have another potential comedic adventure classic on our hands. 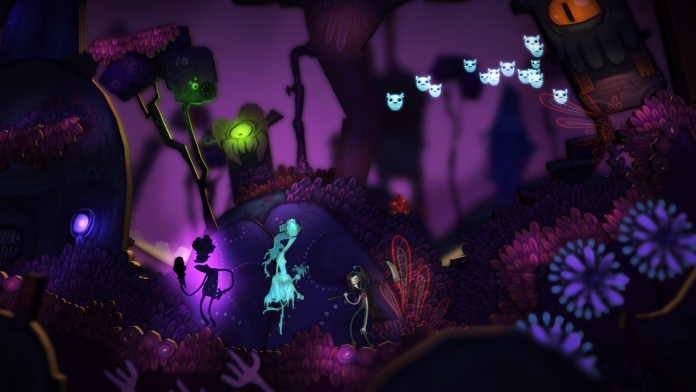 Taking place in an afterlife known as the Otherside, a cemetery where you marry the sea, Flipping Death has you playing as temp reaper Penny, where you solve dilemmas for ghosts forced to stick around by taking over a living person and flipping back into the real world, hence the title. In that sense, the game has some similarities to another comedy adventure game, Double Fine’s Stacking. You essentially possess someone else’s body and control them as they move around, with each person having their own unique skill. The tennis player swings a racket, the priest sprays around holy water, the dog is…well, a dog, and many more. The main differences from Stacking, though, are that possession requires you to gather a specific amount of souls in the Otherside as currency before you can unlock a body, and that utilizing their skills involves moving the right analog stick around to flail some limbs about in a comical session. And much like the games by Schafer and company, this leads to more than a few gleefully odd ways to achieve your goals.

The initial demo given presented a relatively simple puzzle in the beginning: A ghost in the afterlife can’t move on until his boat has finally been given the paint job he initially wanted for it. Now, possessing a body to activate the mechanism at the paint factory in order to produce the bucket of blue paint needed was the easy part. But how do you possibly get it to the boat, especially since none of the folks you control are capable of just simply picking it up?

Well, the answer is quite simple. You head into the Otherside where the paint can has manifested itself as a giant blue monster, then note that it feeds on particular winged skulls. So you use your scythe as a projectile to knock out several of these skulls in order to lead the monster can to a giant ghost hand, which forces it to stay in place. Then you possess a dentist in order to use his drill to cause the paint to leak out over a former lollipop champion’s grave, then possess the man at the church who loves lollipops to lick the grave with his tongue, thus allowing you to use it as a paintbrush and swab the paint all over the boat, accomplishing your goal. 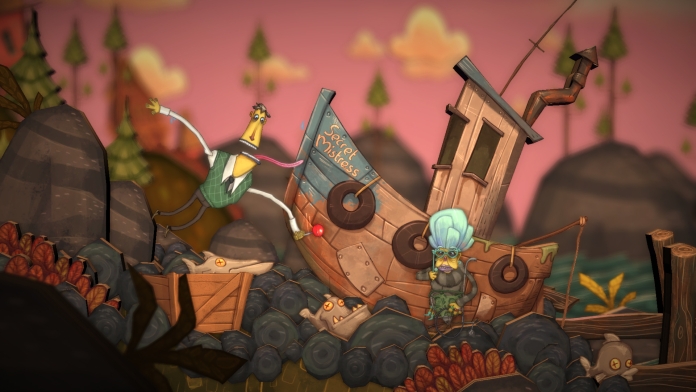 Yes, the way it’s described there may sound incredibly frustrating, but everything is actually fair, once you pay attention to your surroundings and begin exploring what everything does. Experimentation is the key to success in Flipping Death, where you’re encouraged to mess around with the bodies in each area in order to discover what they do and how you may be able to use them later in various twisted ways. And it’s no less difficult than, say, having to put a horse to sleep so that you can steal its dentures to help a mummy win a pet show. It’s kind of a case where strong comedy makes for some interesting puzzles, and vice versa. Of course, you can also just dick around with the living and get some solid laughs out of that as well, even if a few lines in the demo repeated themselves.

In terms of visuals, Flipping Death retains the game gorgeous and unique, cartoonish style that Zoink Games is known for, with both the land of the living in Flatwood Peaks and the Otherside looking colorful and twisted in their own unique ways, also featuring a cool mix of 2D and 3D visuals. The only flaw here is that it can be difficult at times to discern which parts of the scenery are platforms, and which are just part of the background. On that note, the platforming in general is solid, with the use of a boomerang-like scythe to teleport around taking a while to get adjusted to, but eventually ending up being fun to pull off. 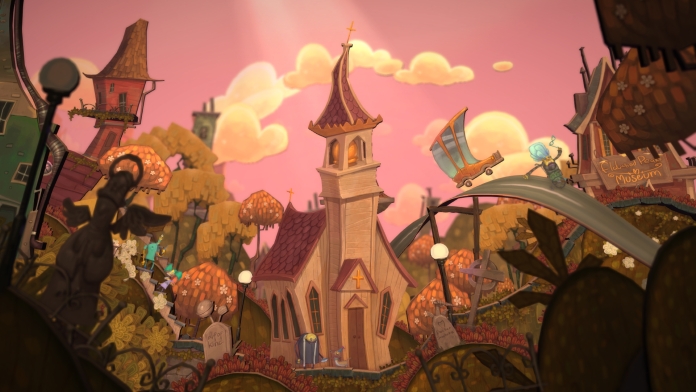 In a world where we can always use more levity in our video games, longing for the days of Monkey Island and Maniac Mansion, it’s always a treat to see a new game that utilizes bizarro logic to its fullest potential, making for some laugh-worthy scenarios with clever dialogue while still putting up some brain-bending puzzles that pose a fair challenge. And thanks to its ridiculously fun gameplay mechanics, sharp writing, and nicely twisted visuals, Flipping Death could easily wind up as another classic to stand alongside the comedic greats when it comes out later this year for multiple platforms, so make sure to keep an eye out for this unique take on the afterlife.