While it may be debatable as to whether or not Hob was the best game at PAX East this year, there was no denying that Runic Games were promoting it heavily enough to become one of the biggest games of the show. Aside from just having prominent advertising throughout the convention center, a copious amount of free swag was given away, including hats, patches, papercraft, and coloring books. So this was a game that was largely unavoidable for the most part, even when several other Zelda-esque or Zelda-inspired games were on heavy display as well. But having played more of it, it is indeed safe to say that Hob has earned the right to hype itself up a bit, as it may very well be one of the greatest indie games to be crafted from the Zelda mold so far. 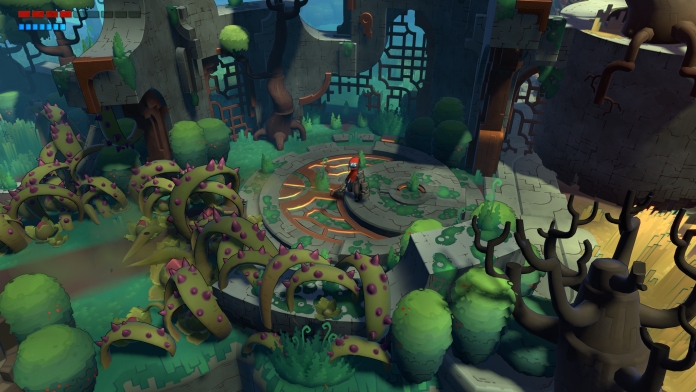 In fact, I’m just going to say it right now: I’m actually looking forward to Hob more than Breath of the Wild. Yes, I know some people consider the idea that anyone would prefer any other game to BotW blasphemy (said people being extremely annoying, mind you), but what can I say? Hob checks off a lot of boxes that I feel make for a particularly damn good game, be it a Zelda-esque adventure game or otherwise. It begins with some absolutely stunning cel-shaded graphics, which help provide a unique style to the game’s massive fantasy world, with a superb blend of ancient technology and nature around every corner. It has sort of a calm, serene feel, but also one that humbles you when you get to see the size and scope of the machinery or factories you’re working with.

There’s also the narrative, which in the same vein as other classic such as Journey, is told entirely without dialogue. You have a series of dungeons to work with, and its in here that you find clues as to what exactly happened to the ruins of this land while rebuilding it, leading to mysterious and awe-inspiring moments where, to use an example from the end of the demo that was on display, you literally raise an entire chunk of forest stored underground to the surface, providing you with a new area to explore. What was with the factories and machines here, and why did it lead to huge chunks of land being separated? Moments like those just make you thirsty for more, to see just what happens next and what the full story is. 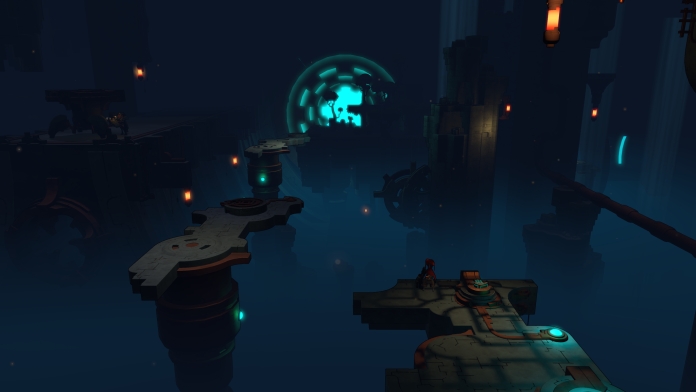 There’s also the classic gameplay, which appears to have a larger emphasis on solving puzzles here. Somewhat befitting a world with a lot of industrial areas, a lot of obstacles involve figuring out how to operate various mechanisms in the correct way in order to progress, usually through turning on the right switch, zipping around on teleporters, or pulling and pushing certain parts around with our main character’s massive stone fist, and a lot of them so far have come across as simple and enjoyable. Of course, our hero has a larger variety of skills as well, including swordplay, dashing, and teleportation, used to avoid various hazards as well as to combat the local wildlife going about its business, should they accidentally intrude upon them. In any area, Hob controls perfectly, and the gameplay has been rock solid so far.

Going over the above description, you may wonder what makes Hob stand out even more amongst actual Zelda games, or even its indie peers. Well, it may sound like a cop out, but I guess I would have to say that you basically have to play it for yourself, in order to see all of the individual elements come together so perfectly. It just creates a truly astonishing, atmospheric adventure with a world you can’t wait to explore, and several impressive details down to the simple yet amazing design of our main hero. Heck, I didn’t even get into the large amount of secrets this world will contain, having only found one of six contained in the demo. It is more than obvious that Runic has clearly poured a lot of love into this game and its universe, and that should make for a fantastic journey when it it comes out later for PC and PS4. Indeed, it earned the right to have coloring books, by god.