Having traversed the expo floor for several hours straight, it was made clear that there was no shortage of old-school throwbacks among the indie game scene at PAX East 2017. Heck, when are there not any throwbacks? But there did seem to be a small section of games devoted to capturing the feel of uber-violent ’90s action and arcade games, with Tormentor X Punisher arguably leading the pack in terms of prominence. But the one that deserved the most attention was developer Sobaka Studios’ top-down action game Redeemer, which perfectly captures the feeling of enjoyably dumb action games from that era. But of course, in a true sign of greatness, it only looks dumb…

Still, just one look at our main character up there who seemingly looks like he stepped right out of an early Image comic book alone immediately brings to mind the grizzled antiheroes of the old days. In this case, we play as Vasily, a heavily-muscled operative for an arms corporation with a high body count who, after a classic double cross, escapes to a monastery to seek peace and harmony. But when the evil corporation comes knocking again to remind Vasily of his haunted past and slaughter the rest of the monastery in the process, Vasily has to break out the big guns again (in more ways than one) and finally earn redemption by taking out the assholes who he previously helped out. A classic revenge story straight out of a cheesy action film, but definitely in a good way, with cutscenes and bonus levels suggests a deeper plot and characters with more personality to eventually show up.

But enough of the setup, let’s get to the demo that was on display. So we jump right into the combat, and this is where Redeemer wisely puts a modern spin on classic games such as this. See, if things were to be described in layman’s terms, then Redeemer plays like an Arkham Asylum game in a top-down setting. Now, the Arkham style of combat has been copied by countless modern games, and while that does get annoying, there’s a reason it became incredibly popular: It’s just damn fun. And the classic setup of dodging and countering when prompted while fighting three or more enemies at once and being able to deliver finishing blows and environmental takedowns translates surprisingly well to a more classic setup, it seems. You also get a various amount of weapons to pick up along the way, ranging from hammers to stun prods and good old-fashioned guns, all of which are a hoot to use and provide a satisfying impact, with firearms, melee weapons, or even bare fists all controlling fine. 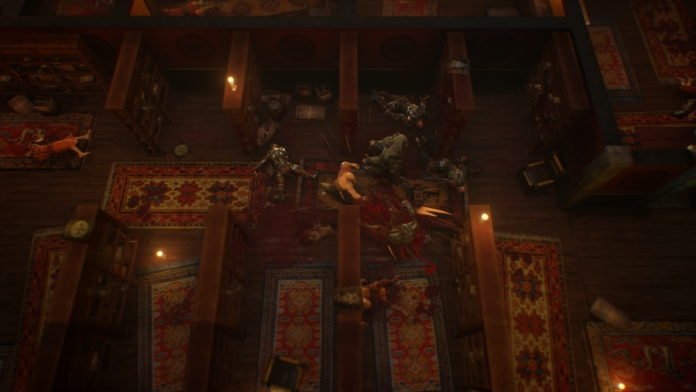 The level design was also a particular highlight, especially when it went deeper into the monastery. As brutal, tragic scenes of mercenaries executing monks play out, Vasily traverses the hallways with several different rooms to search, looking for the best routes that led to a proper approach, possibly ones with stealth kills or less enemies to get in the way. Graphically, these levels look incredible as well, nicely detailed with a good chunk of variety. Of course, the only times you truly get to see them up close are you when to pull off some special kills and shove a goon’s head into an oven or whatnot, but either way it looks quite eye-catching.

Redeemer definitely has the feel of the more dumb, over-the-top MA-17 games of our youth on the surface, but beneath all of that lies some particularly impressive combat and general gameplay, not to mention a bit of tongue-in-cheek feel with the insanity of certain kills. But that’s just my take, and perhaps Vasily’s tale ends up being quite the captivating narrative indeed. Whatever the case, Redeemer just seems like a highly enjoyable game overall, and is definitely one to keep on your radar come this Spring, when it comes out for PC.