Do you like hunting down giant monsters in video games? That’s a stupid question, of course, as Monster Hunter World’s sales alone can attest to. But if you’re still demanding even more titles that satisfy your urge to track down and tackle highly dangerous beasts, then Phoenix Labs has you covered with Dauntless, their upcoming online action RPG where warriors known as Slayers have to hunt down massive beasts known as Behemoths on a series of floating islands in order to keep the surviving humans safe. And as seen when playing it recently, it is best suited for a team of various friends and other Slayers, as this is one game that provides some mighty fine multiplayer action. 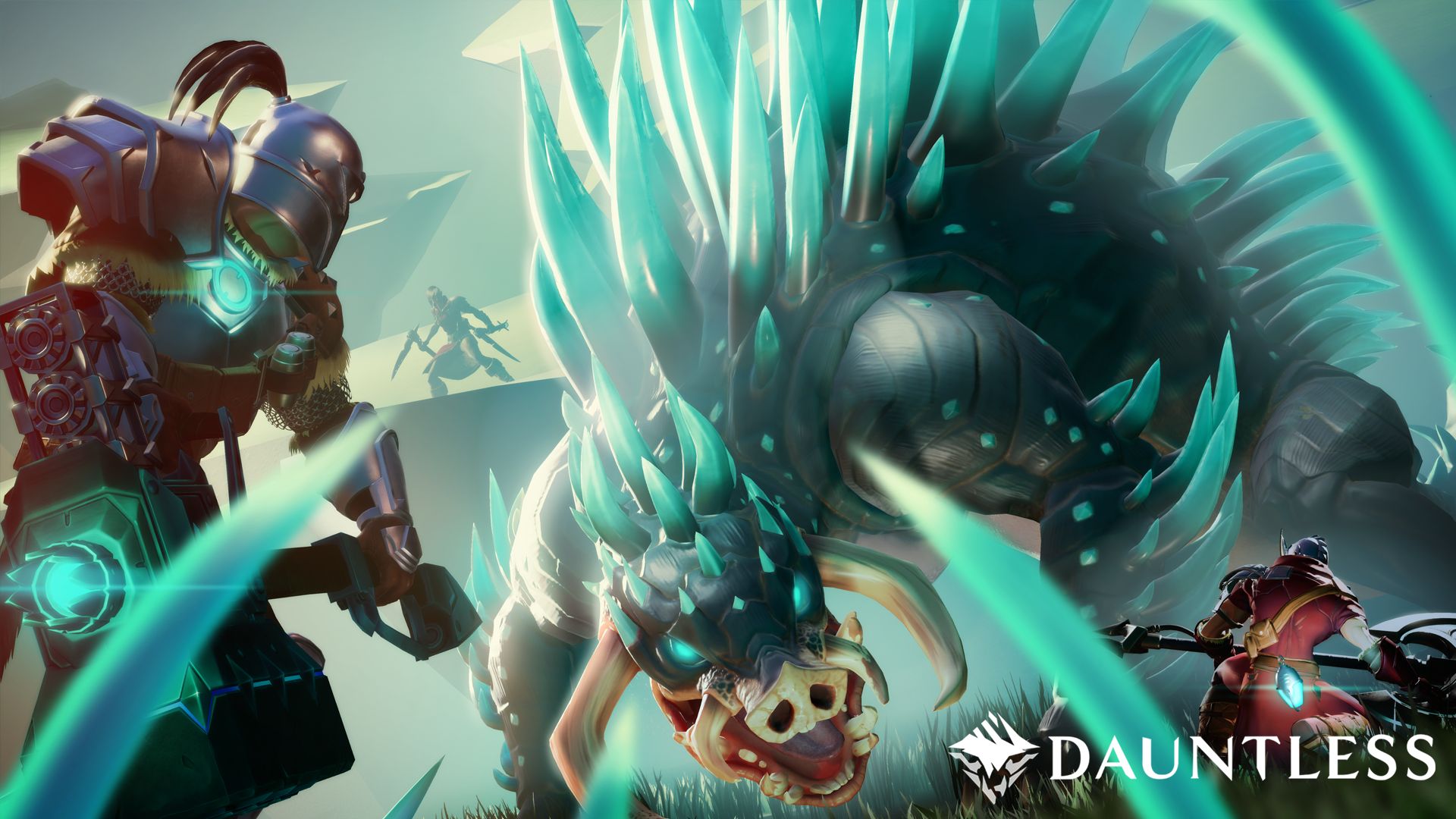 I had played Dauntless at a previous event using the Chain Blades, a weapon which alone would have probably attracted me to the game, but this time I opted to try the War Pike instead, a newer weapon described as being more surgical in its approach, delivering precise and powerful hits. The Behemoth we were going up against was the Quillshot, a giant lizard-esque beast whose main ability was…well, the name is sort of a dead giveaway. And after our party eventually tracked it down across the desert land, we immediately charged in, attempting to take it out quickly and efficiently. And naturally, the creature responded by ramming us with their quills and shooting them at us.

For the first few minutes, things proceeded as normal. Stab the creature with piercing attacks, look for the signs that it may strike, dodge when needed. But after a while, the Quillshot switched into its enraged mode, at which point its quills turned bright red and notably grew bigger. Suddenly it had a whole new method of firing quills that required constant movement to dodge, and all of its attacks became generally more powerful. After chipping away at it for quite a while, the creature finally fled off to a new section of the map, requiring us to track it down, using bits of scenery like geysers to get a view of the area and move around more quickly. 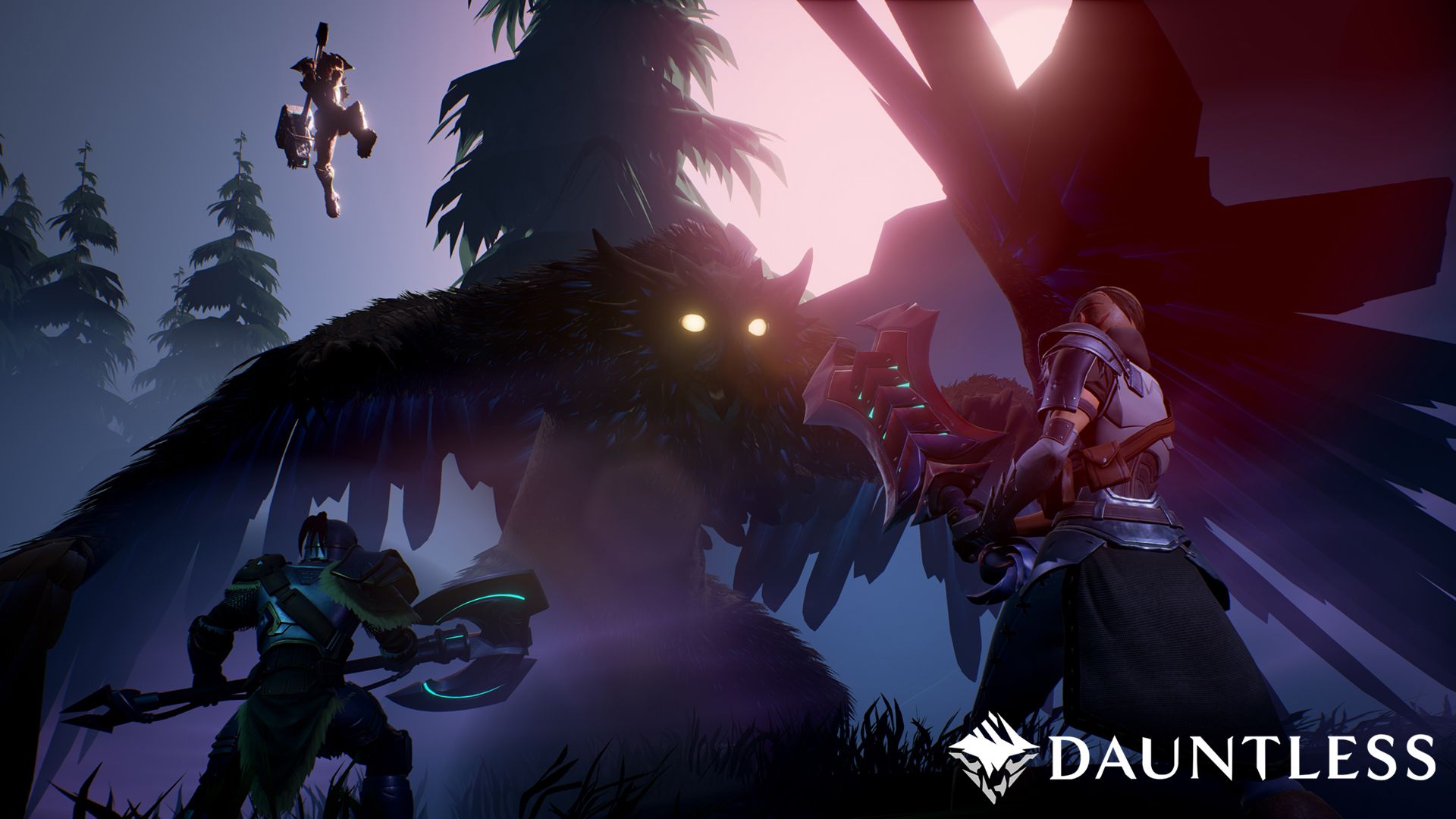 As the battle raged on, though, it became more obvious that teamwork is absolutely essential in Dauntless. There was no way to pick up healing potions in the wild, and the limited amount on me only took my character so far. There are aether wells nearby, but using them leaves you open. So part of our team needed to keep the Quillshot distracted while the rest of us got our health back. We also had to rely on team members with the ability to create areas that temporarily healed us, and the ability to revive downed comrades, again at the cost of leaving one open. Finally, towards the end, one of the other slayers began noticing where we were successfully knocking of quills, and which parts of the creature’s body were showing visible wounds and creating weaknesses. After focusing on them, the Quillshot finally went down.

It was a definite triumph for a fun match, with various little awards given to the slayers afterwards. I doubt I was a master of anything (I haven’t played a lot of similar MMO-style games in a while), but it just naturally felt like sheer joy to properly set of coordinated attacks in order to take out a rampaging Behemoth. And others won’t have to wait long to experience that kind of joy as well, since it was recently announced that Dauntless would begin its Open Beta on May 24, with a full release for the PC set later on. So for those who appreciate a good hunt, make sure to not miss out on this.