Very few game developers have the potential to get me legitimately ecstatic by dropping a trailer. When you’re inundated with press releases, demos, preview builds and screenshots, it seems like anything resembling childlike wonder is nowhere to be seen.

There’s a reason why people enjoy speaking about their favorite artists, authors, directors and developers. It’s uniquely blissful when you get the impression that there are people out there whose art feels like it’s made just for you. For me, Naughty Dog and Supergiant are the two developers that seem to speak to me on an entirely different level. In case you missed it, the latter revealed their newest title, Pyre, earlier this week. After getting a chance to play through the first demo of this bizarre RPG, it’s a joy to report that Pyre appears to be yet another wonderful experience from Supergiant Games.

After loving Bastion and downright adoring Transistor, it makes sense that Pyre, which is set to launch in 2017, would instantly fly to the top of my most anticipated games list. Still, the looming pessimist in me wondered (and still wonders) if Supergiant’s third game would be its first dud. This cognitive dissonance isn’t exclusive to Supergiant; the same question looms, however minutely, over Uncharted 4, What Remains of Edith Finch and whatever thatgamecompany will probably announce at E3. Considering that Pyre is a straight up RPG whose gameplay is centered around an invented sport whose closest comparison is the Mesoamerican ballgame meets Quiddich, initial concerns don’t seem that outrageous. However, the combination of breathtaking art design, accessible mechanics and that signature Supgergiant atmospheric storytelling make Pyre the clear star of PAX East 2016.

If you’re confused as to what Pyre is after watching its brief reveal trailer, no one would blame you. Supergiant is known for its ambiguous reveals that emphasize secrecy over full on demonstration. Hell, this is part of what makes Supergiant, well, Supergiant. The elevator pitch is a bit complicated, so bear with me here. 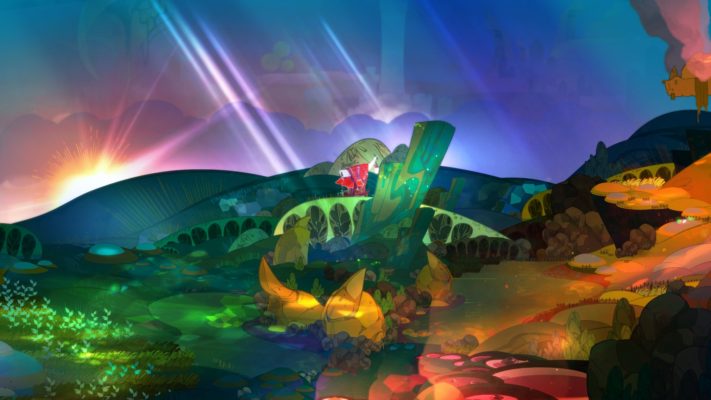 Pyre places players in the role of the Reader, a former citizen of the mysterious Commonwealth who has been sentenced to wander aimlessly for eternity. As one of the rare few with the ability to read, you inform the three warriors who stumble upon you that by competing in the Rites, the aforementioned “sport,” you can potentially return to the Commonwealth as a citizen. While Pyre certainly maintains Supergiant’s flair for the mysterious, certain nouns in the text-based portions of the dialogue can be highlighted for extra context. Yes, Pyre is basically a game with active footnotes (history teachers, this is the game for you). This tiny detail is critical, as a story about escape and redemption without explicit context would lack the sense of motivation necessary for success. This isn’t to say that Pyre is without its mysteries (quite the contrary), but it definitely dangles a narrative carrot in front of the player far more apparently than Transistor.

We all know that Supergiant knows how to establish a rich, atmospheric setting, but creating gameplay that exists outside of any conventional genre is another thing entirely. The goal of the Rites is very simple: guide players into the opponent’s flaming pyre while holding the glowing orb-ball until you reach the ten-point score limit. Your team is made up of three characters: one heavy, one light and one in between. Getting each character into the opposing team’s pyre knocks its health down by either three points, two points or one point, depending on the size of your character. Every player in the Rites has a circular aura of varying sizes, based upon his or her stature, and coming in contact with an opponents aura (or having it shot at you) will temporarily knock you out of the match (as will scoring). Only one character can be controlled at a time, meaning that positioning is absolutely critical to ensuring that you’re not left out in the cold. Successful players will know when to make a break for the opponent’s pyre, when to control a character simply to knock opponents out of the match and which character’s should be used and when. My battle against a faction known simply as the Accusers was relatively simple, with the exception of a couple of early points given up, but it’s clear to see that these gameplay mechanics have the ability to rapidly escalate in difficulty while still maintaining a level of accessibility that Transistor admittedly lacked. 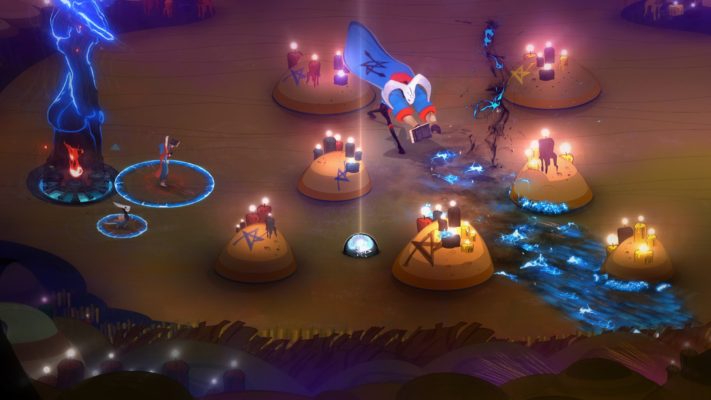 If this sounds absolutely bizarre to you, that’s because it is. Pyre is easily the strangest game I’ve encountered thus far at PAX, but it also feels more unique than anything that can be found on the market today. Of course, it helps that it somehow manages to be better looking than Transistor, arguably the pound-for-pound best looking game of the generation. Pyre sports a dazzling array of colors, and dynamic animations that manage to make some of the most impressive AAA games seem stiff and robotic. Jumping over an opponent’s aura with the smallest character at your disposal results in one of the most satisfying backflips in all of video games, which is actually a pretty impressive feat when you think about how fond this entertainment medium is for shifting characters upside-down.

I have absolutely no qualms in saying that Pyre is likely the best game on the show floor at PAX East 2016. Granted, there are two more days of non-stop gaming to be had and oodles of titles that time will simply prevent me from playing. When you consider how prone the gaming universe is to chiding a lack of new ideas in a world overrun by sequels, puzzle-platformers with a twist and open-world games that feel like virtual checklists, it’s hard not to admire what Supergiant has come to represent. This is a studio that always has a trick up its sleeve, and if the massive lines outside of its booth are any indication, the market is taking notice.