After twenty minutes of consistently travelling left for no reason, I decided to take a trek to the right. There wasn’t any rhyme or reason to why I switched my completely arbitrary movement pattern; it simply seemed like the right thing to do. As I traveled eastward, fighting off hoards of mysterious scarlet creatures, I arrived at one of the gorgeous set pieces peppered around countless procedurally generated dungeon segments. I strolled past the remains of fallen warriors and emerged at the entrance of an abandoned settlement camp. I journeyed past a number of abandoned tents before reaching the dwellings of whichever leader ruled over this humble settlement’s grounds. My curiosity was rewarded, as I found an incredibly powerful two-handed hammer capable of decimating all those who dare to challenge its might.

…and five seconds later I was instantly killed by a proximity-triggered spike trap hidden in the shadows. 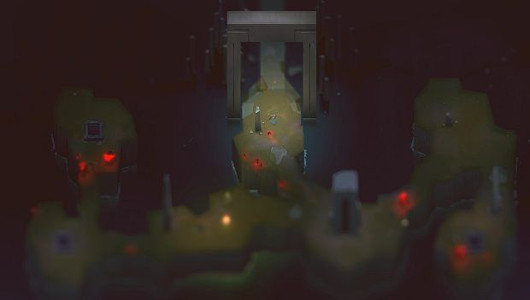 Below, Capybara’s upcoming adventure title, gives players the opportunity to do whatever they please. Nobody told me that I needed to go on an epic quest for a fallen leader’s hammer; hell, no one told me I had to enter any of the rooms I decided to explore. My story was my own, and the incredibly atmopsheric environment allowed it resonate on a profound level. One can craft his or her own emotional narrative or simply wander around killing snakes to shut them up. Below is everything and nothing; it’s both fun and deeply saddening. Most importantly, it just might be one of the best games of 2015.

While the top-down Zelda mixed with Dark Souls explanation is quickly growing into a cliche, it’s about as accurate of a description as one can hope for. Below contains every ounce of fluidity of The Legend of Zelda with the brutal level of punishment found in the Souls series. If you’ve secretly wished that A Link to the Past was a bit less lighthearted, you’ve officially found your game. Players take the role of a nameless wanderer whose only goal is to explore the caves below the mysterious island he or she arrives at. With multiple ways to die (bleeding, instant death, poison, dehydration), players have to make use of Below‘s brilliantly designed combat and ambiguous crafting system in order to survive. Every action has a consequence and each risk taken needs to be carefully thought out beforehand, as even the slightest bit of carelessness will result in permanent death.

During my hour with Below, I had the opportunity to embark on a quest with seven different wanderers. Every time I respawned I was met with a different procedurally generated dungeon, albeit with a few set pieces (such as a massive shipwreck) that remain constant. By receiving a new character and a new world, Below creates a deep sense of despair, loneliness, and mystery. Sure, a dead wanderer’s equipment might be found in the same general area he or she died in, but getting there always feels fresh. Each rebirth was met with an deeply mysterious Jim Guthrie instrumental that never ceased to make my bob my head. Because Capybara and Jim Guthrie’s collaboration efforts are so strong, Below‘s music feels as though it tells a story without using a single word. Every aspect feels as though it contributes to what might be the most immersive title I’ve seen at PAX Prime; after thinking I had played for a mere fifteen minutes, I discovered that just over sixty minutes had passed. 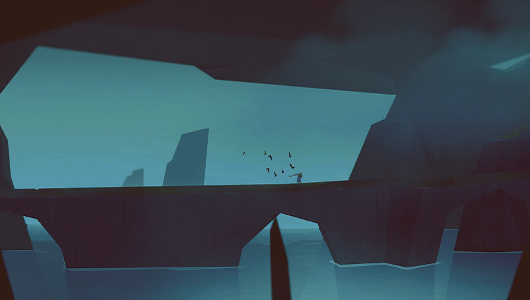 If all of this sounds like the incoherent ramblings of a madman, that’s more than understandable. It’s quite difficult clearly make sense an experience that relies so heavily on its ambiguity. Taking my experience with Capybara’s 2015 title at PAX East into account, I’ve spent over ninety minutes with Below, and I’ve yet to be anything other than blown away. The scary part is, that initial mystique present from the moment one’s wander steps foot on the beach never goes away. I’ve seen numerous fans reach areas that I never imagined were possible; I’ve witnessed some near-death runs that were nothing short of miraculous. If Capy is able to maintain this level of quality throughout the entirety of Below‘s endlessly replayable campaign, the gaming world could be looking at an honest to goodness gem.