Hive Jump is a 4-player co-op sidescrolling shooter that pits players against all sorts of creepy crawlies waiting to get exploded into bits.  We had some hands-on time with Hive Jump this weekend at PAX South, and boy did we dig it.

At first glance, Hive Jump looks like a standard pixel shooter, but there is some serious work going on behind the scenes to produce an amazing lighting effect against environments and enemies.  Normal maps have been applied to sprites, allowing Graphite Lab to light sprites as if they were 3D models.  Lasers blast through levels, interacting with and lighting up environments in ways that are truly unique to Hive Jump.  Combine that with some gorgeous and detailed sprites, and you’ve got a fascinating looking game. 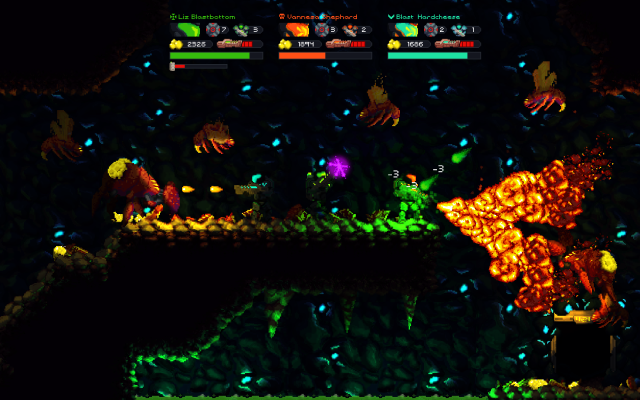 Not that you’ll have much time to appreciate the aesthetic.  The havoc that takes place on screen reaches insane levels with three other players on screen, duking it out to survive against the enemies.  In fact, you’ll probably spend most of your time early on with the game in one of two states, either about to die, or dead.  Swarms of enemies spawn from nests and attack you from all sides as you progress through the procedurally generated hives.  Occasionally you’ll get a reprieve from shooting and blasting in the form of the relic room, a premade puzzle room which challenges players’ platforming skills.  The one I encountered had me and my teammates mazing around stalactites while avoiding falling into a pit of noxious acid, and while the payoff of goo, the substance used to upgrade weapons, at the end was incredible, we suffered some serious losses in the process.

When players die, they simply resurrect at the player holding a mobile respawn point on their backs.  The backpack is absolutely necessary to make it through levels, but if the player holding it dies, it drops to the ground, leaving it open to enemy attacks.  If it falls into acid (a fate which befell my team’s backpack countless times,) it will rapidly take damage, and the only way to retrieve it is to jump in after it, putting yourself in immediate danger.  When the backpack explodes, then when you die, you’re dead forever.

Players can also upgrade to one of five different weapons which each have a distinct feel.  Whether it’s rockets, lasers, or a flamethrower, you’ll feel like your attacks are distinctly different than your teammate who chose one of the other upgrades.  The same goes for grenade modifications as well.

The final version of Hive Jump promises to include some strategical elements such as fortifying and defending hives that you’ve already conquered from oncoming enemies.

Hive Jump is developed by Graphite Lab and hopes to release on PC in the fall with a Wii U version coming later.