First off, yes, we realize that some of you may be questioning the title, dismissing it as hyperbolic and a piece of clickbait. But I’m sorry, after playing through a hefty portion of Beautiful Glitch’s upcoming local multiplayer dating sim Monster Prom, I couldn’t help but be reminded of Cards Against Humanity. No, I am not suggesting that Monster Prom will replace CAH – I mean hell, the two are completely different types of games in completely different mediums – but having played both, I felt shades of the hit card game, largely due to how gleefully insane and twisted things can quickly get.

See, for those of you who haven’t played Cards Against Humanity, the goal is for each player to use a series of cards to fill in the blanks of various, making them as perverted, insane and hilarious as possible, and one of the players votes on which player’s selections was the most entertaining, to sum it all up quickly. So while there is an overall winner in the end (or not, depending on how you play), the real goal is to just see how bizarre and risque each person is willing to go, laughing at all of the sheer ludicrousness and having fun as a group of deviants. 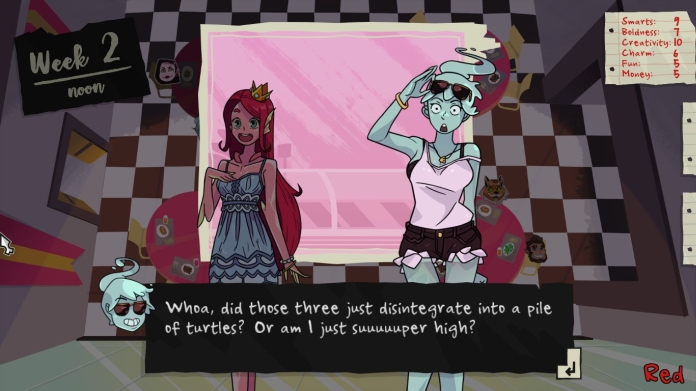 And that’s where Monster Prom draws comparisons to Cards Against Humanity, at least for me. It is basically a perfect party game with the exact same kind of “WTF” factor and enjoyment that’s best shared as a group, except now wrapped up in the packaging of a supernatural high school where you have to find a date for the prom that’s just three weeks away. After selecting your color-coded type of monster and filling out a magazine survey that determines your stats, you take turns each day selecting which area of the school to visit, where you interact with a pair of the six eligible monsters for you to woo. A scenario with them plays out in front of you, and you have to try and pick which response will work. Choose right, certain stats get boosted, choose wrong, certain stats get dropped. Then on alternating days, you select cafeteria tables containing which potential dates you’d like to impress, or to purchase items for later.

As you may have guessed, the enjoyment comes in the insane scenarios that can only show up in a school like this and the different ways to respond to them. Of course, the real fun is in seeing just what your fellow players will do, and how you go along with it. For example, one moment had a demonic bachelor suddenly appear and try to put several characters through a dating show, and you need to take care of them. Response number one was to diss them in some sort of perverted manner or such, I honestly forgot what it was because response number two was to open your mouth and shoot a swarm of effing bees out of it. How does a Frankenstein monster shoot bees out of their mouth? Who cares!! because what was important was that I suddenly found myself beginning a chant of “BEES!! BEES!! BEES!! BEES!!” in the moment where I had realized that I had gotten fully engrossed in the spirit of the game and its multiplayer aspects (for the record, the other player chose the bees, and it was the correct choice, because of course). 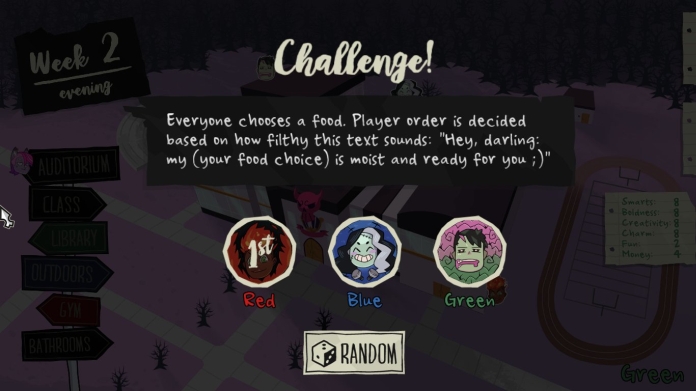 Another one of the best bits of evidence showcasing why Monster Prom makes for an amazing party game is when you have to choose the player order for the following turn/day. Sure, you could just select the option to randomly decide the order, or you can take the challenge. In this, each player names an object of some sort – film, food, company, et cetera – and then a scenario is described where everyone has to debate which of their choices works best, such as deciding the weirdest action figures that would be produced by the movies everyone chose (a line of Brazil action figures guaranteed me first pick there). It’s a particularly nice touch that causes the group to gleefully give into the insanity even further.

What particularly makes everything work is the writing, which manages to be vulgar and demented while still sharp, clever, and witty, clearly having a lot of fun with high school archetypes such as jocks, hipsters, and party girls (Polly Geist for the win, by the way). Creator Julián Quijano has actually listed The Yawhg as his primary influence, and you can actually see it in-game, as certain stories get generated depending on your responses. In one case, a player was tasked with defending Scott the werewolf from a griffin attack in the bathroom, and picked the option where they attempt to turn the beast into a plate of spaghetti via a magic spell, which worked. The next day, Scott was found with the demonic Damien discussing the possibility of opening a restaurant where they can serve pasta made from griffins (the revelation that pasta can be made without griffins hilariously blew their minds).

So while these various stories mean that Monster Prom also works quite well as a single-player game thanks to its writing, its real potential is unlocked when you’re playing it with friends, which can actually be done by passing around a single controller in a perfect bit of simplicity. Ironically, word has it that fans of dating sims aren’t the biggest fans due to the more party game-oriented elements, but they still should not miss out on such a gem when it comes out for the PC in the future. With even more kinky content to be added to he final game, this may indeed end up being the digital equivalent of everyone’s favorite politically incorrect card game.