Familiar in its setting of Karnaca and similar in its general gameplay style to each of the previous Dishonored games/DLCs, Death of the Outsider feels, well, familiar, which could be a bad thing if not for its one new ingredient — Billie Lurk’s new powers. Powers have always been one of the tentpole elements in the Dishonored franchise, and ever since the Knife of Dunwall DLC for the first Dishonored, it’s been interesting to see how Arkane changes up the abilities of each of their characters and freshens up the gameplay each time. What’s especially different this time around is that Billie’s powers have a unique origin. Her abilities come from sources other than the Outsider’s mark, an eye and arm made from the Void itself, as well as the blade that was first used to sacrifice the Outsider, so they’re much different from Corvo’s, Emily’s or Daud’s.

The three powers you’ll start with at the beginning of Death of the Outsider are Displace, Semblance and Foresight. Displace is Billie’s version of Blink. Instead of teleporting immediately as you press the button, though, Billie sets a marker in the world, and can teleport to it later. The only restriction is that the marker has to have a sightline of you for you to be able to use it. Billie does not, however, need to be looking at the marker. Displace will be something to get used to if you want to teleport away quickly, but from a tactical standpoint, it’s a great new way to time your moves. Semblance allows you to take the place of an NPC, leaving them unconscious after you’re done with them. This will allow you access to certain areas and get you past guards, but you’re using up magic as you move, and you lose your disguise once you run out. Finally, Foresight is another tactical power that has you scouting around the surrounding area as a ghost-like entity. While in this state, you can mark enemies, items and Bone Charms, as well as scout around to get your bearings of the area. 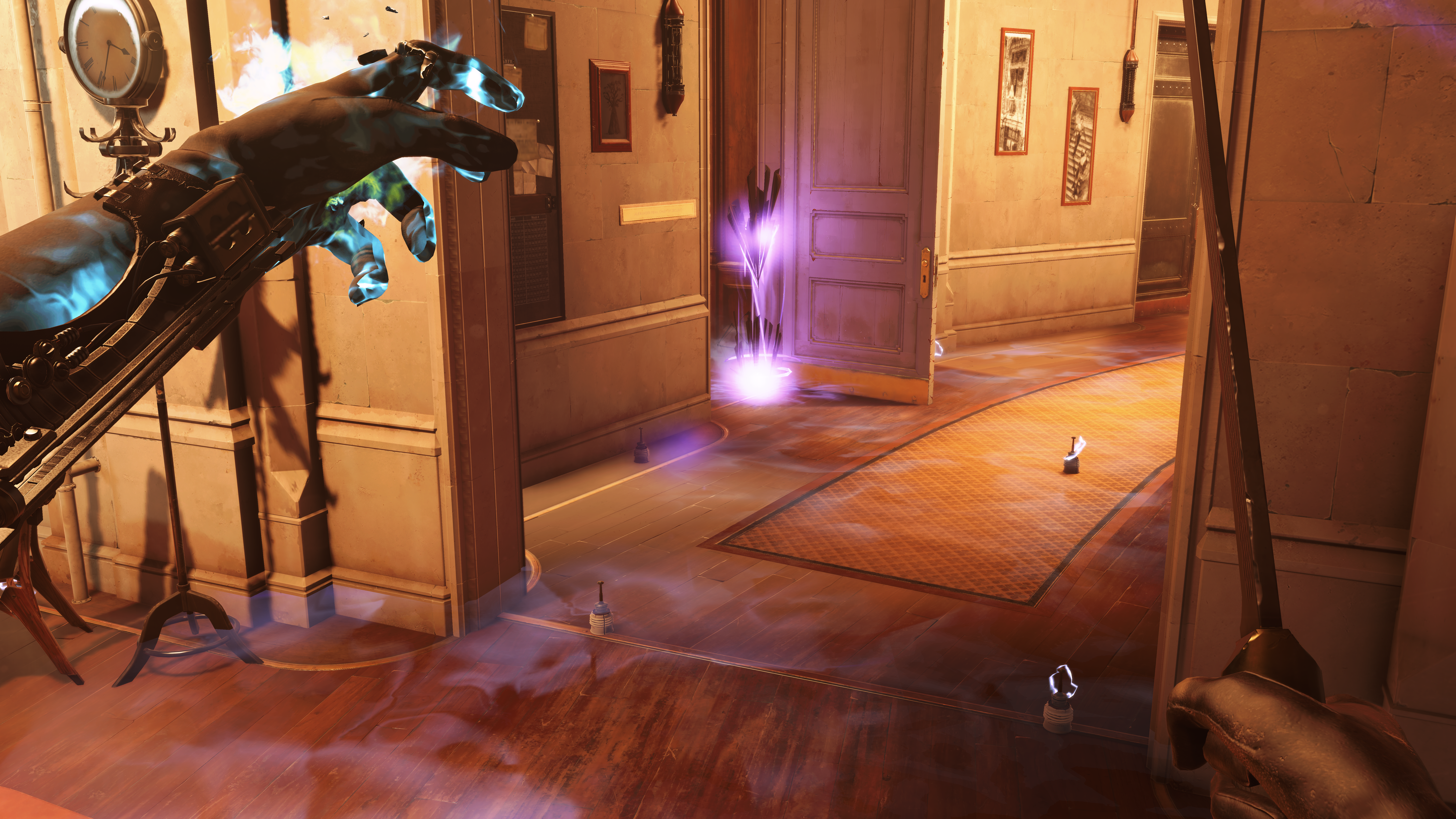 Each of the powers feel great, save for some wonky flying around in Foresight. When flying, I prefer to have the Y-Axis inverted, so hopefully you’ll be able to change that in the settings. Overall, Billie feels much more strategic than her predecessors, with abilities that have you tagging enemies, setting markers and setting things up before you execute your plan. People who are fans of a stealthy Dishonored play though will especially enjoy Billie’s new toolset.

Billie’s weapons resemble Daud’s, with a wrist launcher that can load normal and immolation bolts for lethal options and electrified bolts for non lethal takedowns. She has springrazors like everyone else, but also a new plantable device called the Hook Mine that hooks enemies and traps them there for you to take down how you please. Billie also has a lethal grenade and a non-lethal grenade called the Hyperbaric grenade. In terms of sword fighting, Billie fights just like everyone else. 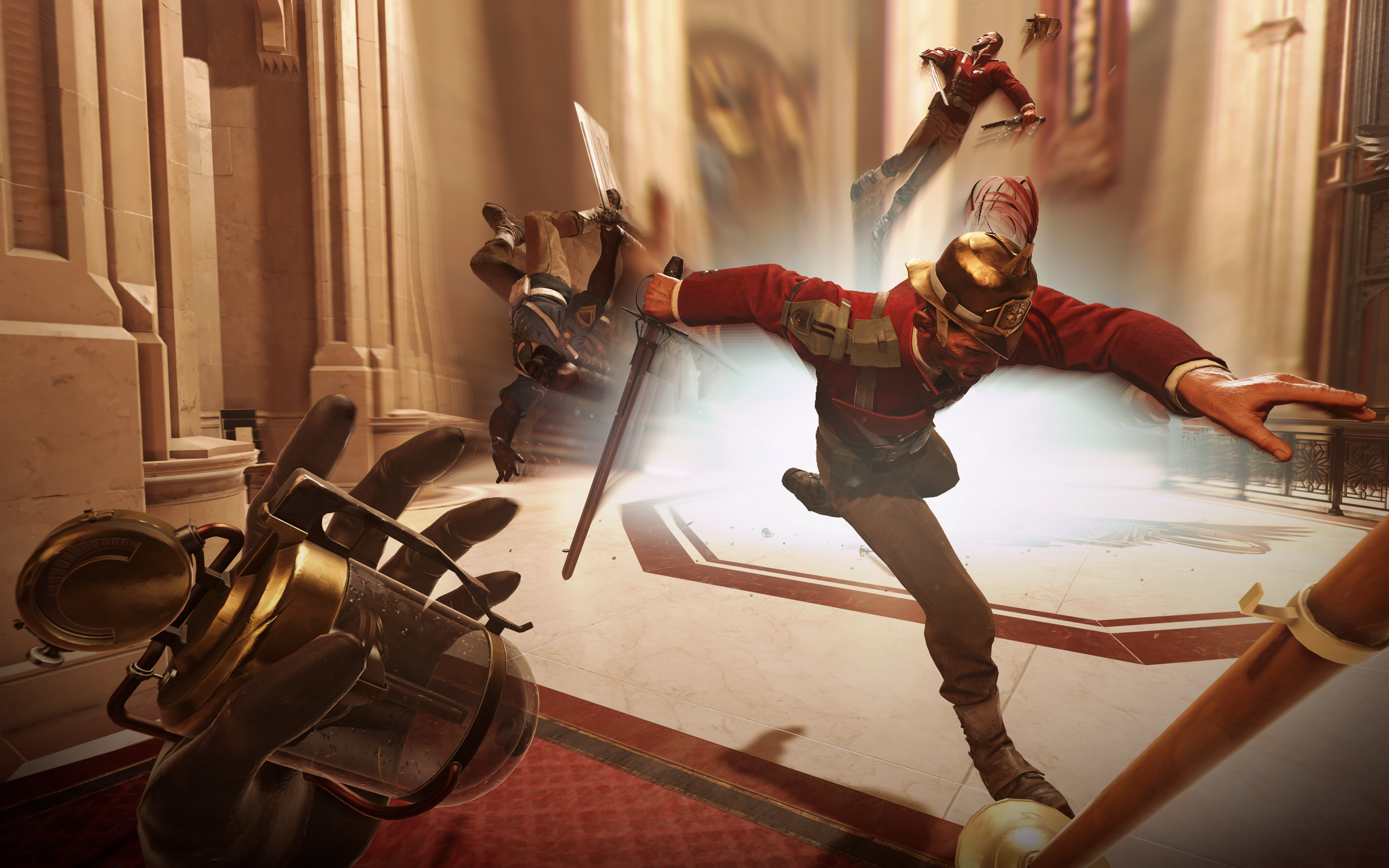 I think Dishonored: Death of the Outsider strikes a good balance in terms of feeling fresh whilst also keeping things true to the Dishonored style. It offers new ways to take on familiar obstacles with fun new powers. It captures what Dishonored is without feeling overdone and is aiming to tell an interesting new story.

It’s also worth mentioning that Dishonored: Death of the Outsider could possibly be the final act in the Dishonored franchise. The title, Death of the Outsider, hints at a clear ending to an era of magic and mystery. The Outsider not being around could strip Corvo and Emily, and anyone else touched by the Outsider of their powers, seemingly putting an end to the series as we know it. Dishonored is one of the most interesting and fleshed out game worlds in existence, so who knows, there could be a few more stories that the guys and girls at Arkane have left to tell.

Dishonored: Death of the Outsider is set for release on September 15, and will run $39.99.