The announcement of Toadman’s Immortal Unchained is great cause for celebration. The amount of gamers interested in a brutal action/RPG penned by ex-Witcher and Battlefield writers would probably fill numerous stadiums. The teaser trailer was enticing, and the amount of detail that’s already showing through in the screenshots gives credence to the belief that it will be a visual stunner, too. After getting a chance to witness a hands off demo, my hopes are incredibly high for this one. It exudes great care for design with its challenging gameplay and world.

The quickest way to describe the gameplay shown is “Dark Souls with Plasma Rifles.” The protagonist emerges from fresh from his imprisonment on a snowy mountain in nothing but some leathers and a handful of weapons. The only reason that he was released is that it is believed that he is the only one with the ability to stop the apocalypse, but his handlers must not have had enough faith in him to even invest in a shirt. Bare chested, he explores the mountainside, with only the heat of a freshly fired plasma rifle to keep him warm. (Actually, that would be a real cool mechanic for someone to steal. You’re welcome.) Carefully moving about, he takes down various trigger happy monsters from a distance, closing range to finish them off with a couple of swings from a pair of spiked maces. Once we came to an obelisk, the save and upgrade system was shown. These strange pillars dot the landscape, and are the starting point after failure. So, they’re basically Dark Souls’ campfires with some added arcane inscriptions for good measure. 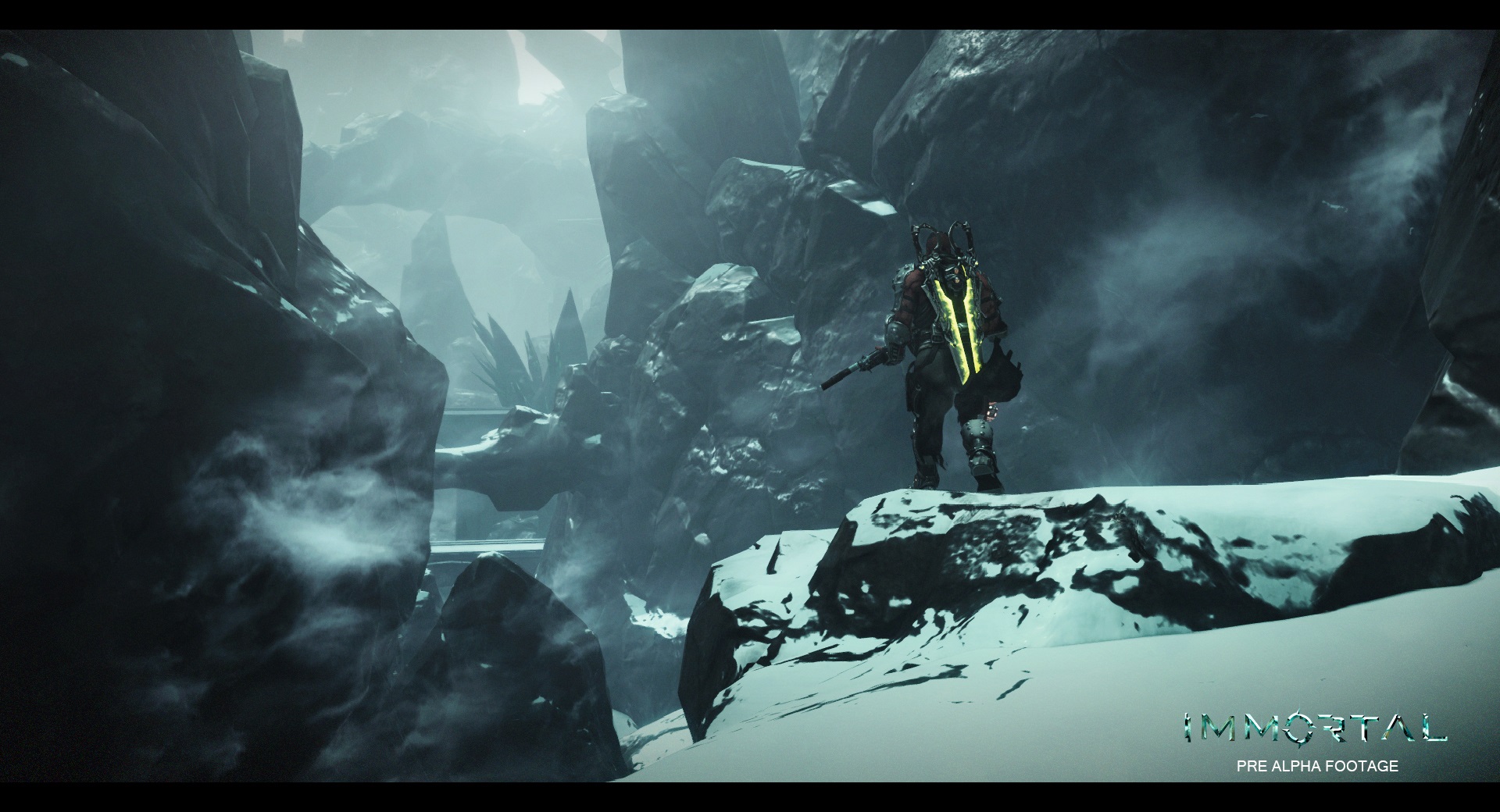 After showing off quite a bit of the cold opening area, they jumped the demo ahead to a true dungeon. It was dark here, with shadows bathing the stairs and landings in a cloying gloom that seem almost omnipresent. More combat was shown, with an emphasis placed on stamina and its management to required to progress safely. The hero also tossed out grenades like so much Mardi Gras beads in hopes of getting shielded emplacements to drop their guard. Using numerous paths, some secret and some obvious, the protagonist explored the map, taking ample opportunity to flank enemy emplacements and generally control the crowd. The PR chap handling the demo was doing quite well, even taking a moment to comment on the fact that he hadn’t died yet. This comment was followed by an ill advised backwards dodge that sent him plummeting off of the edge of a platform to role play a pile of broken bones and meat on the ground far below.

Finally, the boss was found; a hulking, armor clad knight that made the muscle bound hero appear puny by comparison. With a giant shield that fires a beam and leap attacks that can close distances quickly, it was a strenuous battle. One thing that was in the protagonist’s favor was that the foe’s stamina bar showed on screen right below his health. Many games of this ilk claim that their enemies follow the same stamina rules as the player. I often don’t believe it. Immortal Unchained shows its work, and it’s an appreciated touch. After some smart play, the boss was eventually felled and the demo was over. 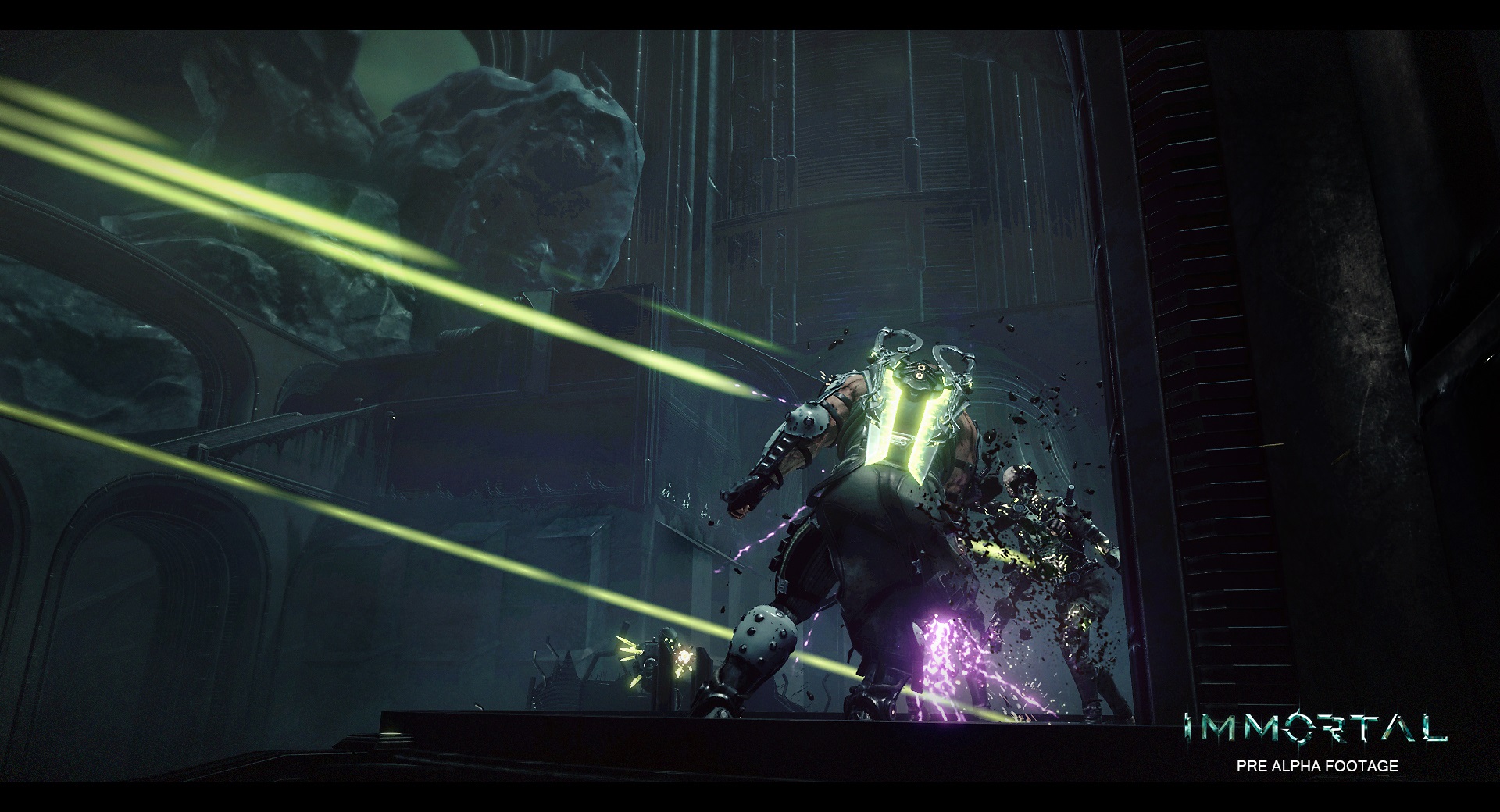 What I saw was obviously a work in progress, which much fine tuning in the works. In fact, the person running the demo pointed out that the designers enjoy moving the floor traps around for the express purposes of messing with him. Even with this caveat, Immortal Unchained looks like it has the exact type of action that I want in a game, mixing ranged, melee and “magic” skills to power through strong and aggressive foes. One thing I did not get to witness firsthand is the narrative system. One of the biggest hooks of this title is that NPCs can and will be unreliable with the information that they give should dishonesty be of benefit to them. It is up to the player to take the data that they are given and piece together the truth. Melding this type of detective work with a combat system that feels like a science fiction take on the Conan stories is exactly the type of thing that will stand out in a growing action/RPG market. Expect it to hit next year for PC, PlayStation 4 and Xbox One.