Back in 2014, Azure Striker Gunvolt made its debut to the world from the developers behind Mega Man Zero and ZX. A few years later, Inti Creates would release Azure Striker Gunvolt 2 as the series continued to gain popularity with fans. While the original focused on one character by the name of Gunvolt, the sequel opens it up to Copen who was an antagonist in the first title. Now Copen is back in Luminous Avenger iX, where he takes on the role as the new sole protagonist that characters will get to experience the story as.

The world of Gunvolt Chronicles is one filled with people known as Adepts, who are born with special powers known as Septimas. People born without these skills are known as Minos and are being hunted down before their unfair execution. Players take on the role of Copen, known as the Luminous Avenger iX to the Minos, whose goal is to protect them from the unjust world they’ve been place into. With the help of Lola, Copen is able to overcome enemy trials that stand in his way. His story in Gunvolt Chronicles begins after meeting a mysterious young girl, who will help shape his path to come. 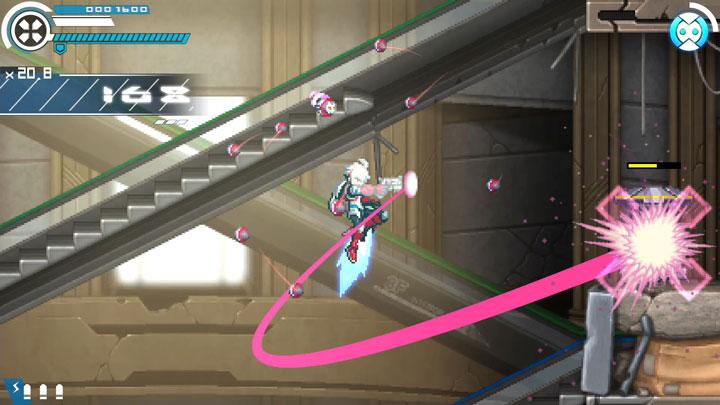 General gameplay consists of traversing through a stage and fighting a boss at the end. Like the previous title, Copen fights with a gun and can automatically lock on to enemies by dashing into them. He’s able to jump and freely float or dash in the air while continuing to target enemies along the way. Continuing to attack enemies without getting hit or bouncing off of them quickly, will increase his combo. At the end of the stage players are ranked on how well they did, and a high combo is a key part of getting a better ranking. Previous titles also had gear and upgrades players could get to improved their weapons and skills, making it worth defeating enemies in order to earn money.

In addition to dashing and shooting enemies, Copen comes with a whole slew of skills at his disposal. In order to perform most of these, however, Copen will need to use his bullit gauge. The bullit gauge is what allows him to dash and use most of his special abilities. It can be refilled over time or by quickly recharging by pressing down twice. With the help of Lola, Copen is able to defend himself with a shield from certain enemy attacks in order to reduce damage taken. Once Copen fills up enough energy he can even unleash a massive screen-clearing attack that will deal major damage to enemies. After defeating adept bosses, Copen will gain their abilities thanks to Lola’s ability to make copies of skills that Copen can in turn use to help him navigate other stages. 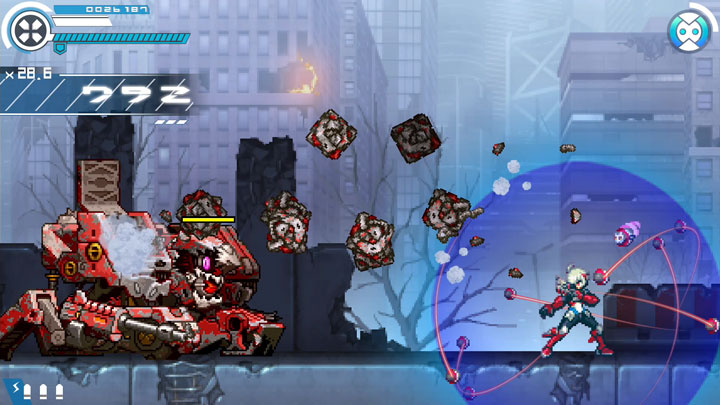 The Gunvolt series is fast paced and rewarding to play, especially for those who want to get the best rank on every stage. Replayability is what makes this series so strong and Luminous Avenger iX carries with it the same fantastic combat that made the first two so impressive. Whether trying it out for the first time or coming in as a returning player, Gunvolt Chronicles is one to keep an eye out for anyone craving some great action platforming combat. Players don’t have much longer to wait, as Gunvolt Chronicles: Luminous Avenger iX launches September 26 for PS4, Xbox One, Switch and PC.