Nearly three years ago, Atlus released an unforgettable gem of a JRPG onto the world. It had phenomenal turn-based combat, gotta-combine-them-all Pokémon-esque monster collection and a wonderfully-crafted story that spanned a play time into the trip digits. I am of course talking about Persona 5, a game that captured the hearts and minds of millions. While there’s little to no doubt that Atlus will be following it up with an indirect sequel far into the future, the team has been hard at work creating a bigger and better version of the 2017 release, much like Persona 3 FES or Persona 4 Golden. There are a number of improvements and additions to the formula and we were able to get some hands-on time with the English build to get just a taste of what has changed. We were only able scratch the surface of what Persona 5 Royal has to offer, but if it’s any indication of what we can expect in six weeks time, then there will be nothing stopping us from putting another 100-200 hours into this monumental RPG.

The vast majority of gameplay we got to check out was within Tokyo itself, but there was a little bit that took place in the shadow-infested world. We were able to take on one of the worst villains in the game once more: Kamoshida. This sickening individual is best known for his perverse and sexual abuse towards not only Ann but her best friend, Shiho Suzui, and most likely additional victims, and is the first true boss in the game. This gave us a decent idea what Atlus is doing with these encounters as this is more or less the fight we remember, just with a couple of added events. You still need to position a companion, specifically someone hard to detect such as Morgana, up in the rafters to get the jump on this vile creature, but now Kamoshida brings out familiar faces.

In our session, shadow versions of both Shiho, who is scantily dressed in a bunny outfit and a roughed up Yuuki Mishima enter the battlefield sporting a volleyball. The whole point of their inclusion is not only to draw the attention away from Kamoshida, but help prep his killshot super attack that takes form in serving up a volleyball. In the original, he’d just be able to use this move without the help of these two, but now it’s completely avoidable as you just need to take down the distractions down which seems easy as they appear to be weak to most attack types, such as physical and wind. Alternatively, you can just soak the damage by blocking the incoming attack, but where’s the fun in that? This doesn’t add a whole lot to the fight itself, but does increase the strategy required to fight the boss, modifying a powerful skill such as this to include adds. 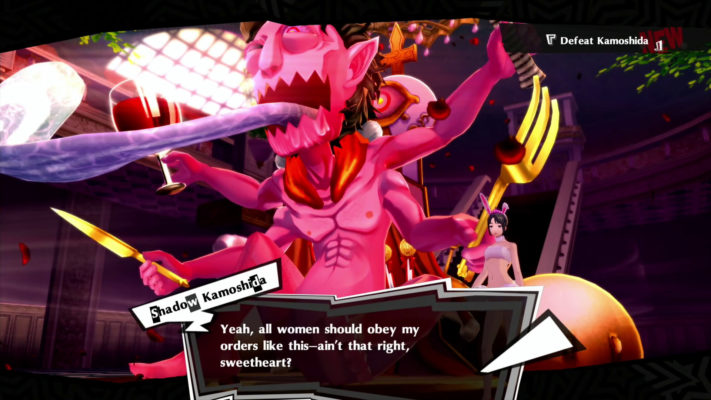 Outside of the boss changes, there have been a couple of fresh features expanded upon in the palaces themselves. For starters, a max of three Will Seeds have been put in to each dungeon. Collecting a seed will grant you a small amount of SP, which can become helpful in tight spots. These locations have been added to the existing map and in the demo we got to test them out with the newly-included grapple gun. This gun will allow you to get to new areas within the palaces for better exploration. Really, there’s not much more to it. It’s a simple button press that adds to Joker’s already inhuman like dexterity whilst moving around the world. Some of the environments have been modified to better support the grappling gun, though, as we got to test out one of the more stealth oriented areas in Kamoshida’s palace. Located outside of the final stretch of the dungeon, we saw numerous patrols that you need to get past, but instead of taking them down one by one, you’re given the option to hop to a roof and avoid the encounters all together. This is a promising addition as these areas tended to force players into battle, but now you can avoid them all together if you’re careful and bypass a small portion of the world.

Arguably the biggest addition to Persona 5 within Royal we got to check out is the Phantom Thieves’ Den. This is a location within the real world (kind of) where you’re able to go to at any point by simply accessing it through the pause menu. Here you will meet a new robotic friend named Jose who makes a smashing introduction — literally through a wall. As described by Jose, the Den is a location created by the cognitions of Joker where they’re able to relive numerous memories. Here, you’re able to purchase artwork, videos — such as real world concerts and previously-viewed cutscenes, and music with the new in-game currency (P Medals). These points are gained by obtaining awards or playing a card game called Tycoon. Here you’ll be able to sit down with your party members and have a casual or hardcore game of cards where you’re given numerous objectives, such as simply winning a round as Joker or bankrupting another player. Finally, you’re able to fully customize your palace/den to your heart’s content, including layout and placement of items that can be purchased with these medals you earn. While this seems like a simple component that mainly is a good place to idle and relax from the stress of school life and world ending encounters, I do hope there’s a little more to it and Jose in the story. It seems like a fun distraction that hopefully will be even more expanded upon in future Persona games. 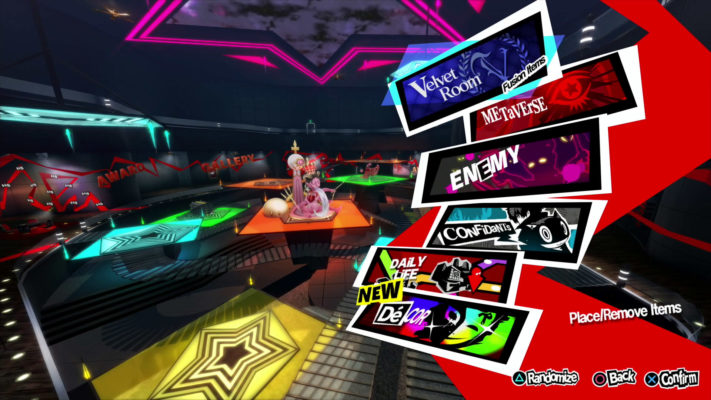 If there’s one thing that stuck out in our minds from the couple of hours we had with Persona 5 Royal, it’s that mini-games and bonding exercises are the highlighted features. While there were a couple of mini-games in the original release, most of them weren’t much to think about. You had your video games where you participated in quick time events and a batting cage that had you timing out your swings. The newly-added area of Tokyo, Kichijoji, has everything you’re looking for, such as shopping for armor and gifts, talk to new NPCs, and of course Penguin Sniper Darts & Billiards. This little area offers some activities for you to play to better your skills. Unfortunately, as far as we got to play, billiards didn’t have an actual mini-game to partake in, but instead is just an activity for your friends to bond over. Darts on the other hand is a completely different story. Here, you will use the DualShock 4’s motion controls to throw the darts at the board in your standard 301 game. It can be surprisingly challenging to lineup your shots, but no doubt easier than the real thing. These are entertaining timewasters that have the potential to increase your attributes and bond with your confidants even during the evening.

It has been almost three years and I can’t wait to sink my teeth back into the new and improved Persona 5. While we only got a brief look at Royal, everything we played offered fantastic enhancements and additions to the formula that will no doubt entice players to either replay or play for the first time. There’s just so much here, and we didn’t even get to see the bulk of it, such as the new confidants, party member (Kasumi), Personas, fusing changes and so much more. Be it the new activities, the added grappling hook or modifications to boss fights, Persona 5 Royal looks to offer more bang for your buck than ever before. My only concern now is that the original game did seem like it had one or two dungeons too many as it started to drag a bit in the end, but hopefully Atlus will be able to flesh things out and keep things interesting.

Persona 5 Royal will be out March 31 exclusively for PlayStation 4.