Anyone who’s ever held a camera knows that point and shoot isn’t going to cut it.  The frame holds an image and there are endless ways to get it wrong but only a couple to get it right.  Even the most banal scene has power when viewed properly and all the post-processing effects in the word can’t make up for a boring composition.  As a rule, though, an image is a single scene, and that’s not something Moncage is going to settle for.  Finding the right angle to progress isn’t about looking at one thing but frequently multiple similar items in completely different environments, then figuring out how they fit together.  It’s the kind of cleverness that makes you feel smart when you see it, with the added advantage of making the cozy little dioramas come to life for a moment.

Moncage is a game about a cube, but it’s a cube where each face can view a different scene.  At the start there’s only the one, with the rest of the windows showing a perfectly normal camera.  As you solve one face it frequently activates another, with the occasional scene change leaving no side unused for too long.  The first scene is just a wall of shelves with a fat briefcase in one and mousing over the briefcase causes the cursor to change to an obvious zoom-in icon.  A click and the case is filling up the full screen, then another click to open.  It turns out there’s toys inside, and when the case opened a burst of light came from the cube’s right-hand face.  Instead of the camera there’s now a scene of a car pulling a trailer on a hillside, but it’s got a flat.  The care isn’t going anywhere, but in a rare moment of text Moncage explains that you can line up the toy truck in the briefcase with the car’s trailer.  They’re both grey with a ladder down the side and when rotating the cube the perspective is angled so that the two become one.  Literally, in fact, as the two pieces glow into a single unit and the truck zips up the hill.  Where it’s then quickly stopped by the next puzzle, a broken-down bridge. 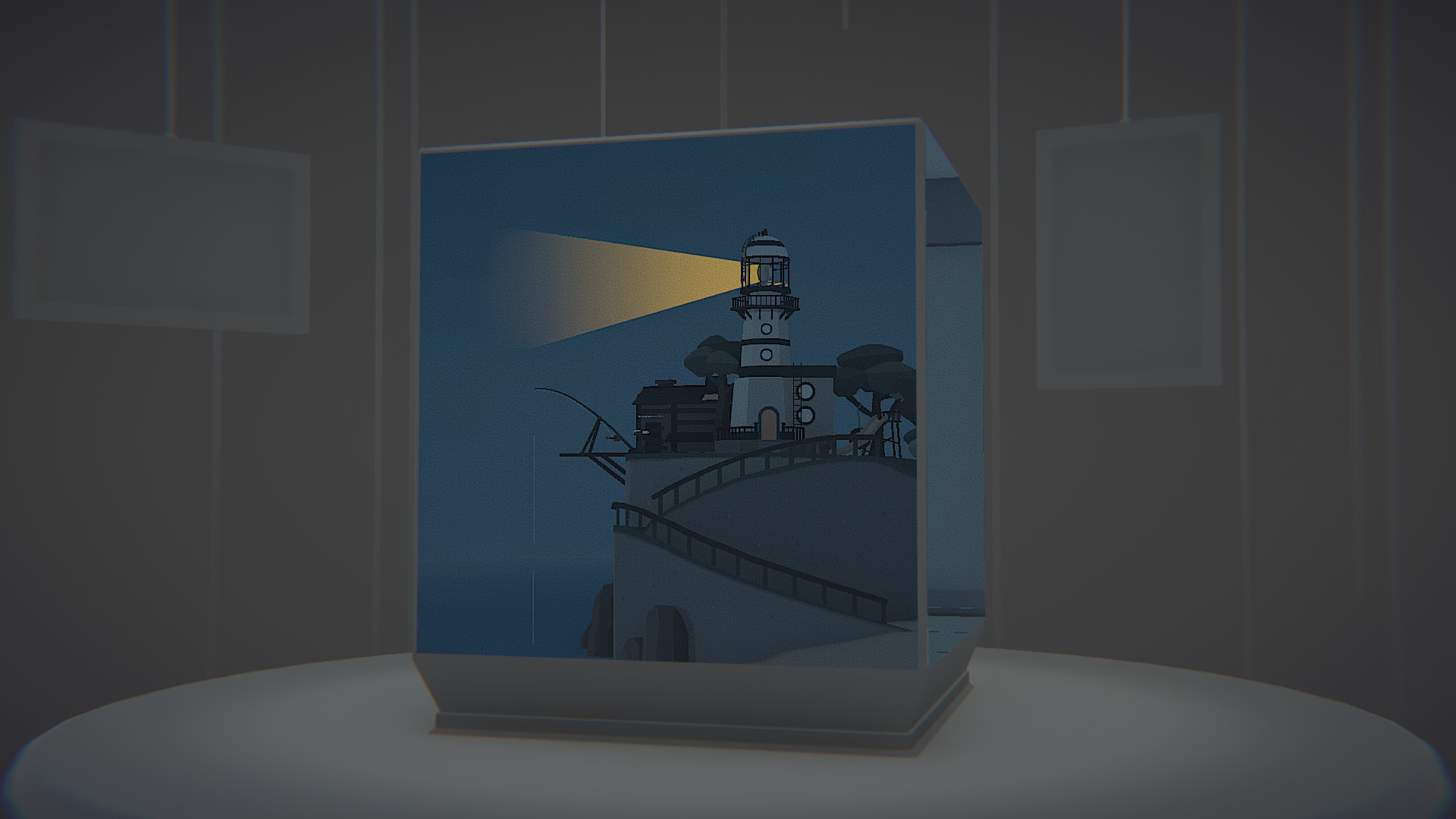 And that’s the whole gameplay loop of Moncage, except it gets trickier as scenes get progressively more filled with props.  Does a lock open by fusing it with a hand-truck?  Maybe, but they don’t line up quite right and the colors are completely different, so probably not.  Or even more deviously, maybe the pieces are spread across three scenes.  Meanwhile there are photographs tucked away in the background that give hints to the back-story, although they’re not in any specific order so piecing it together is another challenge.  Everything appears related no matter how diverse and the various scenes and storyline seem like they’ll all link up, but in the demo it’s all left as hints and unexplained almost-but-not-quite connections.

The Moncage demo is a peaceful, pretty little thing and it’s easy to forget that its scenes are all happening inside a cube sitting on a table.  I found the world fading away as I focused on each element in the various dioramas, looking for connections between them while barely even noticing that as each new picture was found it ended up in one of the frames hanging in the room outside the cube.  The Moncage demo that’s currently available for a limited time is shorter than the one I got to play a couple weeks back, but it’s still enough to make my brain hungry for more.  Everything in Moncage is connected, if you can only see the links.