We do love our alternate history tales concerning the Cold War, don’t we? It may even beat out our desire for alternate history World War II stories. It isn’t hard to understand why we love it, though, as The Cold War is associated with espionage, intrigue, tension, massive battles fought only in the shadows, and the like. So we all want to see unique takes on the era (’50s or ’80s) that play to those strengths, since it obviously seems like it would all make for captivating fiction, especially when it comes to video games. Here we have Good Shepherd Entertainment and developers CreativeForge Games with Phantom Doctrine, a turn-based strategy game set in 1983 where you’re tasked with uncovering a global conspiracy. As mentioned before, this is apparently the team’s most ambitious project yet, and it sure does show.

Playing as the organization known as The Cabal, build had us controlling a team of three agents as we infiltrated an enemy building to retrieve some information. As is the case with a lot of games such as these, you’re given the choice concerning how to approach the situation, be it guns a-blazing or the more stealth-oriented approach. I opted for the latter, preferring takedowns and moving around in silence, which worked at first, but as this was a portion of the campaign designed to show all sides of the game, things quickly went south as a gunfight broke out and we had to make it to the extraction point without dying. Either way, though, things were nice and tense, the basic gameplay was fun and easy to learn with the standard setup of various action points for the characters to use each turn, and the visuals created the perfect mood for a spy caper. 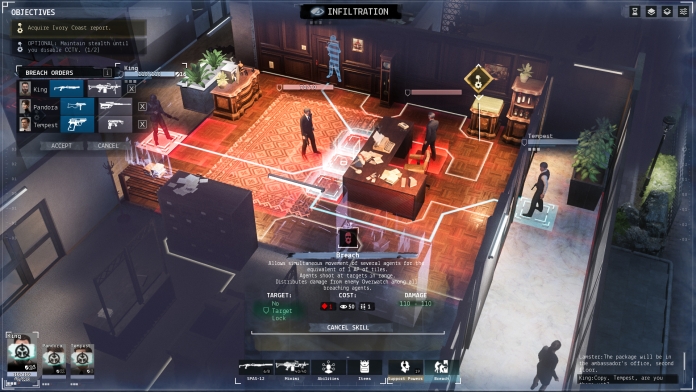 Now obviously, a turn-based isometric espionage strategy game is going to draw some comparisons to Klei’s Invisible, Inc. But Phantom Doctrine does have a few subtle tricks to help it stand out. For one, you have access to a lot more manpower and unique resources, as well as different character traits. To bring up an example, one of the characters we were playing as was an inside agent, allowing them to walk around most areas in plain view undetected, also making then the best for hacking local computers. You can also call in unique assists such as snipers, who can pick off enemies if they have a clear shot. Even attacking via firearms is unique, since after choosing which gun the current character will use, you actually get a view from their current position in relation to the target you want to hit, given you a better look at the odds they have of hitting their foe, or if anything is in their path. It’s cool touches like this which help create something fresh as a whole.

The most interesting parts of Phantom Doctrine seem to take place outside of the actual turn-based strategy segments, because in between those parts, you head back to the base to manage your espionage organization. Here you can perform a multitude of tasks, from simple stuff like hiring and training new agents and sending them out on quick recon missions by themselves to more exotic techniques such as experimental techniques on agents in order to boost their abilities and being able to brainwash captured enemies and implant them as moles. The most interesting part for me was going over the intel gathered, which involves having to place documents on a bulletin board, go over them, and connect them via strings based on keywords and codenames you discover. It seems like a minor detail, but damned if I didn’t find it enjoyable. 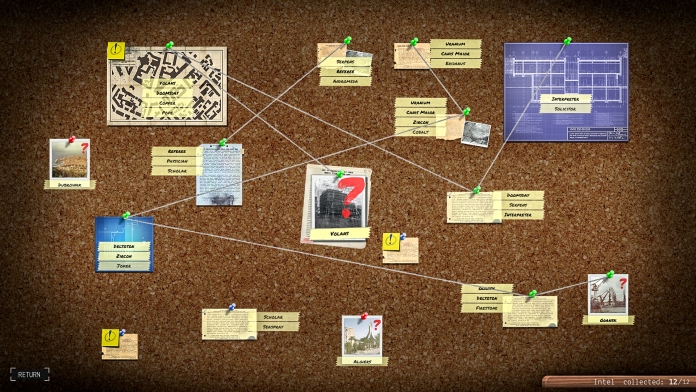 Everything in Phantom Doctrine seems to be coming together to perfectly capture the experience of being in the espionage business during a particularly shady period in the world’s history. Even if you’ve experienced several other alternate takes on the Cold War before, this is definitely one that fans of such fiction need to check out, along with strategy fans in general (or anyone, really). So much like The Cabal’s agents, make sure to keep your eyes peeled for this game when it slips on to your radar next year for the PC.