The wilderness is a messy place.  Trees and bushes grow wherever they can drop roots, hills arrange themselves with no sense of order and exploitable resources are scattered about at random.  It’s amazing the modern world exists simply because so much of humanity’s potential is lost in the focus on logistics.  On the plus side, anything done once can be done again a little more easily, and Satisfactory‘s Ficsit Corporation knows we’ve got the potential to repeat centuries of mankind’s greatest efforts all on our own thanks to the advances of modern technologies.  There are planets in the universe simply covered in unused potential, so Ficsit sends out anyone who wants to try and make all that natural splendor do some good.  Armed only with the resources scavenged from the drop pod, a resource scanner and a handy chisel, you’ve got a planet to call your own that only needs to be paid for with a few simple requests from your sponsor corporation.

Satisfactory is a factory-building first-person adventure on a wild planet where the object is to get bigger and better tech by combining the available resources into ever-more-complicated items and shooting them into space.  After the open beta last year it launched into Early Access in March, and last week got its first major update adding new toys to an already-impressive toybox.  The major additions are mostly end-game content for as far as the game goes at the moment, but also with a good number of bug fixes and quality-of-life tweaks that are all part of turning a work in progress into a finished product. 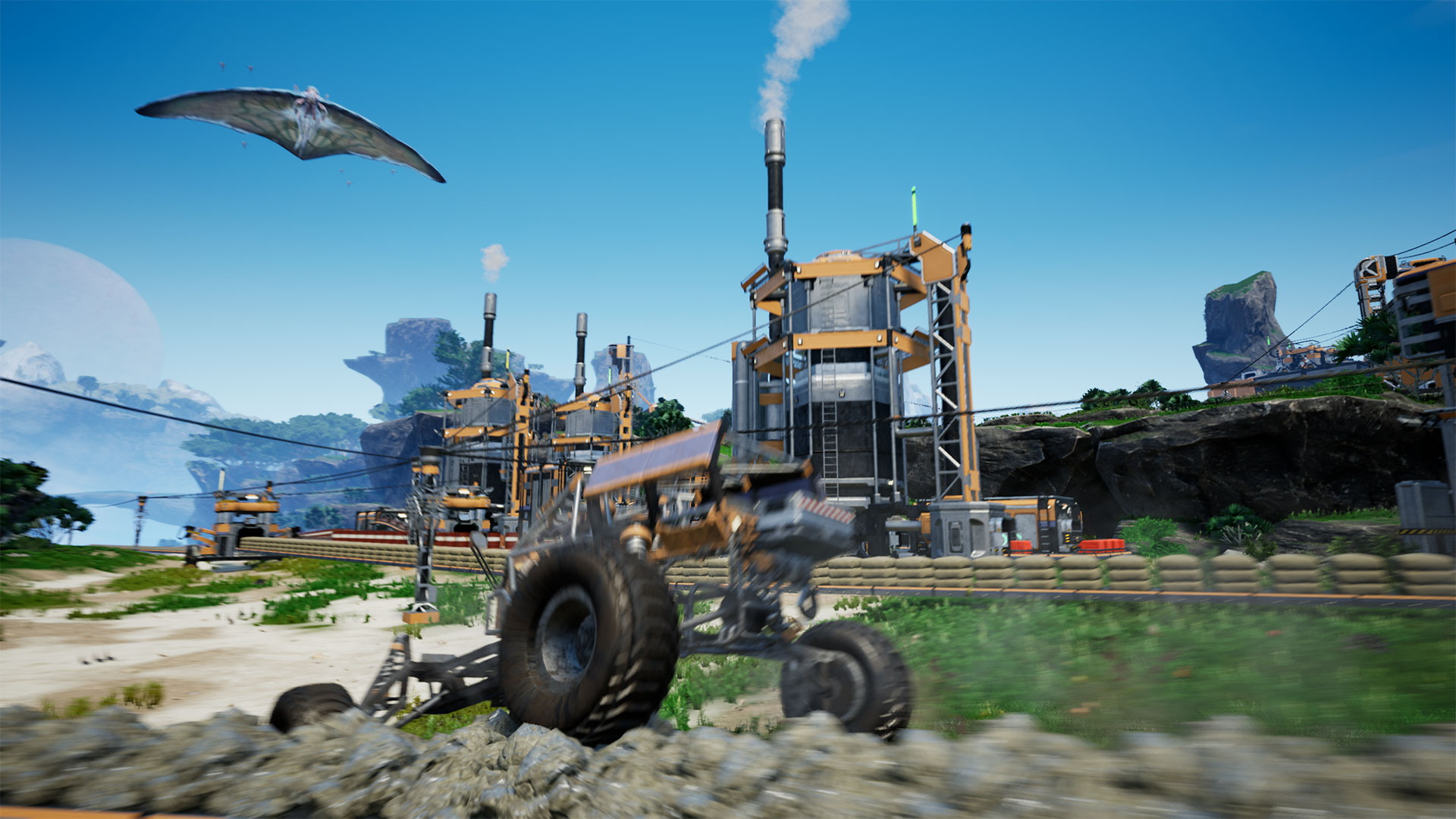 The start, though, is roughly the same as it always was.  All you’ve got is a small pile of resources to build the framework of a base and hitting production milestones will earn a reward from the Ficsit Corporation of new tech.  Ficsit won’t actually send you anything beyond information, so earning something like a bigger metal stick to bash the wildlife with means you still need to build it yourself, but once production ramps up it’s not too hard to turn the plans into something usable.  At least in the beginning, that is, when the stages of production are fairly straightforward.  A few common iron deposits are all you need to start off, soon followed by scarcer but still plentiful copper and limestone, and then things start getting complicated.

Raw metal needs to be processed into ingots in a refinery, which then needs to connect to a constructor to turn the metal into useful parts.  Iron can be either a rod or sheet, while copper is used for spools of wire, but these are all fairly useless on their own.  It’s a good idea to carry around a nice supply of these basics to turn into buildings like miners, smelters and constructors, but they can also be refined and combined into new parts.  Send iron rods through a constructor to get a nice supply of screws and then send the screws and iron plates into an assembler to turn them into reinforced steel plates.  Ficsit is starving for a huge amount of parts, with smaller loads sent up on a shuttle and earning specific tech upgrades while the gigantic orders require the construction of a space elevator.  It doesn’t take long before the volume of requested parts requires breaking out the logistics, calculating the most effective way to construct items of multiple parts while also creating a nice stockpile to use in other projects. 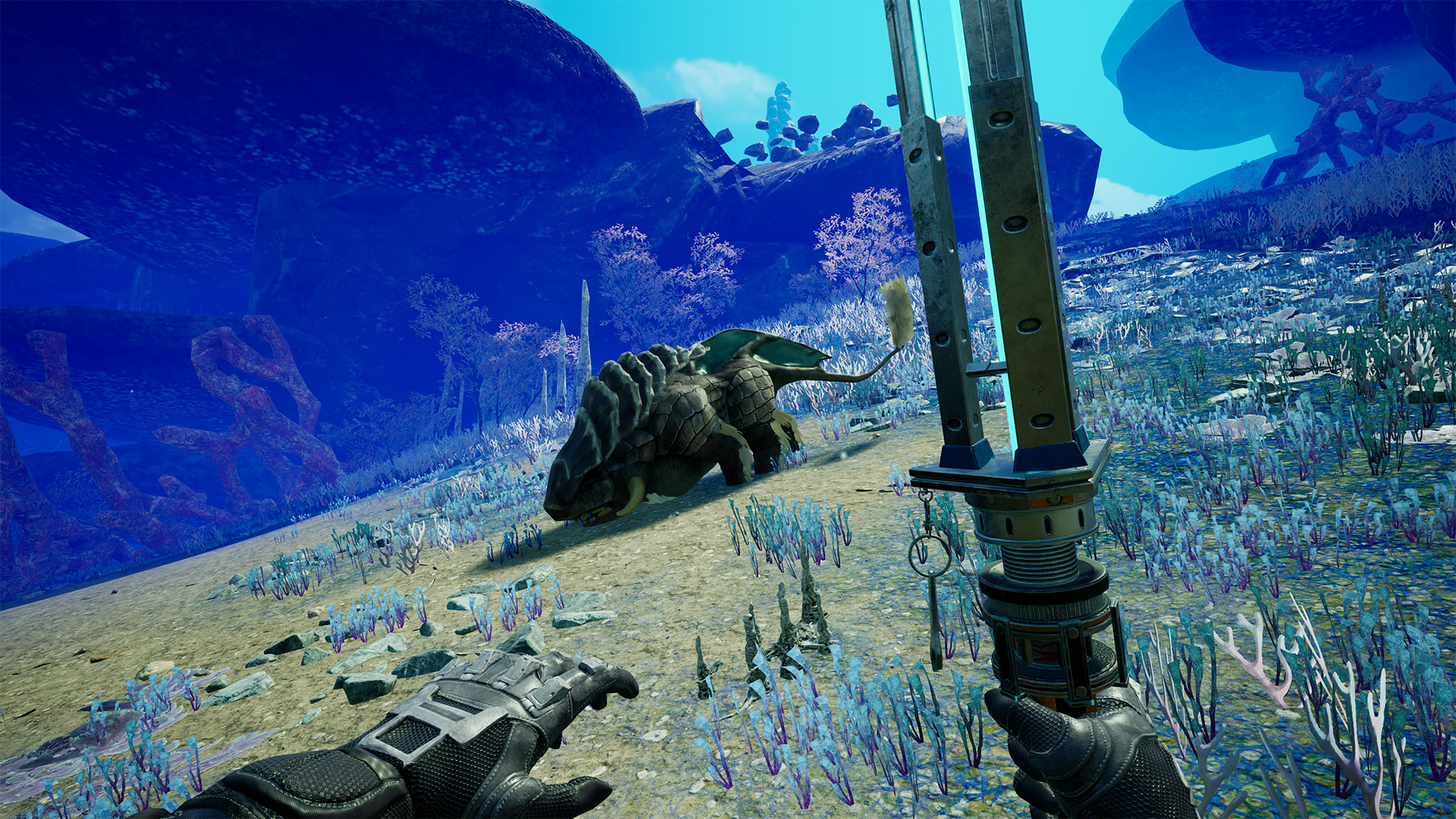 The early-tier items only need what you can find lying around, but mid-game and later requires exploring the hand-created map for the scarcer goodies.  Coal is useful both to combine with iron to make steel and also to burn for power, but depending on where you set up home base you may need to go adventuring for it.  Oil and quartz are an even farther trek, and there are hostile creatures wandering the forests and twisted landscapes along the way.  Bonus items like energy slugs (literally giant glowing slugs you can convert into energy crystals to overclock buildings, making them produce faster) are frequently guarded by a handful of critters or alternately are set on top of cliffs requiring careful platforming to reach.  Randomized maps are all nice but there’s no denying how focused a hand-built world can feel, and while the main goal of Satisfactory is to manage the logistics of an ever-more-complicated series of production challenges, going for a stroll chasing after secret deposits of whatever you can turn up is always a good time.  Plus while you’re out taking in your new homeworld the machines keep ticking away building things, making it much easier to reach the next production goal when returning to base.

All that content was available before last week’s update but now there are new goodies to make life more interesting and factories more complicated.  One of the biggest uses of space is with conveyor belts, shuttling goods from place to place whether that be measured in centimeters or miles.  There’s no reason to waste much space between the output of a miner and the input of a smelter, but frequently the refined product needs to get around an inconveniently-located constructor or even all the way across the map.  Now there are conveyor lifts, so instead of needing to build a spiral to get down a cliffside you can just dump a resource-elevator in place.  The new building of the radar tower helps fill in the map, and explosives earned by mining sulfur is handy, but production efficiencies make the world go ’round.  The new Explorer-buggy is a ton of fun to race around in and as a nice bonus its carrying capacity isn’t bad either.  There’s also a new rifle, which is the first weapon-type weapon instead of something cobbled together from spare construction parts, but I haven’t found a reason to build one yet.  Most monsters go down with a few careful swipes of the powerful Xeno-Basher, and maybe I could shoot down the flying mantis soaring majestically through the air to see if it’s got any resources, but just because I’m a walking ecological nightmare doesn’t mean I have to play as a bloodthirsty ecological nightmare. 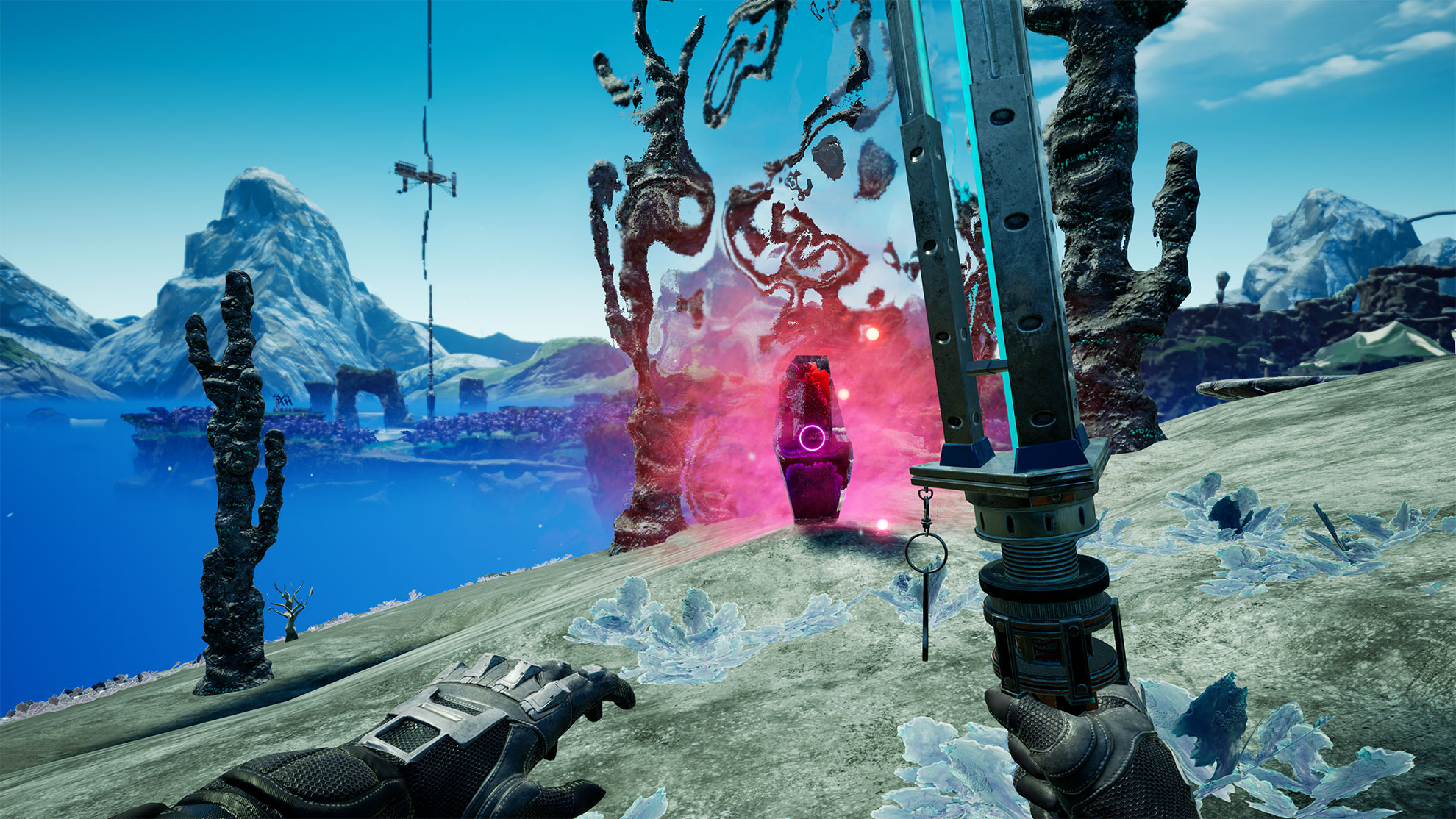 As for the future of Satisfactory, the latest roadmap blog post indicates plans for a late-June update, subject to change without notice due to the developers taking the deeply reasonable approach that it’s best not to kill themselves now when there’s so much more work to be done later.  Trains, nuclear power and aluminum are on the way, with plenty of as-yet unrevealed upgrades to go with them, and after that it’s hard to say.  Currently, however, the game straight-up murders hours at a time without the slightest hint of mercy, always having something to do and frequently switching between gameplay styles to do it.  Tearing down and rebuilding home base is a different experience from following the tracker to a rare ore deposit, and sometimes it’s nice to head off into the wilds without a plan just to see what’s there.  The content to come will add to the end-game, place new creatures in the wilderness, put in a complete narrative and add mod support, but the existing core of Satisfactory is already there and it’s to build a machine that works.  It may be messy, take up too much space, and be utterly confusing to anyone who didn’t actually construct it, but when you’ve got dozens of buildings all working in sync at peak efficiency, Satisfactory lives up to its name.