With nary a few days until release, it’s hard not to be excited for the release LEGO Lord of the Rings. This is the next game in the LEGO series and based on the literary works of J.R.R. Tolkien. Many played with LEGOs during their childhood (and maybe still) and read Tolkien’s stories/seen the movies, so why not combine them? You’ll get the best of both worlds. Whichever way you’ve been exposed to the creative world of LEGO blocks and Lord of the Rings, seeing them come together will blow your imagination away. 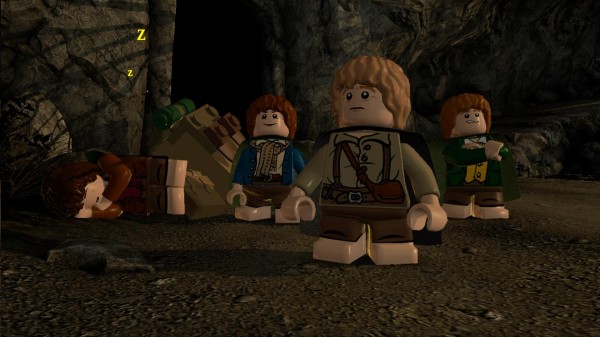 I’m sure you know the story: a band of warriors fight together to destroy an evil, magical ring. However, it’s not the story that matters — it’s the journey. Take control of Frodo Baggins and the Fellowship as you travel through Middle-earth in order to vanquish the ring. Slashing up Orcs and other beasts is fun but doing so as Aragorn or Legolas is so much more enjoyable. There are over sixty confirmed playable characters to choose from, so if you want to be some of the bad guys, go for it! Special abilities are assigned to certain characters; Gimili, for instance, is able to be thrown at things. In addition to skills are specified weapons, with the Elven rope, tinderboxes, and the Light of Earenil three of the items allowed to be used by characters. Actual voice work from the movies is even supplied to the actor’s LEGO counterparts— a series first. Let the chills run up your spine as Gandalf calls out, “You shall not pass!” Including actual dialogue gives the entire game a cinematic feeling.

Given that this is an RPG, there will be elements similar to that of Skyrim or Final Fantasy. There is an open world to explore that includes locations from each installment of the trilogy. It would be a rip-off if we weren’t allowed to go from the Shire all the way to Fangorn Forest and ultimately ending on Mount Doom. No need to wear out your plastic legs, however, as those who don’t want to make the trip can fast travel when possible. To fulfill this epic quest, players are allowed to power-up weapons and even create them using a blacksmith feature. There’s also room each LEGO character’s inventory to grow which allows for some pack rat mentality. You never know when you’ll need a shovel, so good thing there’s one in your pocket.

A classic piece of literature and film mixed with the humor of LEGO brings fans of all ages together. Both children and their parents will be able to enjoy this game, not only for its multiplayer mode, but because it has historical and contemporary significance to the video game community. It will satisfy old fans and attract a new audience all at the same time. I’m sure this will keep mischief makers and trick-or-treaters indoors at the end of October because LEGO Lord of the Rings is a treat of its own.