Russian Subway Dogs might sound like an incredibly silly, nonsensical game just by its name. Interestingly enough, it’s actually based on a real world phenomenon where dogs have taken to Russia’s subways and actually ride the rails. This gets them to more populated areas where they can then successfully seek out scraps. Of course, having some basis in reality hardly means that the game itself will push for any amount of realism. The game is absolutely an arcade-style single screen experience with simple-to-learn mechanics. 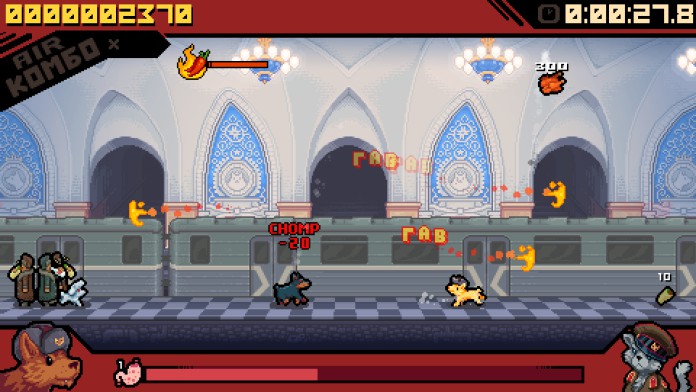 It also holds true from the original release of Russian Subway Dogs if you ever played that. It was initially created as part of the GDC Piratekart by Spooky Squid Games. As fun as that free download was, the new version promises to be so much greater. Players assume the role of an adorable pooch in search of food. As people walk by in and out of the station, you can run into them to knock some precious food from their bags. With that said, the subway is jam-packed with more than just people stocked full of grub.

It’s actually a dangerous place. For example, you might run into a subway bear because why not! Other annoyances such as pigeons also take to the station in hopes of getting in your way. With that said, our trusty dog has some skills up its sleeve. Collecting items on the ground sometimes results in special skills. For example, ingesting hot sauce leads to suddenly being able to spew fire. In many ways, Russian Subway Dogs comes across as a 2D beat ‘em up, but with more focus on collecting than beating down everything in your path – though sometimes that becomes necessary. 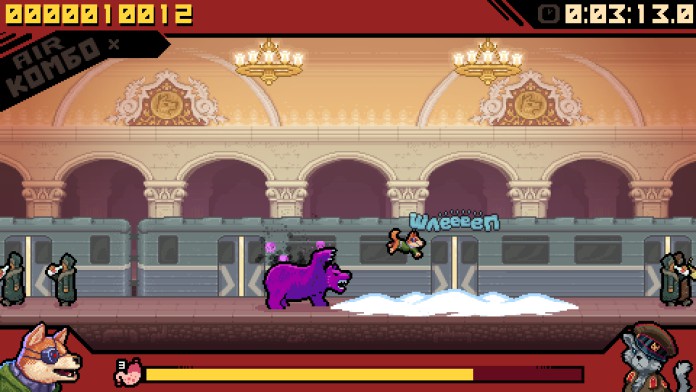 Alongside all this silly action is pixel art which perfectly complements the game. The artwork pops with bright colors and tremendously expressive artwork. If you don’t much care for the default doggy, then you can even swap them out for other designs and creatures. Checking out the other characters reveals a lot of crossover characters. For example, Ratcoon from Ruin of the Reckless and Nacho/Red Shiba from VA11-HALL-A are also playable.

With simple gameplay comes simple controls. As such, Russian Subway Dogs makes a perfect fit with the PS Vita, which it will be releasing on in 2018. Yep, indies are still showing that awesome handheld love years after Sony themselves have moved on. Those who may have already gotten rid of their Vita can fortunately still jump in. The game is also set to make its debut on PC (Windows and Mac) as well as the PS4.