In the majority of fiction over the years, the portrayal of pirates has always been weird. Historically, pirates were ruthless criminals that engaged in what most would classify as reprehensible acts upon their victims. However, in popular culture pirates have been heavily romanticized, so much so that pirates are common heroes in fiction targeted at children. The pillaging, rape, and murder are largely ignored, while other aspects such as pirate speech, rum, singing, and a scrappy rebellious attitude have come to define pirates in modern pop culture. In the realm of games, things like the Monkey Island series, The Legend of Zelda: The Wind Waker, Sid Meier’s Pirates, the recent Assassin’s Creed IV: Black Flag and many others all portray pirates in this manner. 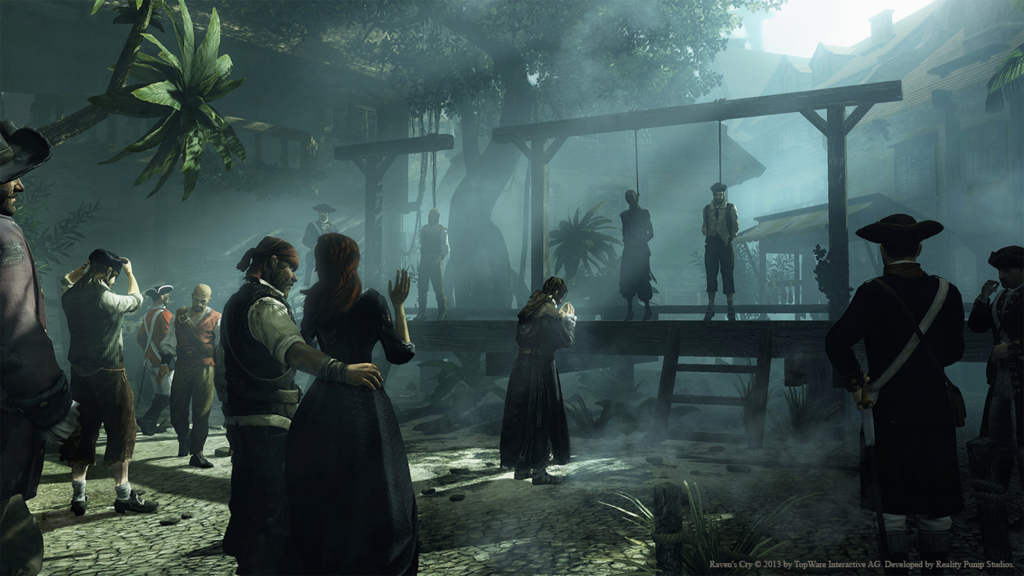 Raven’s Cry is an upcoming action adventure game from Topware Interactive that aims to show pirates in a more authentic light, portraying the more unsavory aspects of historical piracy. As such, the game will be a much darker, grittier, and mature take on the life of a pirate. The game’s main character, Christopher Raven, has been described as an “anti hero on a quest of revenge,” which definitely seems like a premise suited to this darker and more brutal vision of 17th century pirates.

Raven’s Cry has been in development for quite a while, and it’s safe to say there have been bumps in the road along the way. The game was first announced all the way back in 2011 and was originally slated for a 2013 release. Throughout the course of development, Topware Interactive became dissatisfied with the progress developer Octane Games had made, so the entire project was handed over to Reality Pump Studios in August of 2013. Reality Pump is best known for the Two Worlds games, the first being a deeply flawed game with some interesting ideas while the second came much closer to executing on those ideas and was considered by many to be a solid RPG.

When Raven’s Cry releases, Reality Pump will have had less than a year with the game, so concern about the final quality is certainly warranted, though hopefully the strides the developer made with the Two Worlds games can aid them in taking Raven’s Cry down the home stretch. 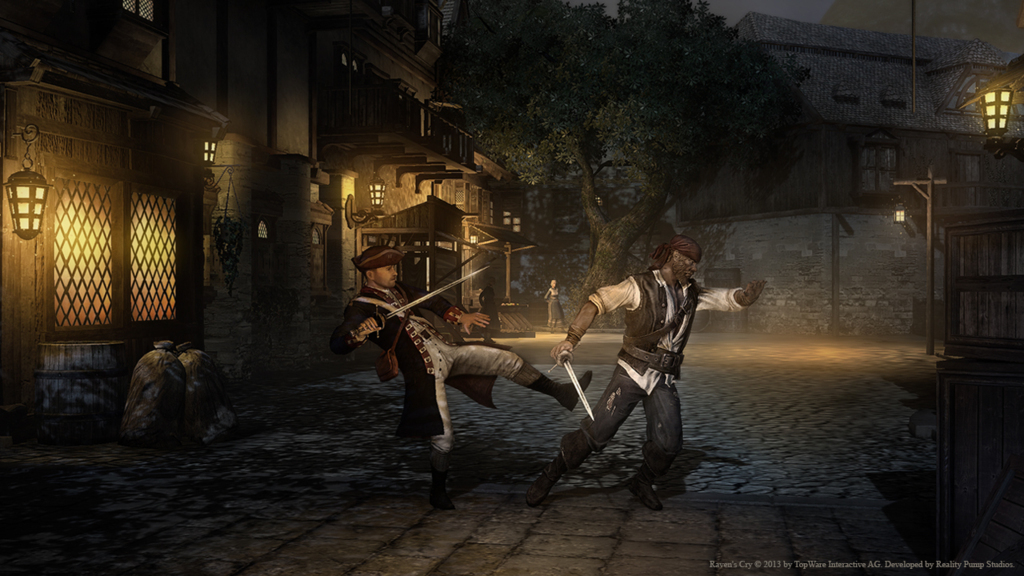 Being a pirate themed game, there’s no doubt the game is set to draw many comparisons to Assassin’s Creed IV, and there are certainly similarities between the two. Like ACIV, Raven’s Cry features both naval and on-foot gameplay, both games take place around the same time in the Caribbean, and both put the player in control of a pirate with the appropriate arsenal of weapons. Where Raven’s Cry differs is in the tone of the story and its use of RPG elements such as decision making, and the more deliberate and realistic design of the gameplay.

The aim of the developers is to deliver a truly authentic pirate game, not just in the portrayal of pirates in the story, but also in the way the game plays. Naval combat in Raven’s Cry, unlike Assassin’s Creed IV, is meant to be much slower and more tactical. Players must weigh every decision they make in battle and think carefully before engaging more difficult ships. On-foot combat will also be a much more tactical experience than a typical action game. The weapons are designed with historical accuracy in mind, and players can make use of a variety of different abilities. 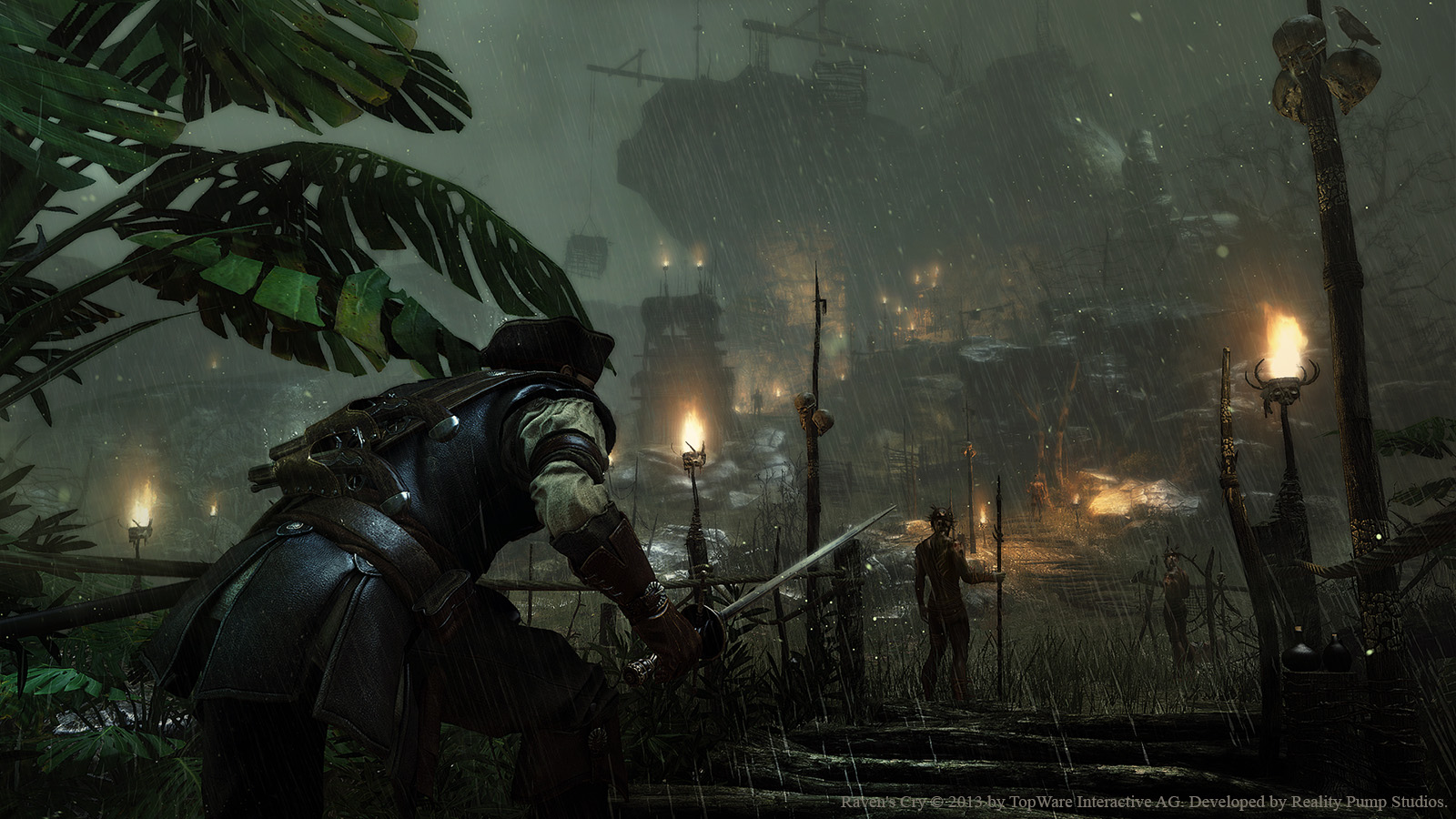 Pirates have always been ripe for video game adaptations, but we really haven’t had the definitive pirate themed action adventure game just yet. Assassin’s Creed IV certainly came close, though many of the core elements of the series got in the way of that game’s more pirate oriented aspects. If you’re looking for a more hardcore take on both pirate fiction and pirate themed gameplay, Raven’s Cry may be a good alternative to Assassin’s Creed IV, and could really benefit from being a pirate game without the baggage of being the sixth entry in a long running series. Raven’s Cry is currently set for a May 7th release date on Xbox 360, Playstation 3, and PC.