The Eden Tower is one of the standout pieces of the city’s skyline. Tall, proud and distinct, it stands in stark contrast to the edifices that surround it, like so many reaching arms reaching up, pleading to a disaffected lord. The grandeur of this building reflects the success of the business housed within, robotics. As it is, the company is one of the most successful on the planet, to the joy of its shareholders. Something more…sinister seems to be occurring here, though. Something that has been successfully swept under the rug. That is where the player comes in. Posing as an interested investor, the player is attempting to take a tour of the building, with the help of an AI possessing a humor as dry as a sandblasted desert, and an offsite guide. It is up to the player to visit various areas and capture petabytes of information to incriminate the company, all in the hopes of saving humankind.

This is the basic plot of Survios’ Raw Data, quite possibly one of the most exciting experiences to be had in VR. Selecting from one of three classes, the player is shuttled via a central elevator to distinct arenas where a large drive is plugged in and must be protected from an overwhelming mechanical security response. 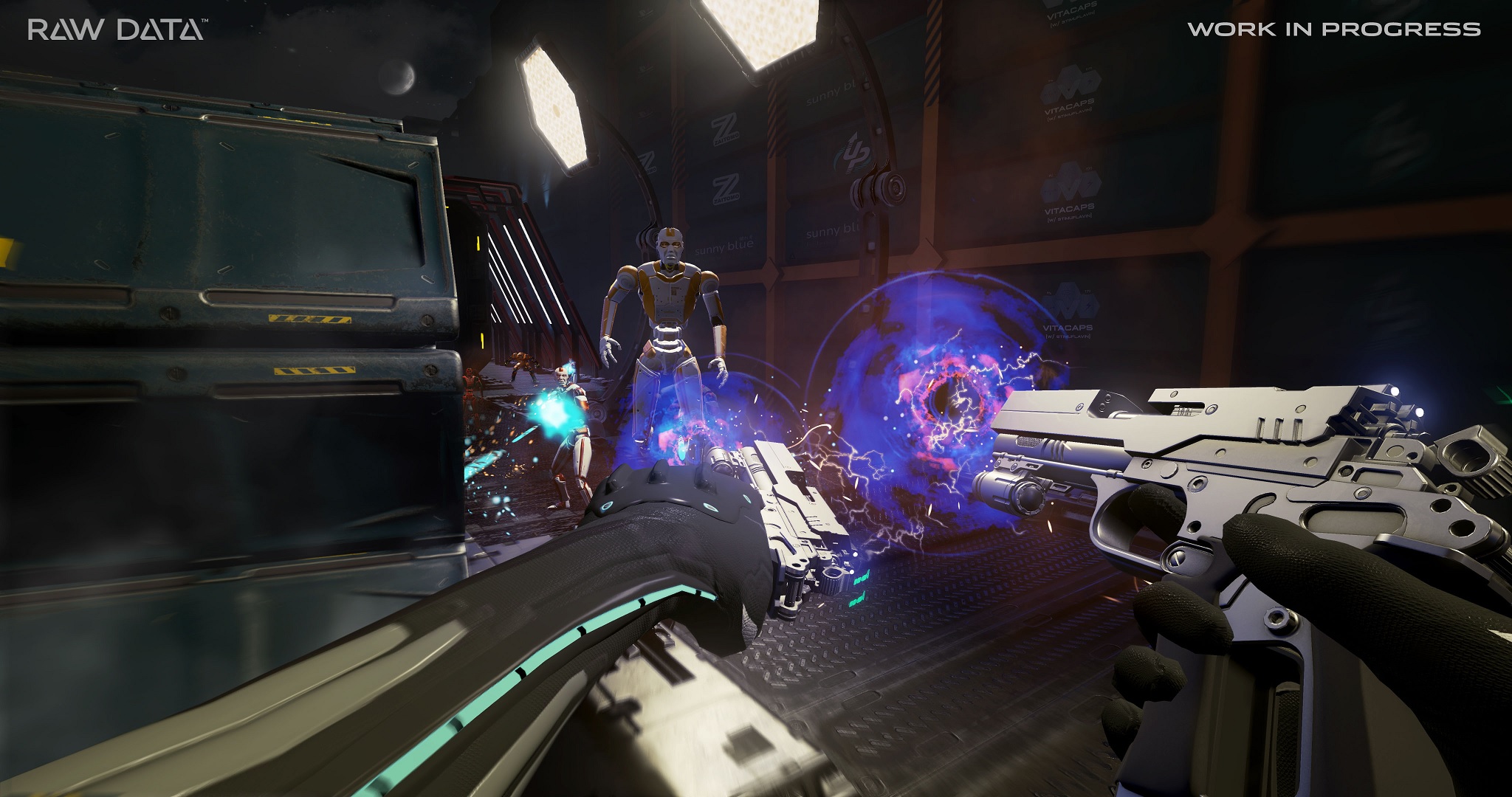 To get one thing out of the way right up front, it should be noted that the initial experience was not optimal. This is, obviously, still a game in progress. When first downloading the game a couple of weeks ago, the game was unbelievably crashy. Turn too fast is a crash to desktop. Reloading a pistol with a slightly strange hand movement resulted in a grey screen in the Vive headset. Sometimes, standing in the elevator, waiting for the level to load caused the game to break down crying. Fortunately, this was resolved with a patch that downloaded automatically a few days after acquiring playable code. All of these issues evaporated after that. The only issue then is once I found myself embedded in the floor post level, unable to get my post match stats. This isn’t mentioned as a slight to the game (see the aforementioned statement that it’s a work in progress), this is brought up so that anyone who has already purchased the Early Access version might be informed that things are better. Oh, and if anyone is having issues with their weapons not firing, make sure that the controller firmware is up to date on the desktop after launching Steam VR. (The hardware’s poor documentation forced me to find out how to check by trolling message boards. It’s actually easy and I’m embarrassed that I didn’t figure it out on my own.)

People who are early adopters of hardware playing an Early Access title are more than likely amply aware of things like this. The plus side is that they also get to experience one of the most intense shooters ever created for a digital medium. 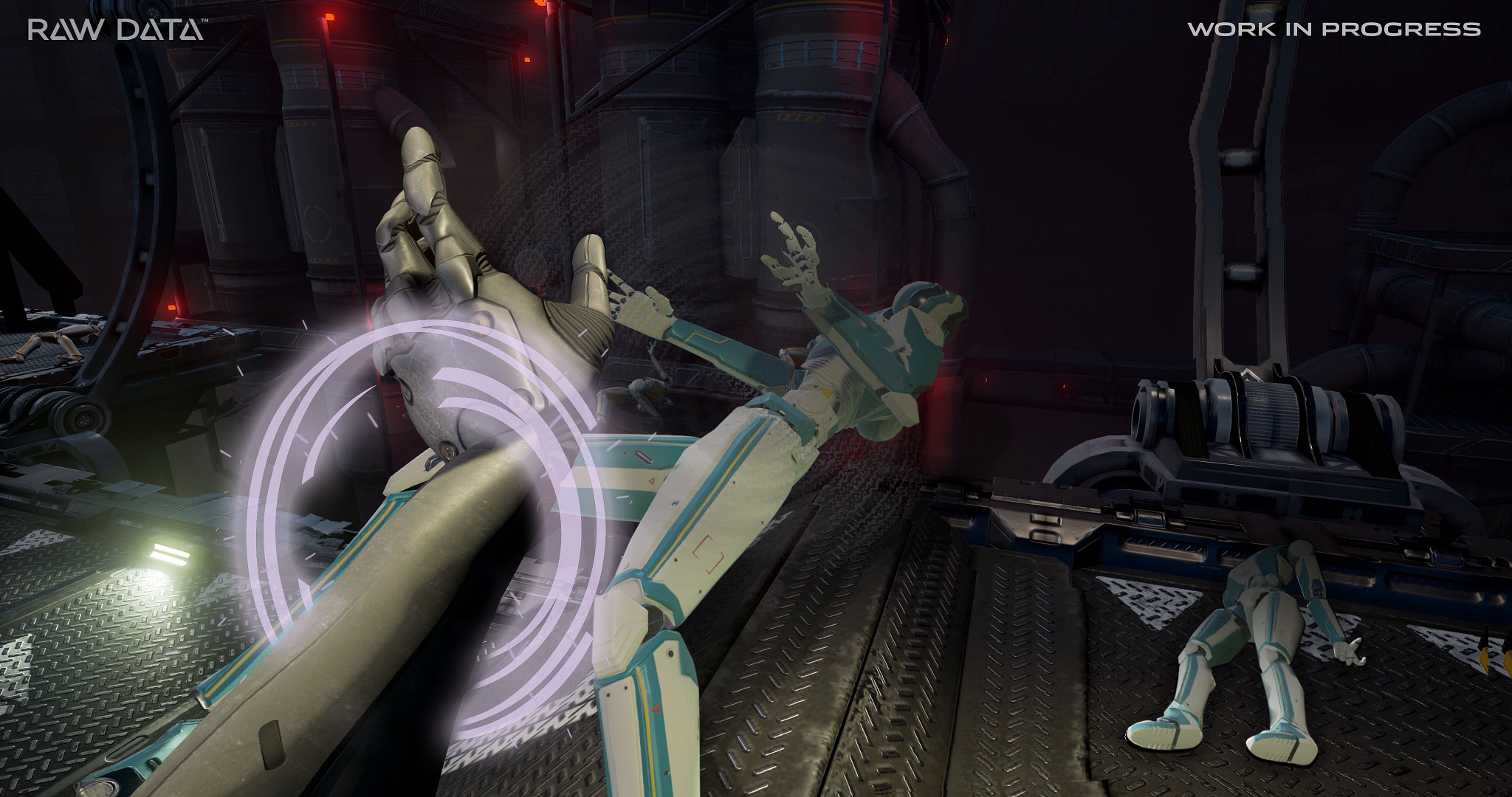 On an initial glance, this has the appearance of a wave based shooter, complete with the “blink” styled travel that is the current anti-motion sickness solution. This game also shows why this doesn’t have to be a bad thing. As players go from arena to arena, they will find themselves protecting a certain point from discrete waves of enemies. However, the implementation is wholly visceral. Being forced from point to point blinking around, forced to physically drop into cover, peeking around to take shots managing reloads to keep outgoing ordinance ready whenever possible surmounts the current hindrances that VR technology is trying to overcome. Moments when a bot gets too close, winding up for a punch, only for the player to knock it off balance with a tasty dollop of pistol whip followed it a shell to what passes for its head demonstrates why the fledgling technology is heralded as the future even with the unsolved pitfalls looming on its horizon.

For the price right now, Raw Data is surprisingly replayable in its current state. I have logged tons of time into the title, flinging this sloshy bag of suet that I call a body around the room, dodging lasers, and shooting down drones and a variety of bot types. It is only when writing this that I have come to realize that I haven’t even touched the sword wielding Saija nor the shotgun toting Boss in favor of the practitioner of “Gun Fu,” Bishop. Unlocking and upgrading his abilities has been an incredible amount of fun, and I keep wanting to go back to older levels to top my old score. I will try the other characters, though. 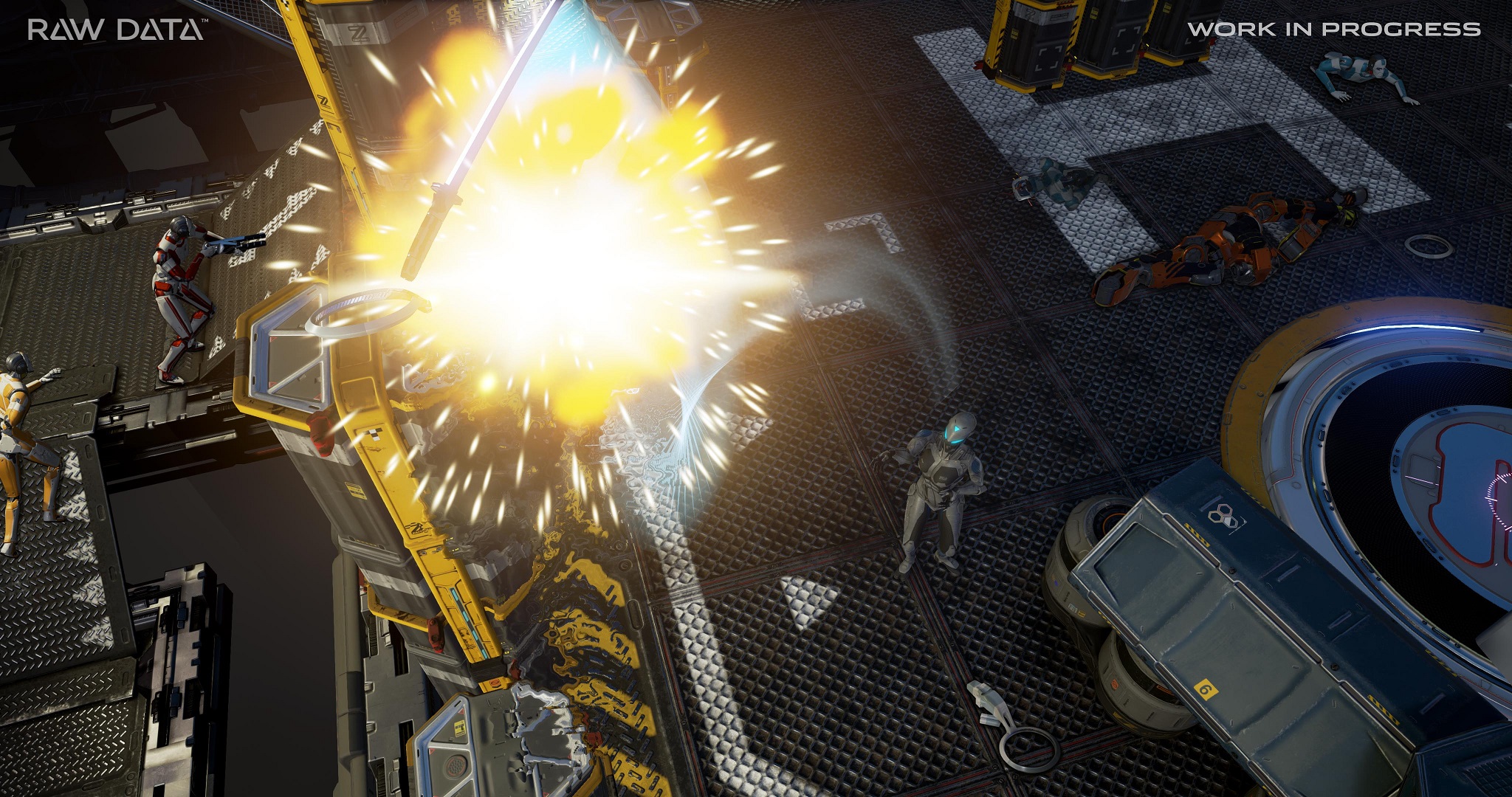 It should go without saying that Raw Data is a must buy title for anyone with a Vive. It serves as a proper antidote for the underwhelming (current) pack-in game, Zombie Survival Training. Engendering a need for physicality and packing in more action and adrenaline than any other game that has seen the light of day, this is the title to pull out when showing off VR to other gamers.