Nobody ever talks about the downside of bullet hell, which isn’t so much the insta-death as it is the sheer waste of all those projectiles.  Patterns of firepower fan out across the screen and while some of it occasionally gets converted into points or pickups and the stray bullet might even hit the player ship, most just wander off screen never to be seen again and serving no use other than to be part of a pretty pattern.  Those bullets could be put to much better use, so Deflector lets you bounce them back right where they came from.

Deflector is a semi-roguelike action kinda-shooter, which admitted isn’t a particularly helpful genre description.  The player is some kind of gladiator-type specimen fighting through an experiment, armed with a short-range boomerang and reflective shield.  The boomerang packs a good punch but it doesn’t fly far, while reflected bullets zip straight towards the direction you’re aiming until they’re off screen.  Reflected bullets don’t do as much damage individually as the boomerang, but when the patterns get thick you can easily throw back five or more with a single deflection, more than making up the difference in power.  Additionally, the boomerang can be reflected on its return, and it flies out farther when bounced.  The specimen doesn’t have much in the way of defense aside from a decently-sized pool of health, but the ever-useful dash is great for getting out of the way while also providing a moment of invulnerability. 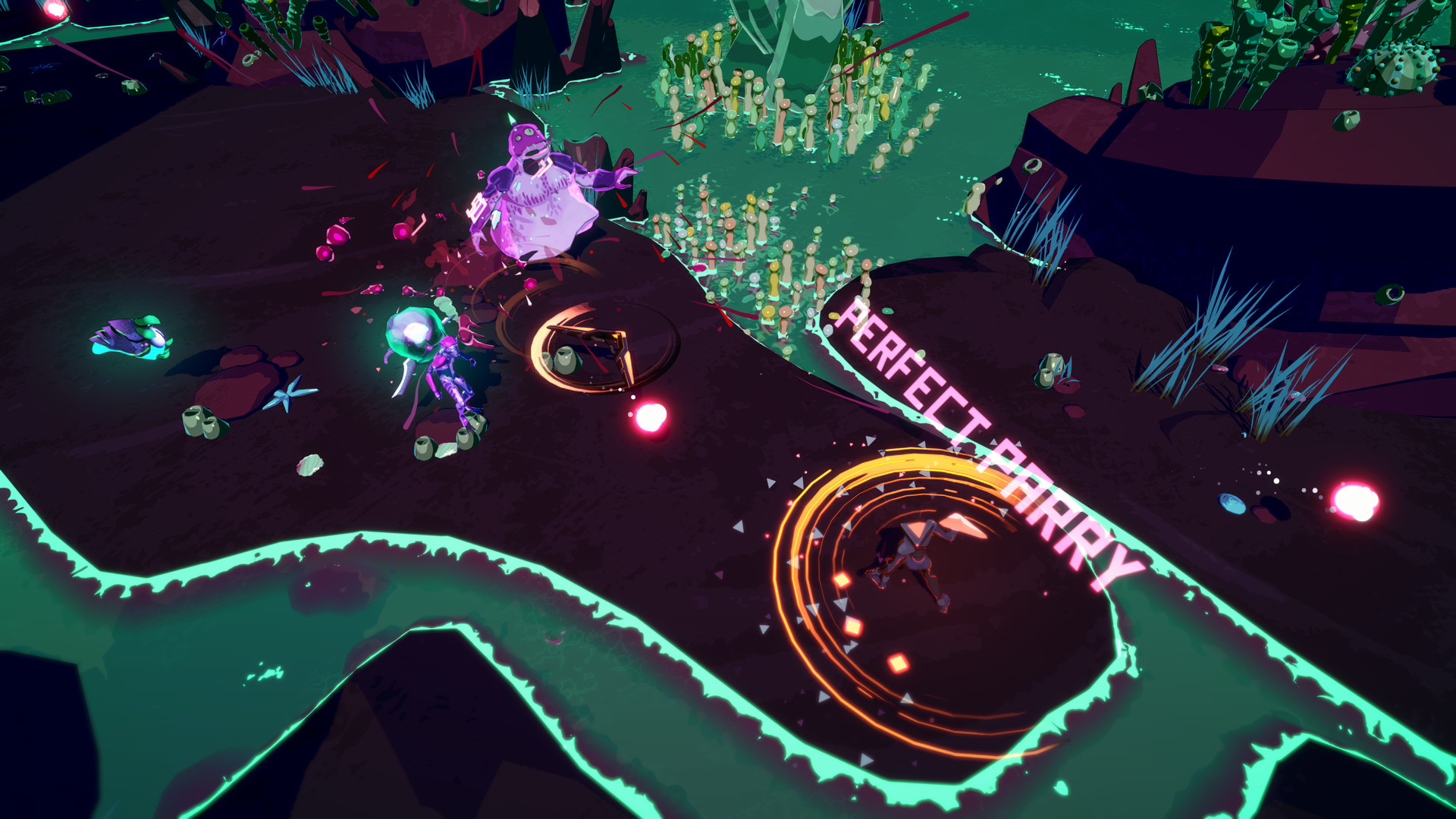 Each environment in the experiment is a series of linked arenas viewed from the map, branching off so you’ve usually got a choice to make for the next fight.  Each arena comes with a reward for survival, whether that be a quick shot of health, cells to spend at the infrequent shops, DNA for purchasing permanent upgrades once the current run is over, and mutators that add new skills to the specimen.  Mutators come in three types influencing attack, deflect and support, and once chosen they need to be assigned on a grid to take effect.  The grid also has bonus mutations on it that you can build towards, so there’s a strategy in designing the toughest fighter around.

While the generic mutators give a slight increase to direct attack, reflected bullets and base health, it’s the specialized ones that let you create a truly deadly build.  Enemies that explode when killed or a laser that targets the nearest enemy when you dash are the easier ones to figure out, but there are some nicely-complicated ones too.  For example, one mutator creates a circle in a random spot on the screen every time you reflect something, whether that be an enemy bullet or the boomerang, and if you stand in that circle and reflect again a set of four spinning blades shoot out.  It takes some work to get used to the more in-depth mutators but when used properly they can create major changes in how you’d approach the next fight. 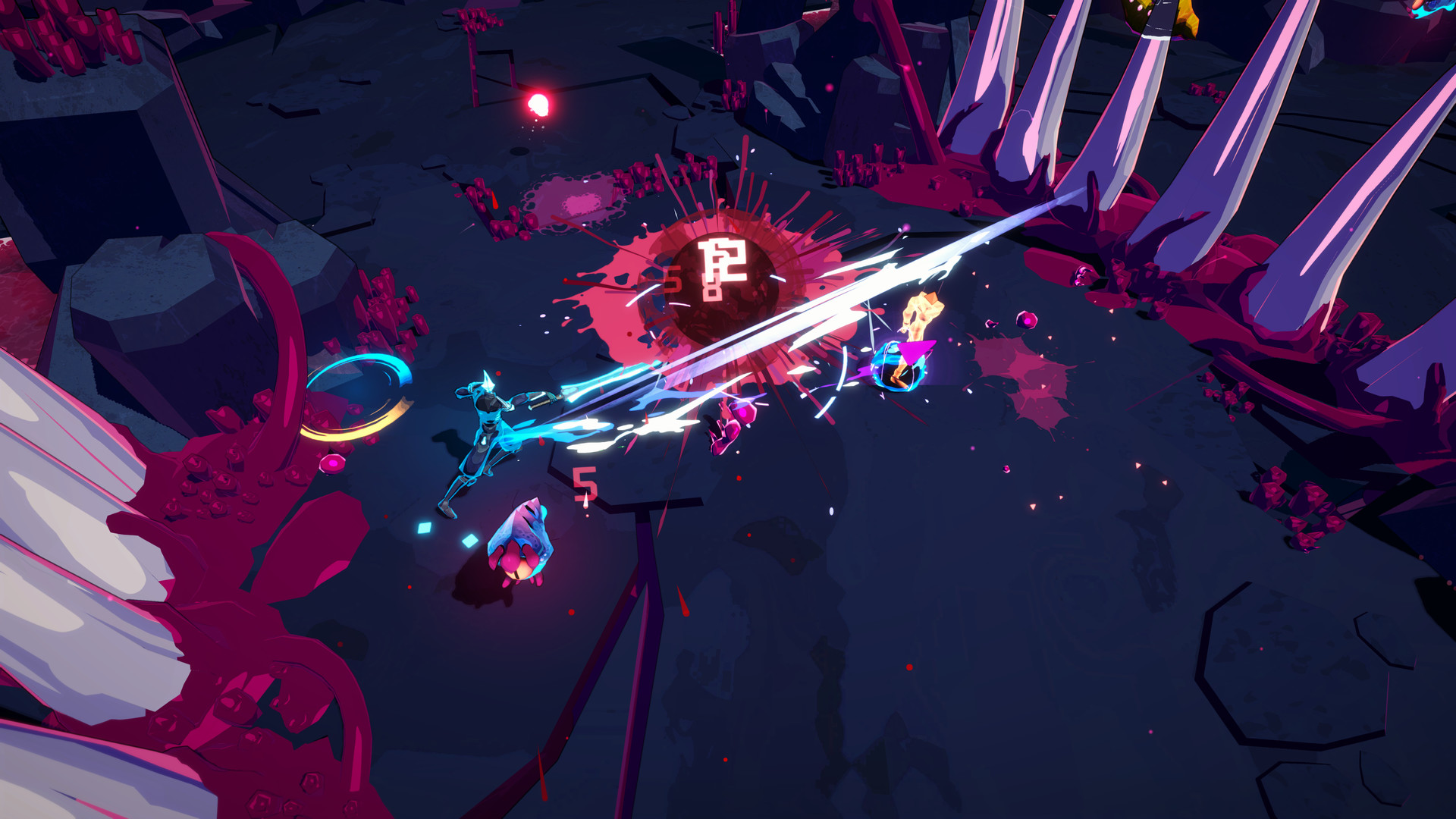 It will also take practice to see some of the environments beyond the first one.  The Living Entrails area is the starting zone and you’ll need to get good enough to reach the boss fight with enough health to survive, not to mention fight it a couple of times to get a sense of its patterns.  Once past, though, two new biomes open up with different hazards and enemies within, and you can choose which of the three to fight through.  Not only that but new events are added to the map, special challenges such as dodge a pattern of bullets, survive waves of enemies, get way too far into the level to drop off a fragile egg that will break if you take too much damage, etc.  Hopefully there are good rewards for this, but surviving one event opens up another and it takes a bit to get to the end of the side-quest.  Deflector in its current state is a game meant to be played for the long haul, with its major rewards like new characters doled out slowly.

While Deflector has released in Early Access it still feels well polished and filled with content, even if the bulk of that content requires climbing up a steep skill-wall.  Once you’re used to the controls the specimen can clear most arenas without taking a hit, especially if it’s found a good set of upgrades along the way.  There’s a learning curve to using the deflector shield, especially if you’ve gotten used to the last-possible-second of Dark Souls for parrying, but once you’ve got its range of deflection you can set up boomerang and deflected-bullet combos that tear down even the tougher enemies in a few seconds.  Each new arena is a fast-paced confrontation against a mix of enemies that’s more than capable of stopping the specimen in its tracks, but speed, power, weird abilities and sending waves of bullets back where they came from should be enough to survive to see what Deflector‘s next arena has in store.