Released last year by Devolver Digital and developers Nerial, Reigns became a surprise hit on mobile devices, thanks to its use mixture of gameplay that blended the addictive swiping of Tinder with a choose-your-adventure narrative that allowed you to run your own kingdom. And looking back at how that previous description sounds, it seems like there was no way the game should have worked as well as it did, but it ended up bring quite the addictive piece of work indeed. So rather unsurprisingly, its sequel time, and now here’s Reigns: Her Majesty to follow things up. And it may be easy to dismiss something like this as the first game with just a mere gender swap, but even with just one minor decision, Nerial have found a way to keep things fresh.

In terms of setup, things are rather similar to the first game. You play as the new heir to the throne of a kingdom that you have to keep prosperous as long as possible, up until your death. At that point, you learn that a mysterious curse has been placed upon the monarchy, causing you to live out the life of the next queen regnant, and the next one, and the next one. The more you play, the more you can unlock various cards to be added to the deck that you swipe with, thus increasing the number of tales to craft. If anything, it seems like Her Majesty focuses even more on the lore and how deep it goes this time, if the interactions with mysterious forces suggest anything, and it does indeed make for a more compelling game. 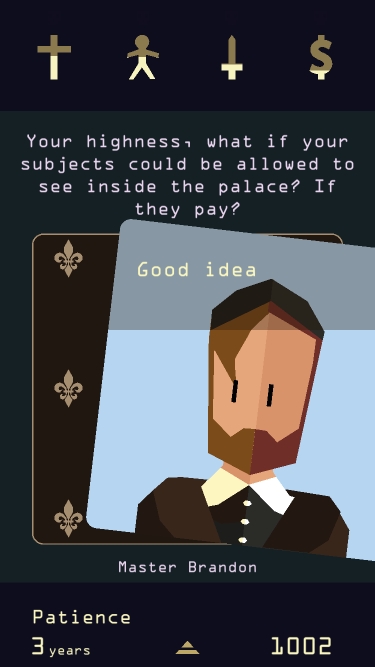 In terms of management, things are still mostly unchanged. You have to manage the city’s finances and the well-being and happiness of the citizens, church, and military, with each choice you make affecting them in one way or another. Cause any of the meters to drop to zero, and it results in a horrific death. But max one out too much, and the same can happen as well, so the trick is in trying to provide a perfect balance. The new cards this time around prevent some good dilemmas, especially involving the likes of whether or not to dabble in the dark arts at times, so the challenge level still remains at the perfect amount.

So what exactly does Her Majesty bring to the table that’s new? It may sound odd, but the revolutionary bit may come in just one simple word: Items. Depending on your choices, you can gather various special items along the way, which can greatly affect just how your queen’s journey is going. Whenever the new triangular symbol at the bottom of the screen is flashing, that indicates a moment where you can use an item that can hopefully be your ace in the hole, potentially even saving you from death. Sadly, that did not happen in my case, as the people delivering me the bad news concerning my fate just kept complaining about me throwing random items at them. Well, it was worth a shot.

Reigns: Her Majesty may not seem like it’s going to end up being the most revolutionary sequel it can be, but even with one new gameplay element and a few touch-ups in areas such as character designs (I kept assuming the game was set in a French Revolution-esque era this time around, which feels appropriate, though nothing was confirmed), it looks like the act of ruling over a kingdom through swiping will end up being quite captivating again. And we’ll see if it is indeed easy to get sucked in when the game comes out for mobile devices and PC this Fall.