Jurassic World is setting all kinds of records at the box office this summer, successfully rekindling the general public’s interest in dinosaurs. It was only inevitable that the games industry will want a piece of the action. In comes Ark: Survival Evolved, a survival game that blends sci-fi elements with dinosaurs. I recently got to go hands on with the latest version of the game, and though it still has a way to go, Ark contains plenty of potential.

It’s hard to comment on the way the game plays, as I was given a hybrid version of the gameplay. Essentially I was playing the PC version of the game on Xbox One. The menus and interface were clumsy and difficult to use with a controller, but the developers assured me they’re still working on the control schemes for PS4 and Xbox One. 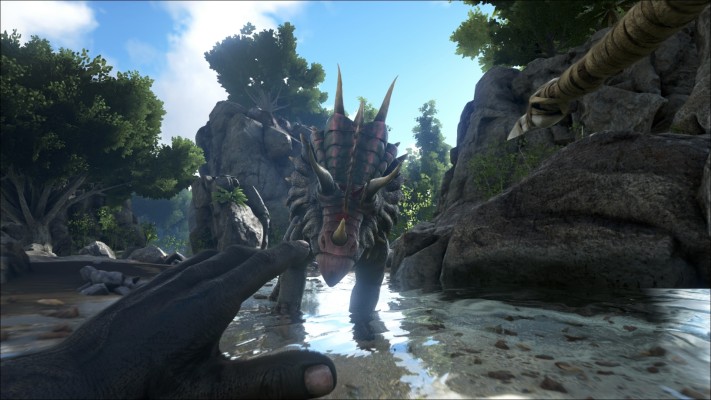 The developers had a clear goal in mind when designing Ark; create a cool survival game with dinosaurs in it. They didn’t think there were any good dinosaur shooting games, and so set off to create one. So far, the developers are living up to their promise. Since launching on Steam Early Access, a total of thirty-five dinosaurs have been added. The most recent update included the spinosaurus, which is powerful both on land and in the water. By the time the game launches, there will be over seventy creatures in the game. Aside from dinosaurs, players will encounter insects, fish, and mammals throughout the island. There’s even the recently discovered Titanoboa, a large snake that is sure to give gamers nightmares.

This isn’t a small world by any means. The current map sits at 49 square kilometers, and that doesn’t take into account the underground cave network, nor the caves under the ocean. Ark’s world is highly dynamic with a high level of destruction, and its own weather system. During the demo the weather went from sunny to raining and from morning to evening. Developer Studio Wildcard confirmed that snow will be added in a future update. 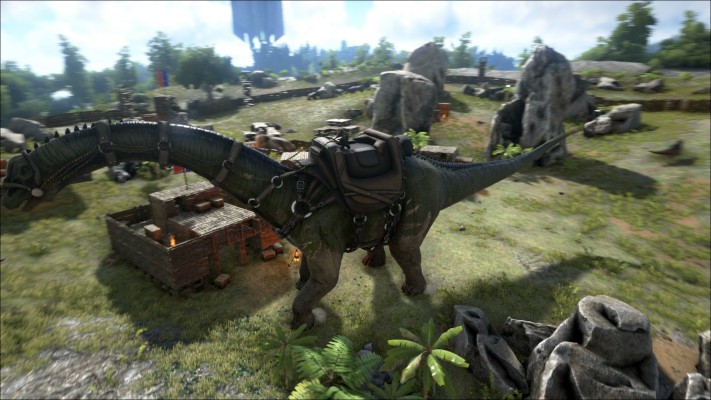 Studio Wildcard is also giving players different ways to play Ark. There is the standard PvP where players not only have to survive the environment, but also other players. Then there’s the solo mode where players can enjoy more of a PvE experience. There is a story in Ark that can only be found via intense exploration.

Ark: Survival Evolved is the first game in years to truly use dinosaurs. There’s a great idea behind this game, and it looks visually strong at this point in its development. I am a little concerned that the studio was showing the game running on Xbox One without having a proper control scheme in place for consoles, but there’s potential here nonetheless. Ark: Survival Evolved is available now on Steam Access with an Xbox Game Preview release possible in the near future. The game will fully launch on PS4, Xbox One and PC sometime in 2016.