A few years ago, you probably wouldn’t have thought much of publishers Rogue Games. They were publishing decent-looking stuff, but nothing that seemed to be lighting the gaming world on fire. And then in 2020, one Reggie Fils-Amié, legendary former Nintendo of America President, announced they’d be joining Rogue as a strategic advisor. And it looks like this is the year that whatever strategy Reggie may have suggested pays off, as over the course of this past summer, they had announced a whole batch of impressive-looking games that they’ll be publishing, suddenly turning way more heads than expected. Now having gotten a chance to check out five of those games, I can indeed say that there it looks like Rouge will be publishing a ton of stuff to put on your radar. 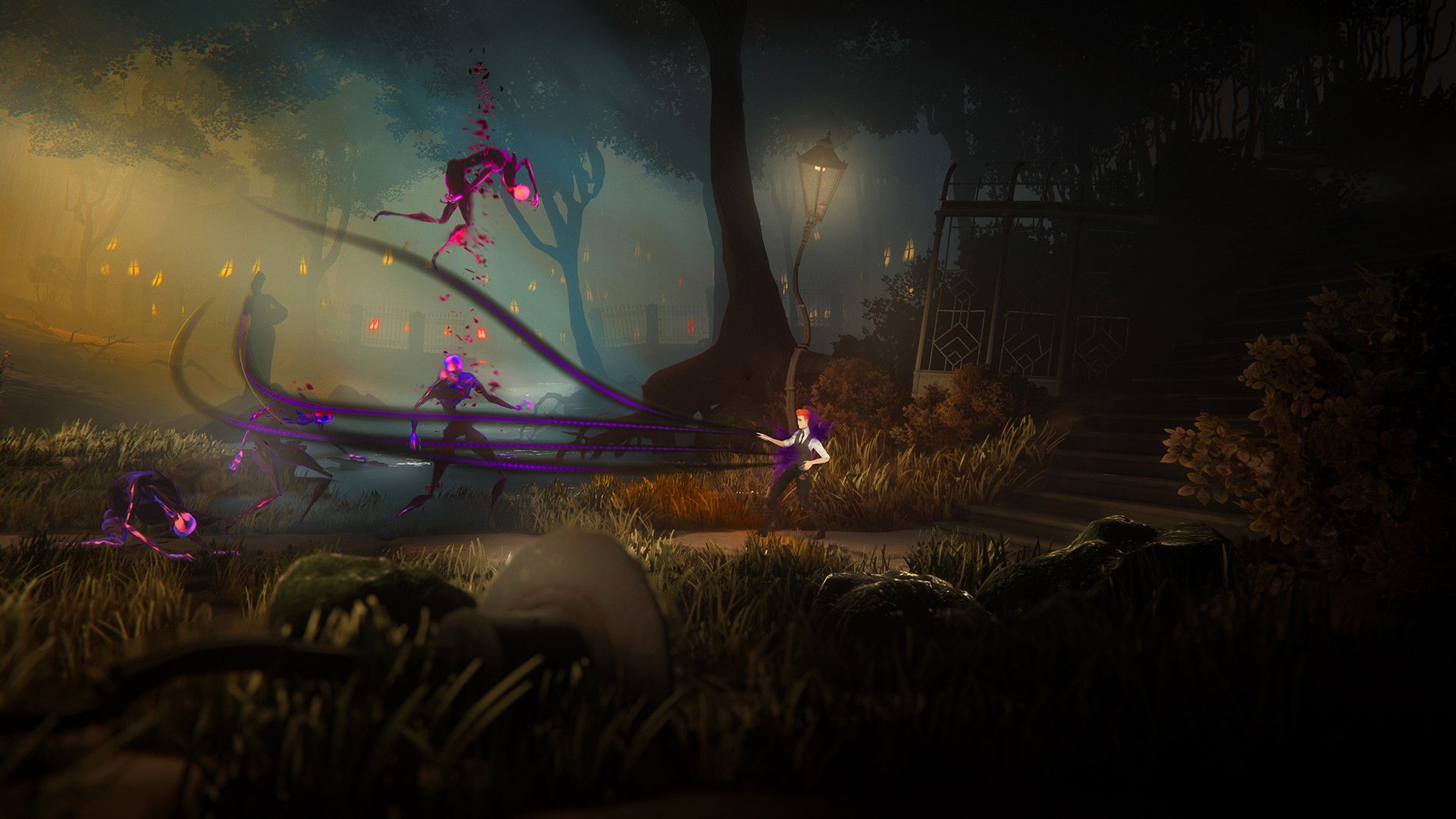 Coming off of a Gamescom award win, the first game that was shown off was The Last Case of Benedict Fox, a Lovecraftian metroidvania game from developers Plot Twist. Playing as the titular character, a detective bound to a demon who can leap into the memories of the deceased, the game has Fox swapping between exploring a giant mansion and exploring a nightmarish limbo. Both areas were stunning to look at, though it goes without saying the the more demonic words was the bigger visual treat, all twisted with a massive amount of insane details to check out. In either case, both worlds had various clues to hunt for, some of which appeared to tie into puzzle solutions while others added more to the world’s lore. Already, I could tell that there was going to be a lot to hunt for, which should make for a nice and meaty game.

The controls were also smooth, which came in handy when having to navigate some of the platforming challenges in the more twisty limbo world. The combat was a little trickier, but still fun, though an earlier demo meant there sadly wasn’t any room to explore some of the upgrades that you can learn later, some of the more insane attacks some of the various items in the shops. What was on display was a mere taste of The Last Case of Benedict Fox, but a lot of what was there still hinted at the game’s greater mystery, showing glimpses at an impressive story told with a rather attractive Burton-esque style. Overall, it appears to be shaping up to be a case that’s worth investigating all the way through. 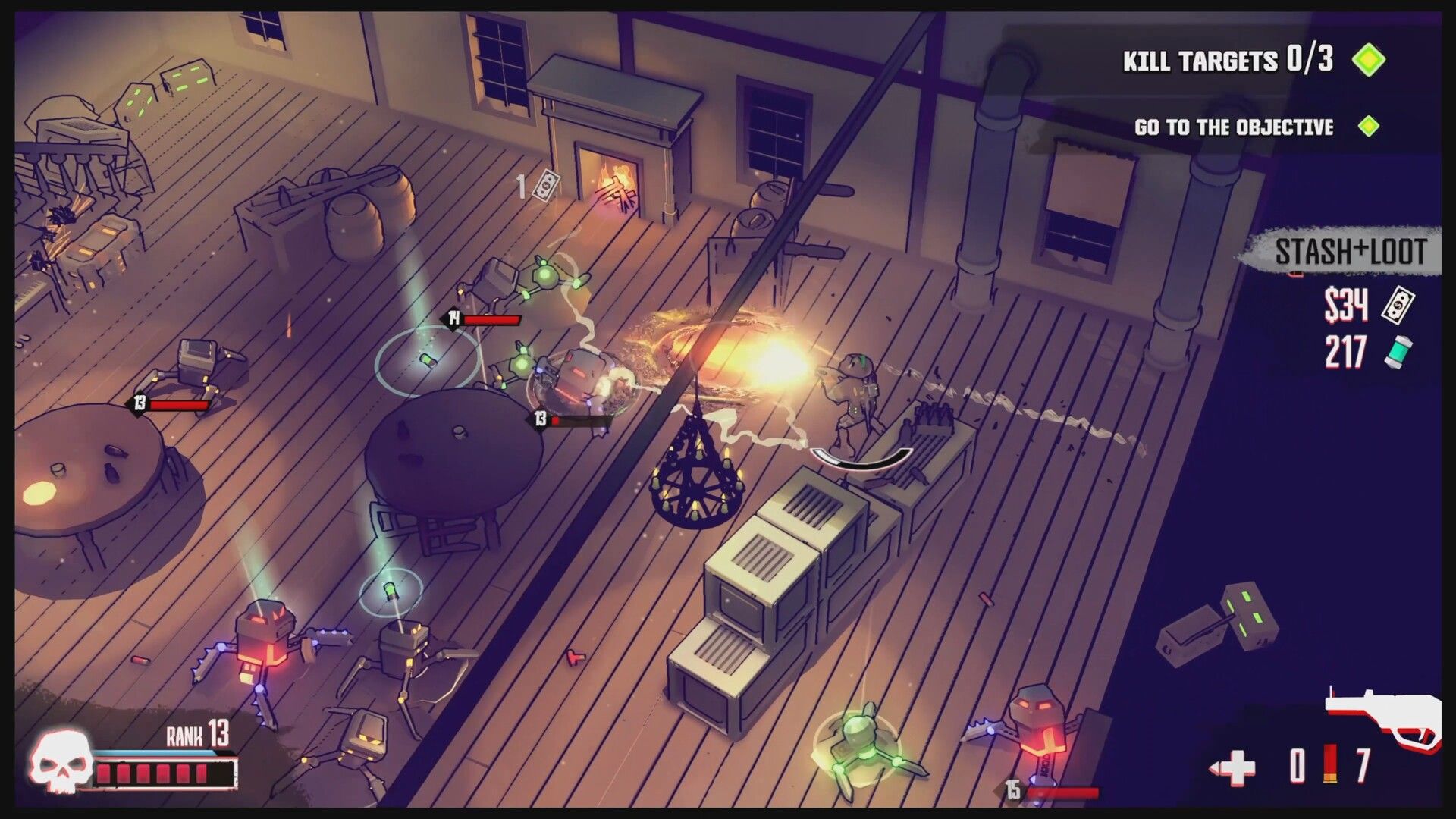 Up next was the latest game to be announced by the publisher, Dust & Neon. A twin-stick roguelike looter shooter from David Marquardt Games set in a futuristic version of the Wild West, the game sees you playing as a famous gunslinger that’s been reanimated and placed in a metal body in order to stop a robot apocalypse, with our main character being the creation of a mad scientist who created a new clone after every death. Now, on the surface, even with its sci-fi Western hook, some may dismiss the core gameplay as being unoriginal. But originality can be secondary to pure fun, which is where Dust & Neon excels. Plus, the game has one notable ace up its sleeve: it has what may be the best reloading action in any game ever.

Yes, praising the reloading in this game — or any game — may seems like one of the most ridiculous compliments can give. But I can’t help it, the reloading in Dust & Neon is just the sweetest possible cherry on top of things that wasn’t expected. It sounds odd when written out, but you really have to experience it in action. Every time you reload, you see the full weapon appear on screen, with the ammo chamber open. Then you press a button as you watch every bullet get added, one by one, tapping as quickly as possible in order to get all your bullets in ASAP. And you can even stop in the middle of reloading if possible and just use whatever bullets you were able to load.

What the heck does all of this actually contribute to? Well, odd as it sounds, the emphasis on reloading like this increases the tension during combat, making every battle truly feel like a classic Wild West shootout as you frantically try to add as many individual bullets as possible while taking cover before the enemies advance upon you. It’s a perfect example of how even the little touches in a game can help make it a potential classic. Though it helps that the rest of the action perfectly nails the feeling of classic firefights as well, allowing for some amazing action that in turns easily appears to make for a ton of addictive gameplay loops as you shoot your way through different objectives in each run. It’s a just a terrific roguelike overall and we can’t wait to see more of it. 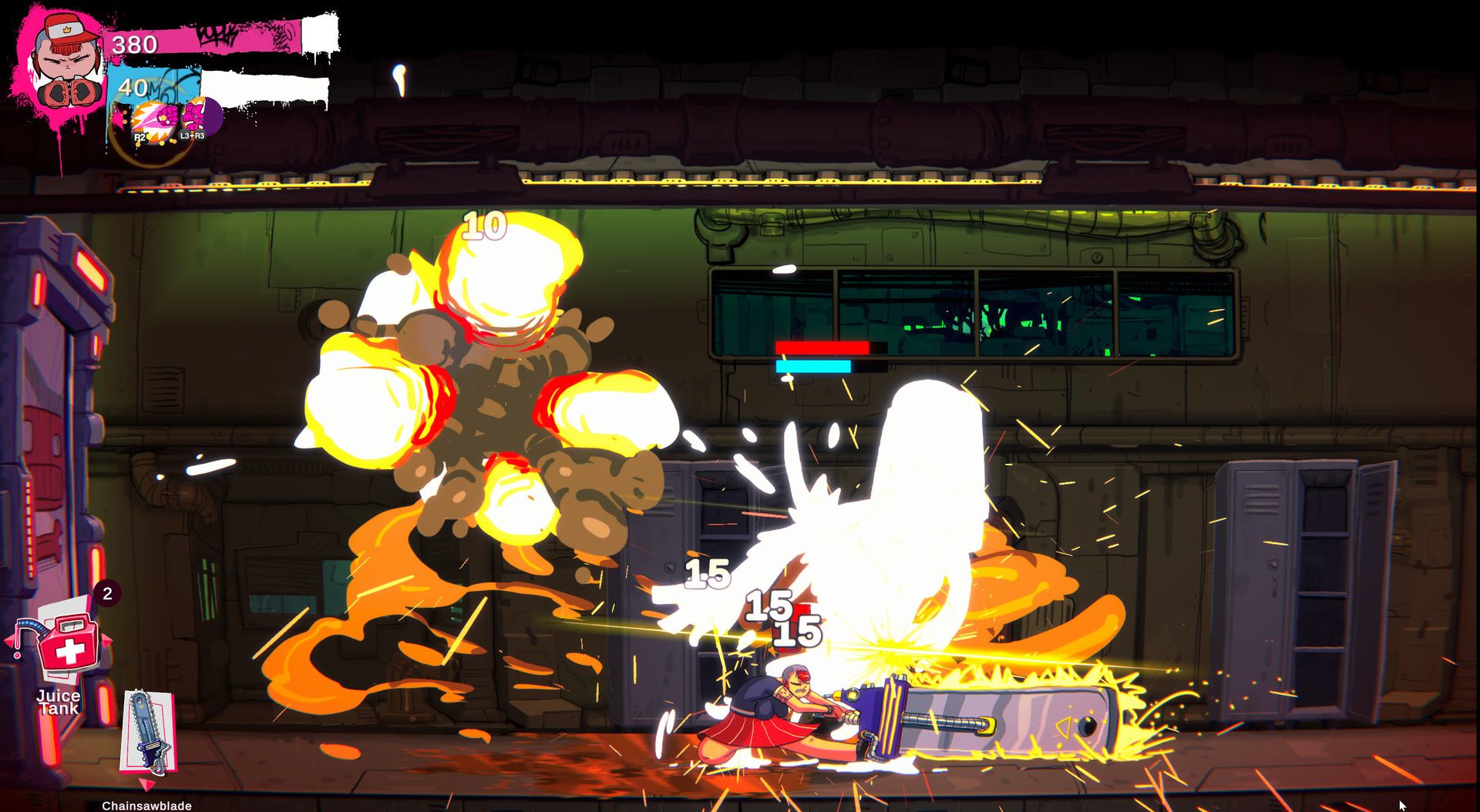 Next up, because you can never have enough metroidvania games, Rogue also showcased Subcult Joint’s upcoming game Cookie Cutter. Notably, though, it was a different beast compared to Benedict Fox. Instead of an atmospheric game focused on the supernatural with a larger emphasis on exploration, Cookie Cutter is a heavily stylized and cartoonish sci-fi title with a major emphasis on action where you play as an android named Cherry out for revenge. The immediate thing that pops out is the art style and animation, with its world being described as “techno-pop-punk.” It looks gorgeous, with the colorful graphics, nifty character designs and wild attacks adding a lot of personality.

Speaking of the combat, the melee-based attacks were nice and wild, with a lot of fast-paced combos that were fun to pull off. The level design was also nice, with a lot of different areas to check out in search of upgrades. Granted, this was clearly an earlier part of the game, so the wilder stuff wasn’t being shown, including a lot of the story and dialogue. Still, it put up a nice challenge, even in the beginning, especially when it came to a rather massive and impressive-looking boss at the end, whom I sadly died against quite a few times and couldn’t beat in time. Still, it served as the cherry on top of Cookie Cutter’s insane animated punk world, which had me easily getting addicted to it and kept me addicted to bashing in several groups of rogue robots. 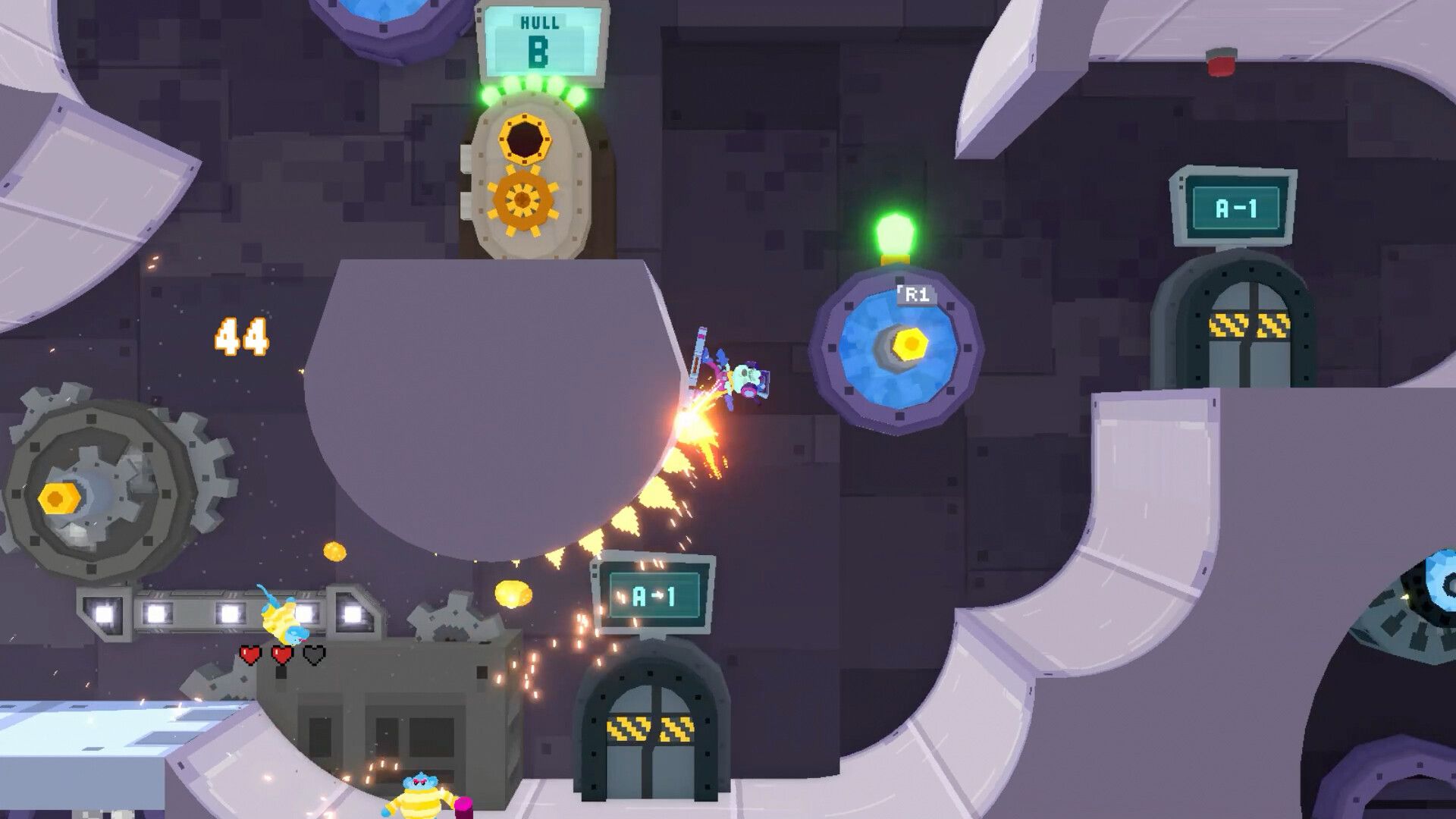 Unfortunately, by this point I had become addicted to the previous three games too much to devote a larger amount of time to the final two games. This saddened me a little when it came to Seafrog from Oh My Me Games, the first ever Rogue Jam winner. the game has you playing as a mechanic trapped in the middle of the ocean with their AI friend, and to escape, they’ll need to go on a series of misadventures in order to fix their ship and find various parts for it. Oh, did I also mention that getting around your ship and others requires traversal via a giant wrench that you use as a skateboard? Because yeah, that actually makes up a the central gameplay, and it’s wild indeed.

Through a series of massive levels, players have to find ways to generate good amount speed, allowing them to glide up ramps, up the walls and onto curved ceilings, grind on various surfaces, and use the wrench to operate various machinery, not to mention using it to stun enemies. It’s unique gameplay that puts emphasis on pulling off insane tricks combos and has good controls, but there were some instances where the game may have been too fast, as there were several instances where it was easy to overshoot a goal or a platform, requiring you to work your way up to them. That could just simply be an aspect of the challenge that requires practice, though, and with its fresh gameplay and colorful low-poly graphics, Seafrog is a rather attractive number, though don’t expect it until 2024. 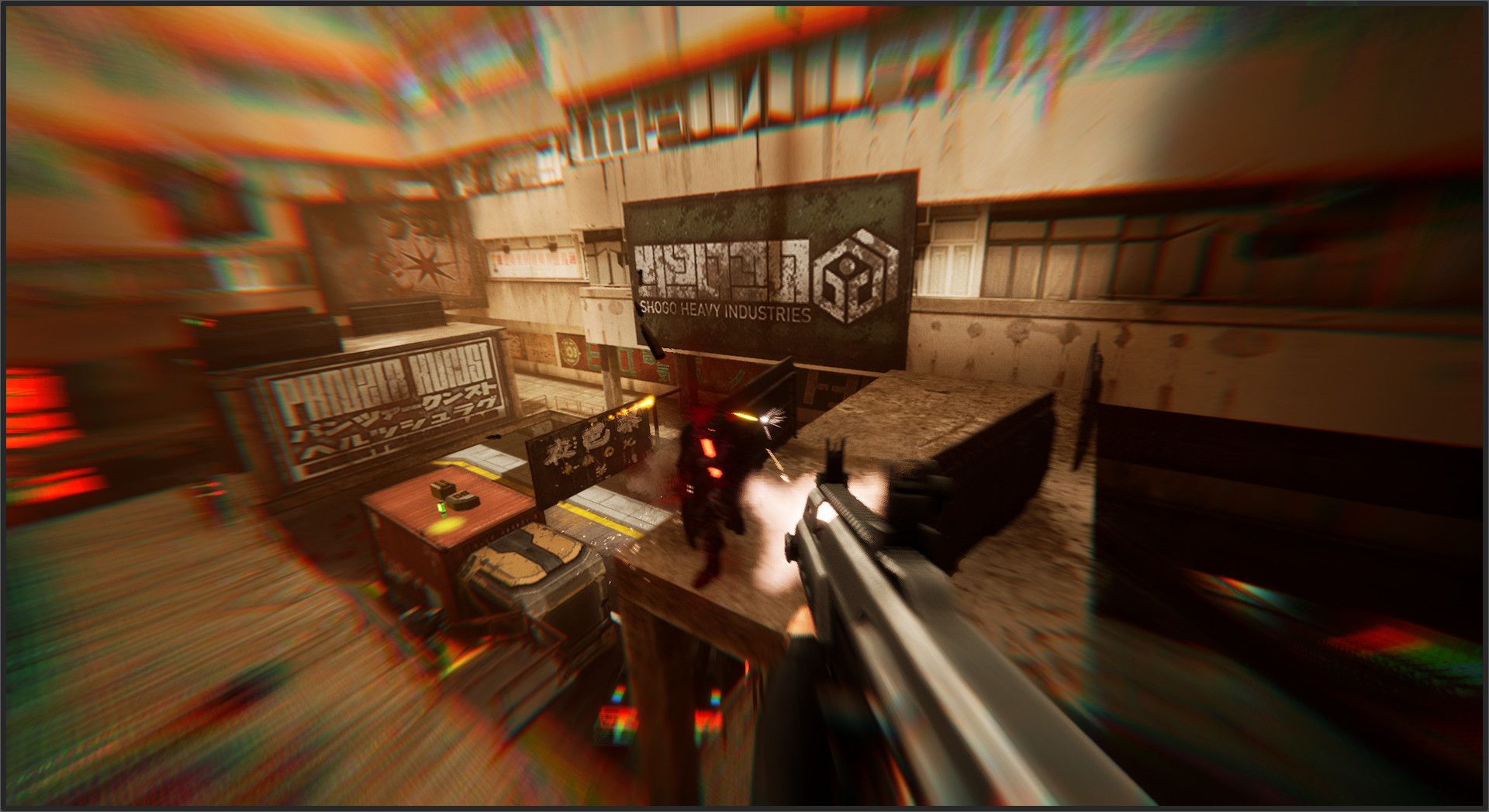 Finally, there was Sprawl, from Hannah Crawford and Carlos Lizarraga. It’s a retro FPS game set in a cyberpunk city with an emphasis on speed and parkour that has bullet time, and yep, it’s another boomer shooter. Okay, again, it’s a fun boomer shooter, and it blends all of its elements together well, it’s just a little hard to judge it at this early state, given that it could find a way to stand out later on. The use of implants to spot parkour areas is a nice touch, and while bullet time isn’t anything new, it’s always welcome. That said, given the emphasis on precision and headshots in these areas, my experience with the demo was hindered by the fact that I had to play with a controller. Hopefully, things will continue to improve, and we’ll eventually have another hit FPS on our hands.

Looking back on it, Rogue Games seems to be in the business of delivering games that are familiar in various ways while still being extremely fun, but still finding ways to deliver effective twists at times, and it’s safe to say that you can’t argue with a strategy like that. The future looks bright for Rogue and we can’t wait to see what else they decide to publish in the future.