The wind is too slow a thing to run like, so don’t do that. Rifter released a demo over the holiday week and getting through it means outpacing most of the natural phenomena speed would normally be compared to. The jagged little ninja only takes a second to get to full speed and once it does it tears across the screen at a rate that shows exactly why the camera is zoomed out so far. Add in the physics from the swinging mechanics plus a bit of practice and you can clear a level in a very small number of seconds.

Or at least the early ones from Rifter‘s sizeable demo. The current version of Rifter is available for free, released over the holiday week at itch.io, and it’s got all the levels from the first planet ready to hone your skills in. The primary ability is a grappling hook that can latch on to hovering points in the sky or the pink sections of the landscape. It automatically retracts at a medium pace if you do nothing, and faster when you push up, and getting to grips with its momentum-enhancing abilities is key to both mobility and shaving hundredths of a second from your best time. The other ability is a slash, which is initially only used to open the level end-point but eventually takes out enemies and zips along waypoints as well. Both abilities have to be aimed, although there’s a generous margin of error on the cursor’s part. It’s worth noting that the game supports both mouse/keyboard and controllers, but I eventually gave up on getting my XBox One and wired 360 gamepads to work. 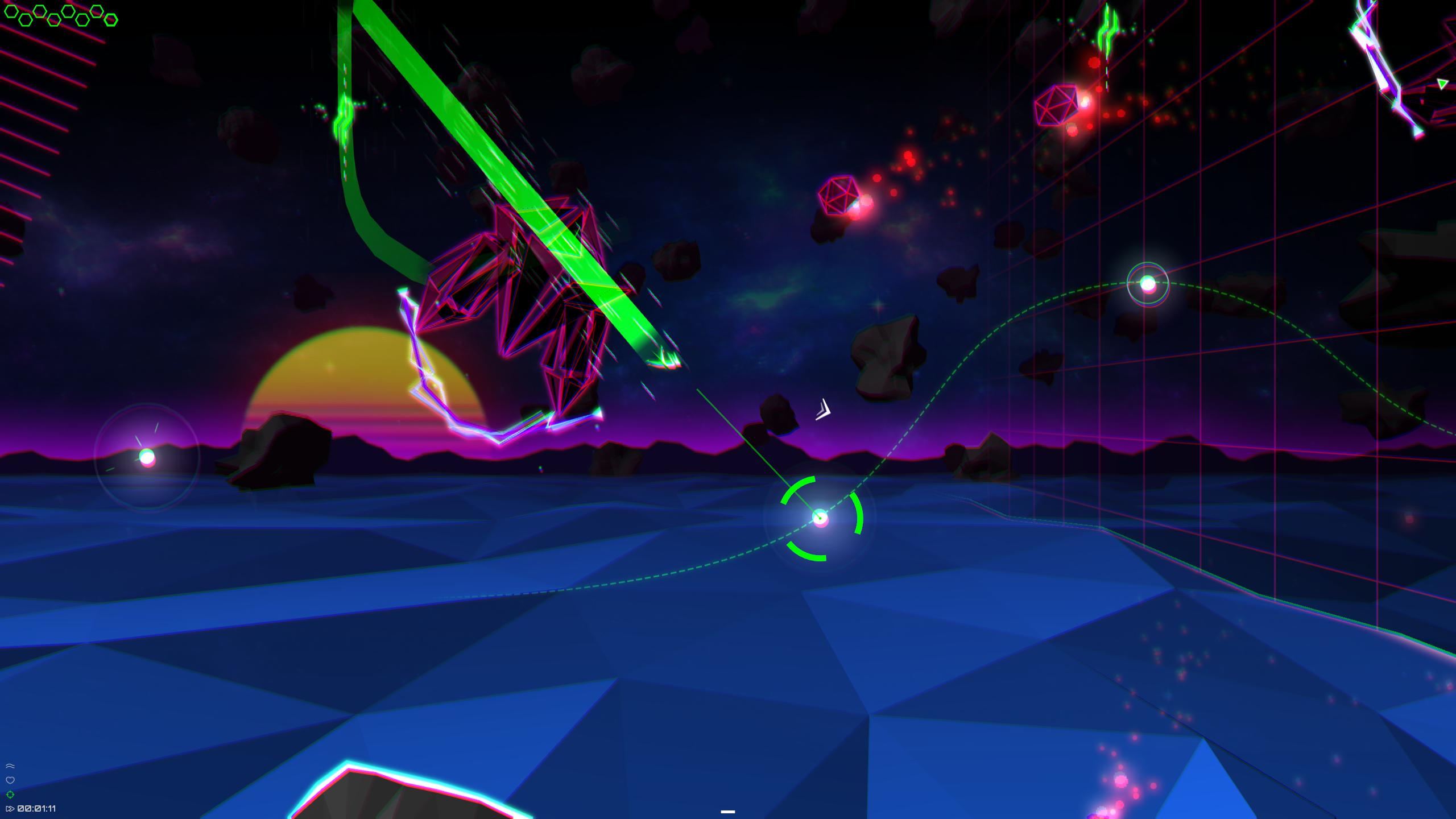 As the levels go by they get more complicated, requiring longer runs and introducing new enemies to slice through. Radiating waves indicate danger zones, either triggering a huge damaging laser or being the scanning zone of missile-firing enemies. The nice thing about that latter problem is it can be eliminated by tracing the zone back to its source and slicing through the problem, but laser areas simply have to be dashed, swung, or plummeted through as quickly as possible. Other features include dash targets, moving swing points that fling you along, “Batch” areas where all enemies need to be defeated to get past, and of course bigger and meaner enemies that take new tactics to defeat.

Rifter has only had the one release so far but it’s an excellent start to a fantastically-styled, incredibly kinetic high-speed platformer. There’s some level tweaking and bug-hunting to sort through (the cursor has a tendency to disappear, making it impossible to target anything) but the whole point of the free period is to get player eyes on it and work out the kinks. It’s technically a prototype release but there’s a nice amount of content available and the level design gives the run/jump/swing/dash mechanics a thorough workout.  Many levels even have secondary objectives, such as a target time or completing without touching the ground or falling into water, plus the occasional secret exit to hunt down.  There’s a good amount of work to do and levels to build to take Rifter past its initial release, but for a free chunk of what’s proving to be a fantastic new speed-run platformer it’s hard to beat.

Also, that bit in most major demos where the game takes you to the boss, which roars mightily before the screen fades to black with a “Coming 20xx” message?  The Rifter demo has no use for cheap marketing tactics and lets you take down the first of its giants.

Rifter is available at itch.io and is well worth a look.