Here we are then; perhaps not the only one, but undoubtedly among a crop of releases over the past few years housing a, shall we say, noteworthy visual style. Even if one were to argue its artistic direction may well be derivative or inspired more so than it is wholly inventive in its own right. Quick you may be to draw on the most easy and obvious of influences and influencers, as you may be in throwing up the first but justifiable question going into Ebb Software’s Scorn: “ok…but what else is there?” And truth be told, that potentially-cynical attitude is warranted in some respects. While you can argue that a game’s mechanics or writing by contrast can carry an otherwise less-accumulated product through to its end, visuals don’t hold the same luxury.

An artistic direction might please or entice early on, but that immediate response isn’t guaranteed to stay come the second, third or even twentieth hour. Hard as it is to say just how lengthy or brief Ebb Software are planning to keep players wrapped up in the unsettling, bio-mechanical surroundings of Scorn, even an aesthetic such as this isn’t unbound by such concerns. At the very least, having played through the opening hour — its prologue segment — my intrigue (let’s stick with that) with both the “what” and “why” of this world’s existence/relevance, still thankfully persists. Even if that is as much down to the lack of explanation off the bat, as it is a feeling that a mysterious unraveling of the truth is apparent. If nothing else, spots of environmental storytelling and finer artistic touches do help to alleviate concerns — Ebb at least dedicating their time and their attention to the smaller details. 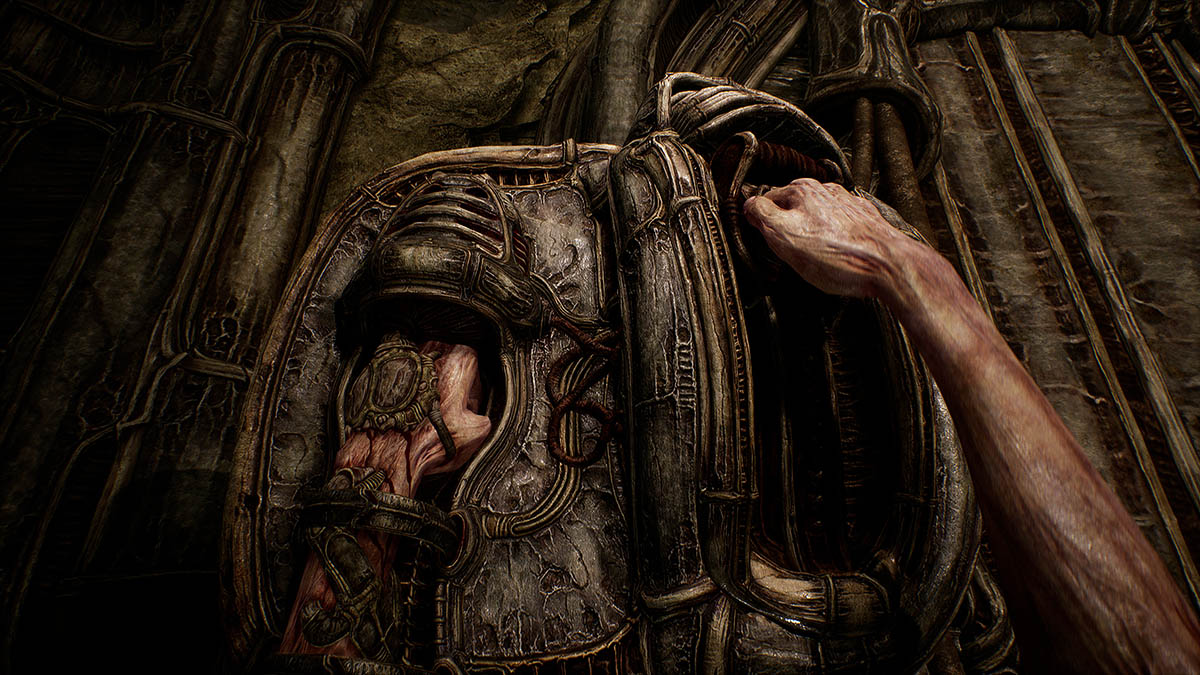 How particular patterns and architectural touches resemble bone structure, how interacting with certain objects in the game requires your player-character to place their limbs inside said objects, rather than simply on them. How the most interesting interactions and details of Scorn, if still encompassed in such an aesthetic, may well prove Ebb are acknowledging that imitation, impassioned may be, will only get you so far. But the team are at least committed to providing one oxymoronic vibe after another. Intrigued by its setting, while at the same time put off by some of its, shall we say, mannerisms. An expected reaction, but if this were all Scorn was as a game and not simply a means of observation, those brief responses early on as stated may have quickly dissipated into a feeling of tedium.

So it’s thankful then that Scorn‘s puzzle-solving — so too its overall level design, which in a way works almost as an extension to said deductions along the way — is as present and as worthy of highlighting. Equally prevalent surprisingly, as the visuals. Even if there may well be the odd occasion where one genuinely has no idea what the means of finding a solution, let alone the solution itself, actually entails. The only real concern that the unifying aesthetic can risk making puzzle-solving seem too vague. One interactive object looking almost the same as the other; the only real sign that’s not the trick, being a brief sound effect. But truth be told, even if some may think Ebb are treading an all-too-risky tightrope, with how much is out in the open, the studio look to have ultimately landed in an ideal spot that balances subtlety with player-made deduction. 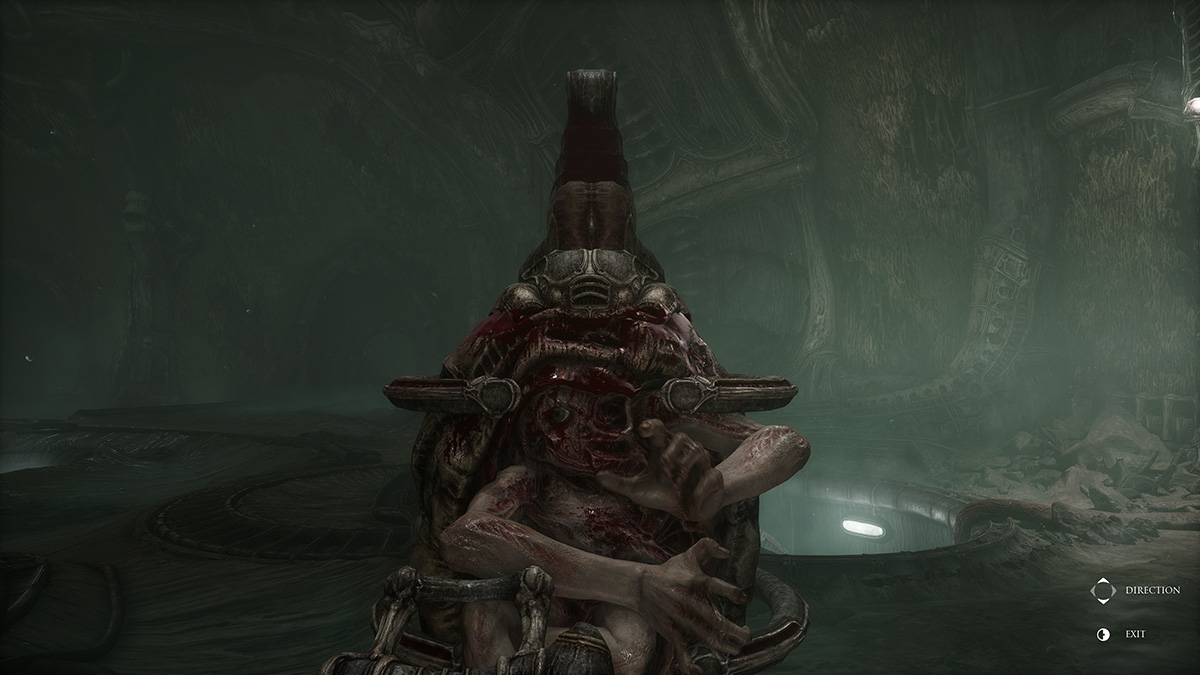 For one, interactive objects don’t weirdly glow at a distance or have map-markers that spell out what to do and where to go. Scorn in many ways feel antithetical to a lot of modern-day, mainstream AAA worries: the idea that players being left to deduce things for themselves and use their own smarts and prescribed perception of local surroundings is somehow a bad thing. But even at its most static — when puzzles needn’t require you moving objects from one part of the map to another — Scorn does a surprisingly good job at making you think. The idea that in its prologue alone a real head-scratcher of a Sokoban conundrum manifests, which does briefly feel odd, but ends up wonderfully orchestrated. Without spoiling anything, a minor inclusion in design added to on top that genuinely requires you to think three or four steps ahead.

And again, this is just the start of the game. The idea (or perhaps hope) that puzzle-solving of this ilk will only grow moreso in complexity and deduction, for puzzle enthusiasts like myself, is an exciting prospect. Not just on the basis of puzzles existing in this game in the first place, but in referring to the framing of Scorn, that this is anything but your run-of-the-mill survival-horror. That Scorn — in spite of the implications its visuals may bring — is more deductive adventure than anything. Survival present, “horrific”-like scenery (with an abundance of blood and particular sounds of organic origin) popping up naturally, but in terms of main design, is neither of these. That exploration, deduction, getting one’s bearings with the world/level design, are the focus. Even if optionally investable should the environmental storytelling pique your interest. 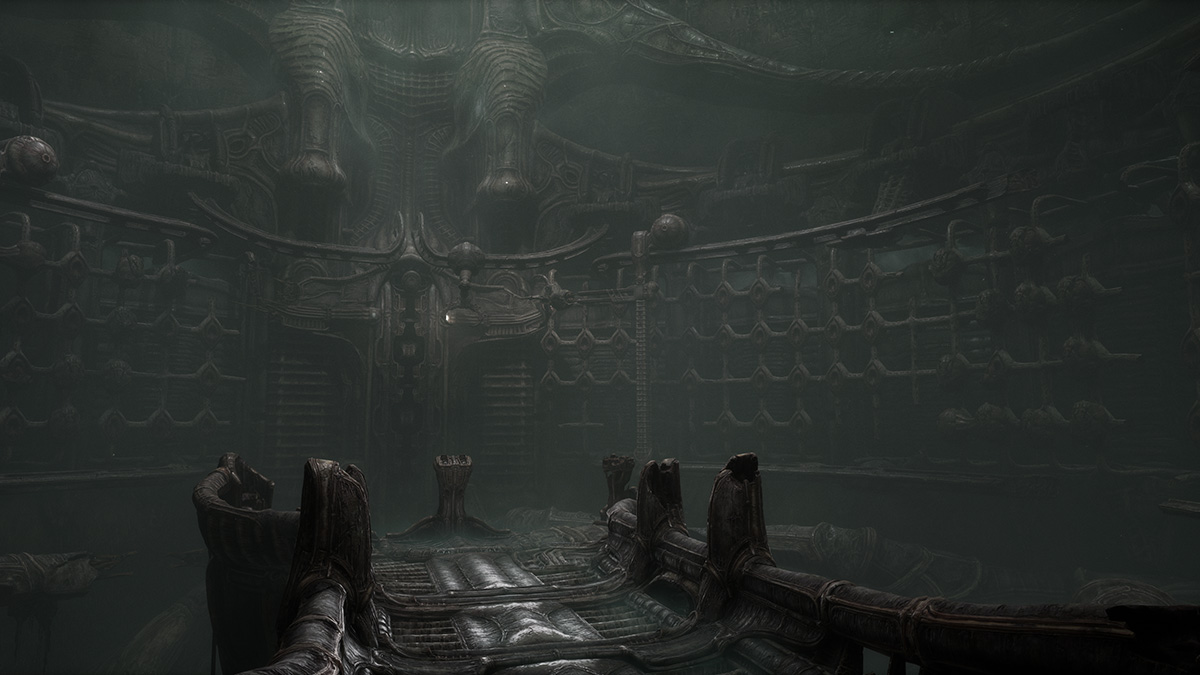 A reason — no matter how far-fetched or ridiculous that may end up being — as to this world’s very being, won’t go a miss of course, but it’s pleasing that on its opening hour alone, Scorn is proving so much more than a visual-only product. Hard as it is to deny the aesthetic and overruling direction will be the first thing many players will latch onto, it’s promising to see that Ebb Software acknowledging looks aren’t everything. Or in this case, looks of varying degrees of convolutedly-odd grotesquery. Perhaps that convolution will have its reasons and its grander resonance late on, even if in something as fleeting as shock factor. But it’s the game’s desire to have its players naturally explore and deduce just how this oppressive, bio-mechanical environment functions and unfolds, where Scorn‘s early promise shines most of all. Coming away from its prologue captivated more by its level and puzzle design, on top of Ebb’s desire to let players soak in the surroundings. At their own pace and of their own choosing too. To work things out for themselves — devoid of any such hand-holding or blatant sign-posting, beyond the simplest of outlining — could suggest Scorn‘s smarts are as impressive as its looks.