There are several notable indie games on my personal list of 2020’s most anticipated games, but sitting right near the top of the list is the roguelike action-platformer ScourgeBringer, from French developers Flying Oak Games. Ever since it was revealed nearly a year ago as part of Playdius’ rebranding as Dear Villagers, something about the combination of dazzling pixel art, lightning-fast gameplay, and a colorful yet eerie setting with a lot of potential for great storytelling, secrets, atmosphere and more immediately made me realize that there was something special here. And now, with the game set to arrive on Early Access in a few days on February 6, I was able to spend even more time with it and can now thankfully confirm that I am overjoyed at how ScourgeBringer is progressing, delivering a truly special and nicely chaotic piece of work. And now the only difficulty is in expressing said joy in a proper amount of detail.

Yes, it’s another one of those cases where “genius in its simplicity” comes into play and thus where I wonder if everything great about ScourgeBringer can be summed up in a sizable amount of words. Although part of this may be due to the fact that as an Early Access title, a lot of the story elements and secrets haven’t been fully included yet. The basic cinematic is up so far, though, and sets things up rather nicely. A mysterious Eldritch monolith appears in the sky, starts up the titular Scourge that kills countless innocent people, creates a post-apocalyptic world, and now a tribe’s strongest warrior, Khyra, heads inside the monolith to try and stop it. There’s a wise elder figure in the hub area and a mysterious shopkeeper that suggest more secrets to come, but right now, we get what we need. 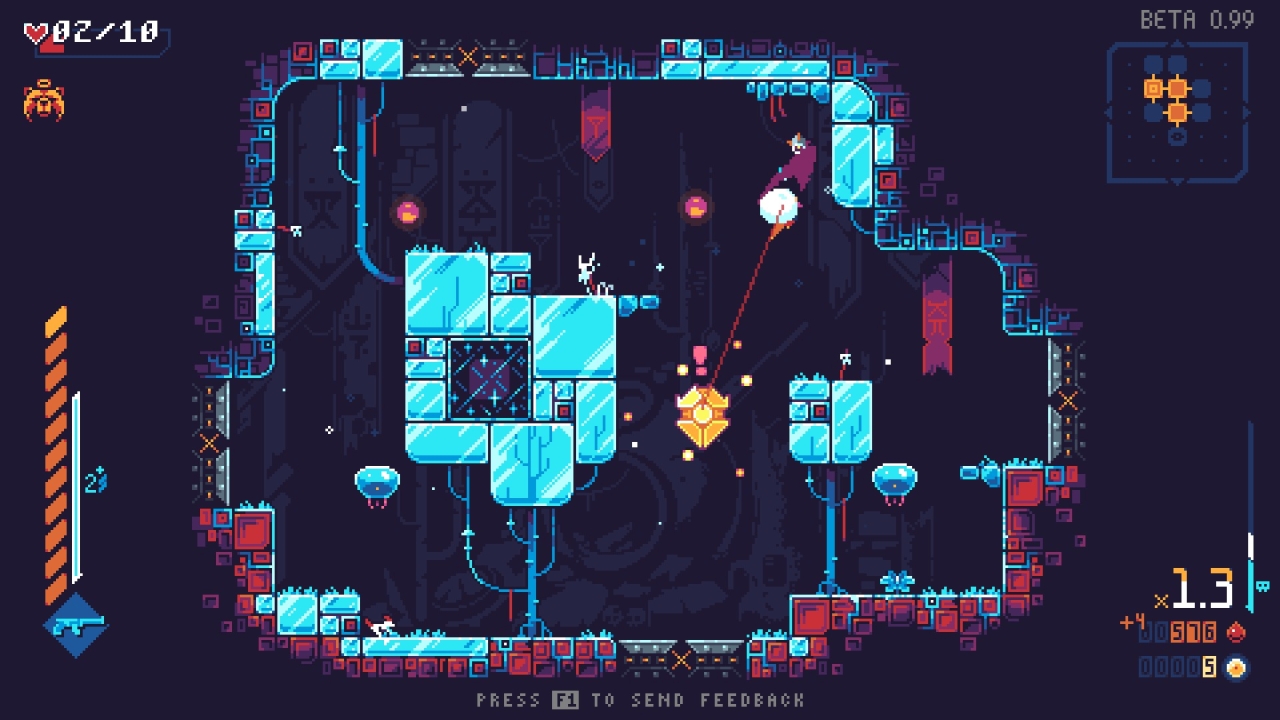 Storytelling, though, is not where ScourgeBringer’s greatest strengths lie, but rather the combat, which is, put simply, pure elegance. It’s just so unbelievably smooth and fluid, all while being easy to immediately get a hold of. Within minutes, you can suddenly master how to run up walls, double jump off of them, perform a dash attack that leads you over to an enemy, slash them to ribbons, perform a heavy attack on the enemy approaching you and fire off some shots on an enemy on the opposite side of the screen. All of this can happen within seconds and on single screens filled with multiple enemies. And it just feels amazing to pull off stunts like that with every new room you come across.

Exploring rooms is where metroidvania elements are sprinkled into ScourgeBringer and they work nicely. Progressing through each world means defeating the boss, but unlocking the doors to the boss’ chamber requires having to find and hunt down a mini-boss. In between that and combat, you also have the aforementioned shopkeeper to try and find, along with altars that provide various buffs, like extra sword damage, more items dropped per room, longer stun duration when hitting an enemy with a heavy attack and more. It’s your classic risk-versus-reward system that wants you to figure out if going after the enemies to discover new area beyond what’s necessary is worth it, especially when it comes to currency, and it works nicely. 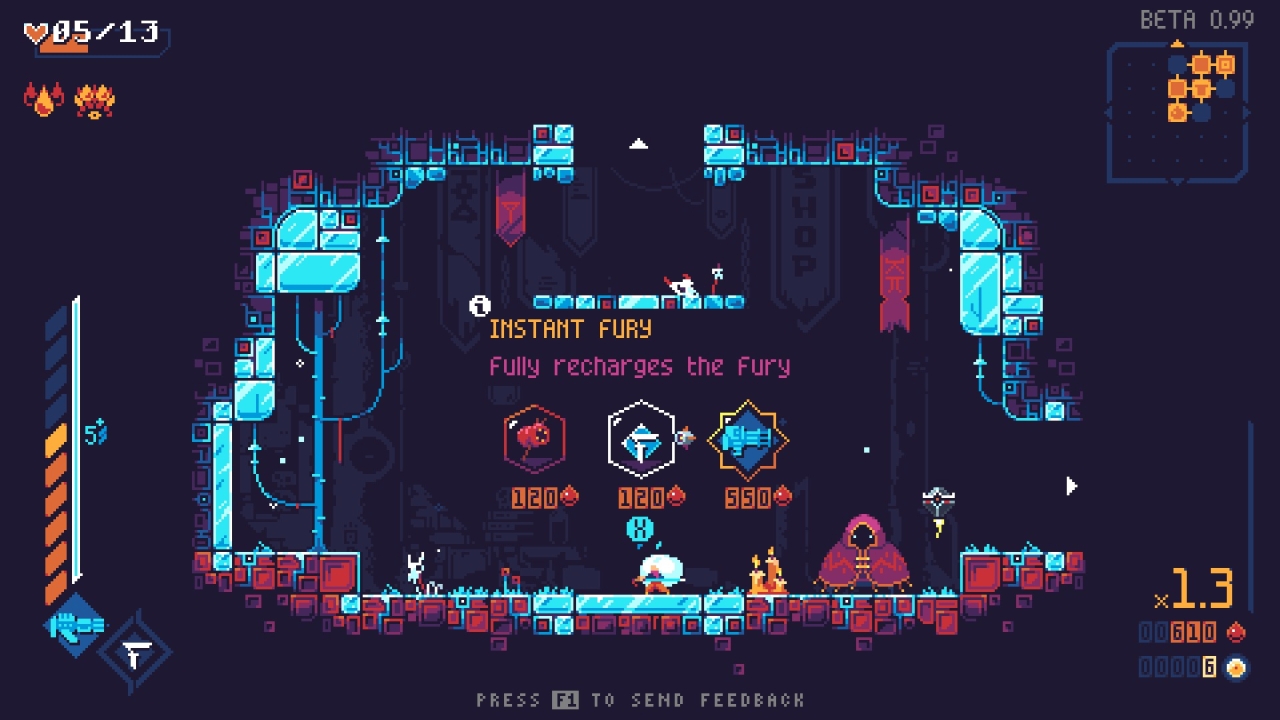 But indeed, the risk part should be emphasized. With multiple enemies coming from all directions, one mistake in your actions can mean the difference between life and death. Furthermore, health is scarce, and you’ll need as much as possible for the bosses, whose attacks can even dip into bullet hell territory at times and require you to master your skills. Luckily, bosses and mini-bosses reward you with points used for upgrades, which unlock combos, super attacks, a way to deflect bullets and even more abilities to work with, which makes things even more enjoyable. Also enjoyable are the graphics and art style, rich with detail, a nice blend of dark and vibrant colors, and put a lot of personality into the characters, like with how enemy eyes bug out when you stun them. Amazing little touches.

After several tries, I was finally able to amass enough upgrades and found enough weapons to take out the first boss. And it’s incredibly satisfying to barge in, jump up at the large stone seraph-like figure, stun them at the right times, slash at them again and again, blast them with a shotgun, and finally take them down…all without having touched the floor once. Despite having taken some damage in the process, it pumped up my confidence and I was excited to keep the action going. So I dived right into the second world, confident that I could handle whatever was thrown my way now. Needless to say, I was in for a rude awakening. 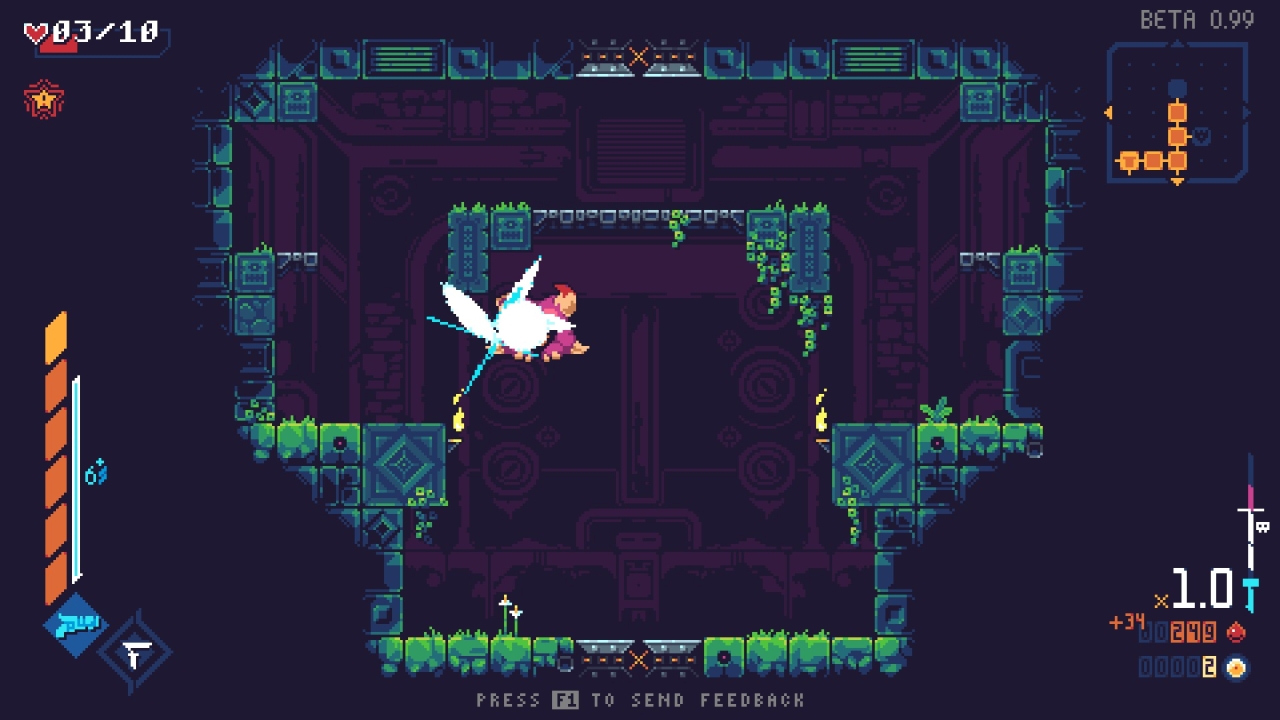 Alas, I was not prepared for enemies that could lock on to you and fire lasers, or enemies who could fire slower bullets that you have to maneuver around, let alone groups of them. Funnily enough, the mini-boss in this level was actually easier then the one in the first world (on one run, I took them down before they could even fire a single shot). But it shows how there’s always something new to learn in ScourgeBringer, be it new enemies to deal with, upgrades to master, and strategies to figure out. It has a perfect level of challenge right now, which is essential for any action-packed roguelike.

That being said, I was reminded of another roguelike action-platformer from last year, Black Future ’88. ScourgeBringer has a lot of similar aspects that makes it great, but also one of its flaws, namely that its action can almost be too fast at times. But instead of zipping through its story like Black Future ’88, here it zips through its enemy roster and level designs. It doesn’t take long for rooms to repeat themselves and you’ll likely experience what every enemy has to offer in less than an hour. But again, this is an Early Access game right now, meaning kinks are being worked out and more content is to expected later. Still, while it doesn’t detract from the fun, here’s hoping the developers can fit in as much variety possible. 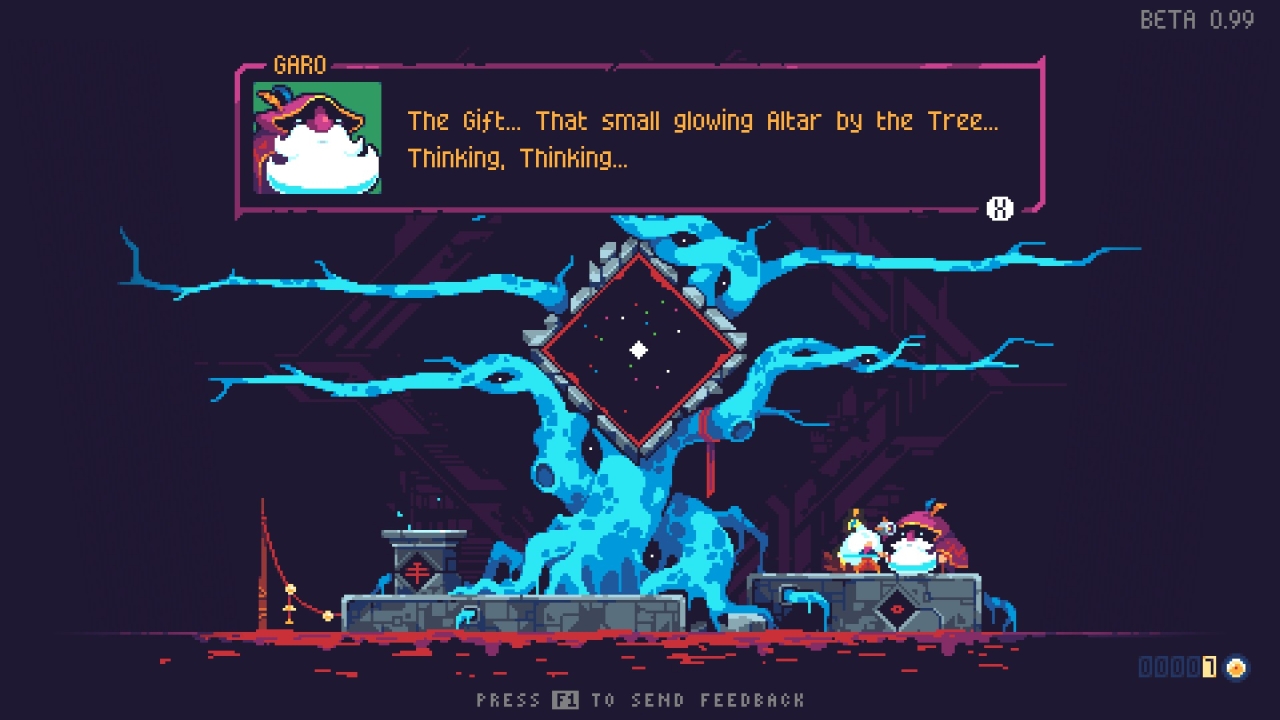 ScourgeBringer, to put it simple, has all the makings of an absolute classic. It has the challenge level fans of roguelikes and Nintendo Hard platformers enjoy, but gameplay that’s fun and accessible enough for everyone else to enjoy as well. Top it off with dazzling pixel art and stellar combat mechanics, and there’s no reason a game like this shouldn’t be a success. But Flying Oak still has more planned for when ScourgeBringer is (hopefully) released later this year, so here’s looking forward to what else they have in store when in arrives on PC and Xbox One.