There is no shortage of Diablo-clones to be found on the Steam store nowadays. Unfortunately, there are many of middling quality to be found and ones truly of note are a rarity. Same can be said for the Early Access program itself and the titles found on it. Shadows: Heretic Kingdoms is one of those Early Access clones, and it’s not too shabby. The game throws you into the shoes (ethereal form?) of a demon, contacted by a mysterious hooded man in the hopes of forming a pact to take on a power that threatens the world. 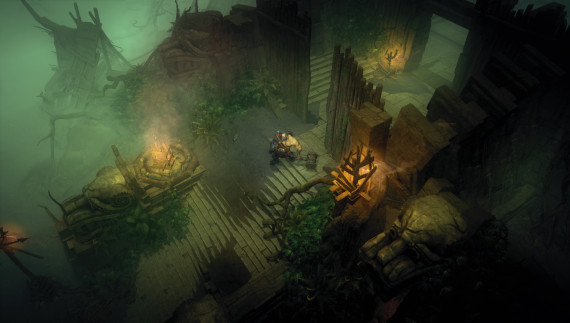 This is very much your typical point-and-click affair. You will spend the majority of your time hovering over baddies, making your best attempt to kill them while looting everything in sight. There’s a reason little has been done to switch-up this addictive formula over the years – it just works. That isn’t to say that the game is devoid of unique ideas, mind you.

While you begin Shadows as a recently summoned demon, you only have to fight through a quick combat tutorial before you’re given a choice of protagonists. Shadows offers your typical suite of fantasy archetypes: the warrior, the rogue and the mage (eventually. Mages aren’t available in the current build). The rogue fights from a distance, using speed and mobility to control every fight, whereas the warrior dives into the thick of things and uses strength and endurance to tank through battles. 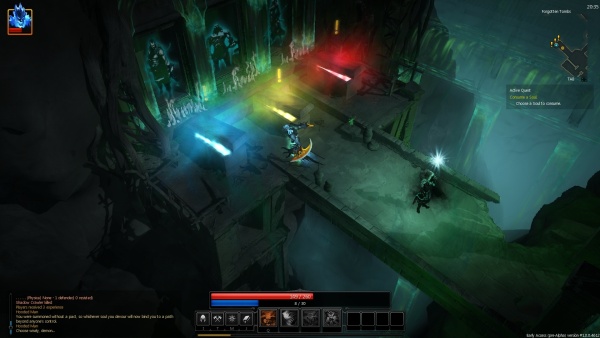 Shadows is unique in that it offers two different battlefields for your hero to conquer. You can jump between the world of the living and the nether realm from which your demonic companion spawned. In addition to creating more varied combat scenarios, this world jumping mechanic allows for some light puzzle solving. Broken bridge in your way? No problem. Your demon can float right over the gap. Problem solved… except now you have a host of otherworldly monsters to deal with. 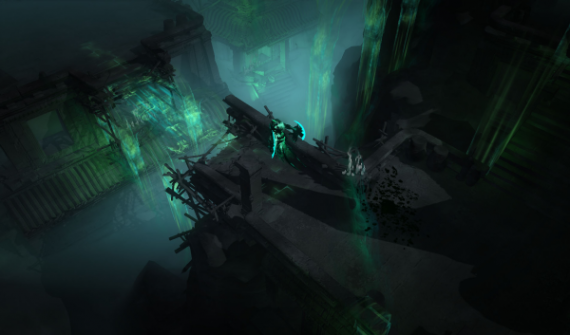 Health is also handled in an interesting away. While equipment, skills, and of course potions can be used to heal, the game also incorporates a ‘soul’ meter. This allows you to collect the souls of fallen enemies, which can then be converted into health.

One thing I feel will hold this game back is its simplified skill system. Each class is broken into three different skill branches, all leading to the class’ champion skill. While the game gives you the opportunity to take on all the skills in the game, you need to put at least one point into every one to gain access to the entire tree. You don’y get to pick and choose skills to fit your preferred playstyle. Instead you need to go down one of the three specific paths and build your style around that. 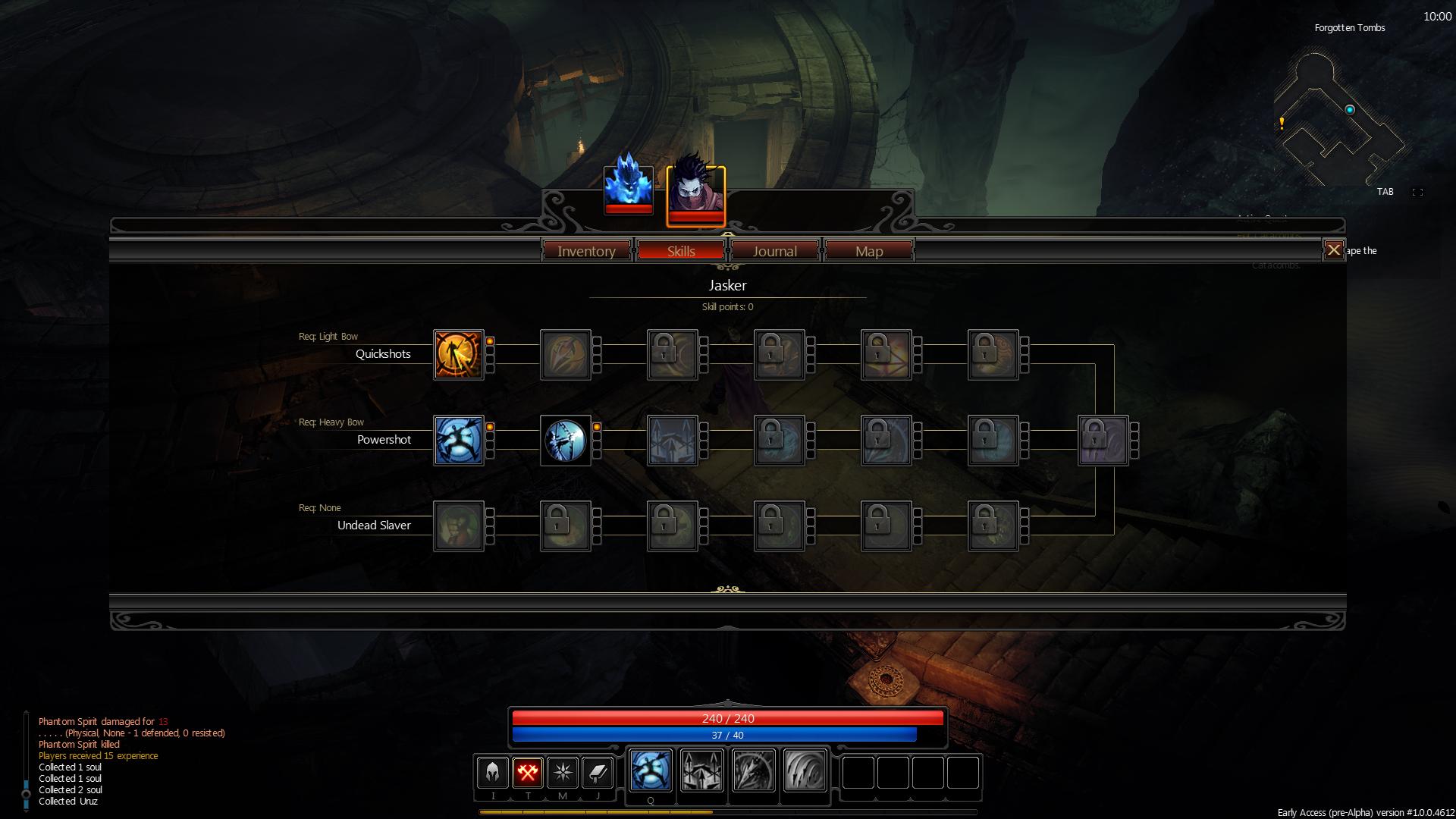 On a technical level, Shadows is a mixed bag. While certainly not the best on the market when it comes to its graphics, the game’s overall world design is impressive. It should also be commended for its use of particle effects and lighting. There’s a wonderful, moody atmosphere that permeates the game, aided by a solid musical selection and excellent sound design.

That said, there is a lot to be addressed when it comes to performance. Even with a GTX 680 and an i5 processor, the game is sluggish on max settings. There’s only a moderate difference in frame rate between the lowest and highest settings, although the visual difference is night and day. Weirdly enough, turning down some options actually resulted in a loss of FPS, not a gain. Obviously the game is still in alpha, but it needs a lot in the way of optimization.

My rig was able to maintain a stable 30-60 FPS most of the time, and this genre has never needed a particularly high frame rate. However, such high performance demands will prevent the game from reaching  a wide audience. It’s practically unplayable on even mid-range rigs.

Shadows shows a lot of promise, thought it isn’t without its share of issues. Many of its problems can be attributed to it being in alpha, but I also have concerns with its overall design. It has a number of cool ideas, but this early access build doesn’t make the best use of them. The game feels overly sluggish, the skill tree is far too limiting, and the dynamic between the two playable characters isn’t yet handled in an interesting way. 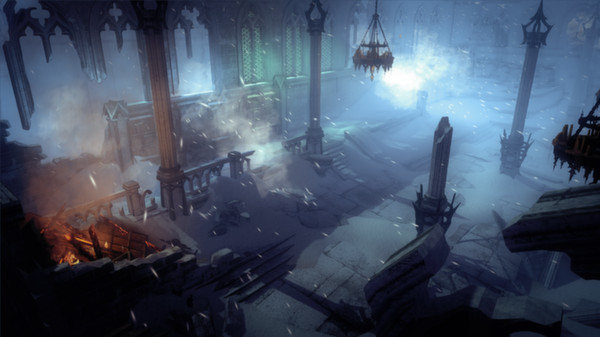 Despite its issues, Shadows is of remarkably high quality for an alpha build. With what’s on offer at this point, the game has a lot going for it, and it’s only getting better going forward. I’m just questioning whether or not, once the final release comes, it will have enough going for it to stand shoulder-to-shoulder with the titans in the genre.

With only a sixth of the game’s content available at the time of writing, I can’t recommend picking up Shadows: Heretic Kingdoms just yet. Do keep an eye on it, though, because there’s a very solid experience waiting to be realized here.