There’s an invisible force in games that no amount of screenshots can convey, and even video has a hard time getting the point across.  It’s not something that art design or detailed graphics can help, although fancy camerawork can aid in faking it.  One of the most important aspects of a game is feel, how the character reacts to controller input and the moves fit together.  Whether you’re playing a slow, lumbering behemoth or zippy ninja, if they feel right to control then that can overcome any number of shortcomings.  Shady Knight is a game that fully embraces its hi-res PS1 art style, and while its demo may not have the most detailed levels or enemy models, that’s more than made up for with a control scheme that feels fantastic to use.

Shady Knight is one of the demos released for the Steam Summer Game Festival and it’s a new version over the one released for last September’s Humble Monthly.  The current version contains three towers with a power orb at the top of each one, three secrets per level to chase after and two types of enemy to break out a surprisingly deep moveset against.  At the start you’re bare handed, which is not even close to being defenseless.  After a few tutorials on movement, sliding, kicking and hitting jump near a ledge to mantle over it, enemies start showing up to use those skills against.  As it turns out, that kick move is a lot more versatile than it looks. 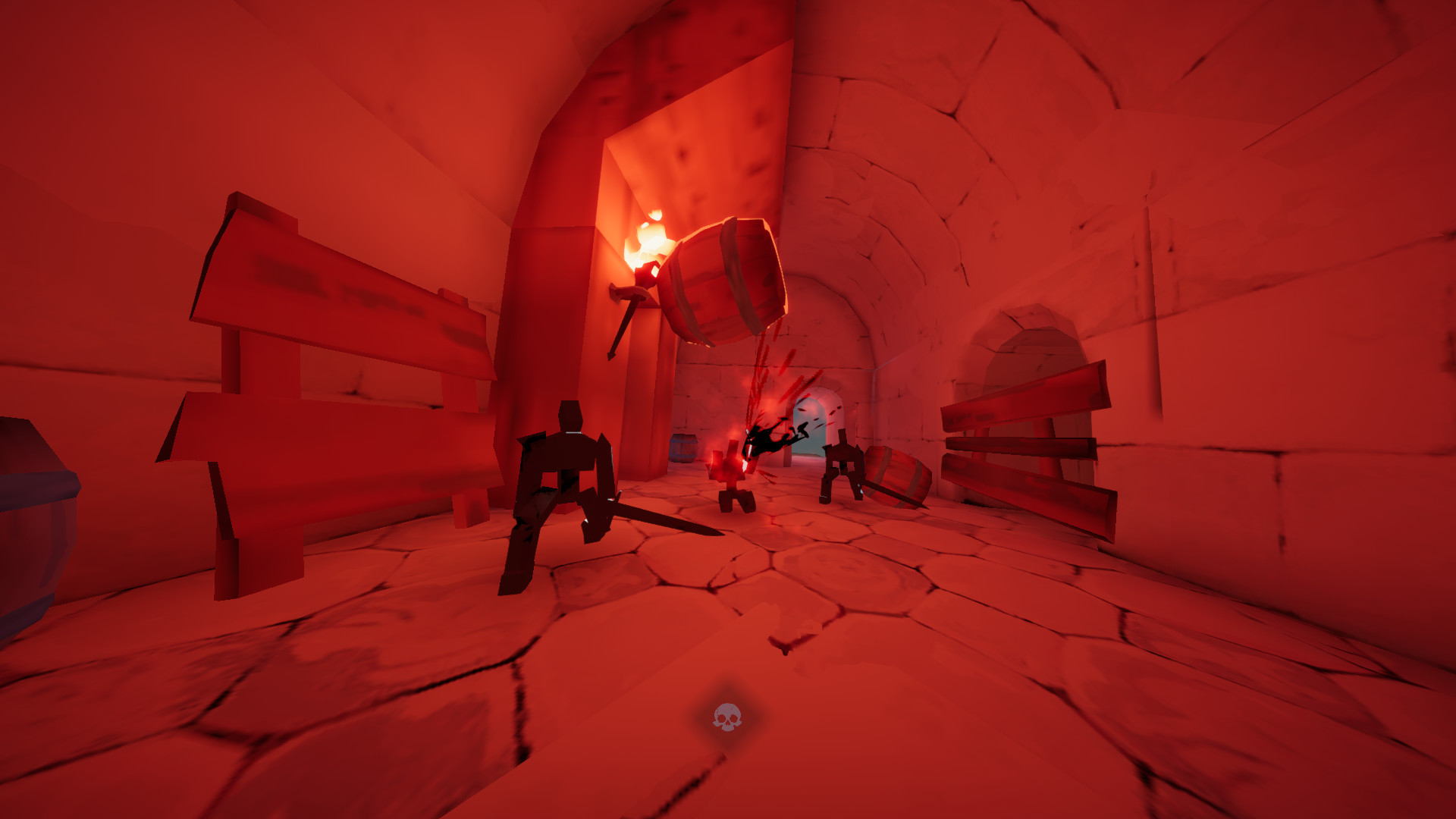 Each room in the tower has a few props in it, generally barrels.  While kicking one of the low-level spiders can send it flying, that doesn’t do much damage, but kicking it into a barrel is a different thing entirely.  Other kicking options include obvious spike traps on the walls or even holes in the wall that lead to the ocean far below.  Maneuver right and you can kick a stupid spider right off the tower, killing it in a single hit.  Every room has a number of options available and that’s before you find the sword.

There’s nothing special about the sword and all the human enemies drop them on defeat so there’s no reason to get attached to any particular weapon.  It’s a black disposable hunk of sharp metal, but at least it does more direct damage than a random kick.  The secondary abilities, on the other hand, are a blast to play with and turn each fight into an improvisational dance of blocky violence.  Charge up a swing, jump into the air, and the move changes to a powerful overhead chop.  Hop on top of a crate, however, and the move gets powered up again and can send enemies flying into the air in slow motion, ready for a few slashes or, better yet, another kick to bounce them off the ceiling.  Alternately you can start a swing then hold down E (which is usually kick) and it changes into a sword throw.  Plus if you’re good at knowing where your feet are in first person there’s always the option to hop on enemy heads, bouncing from one to the other if you’re particularly good. 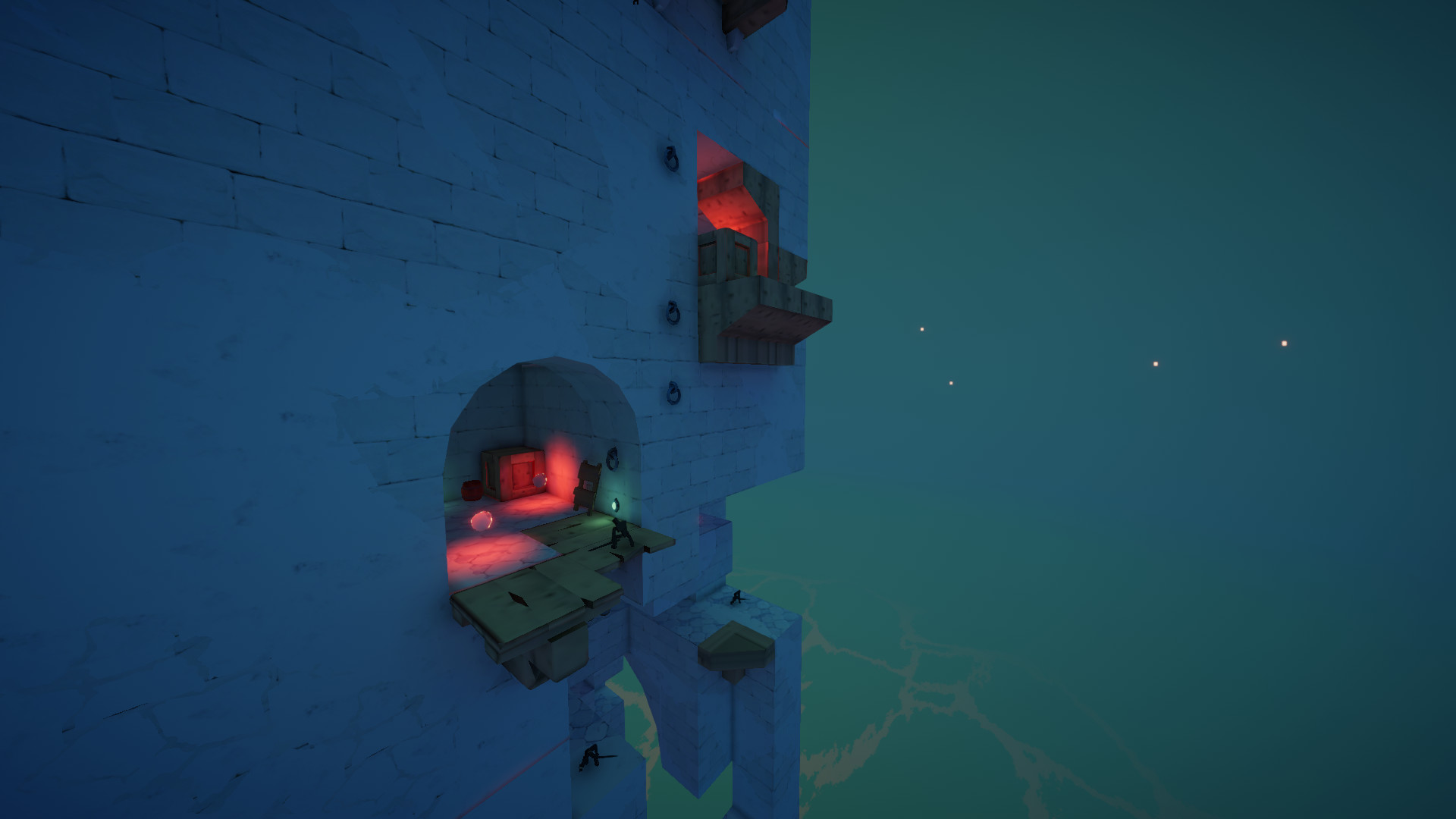 While there’s a good amount of combat, the player’s moves are also put to the test with solid first-person run & jump action.  Shady Knight is by no means a platformer, but it’s levels are towers, with all the verticality that implies.  The standard path up the tower is straightforward, at least on the three levels on display, as you hop from walkway to dangling chain or a handy ring on the wall.  Go searching for secrets, however, and it requires maybe a little too much pinpoint precision.  Even just accessing the credits hidden in a crypt right at the start of the demo requires both a perfectly timed jump and grab onto the platform.  Thankfully death outside of combat just means respawning at the last point your feet touched the ground, letting you try over and over and over again until either nailing the jump or deciding to go elsewhere.

What makes Shady Knight work so well is that the move set is both simple and deep.  The slide move is Q and that’s also the button to pick up a weapon.  Slide over a sword and tap Q again and you’ve armed yourself with style.  Personally I’m more fond of kicking the sword into the air and grabbing it, but it’s nice to have options when you’ve chunked a weapon into an advancing soldier and need to re-arm without slowing down.  For an added bit of flair during the slide you can also hold the E key, which primes a kick and also activates slow-mo for a moment.  Want to kick a spider into a torch to set it on fire?  It’s the perfect move for a little improvisational immolation.  The combat is set up so that you can play as boring or fancy as you feel like, but the more you realize you can do the harder it is to stick with a simple sword slash.  Each tower is a battle playground, and even though there are only three at the moment, they’re fantastically replayable.

The Shady Knight demo is part of the Steam Summer Festival and available for a few more days.  This is not one to sleep on so head on over and give it a download.