Saturday mornings are the best mornings.  A bowl of pure sugar wrapped around just enough fiber to pretend it’s breakfast, no major plans for the day, and a Captain Forever cartoon marathon to complete the hyperactive brain overload.  And then your little brother Kevin wants to play, so what do you do?  Play Captain Forever, of course!  You’re the hero, he’s the villain, and the solar system is the stomping ground for an epic battle of good versus bratty.  Kevin has turned all the animals into grumpy enemy pilots, frozen the sun, played a little too rough with the planets, and in general acted like a giant butt.  Then again, he is playing the bad guy, so that means he’s doing a good job.  As Captain Forever, though, it’s your job to stop Kevin, and he’s waiting at Pluto if you can survive long enough to reach it.

Captain Forever Remix is a complete re-imagining of the Captain Forever series, the original of which is still completely free and playable in-browser.  What this new version brings to the series is something that was a little short in the original, and that’s personality.  There’s an ultra-colorful cartoon vibe running through everything in the game, from the character designs  of the two main kids, the mutant animal enemy pilots, and even the little blocks you scavenge to create your battleship on the fly.  You and your brother are fighting for the solar system in a world of pure cartoon imagination, and it’s anything but bland inside their heads. 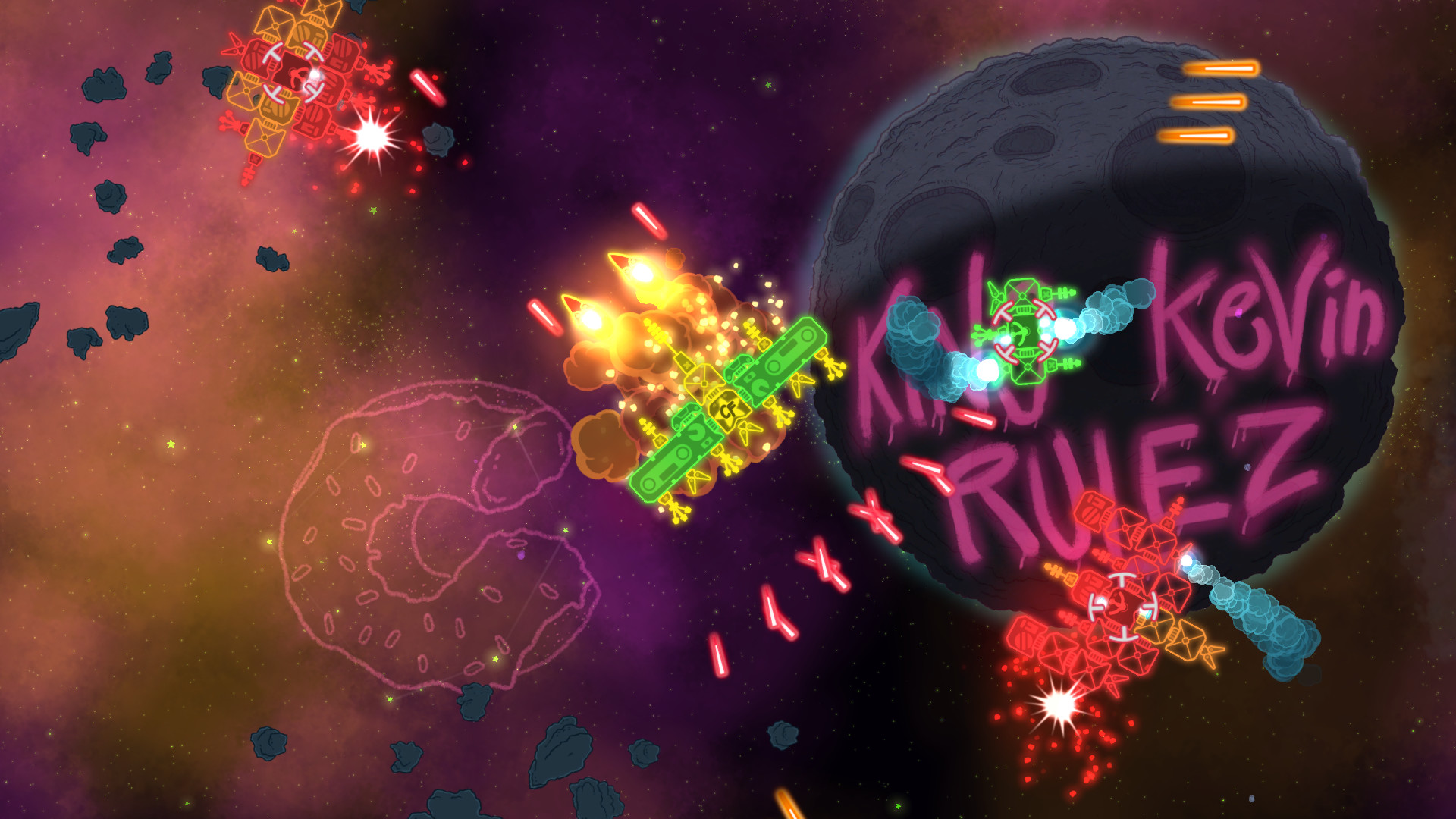 The main gameplay of Captain Forever Remix, however, will be instantly familiar to the series’s longtime fans.  You start each attempt with a main block that must be defended at all costs, plus a nice selection of low-level ship components you can hook together any which way.  Each of the different kits has its own unique set of weapons available, but the basic startup tends to be 3-4 single-block hull components, a pair of weapons, and a pair of thrusters.  Initially you start off with only one kit available, which is a basic one with two lasers, but different starting loadouts become available as you reach new goals.  These are just the starting toys, though, and the ship you end up with will bear no resemblance to the one you start because its makeup is completely dependent on what you can scavenge from defeated opponents along the way.

Both you and the enemy fighters are made from the same pieces, and once you’ve taken out their core you can scavenge anything that hasn’t yet been destroyed.  Hull parts, different types of thruster, lasers in various forms, missiles, plasma shooters, saw blades, and more are all available to a careful pilot.  You can go in blasting everything that moves but that quickly turns into a war of attrition.  You need the bits your opponents leave behind, and they won’t leave much if you charge in blasting without a plan.  Each encounter is its own opportunity, and even if the enemy is a low-level nobody that can still be useful later on.  The parts left spinning through space are persistent for the entire level, and it only takes one bad duel to make even low-level equipment worth scavenging. 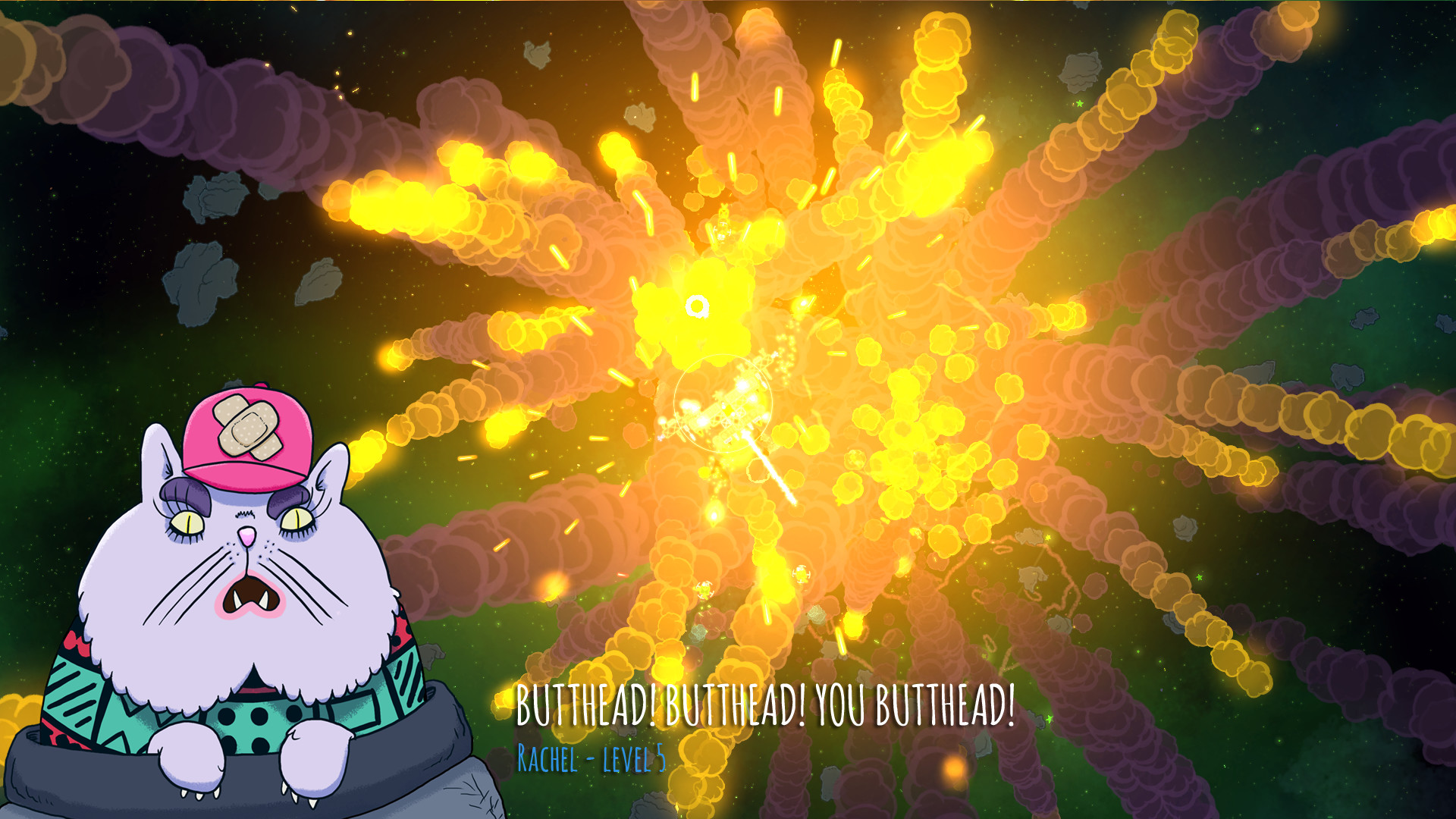 Each planet of the solar system is its own level, mostly populated by enemies of that level or lower but with rare bigger ones patrolling as well.  Beat one of those enemies and everyone runs away as you prepare for the next planet, with a decently-lengthy rest period to reassemble the ship from whatever may be lying around.  The area boss was higher level, after all, and with a bit of care in the battle there’s a range of stronger goodies floating there waiting to replace your now-outdated components.  Stronger hulls that take more damage, guns shoot faster, thrusters are thrusty-er, etc.  The next planet’s enemies are going to be bigger and more ornate, most likely with guns poking out from every surface, and spaceship battles are much more fun when you’re not making due with old tech.

Even with a good ship, however, defeat is initially inevitable, but each enemy destroyed earns cash you can use to upgrade three of a specific loadout’s stats.  The sniper ship, for example, can have its critical hit chance upgraded, increase the build time between levels, and buy a permanent laser-sight to show exactly where your shots are going to go.  Other kits may come with a percentage chance to heal after each defeated enemy, evade shots, or all salvage being received at full helath.  The kits need to be individually upgraded, but once you’ve got a favorite unlocked it’s just a matter of sinking all your cash into its abilities.  On the one time I made it all the way to Pluto I ended up with well over $200 in the bank, which bought a nice number of goodies for the next attempt.  Pluto also saw the relatively calm space of the early planets packed with huge enemies bristling with weapons, harrying my every move and leaving very little time to scavenge parts from any enemies I managed to defeat.  The forces of King Kevin emerged victorious yet again, but my ships designs are getting more ornate and effective, and the perk bonus are starting to add up.  The little brat is going down soon, and Saturday morning will once again be saved by the heroic abilities of Captain Forever.