Like any peculiar concept that takes off in a surprising way, deck-building  — in video game form — has flourished almost into its own designated sub-genre. Whether it’s nostalgia for the tabletop games of yonder (as much the here and now), the pure novelty of gameplay mechanics revolving around digitized equivalents of those same rectangular playing cards, or maybe something else entirely. New IPs, established ones, and those yet to release though already leaving quite an impression. Be it the planes of online competitiveness or a unique means of delivery for progression. Like it or loathe it, deck-building looks to be staying a while — bolstered no doubt by its immediate success and of the inevitable sprouting of developers looking to find new and interesting ways to blend this approach into proceedings. Regardless of how closely tied you are to its traditional tabletop roots, it’s hard to knock the appeal of deck-building — of rising, as much falling, by the grace of one’s decisions. Decisions made long before a single turn has been cast.

Castlehold‘s presentation may seem small and miniaturized. A mere nineteen hexagons to a grid that even in the context of the premise — far-flung eras of history, all winding up in this distilled, concentration of historic periods — looks isolated. A small, lonely island that suggests that not much is about to happen. No world to explore, no grander tale to unravel, no reason to get that invested in the strategy unfolding. A simple game or two and then it’s all over, move on. What reasons are there for 5th Cell — whose, arguably, most regarded IP the Scribblenauts series feels a million miles away from this set-up — to find themselves having a go too? Even if the concept of those games similarly revolved around this same idea. Players using as much their imagination, let alone the tools at their disposal, to deduce the correct path forward. 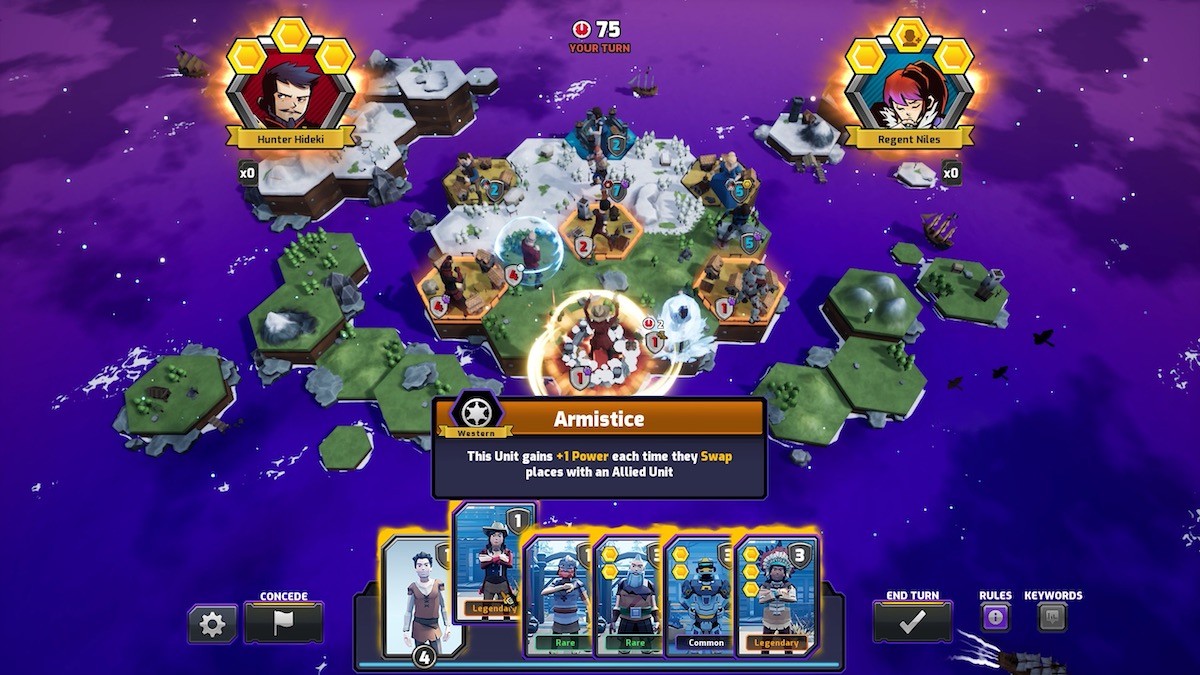 Perhaps it’s that very limitation that in fact plays well into the hands of Castlehold as a deck-based pitch. Almost as if 5th Cell have already played their hand and from the get-go. A mere nineteen hexagons there may be, it’s surprising just how branching and tentative a quick game (or perhaps quick should be emboldened with many a quotation mark there) of Castlehold can end up being. Easy to grasp the primary objective may be — take out the opponent’s unit standing on the corresponding stronghold and secure it, to win — the potential routes there are both plentiful and bountiful on top. And that’s not just due to the prized settlements that grant players currency which serves as the means to draw stronger, higher-tier units into the field. Yes, gold to spend is better than no gold at all, but where Castlehold deviates in this regard is acknowledging the thrill of the underdog. To offer support to those who may not want to play it quick so as to secure victory as soon as possible.

It was pleasing to find that, when asked, that the developers did indeed confirm that playing the long game in Castlehold is a viable strategy. Not least because here, your deck does not regenerate — each player is granted a deck of twelve cards, and twelve cards only. The moment that corresponding unit is wiped off the board, they’re gone. Meaning that it could be the case that you slowly chip away at your opponent’s deck — have them continue spawning units to protect their stronghold until there’s literally no one left. Naturally, the ever-present threat of passive and supportive traits is commonplace in Castlehold. And while that does mean you can potentially run a game where all your best, support classes are beefing one another’s traits to seemingly double-digit levels, that patient build-up naturally plays the other way. Some units simply getting stronger on their own the longer they’re left alive. 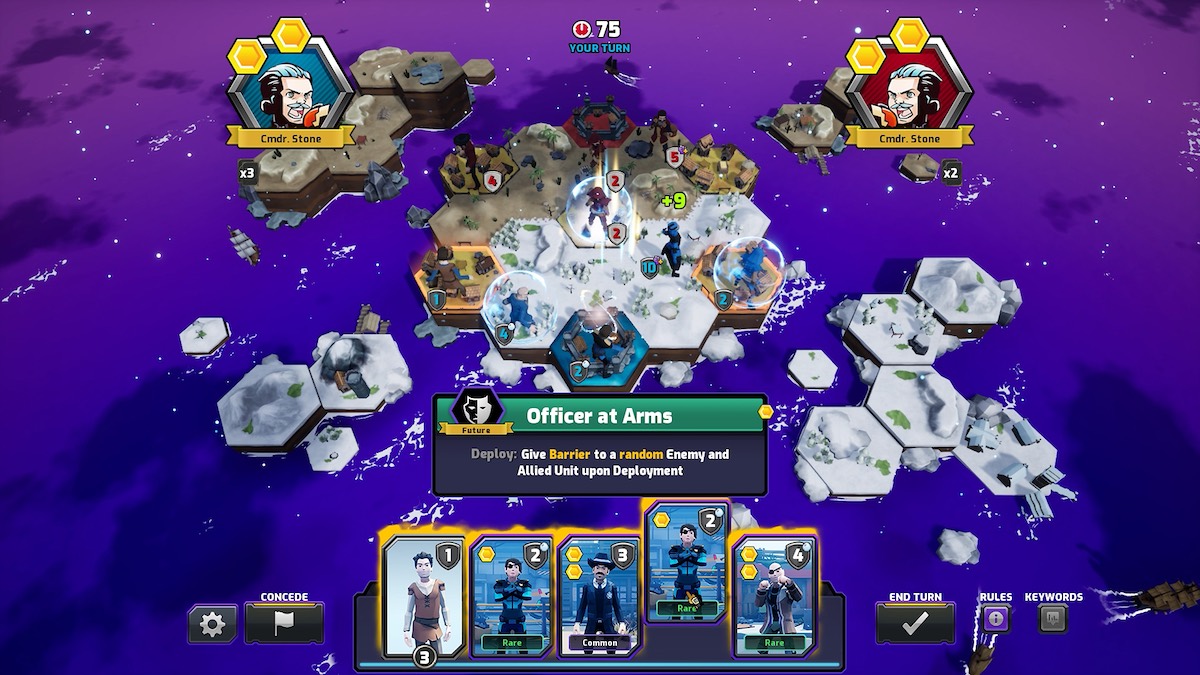 Much like any great card game or even chess for that matter, the trick isn’t so much to play your best hand, but to “play” the hand of your opponent. To draw them into a scenario they have little means of escaping or at least providing a sound counter to. And while it may seem limiting given the scale of the grid, the reality is that because there’s so much of this interconnected tinkering to consider — spaces and the very positioning of adjacent elements, providing as much a benefit to present stats as passive traits do — playing turn after turn of Castlehold almost always feels like one precarious step away from disaster. A pressure in no way aided by those aforementioned threats in your opponent’s deck — the units that only get stronger the more turns that pass, or the very probability that a simple move forward has their attacker’s stats utterly dwarf your equivalent. And the fact that one can’t even chip away at that dreaded defense number. That a littering of units with a 3 or 4 by their profile can’t just dog-pile that beefy 11 or 12-stat unit — an intentional design choice 5th Cell explains to me — means that establishing a resolute affinity amid your deck is vital. Just as vital perhaps as recognizing just how wildly your deck’s stats can shift.

As impressive as it is that 5th Cell have found a way to condense this circuit-like web of interaction and interplay between your deck’s individual units, perhaps one of the more commendable efforts, from the studio themselves, is the way Castlehold handles the aspects outside of its core gameplay. Namely the monetization model of the game. Naturally, there are countless cards to collect and eventually browse through in your attempt to compile the best possible deck and one of the ways to increase one’s collection is of course through the in-game store. But while readers may, at this point, offer a combination of sighs, groans, eye-rolling or maybe all at once, as 5th Cell themselves explain, there’s an understanding from the studio side of things that players are long past the days of gambling. Of putting down money in the hopes of getting something better, rather than being guaranteed such. The solution, it seems, is the ability to re-roll the cards you acquire from out such a draw. But there’s of course risk to this; when asked if, for example, players gamble a “Rare” unit, there’s the possibility that a lower-tier “Common” will show up, 5th Cell confirm this may indeed be the case. While it may not sound like the ideal outcome for players to hear, it’s a sensible middle-ground to offer. 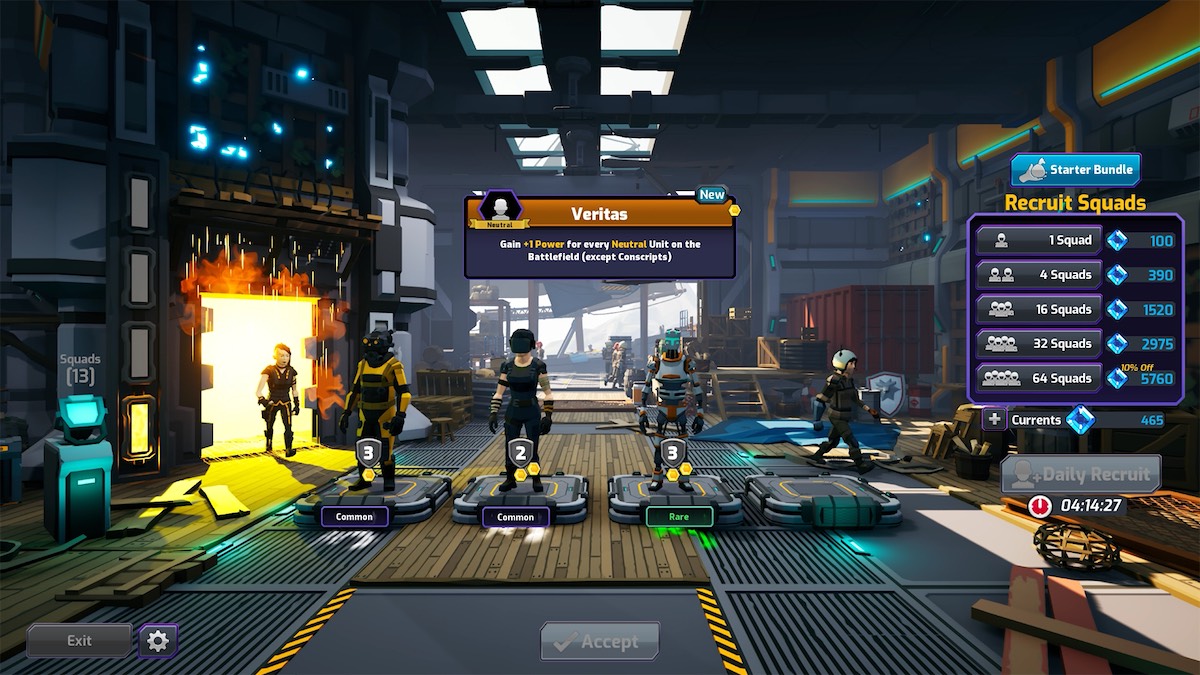 One of many reasons why we should be hopeful for a game like Castlehold. From a studio whom, like so many, have leapt at the opportunity to get into the deck-building craze at present. Yet, fortunately, look to have approached this with both understanding of mechanics as much acknowledgment on how to handle the inevitable monetization that some players will no doubt be drawn to. The most impressive thing though about Castlehold remains that feeling of trying to pick out so many an invisible string that no doubt is binding your deck together. One foolish move to the tile on your left and before long that connection could be severed. A feeling made even more impactful given it all takes place in the confines of a hexagonal grid less than twenty spaces dense. To think such a confined space could open itself up to so many possibilities — short-term and long-term alike. 5th Cell have no doubt tapped into the art of stewing over relatively straightforward turn-taking, but it’s that dread of letting loose that desired buff or helpful aid where the push-and-pull attraction of Castlehold really takes hold.