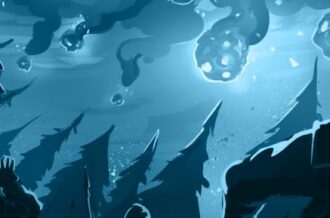 Godless Could Be a Heavenly Delight for Strategy Fans

Hard as it may be to rely on one specific homage or influence and still stand out, it’s harder still to rely on several. Admitting to such or otherwise, it doesn’t take long to list off the various names after only a few minutes of Demonschool. Persona should be obvious even to those unfamiliar with the series, but then you notice other flashes through both gameplay and overall presentation alike. Into the Breach, Octopath Traveler, all of this lying on top of other inspirations Demonschool’s Creative Director, Brandon Sheffield, reveals during one’s recent time with the game. Italian horror films of the 70s, the era of early 3D games in all their jagged polygonal make-up and attempts (some good, some not so good) at creating the illusion of a world with depth.

Not for the first time do we have a game like Demonschool that’s pulling from so many corners and thus making it all the more likely, at any one time, it’ll come crashing down under the weight of its own ambition. Its love of tactical and turn-based RPGs alike, of both past and present persuasion, maybe getting the better of itself. But it doesn’t and while the speed at which one can so easily get caught in the peril of combat is due credit, perhaps part of that reasoning lies in the game’s justification for casting so wide an artistic and indeed nostalgic net. Because Demonschool, as quick some may have been, when it was first revealed to compare it to Persona (again, not entirely unwarranted when you take the high school setting and the user interface, particularly its indicating date and time of day), it’s welcoming to report that such comparisons have in fact been one of the lesser-prominent take-aways. 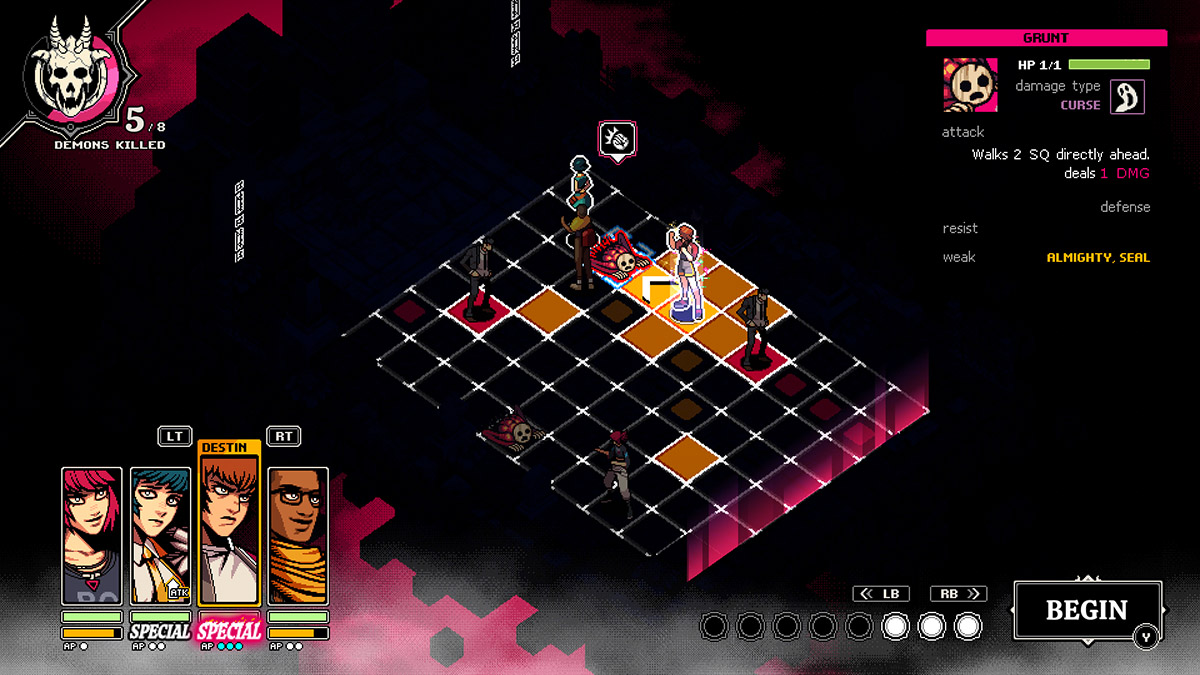 And it’s specifically with the game’s reasoning for drawing in so much of its past inspirations that’s the highlight. How all talk of early 3D games exists not for mere nostalgic brownie points, but as Brandon so commendably explained to me during the hands-off part of one’s session, but as a means to recapture that period in time where video games were entering that next nervy-if-exciting plot of unknown territory. Nothing but the prospect of grander worlds to envelop yourself in, driving creators to see how a third dimension could shape things. That meddling with the unknown is in a way befitting of the premise Demonschool revolves around. Of hopping into a demonic world deprived of human understanding — even going as far as to, leading into the demo’s main boss battle, shift perspective to that of ground-level, fully 3D rendering. A far cry from the regular isometric, pixel-art niceties, in welcoming in its more demonic other-worldly presence.

The more you stare at each one of its combat encounters — its assembly of sprites, pixels, voxels, particle effects and low-poly 3D models — is the moment that concern on a house of cards ready to collapse stirs. Perhaps it’s Demonschool‘s assuredness of its own intentions, or maybe it’s just the fact the combat of the game is so easy to apply (albeit a touch more challenging to master), where those early concerns so quickly melt away. Just like how the transition from human world to demon world acts like the scenery itself is melting into the unforeseen manifolds of time and space. For all its wonderful use of color and lighting — and just how much detail is crammed into this tiny, compacted, grid-based arena — it’s a no-brainer to say the combat is where both the game’s as much the player’s own smarts are put on full show. 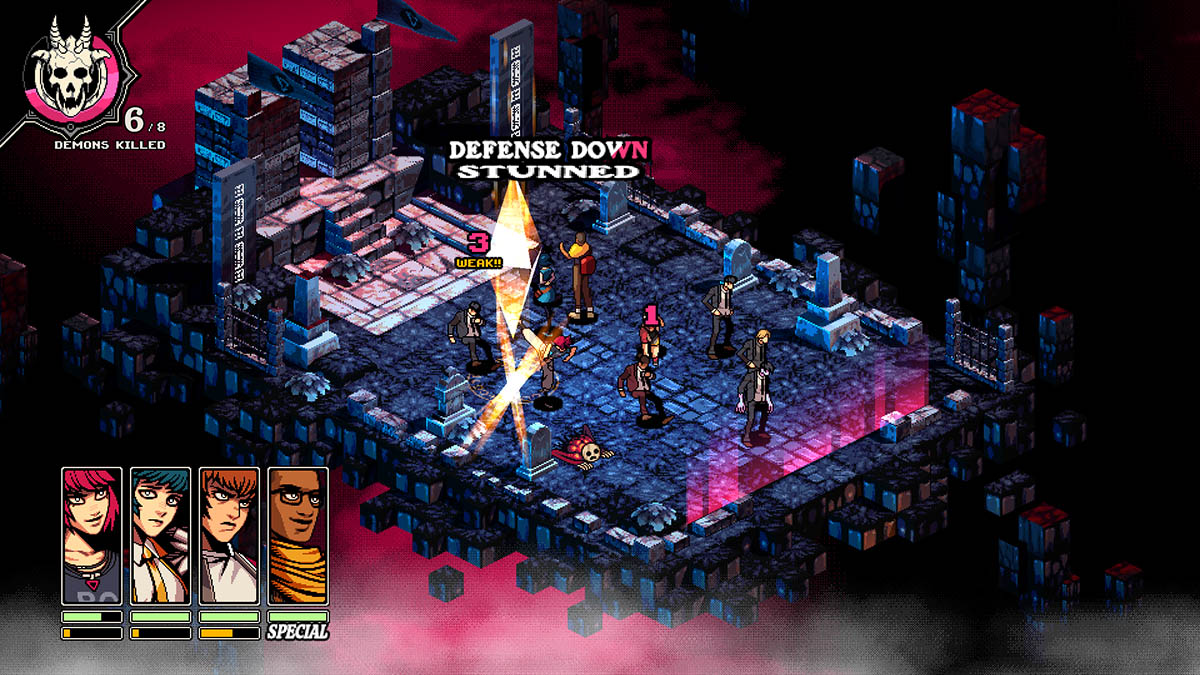 As patient one needs to be in getting to grips with the rules governing its core turn-based combat. How different characters move, how they behave via their class type, how much one can “get away with.” How the battlefield shifts should you engage one enemy and kill them over another. Is it even wise to take on said foe at that time? The benefits of baiting certain enemies into specific squares on the grid, providing short-term success, but what of the long-term? Demonschool is already mechanically an easily-accessible style of tactics. The extent to one’s planning primarily revolving around careful use of one’s action points — that governs character abilities and general movement — as well as how, as noted, two characters can potentially team up and work off each other’s skills. A phase of planning made a touch easier by the simple fact one can undo said plan as many times as one wants before properly committing to that turn. Eventually watching it all unfold in frantic, flashy manner — complete with an occasional cut-in of two characters working in unison by way of a combo move. A reward for positioning an enemy or two between two characters on the battle grid. That very visual premise making encounters feel all that more satisfying to survey in real-time.

Capped off during one’s eventual hands-on time, with a boss battle whose demonic presence manifests as a low-poly 3D form. A stark contrast to your main party’s 2D sprites. Hence, the Octopath comparison of prior; your seemingly inferior sprite-based form going up against foes more detailed, more towering and thus more menacing than any larger HP poole would imply. A gimmick or two thrown in for good measure. And truth be told, for all its visual flair, it takes something engaging on the gameplay front for all that decoration to momentarily be cast aside in place of what is an anxious insistence that you will keep your full party intact. Indeed, Demonschool is no slouch on the difficulty front and while the tools are all there to help you, not for the first time do the margins of success feel so slim that victory conjures just as much a sigh of relief as it does elation on getting through the latest ordeal. 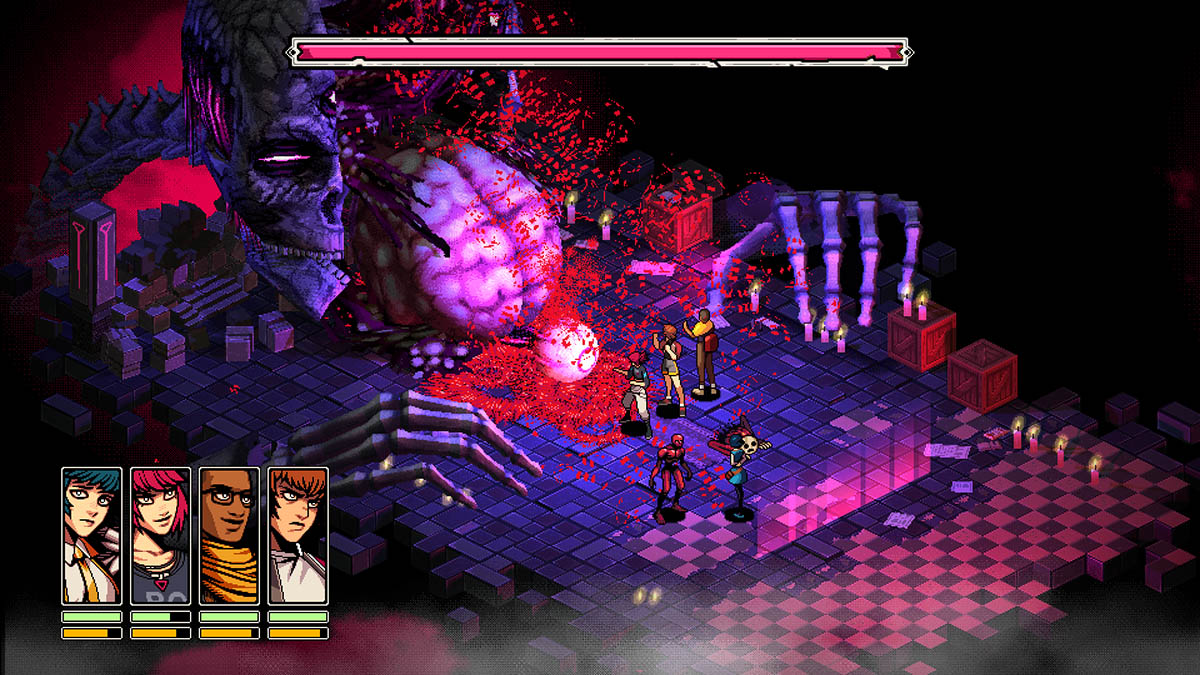 And yet one can not help but insist certain fights keep rolling on. Even as, for example, you reach the minimal number of demons required to be slain and can end said scenario and fulfill the objective. I won’t lie and say the focus on acquiring loot — and the prospect of greater rewards for greater risk — isn’t part of that temptation. Not least because, when asked about the possibility of replaying optional missions so as to go one better on prior results, this seemed to catch Brandon himself off-guard. To the point of acknowledging it may be an aspect of the game that needs a second look. But the other half of that temptation is in how far this grid-based means of tactics goes. Just how complex or emergent can one’s moves and strategies end up becoming. How do later classes — and characters that you can unlock and recruit to join your party — change the layout of this humble grid of tiles? And above all, just how wide a visual palette can Demonschool go in its own rendering of human and inhuman aesthetics clashing on the battlefield? If it could be said Necrosoft Games have the gameplay mechanics, or at least its foundation, nailed down then it’s without question that the visual stylings of Demonschool may make this a truly wonderful tactics RPG to invest in come next year.