If your childhood was anything like the 99% of morally-sane beings, no doubt you’ll have come across — and spent countless joyful days reminiscing over — the climbing frames often a centerpiece in many a child play-park. While I was always more a swing person (helix-shaped, tubular slides coming a close second), the ambitious stride to conquer that mesh of rope or otherwise sturdy apparatus was a simple but effective time-waster for us all. The obstacle course-like structure of certain playground features is one that can find itself in games for it harkens back to those very days of a drive to be successful at what might otherwise be a formidable task. 3D platformers have, for an age, long borrowed from this tireless philosophy — driving one’s self to conquer the challenge before you, regardless of how grueling or impossible it may feel — and it’s arguably one of many reasons why this new wave revival is hitting so many high notes with our generation.

But while most of these current and upcoming titles — from Unbox to Yooka-Laylee to Skylar & Plux — remain steadily focused on that tried-and-tested mechanic of movement, there’s one game that aims to be different yet still strike that same childishly-giddy chord all the same. If you’re like me, you’ll take one look at Snake Pass‘ compacted, overly kid-friendly World of bold colors and bolder geometry and mistake this for some accessible yet candid mobile game of sorts. It’s the mistake I made when I previously ran into a previous build of developer Sumo Digital’s title earlier this year — and surprisingly it’s a comment the developers were emphatic towards and happy to accept — because for all the unintended comedic attire and inoffensive tones, Snake Pass just might herald one of the more inventive platforming mechanics I’ve come across in the past twelve months. 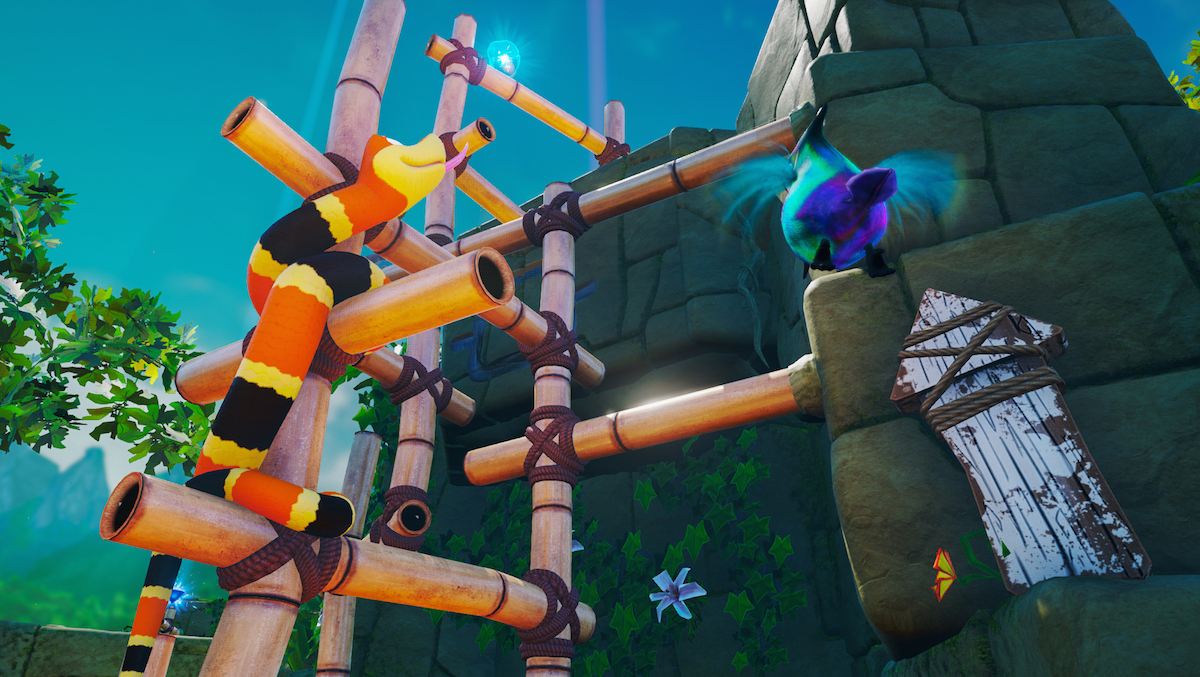 The reason for the initially mistaken identity for a mobile game goes beyond the art-style though — one of the game’s driving concepts is the fact your character, a snake, has little anthropomorphic properties and plays, literally, as you’d expect such a creature to act. The fact that you’re required to move in a zig-zagging wave just to conjure momentum and move, is only just the beginning. As you explore each of the game’s contained environments — collecting glowing talisman and optional tokens on the way — you’ll notice that levels are designed almost like child playgrounds. Both accessible to experiment with but ultimately carrying challenge (and at times risk when one is striding between one platform and another, above an infinite drop below) that ultimately test knowledge of the mechanics on show.

In order to ascend and thus tackle the allotment of bamboo-structured climbing frames, your character must — like a real-life snake — wrap, coil and carefully hang from perilous points in order to reach seemingly unreachable heights. While the game makes careful strides not to shove tutorials in the player’s face, the level showcased in the demo I played recently was designed in such a way to make each challenge feel like a subtle tutorial embedded into the very level design itself. Naturally, as 3D Worlds so often are, you can avoid the blatant paths to certain collectibles and just muck about in the environment and it’s one of the more prominent but beneficial aspects to Snake Pass; the idea that while there is a challenge to accomplish, you’re not exactly being forced or otherwise instructed to focus on it and only it. 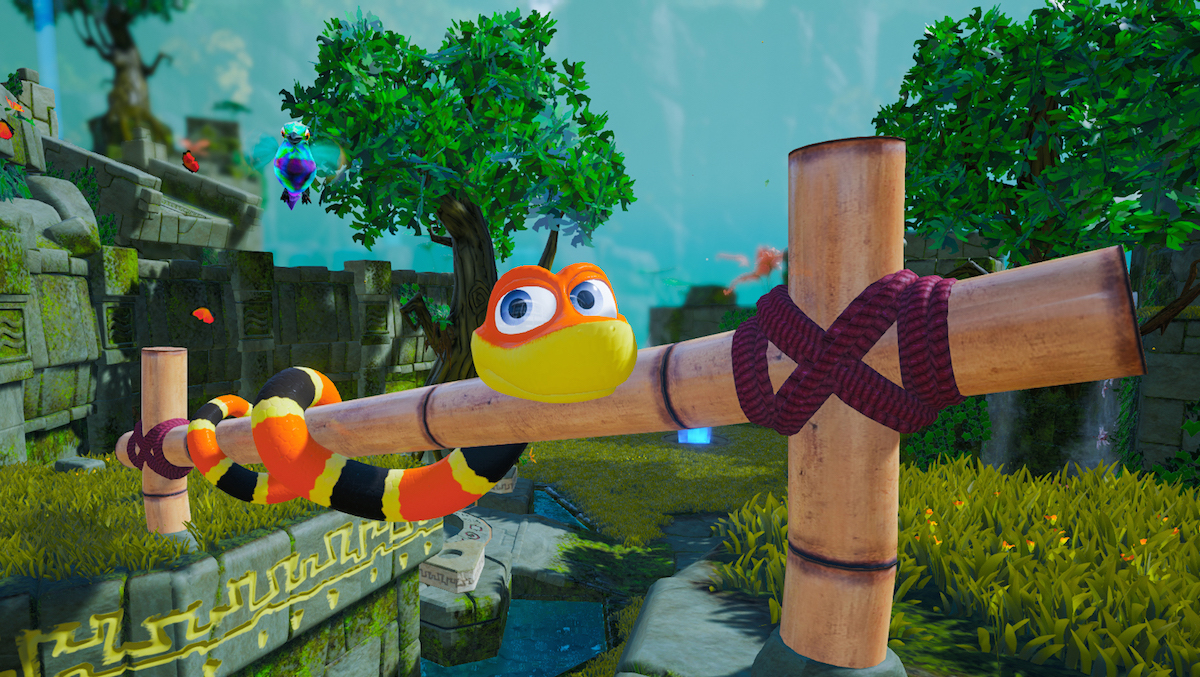 The lofty amount of bamboo frames, intertwining routes and the like make Snake Pass’ environment feel less like linearly-placed levels and more like opportunities to not just master the game’s mechanics, but also just freely enjoy what’s on show. What’s more, something that irks me about games like Super Mario 3D World and their insistency (or perhaps misguided affair) on making levels feel like mere floating platforms in an infinite skybox, is Snake Pass‘ consideration for making its World feel just that, a World. Not some temporary space with a few plots of land thrown in. Sure there are platforms that hang above a deadly drop and yes the edges of these environments present an overlapping skybox, but its the sense of immersion and focus garnered on its very geometry and design of said environments, that reigns supreme.

Especially when one is caught in a precarious moment wherein one wrong or miscalculated move could send you plummeting to your doom; determining when and when not to coil or uncoil, or how much of your body you want to leave in the hands of gravity, creating a kind of tense and silly excitement even the likes of Playtonic have yet to bring to the table…least not yet. So with so much emphasis placed on your very character and little interaction coming by way of dialogue, perhaps it feels a little unnecessary to shoe-horn a side character and/or companion, as if to meet some non-existent 3D platformer quota. Two protagonists taking centre stage? Check. Here though, your little bird friend — aside from springing the inevitable “remind the player of x” lines of speech, feels a little out-of-place for what already feels like a well-established, lone “protagonist” base for control. 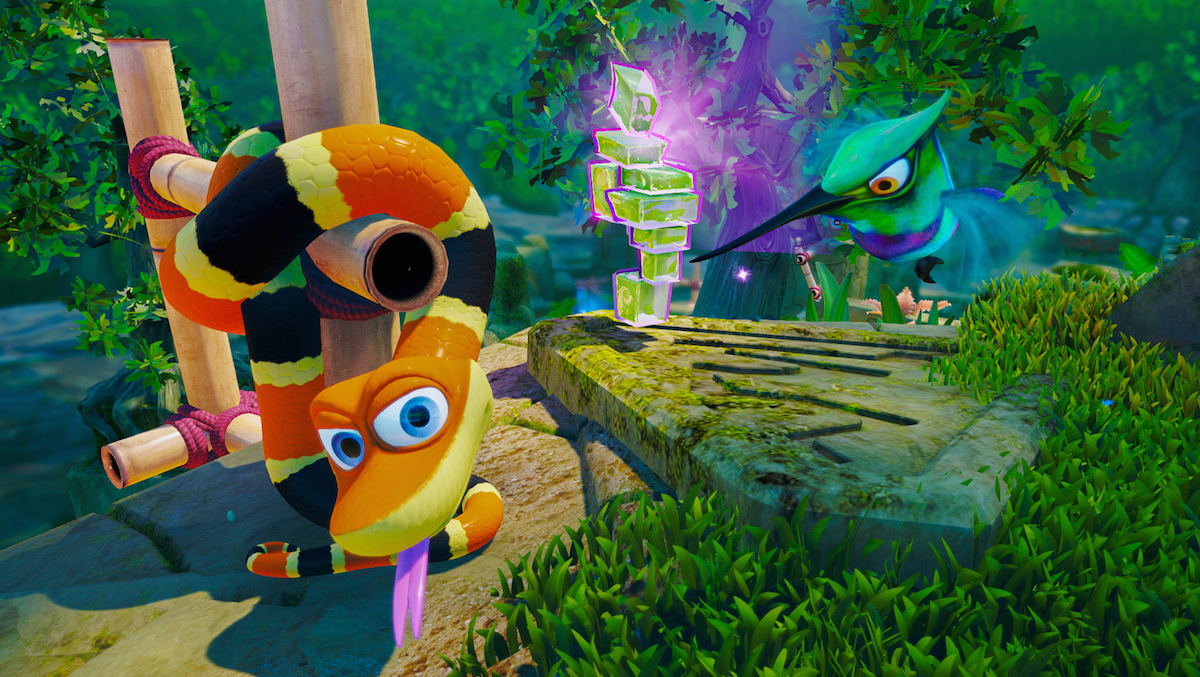 Here’s hoping that Sumo don’t look too much into the (if well-established) history of 3D platformers and take its roster standards of dual-protagonists as necessity, for Snake Pass‘ growing promise lies in how well it lends itself to such simple animated interaction — a snake — and converts that minimalism into a rather enjoyable subversion of platforming archetypes. Shame I’m a grown man now; I fancy a quick rustle of my neighborhood playground’s climbing frame after this.