Like many of you, I first saw Double Fine’s brand new game RAD when it was first revealed a while ago during a Nintendo Direct presentation. As I saw this colorful top-down action game, a roguelike about traversing a hostile wasteland with strange creatures, all while earning unique mutations along the way that grant new abilities, one thought immediately came to mind for me…

Okay, maybe that’s just how my deranged mind thinks after covering so many indie games that I can’t help but notice when two of them are similar (I mean, we also have two upcoming adventure games where you play as a cab driver who solves mysteries). But part of of me still couldn’t help but be reminded of Monothetic’s recent action game. But aside from the fact that I really like Beacon and compare RAD to it in a good way, a quick session with RAD reveals it to easily be its own unique and compelling action game. 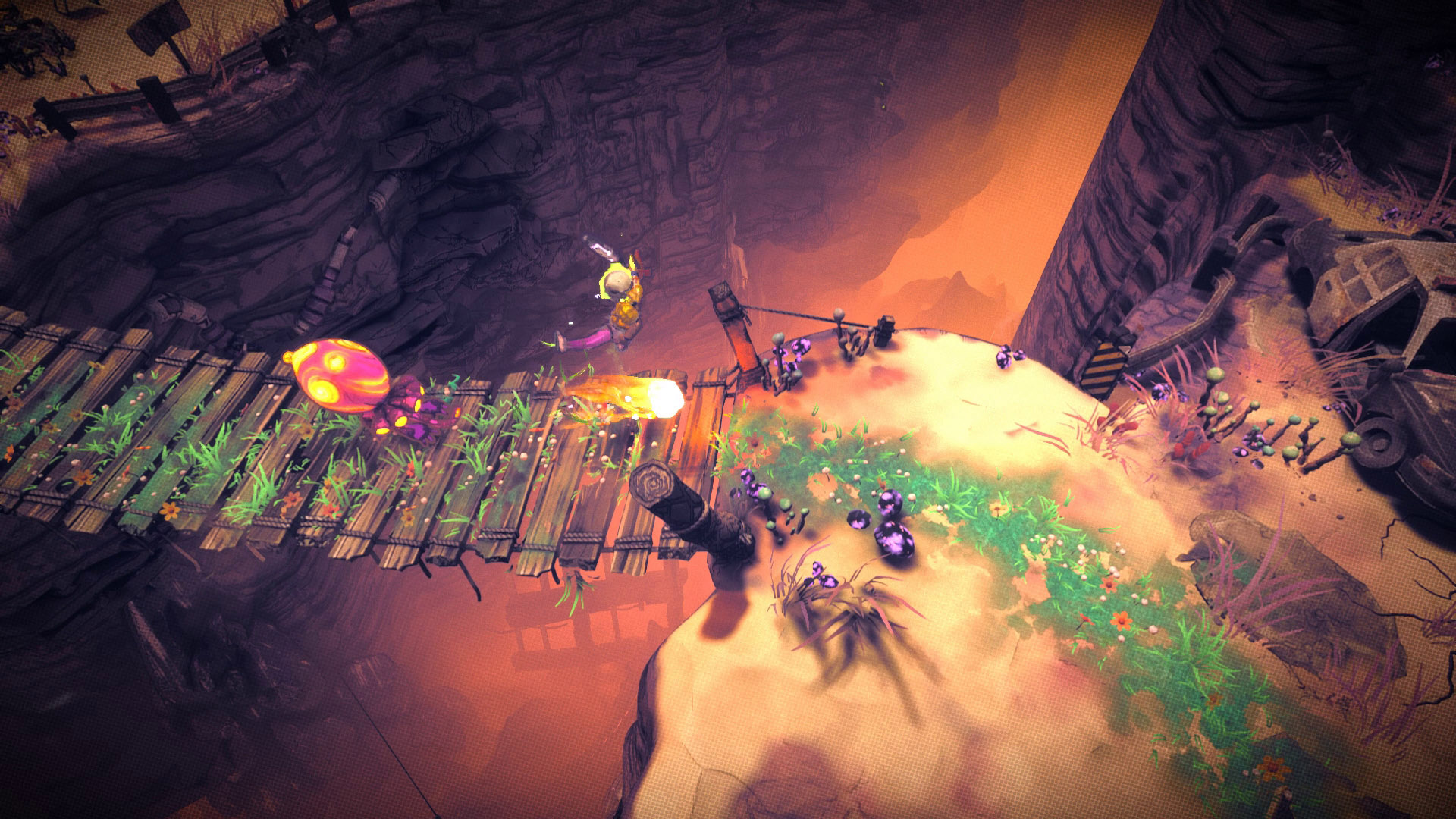 It should come as no surprise that in terms of visuals, RAD is unmistakably an ’80s-themed game. It is, however, a still bit more subtle in is presentation. There’s the Beyond Thunderdome-inspired wasteland, of course. Or what seems to be one inspired by Mad Max films at first, anyway. In reality, Double Fine looked towards the more “surreal” post-apocalyptic films to come out of the nuclear scare of the era, such as Miracle Mile and Cherry 2000. So there’s the classic tint of neon and vibrant colors across the skies and enemies, but they also stand alongside totem-esque structures, warped location and the feelings of long-lost tribes. It’s a familiar yet fresh take on things.

Of course, the fact that your character can collect cassette tapes and floppy disks (acting as currency and keys for various chests, respectively) helps towards establishing a 1980s atmosphere as well. The most impressive touch, though, is that due to your character’s special abilities, they leave behind a trail of vegetation wherever they walk. Aside from acting as a nifty little way to remind you where you’ve been in the current level and providing a speed boost when you walk on it, it also contributes to the game’s lore by being a notable effect of your character’s special powers. 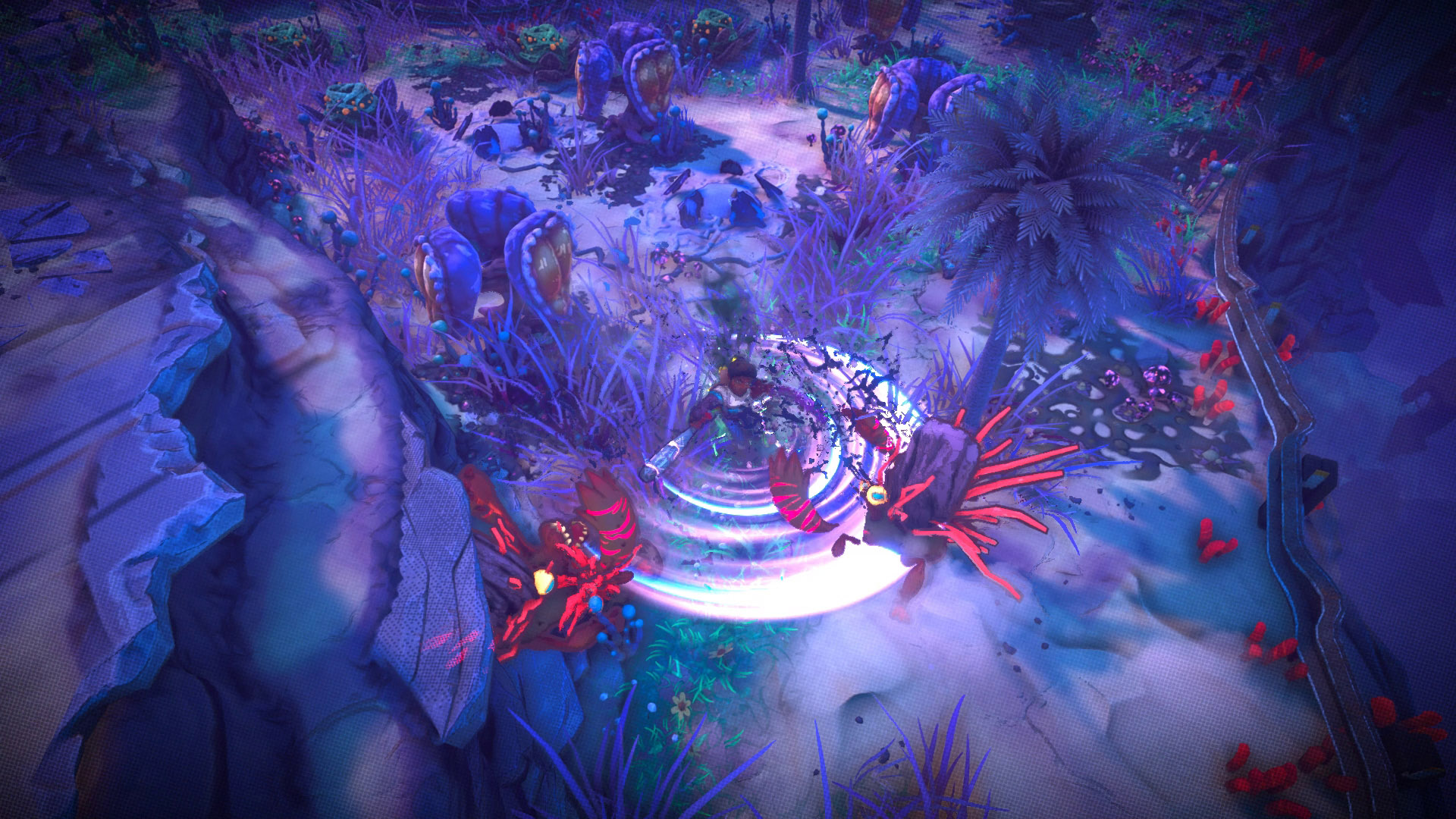 Actually, that reminds me that while I said “post-apocalyptic” earlier, the preferred term for RAD is actually “post-post-apocalyptic.” Earth has actually undergone two massive nuclear disasters here, and out of them, a second civilization formed called the Menders. And far after that, we have our protagonist, who lives in a town currently relying on bio-tech-based Mender technology, even though the Menders have been gone for quite a while. And with the machinery made by the Menders failing, it’s time for you to head out and find solutions, undergoing a ritual that alters your DNA in order to absorb radiation, allow vegetation to grow and undergo mutations. The potential is there for a highly-interesting story involving this universe and the various mysteries with it, so we can’t wait to see more.

RAD’s mutations come into play when you gather enough toxins through defeating enemies. Your current character undergoes a physical transformation, such as wings or a flaming skull, and a random power to go with it. In my case, our character first gained a giant cobra head that allowed for a powerful strike with some range to it. Then after a while, I received a leg mutation that can leave trails of fire to harm enemies. You can have up to three active mutations at a time and there are going to be at least dozens of them, allowing for a good mix of power-up combinations a la The Binding of Isaac. 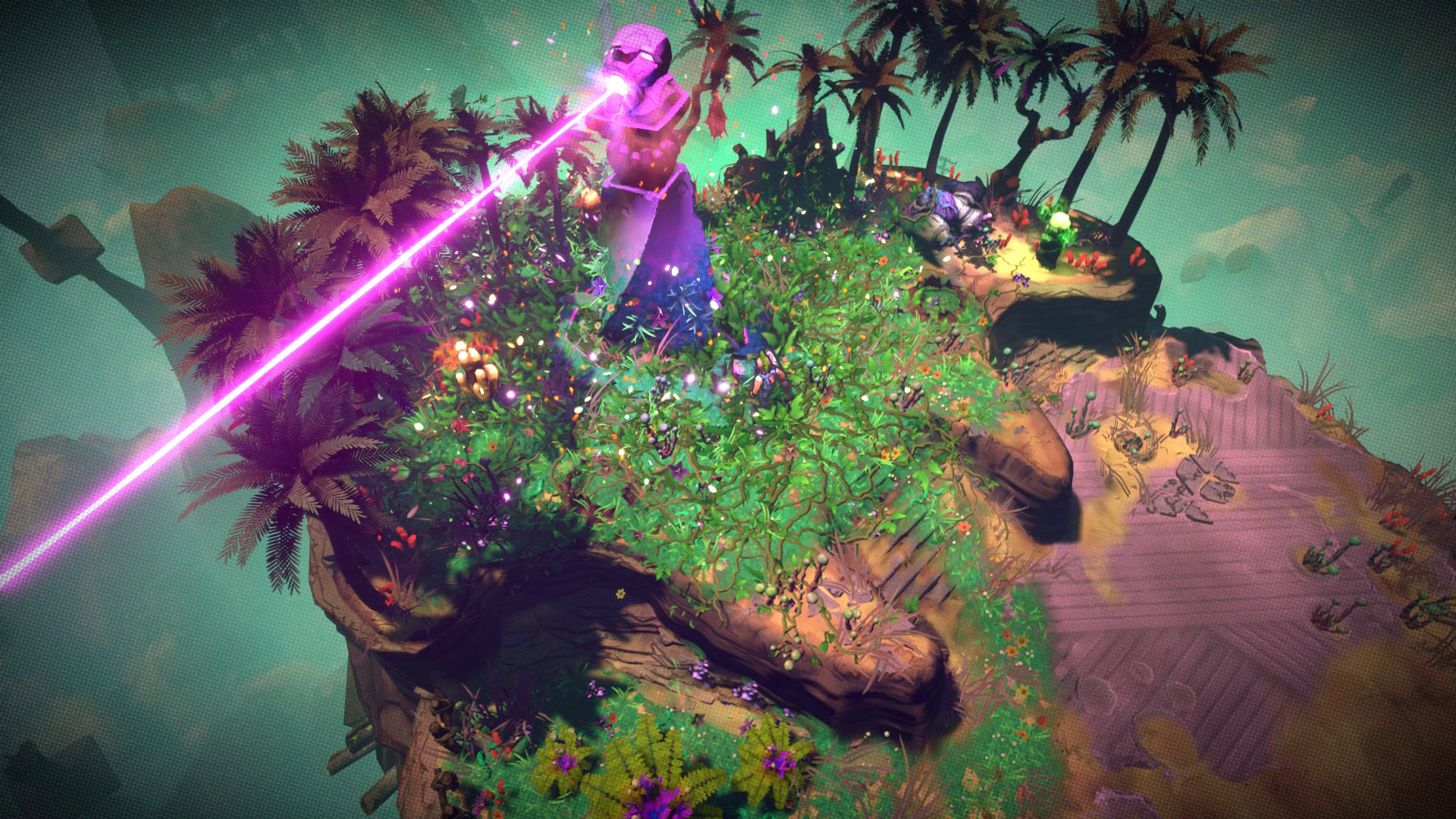 So using these skills, the goal is to make your way through each level, finding and activating certain structures needed in order to open gates and advance. The gameplay and combat is nice and simple with a good level of challenge, nothing ever seems annoying, and it’s easy to find your way around. Combat is easy and fun, especially once you get the aforementioned mutations. The demo closed with a boss encounter, where things notably got trickier as you have to deal with more complex attacks. They got me down to a sliver of health, but I somehow prevailed…and then I immediately died anyway, because it was just a demo for now. Ah well.

The current indie game market is filled with quite a few top-down roguelike and/or action games, and several games with retro throwbacks in one way or another. But thanks to some crisp visuals, an inspired world to play in, a touch of humor and several fun combos of mutations to play with, RAD easily has what it takes to stand out from the crowd and deliver a terrific game. And we’ll see if it does so when RAD arrives this Summer for all major platforms.