There are many things the ground is known for, but being malleable isn’t one of them. Too many ridiculous old adventure comics made quicksand seem like a severe danger but, as it turns out, earth is generally reliable and solid underfoot. The occasional squelchy mud-hole can steal a shoe but that’s the average extent of the difficulty. The floor is not, despite what gaming may have told you, jelly. It’s actually play-dough.

Squish is a small blob created by a soft, rounded world being slowly overtaken by unpleasant things both hard and spiky. The world of Semblance needs someone to do the difficult job of rescuing its essence from the external infection and, rather than wait for a Fated One to save the day, creates a hero from a small piece of itself. Squish, like the world, is rounded and blobby, but it can move, jump, and deform the land with a dash in order to create a path towards the energy balls hovering just out of reach. The controls are simple but there are a good number of ways to use them to solve each puzzle. 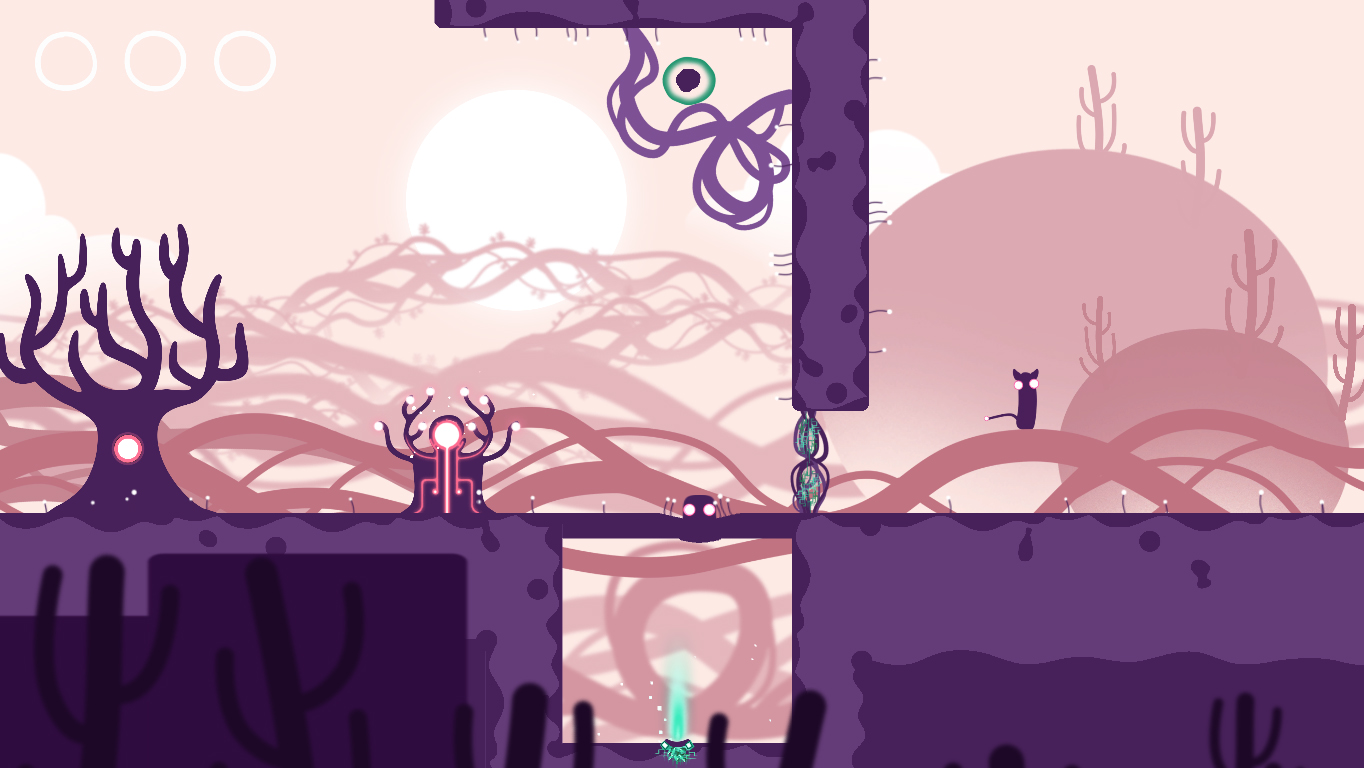 A simple level right at the start has an energy blob hovering too high in the air to grab. Jumping onto the platform and then again straight up doesn’t cut it, and even a dash into the air at the jump’s apex still comes up short. Much like most of the world, though, the platform is malleable. Walk (or roll, or however blobs move) underneath the platform and dash straight up to raise it a little, or bash it several times in a row until it looks like an upside-down U. The platform reacts to where you bash it, so if you’re off-center then one side will remain at the starting level while the other raises, up to a point. The world is squishy but not infinitely so, and the trick is to beat it into the most useful shape. A few hits on the platform, though, and it’s now tall enough to do a jump-dash from in order to grab the energy blob, and then it’s on to the next area where the world deformation starts getting a proper workout.

Blobs and spikes don’t get along well. Have a collectible hiding in an alcove guarded by twisty dense thorns? Pound the ground and create a passage underneath. An entire long platform covered in thorns can be subverted by pounding it up from underneath, because the infestation is hard and rigid unlike the world it’s invading, and doesn’t stretch when the ground does. These are the basics, though, and it doesn’t take more than a few screens before the modifiers start showing up. Lasers, beams that solidify a platform so it can’t be warped, hard rock that changes Squish’s shape when he(?) slams into it, and even walls that indent to create new platforms all show up to make getting that energy blob just a little bit trickier. 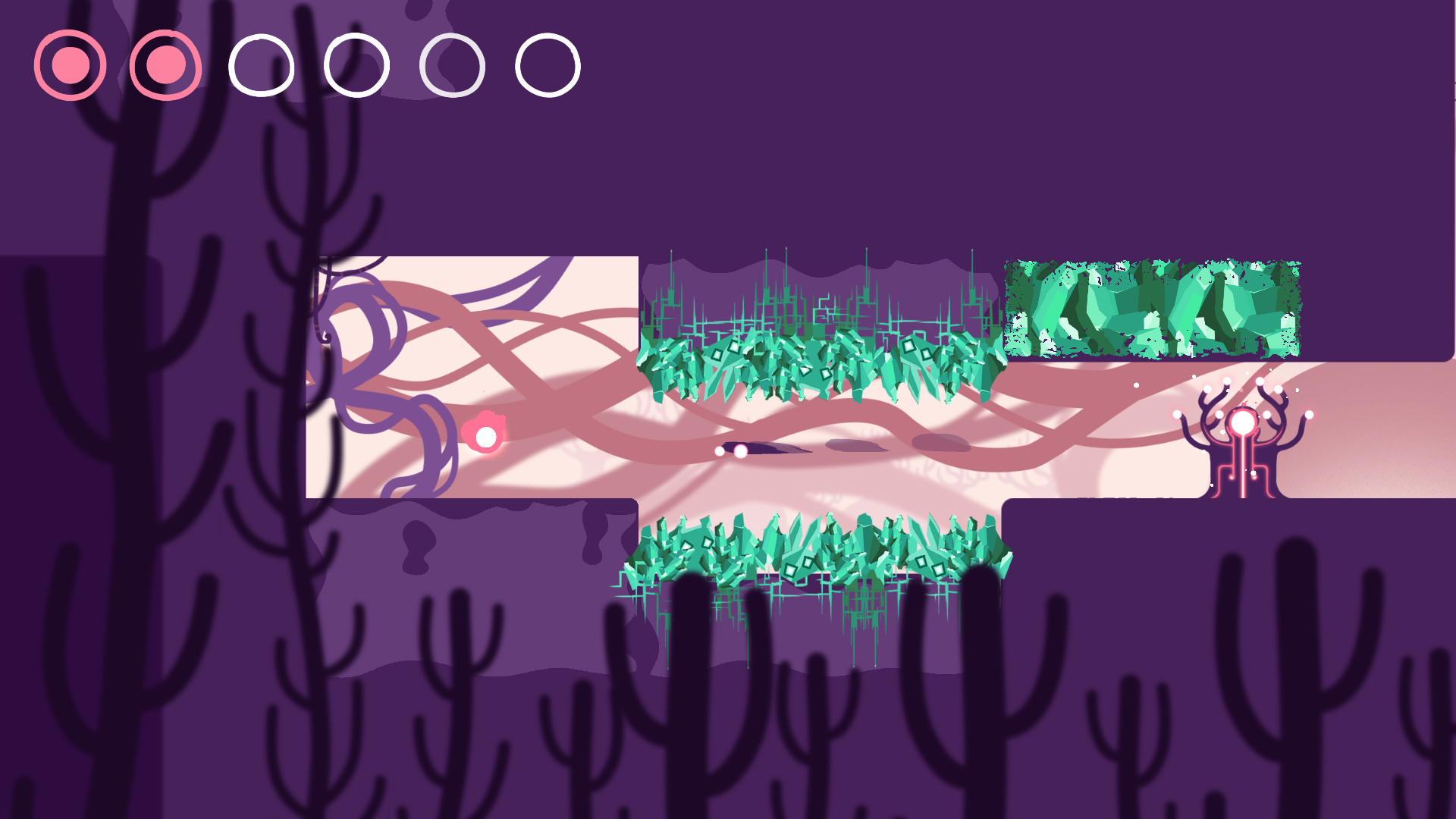 The puzzles and the world containing them are tied together with an art style that looks like a particularly memorable children’s book, all soft colors with flourishes of intricacy. Purples are rounded and smooth, while green is chaotic and jaggy.  Black shapes are silhouettes in the foreground and the background is a number of shades of pastel pink. It’s easy to get focused on the next jumping puzzle, but when taking a moment to enjoy the art it’s hard to resist the feeling that Semblance is best played lying on the floor while turning pages twice as big as your head to get to the next screen. The primary difference being that a children’s book won’t kill you half a dozen times as you experiment towards a solution.

Semblance is still a good way off but its demo showed a lot of clever use of its central mechanic.  While some puzzles had a lot of wiggle-room, letting you bump little hills into the platforms any way you’d like, others required more precise solutions and jumping skills.  Slamming down onto a platform a few times in a row until the dip encountered a beam that quickly made it resume the original shape, sending Squish high into the air as a side-effect, or bumping a platform beside another beam so it moves from being straight up to sitting at an angle, or just using the dash move with the right timing to avoid flying into a wall of spikes, Semblance uses its mechanics for both puzzle-solving and action platforming.  The demo ended just as the puzzles were getting nicely tricky, and the promise of bigger and more complicated areas that keep adding more twists to Semblance‘s deformable world put it right at the top of the Anticipated list.