The thing about being under an AI’s control is it doesn’t matter how cute, charming or amusing they are; it’s still being a test subject for a being that considers itself superior.  At least Shodan has the courtesy to be outright homicidal, rather than Portal’s Glados or Cheap Golf’s Susan (every bit as memorable as her more well-known counterparts) using the player for their own ends.  The AI in Lab Rat, S.A.R.A., is as quirky and bizarrely likeable as any of its supercomputer-powered counterparts but at least it’s a little more direct about how it views its subjects.  While you may just be a data-generating test subject it involves a stream of block puzzles that are irresistible, which somehow makes the situation better.  Sure, a giant mechanical hand drops down to grab you like an errant rodent after each test, but those blocks aren’t going to line themselves up.

The goal in each room is to put a block in its goal, and unlike the standard Sokoban-style puzzles, you can pull and strafe the block instead of simply pushing it. This means that corners are no longer the death-traps they’d be in a more traditional block-pushing game, and not only that you can climb on top and jump off the side to approach the block from a different angle.  In theory this should make it easier, but the result is puzzles that take this mobility into account, requiring a fair amount of mental dexterity to see a path through tight quarters. 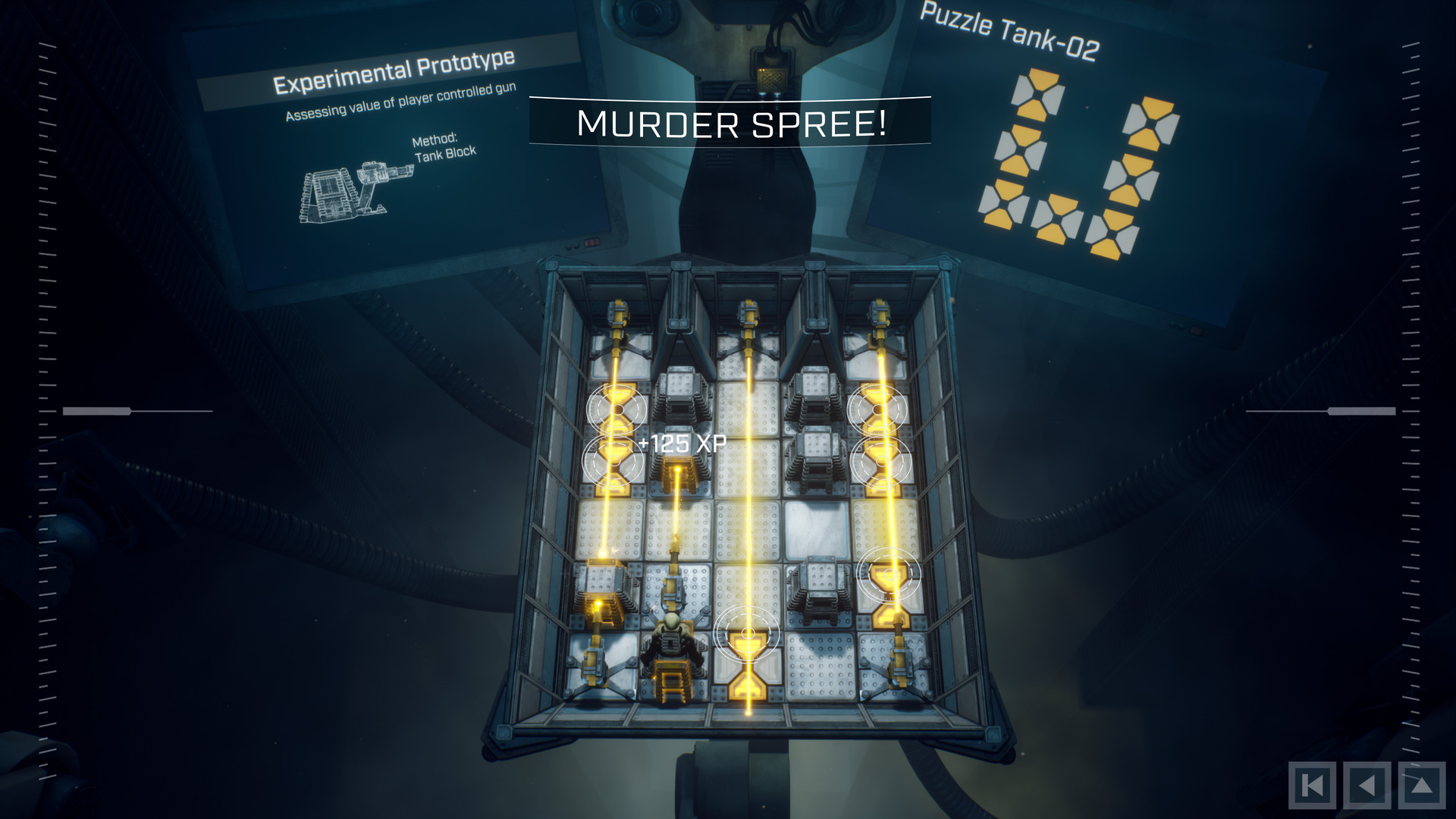 This only gets more complicated when beams are taken into account.  In the Lab Rat demo there was only the yellow electric beam, but other colors are coming along as well to complicate the path to the goal.  Pushing a block through the beam changes the color of the side it hits, which is great if the puzzle goal requires that side to be yellow and not so useful otherwise.  Not only that but touching the colored side only works if you’ve also walked through the beam and turned its color, and otherwise gives an electric zap.  The player character changes from a neutral color when going through, at which point they can now only touch the same-colored side of the block.  This can require creative thinking, with the most basic being figuring out how to push a block through a beam without changing color yourself.  In a room with a yellow beam shooting up from the bottom, for example, you could grab the top side of the block and strafe it across, using it as a shield.  Alternately, if there isn’t room, you could also push it into the beam, climb on top and down the other side, then pull.

And then new rules come into account, such as figuring out how to move the lasers.  You can’t directly touch them but the block is a large chunk of metal and doesn’t care what it’s pushed up against.  A little trial and error, aided by a handy Back button, or when things get really broken, a near-instant Restart, and Lab Rat‘s rooms slowly start revealing the possibilities.  This comes in handy in the bonus rooms, which throw new twists like setting you at the controls of your own laser, or providing “helpful” simulated multiplayer bots that excel in being in the way. 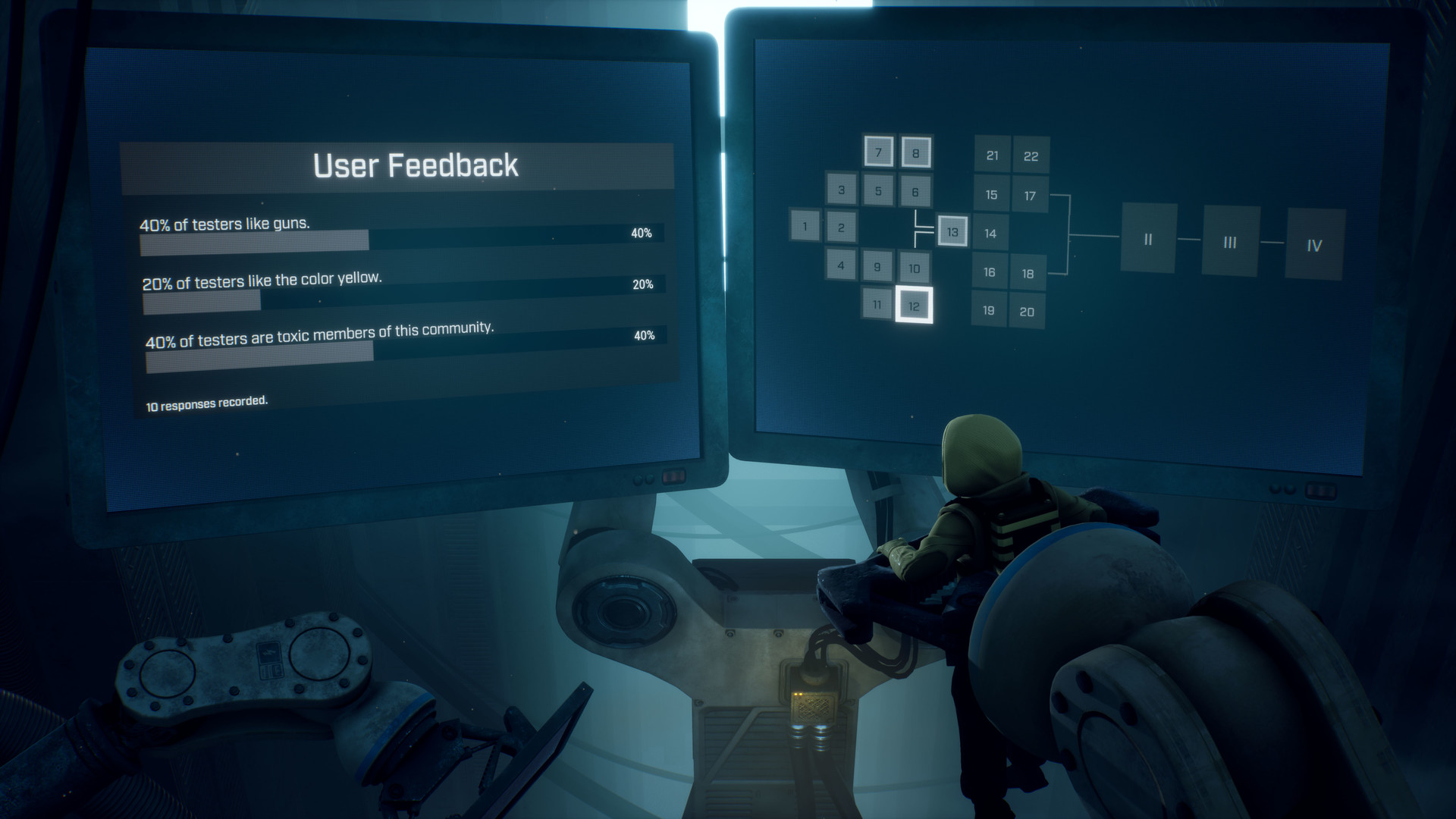 All this puzzle-solving is there to help S.A.R.A. study humans, and after each solution it asks a multiple choice question to gather data on the strange little beastie it’s got trapped in its grip.  The problem is that, due to not understanding people, it doesn’t know quite what to ask, leading to all sorts of questionable and highly-entertaining player analytics.  It’s hard to build a personality profile when the only thing the tester knows is that you’re pushing blocks around lasers, after all, but seeing as data never lies it has to be correct.  Meanwhile Lab Rat is collecting all the answers, so when you put in your response you get to see what percentage of everyone else agreed with you or chose differently.

The Lab Rat demo only had twelve main puzzles plus two bonus sections of three puzzles apiece, and that’s plenty to get a taste of the trickiness to come.  Block-pushing may be one of the most basic types of video game puzzles, but it works every time, and Lab Rat adds enough wrinkles to the genre that it stands out even before taking its setting into account.  It’s amazing how much more tolerable being a test subject is when the tester is so politely weird, so while the conclusions S.A.R.A draws from trapping you in her maze may not be particularly useful, it will still be fun to see where it all ends up.