It’s always hard to start a new life in a new land, but generally there’s at least an existing civilization to work from.  Buy a house, find a job, get to work building a social life, and soon enough if the area doesn’t suck too badly everything starts coming together.  And then there’s the survival genre, which dispenses with that whole “civilization” thing and tosses you into the wild with little more than the clothes on your back and the ability to turn raw materials into functioning tools with a single click.  Timber, stone, ore and other more esoteric resources combine to build a new world out of the wilderness, but some materials take more effort to acquire than others.  Len’s Island is a survival game that follows all the usual conventions except it’s also got a bit of proper dungeon-crawling in its makeup, and there’s always a choice as to whether to spend a nice day in the sun gathering up the island’s bounty or to head into the darkness and take on the creatures down below and see what secrets may be hiding in the caves.

Like most survival games, Len’s Island starts you out with very little, but at least you won’t need to be punching trees.  Len (who comes in both male and female versions) starts off with the basics- axe, mattock and knife.  On top of that, there’s little in the way of inventory management, which is such a standard function of the survival genre that it’s hard to realize how good it feels not to deal with until it’s gone.  Len starts on the beach near a raft with a bedroll and chest, and that’s all that’s necessary to begin the adventure. 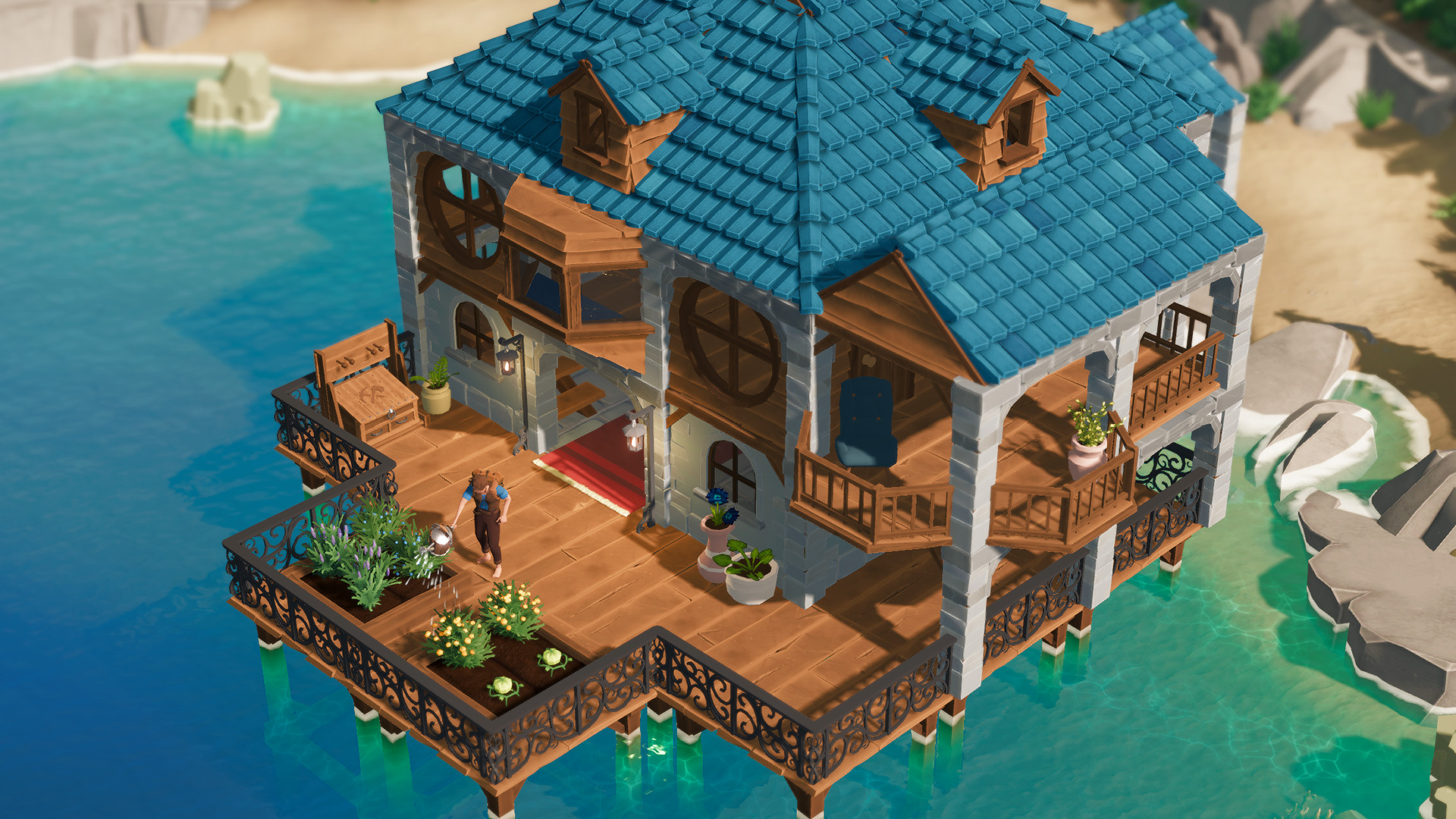 The island is a peaceful place, not a monster or animal to be found, covered with trees, bushes and rocks.  A rundown shack a short stroll from the raft needs a bit of work to become a home base, and this acts as the introduction to the modular building system.  Like Valheim, houses are built from parts, and it doesn’t matter too much how you combine them because the only one who needs to be happy with your home base is you.  Unlike Valheim the view is from an isometric overhead perspective, with no ability to rotate the camera except in Edit mode, but walls and floors politely turn transparent when Len is behind them.  It’s a nicely effective system that lets you snap together parts and quickly lay down furniture, provided you’ve got the resources available.

While the main island isn’t particularly large it does take exploring to learn the layout.  Broken bridges lead to new areas and smaller sub-islands, some with extra secrets and others less immediately useful.  The large stone bridge leads into a town, though, and this is where the first hints at the size of the quest ahead show up.  Different shops sell everything from seeds to raw materials, plus special weapons that, as eventually becomes clear, you won’t be able to craft.  The economy is set up so that you can’t just trade things all day, with shopkeepers paying less to buy items than they’d sell them for, but then again you’ve got an unlimited supply of raw material waiting back on the island.  It also doesn’t hurt that gold isn’t often important, only being necessary when it’s time to buy a new backpack to hold more stuff. 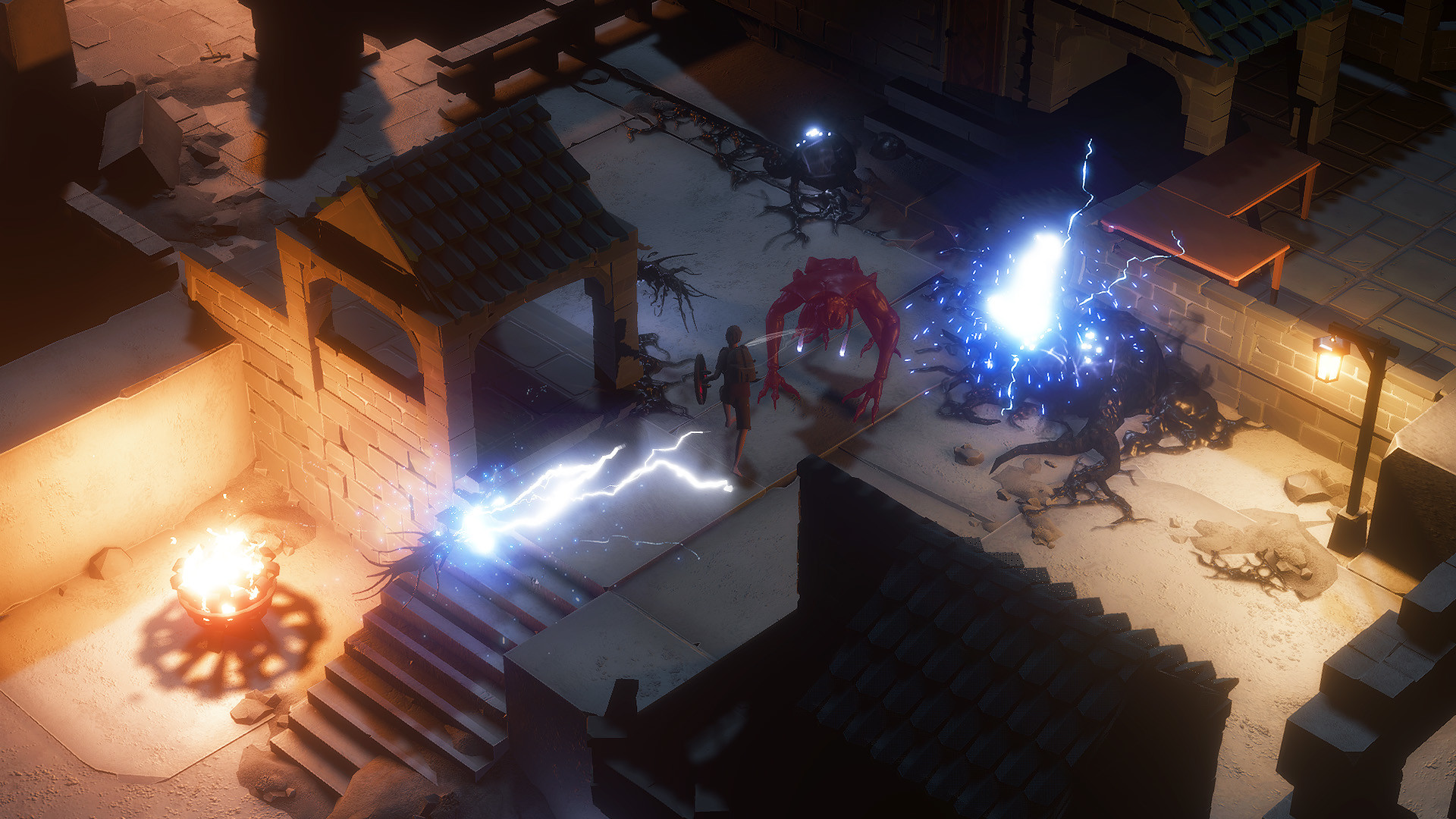 While Len’s Island dispenses with the standard inventory system there are still limits.  The backpack can hold a set amount of each material, initially 150 units maximum, while tools take up space on the toolbar.  Progress is actually gated by the inventory, with new, larger backpacks costing a fair amount of gold, and you can’t build a better weapon without a higher level crafting bench and that requires more than the initial backpack can hold.  It’s possible to scavenge and farm your way towards the necessary cash, of course, but that would get tedious for anyone but the most patient survivalist.  It’s much better to grab a weapon and head into the dungeon underneath the peaceful island surface.

The dungeon is where almost all the dangerous things live, and thankfully they seem happy to stay where they are.  It’s also where you can get coal, iron and even lightstone, not to mention the dark essence dropped by defeated monsters.  While there are only a couple of monster types in the game, so far they look good and pack a punch, so aren’t to be taken lightly at the beginning until you get decent weapons to take them on with.  Combat is basic, and will probably feel somewhat nicer once proper controller support is added, but does have options to keep you paying attention.  Each action, whether it be the swing of an axe into a tree or stabbing a spear into a creature’s side, has a timing feature available to make the next swing a critical hit.  At the end of the swing a halo appears around the weapon, letting you know it’s time to hit the attack button again, and while tools have a simple rhythm the weapons tend to get a more complicated flow of strikes.  Additionally there’s a dodge roll to get out of danger, and it works mid-air as well for clearing longer jumps.  The dungeon is hand-built rather than randomized and it’s always fun to find a shortcut or hidden area that requires full use of the jumping mechanics to access. 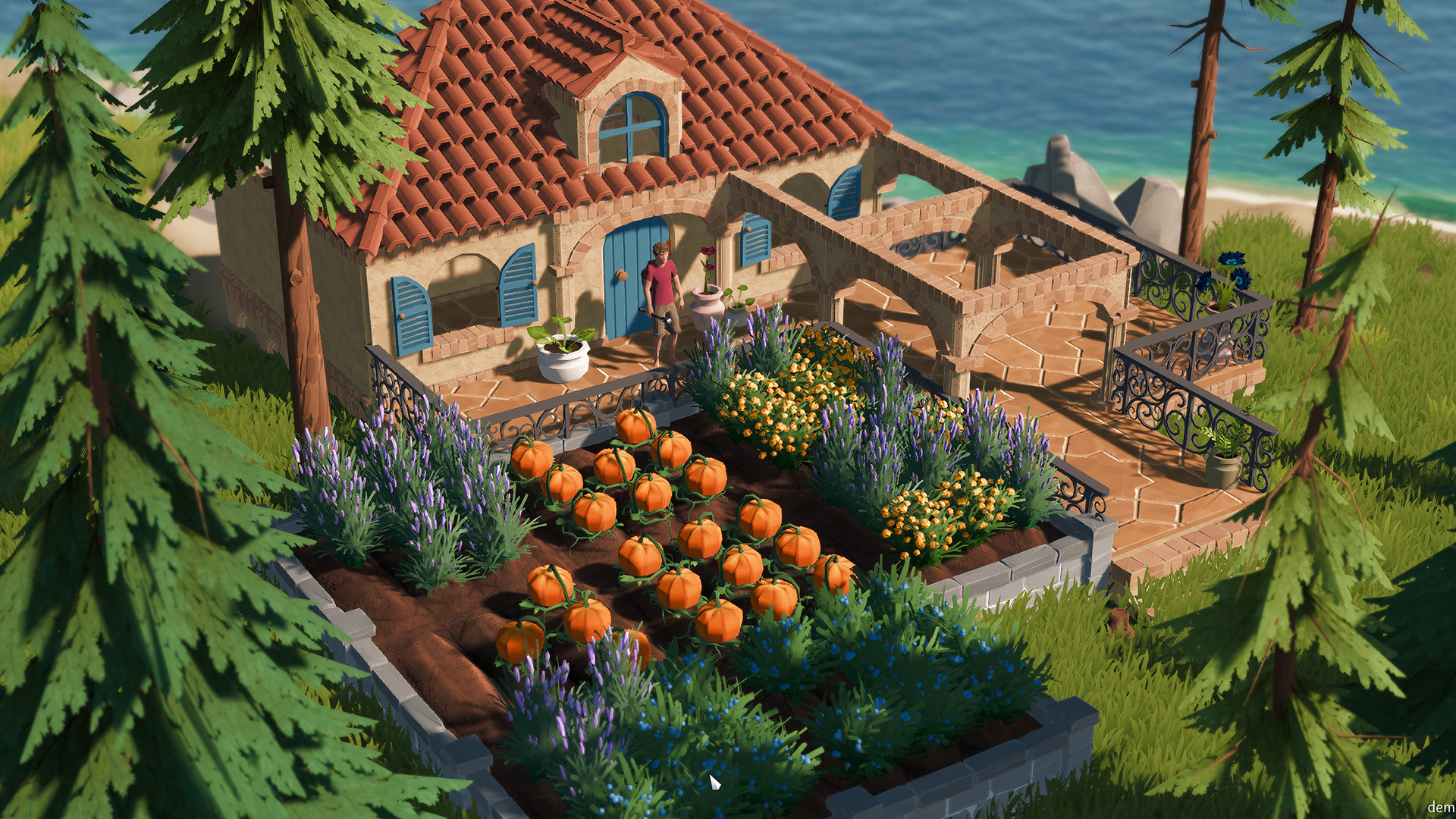 There’s a pleasant rhythm to Len’s Island‘s gameplay, helped in no small part by the dungeon-running being an option rather than a requirement.  Want to spend the day whacking down trees to build new boxes to expand the garden?  Not a problem.  House design feels old?  Yank out the walls and build new ones, switching to stone or terra cotta materials while adding arches and a new balcony or two.  Need iron but don’t feel like arguing with big ugly beasties?  The cave has a peaceful starting area and you can always throw rock into the refinery to get a significantly lesser amount of iron back.  Len’s Island is a small world that slowly opens up as you craft, fight and explore your way towards the more powerful tools, but there’s always time to just kick back and enjoy being there.