2021 was a big year for Final Fantasy if not an unconventional one. The first six Final Fantasy games were given a retro remaster, but despite originally being Nintendo games, only appear on PC and mobile devices (and at this time only four have been released), the multi-part Final Fantasy VII Remake received additional content and Final Fantasy VII: The First Soldier will be coming to mobile devices. The biggest surprise was the announcement of Stranger of Paradise: Final Fantasy Origin which is a soulsborne style game set in the world of the original Final Fantasy.

Stranger of Paradise: Final Fantasy Origin stumbled out of the gate with its original trailers where the excessive use of Chaos was memed to death following its announcement. But in spite of this, Team Ninja is no slouch when it comes to making this type of game as they have proved with Nioh, and while there’s some inconsistency among the quality of Final Fantasy. games few of them are terrible so sleeping on this one would be ill advised. Despite rarely taking my own advice, the demo was played and the resulting feelings are rather mixed.

The premise of Stranger of Paradise is not to be a remake of Final Fantasy, but a new story that is heavily inspired by it. If it’s a reboot or reimagining isn’t entirely certain. Jack and his friends mysteriously appeared in the Final Fantasy world. As we all know, Jack is consumed by his need to destroy Chaos. Are they the legendary Warriors of Light? That seems like a good guess, but revealing the answers to such questions in a short demo seems like it could potentially spoil the game when it finally comes out. It’s a darker and more mature version of the world that was introduced in 1987. Even the crystals that were white in the original game are now dark, and while basic game mechanics may have to do with this, there was virtually no visible violence in the turn-based battles of Final Fantasy compared to the visceral combat that’s in Stranger of Paradise. 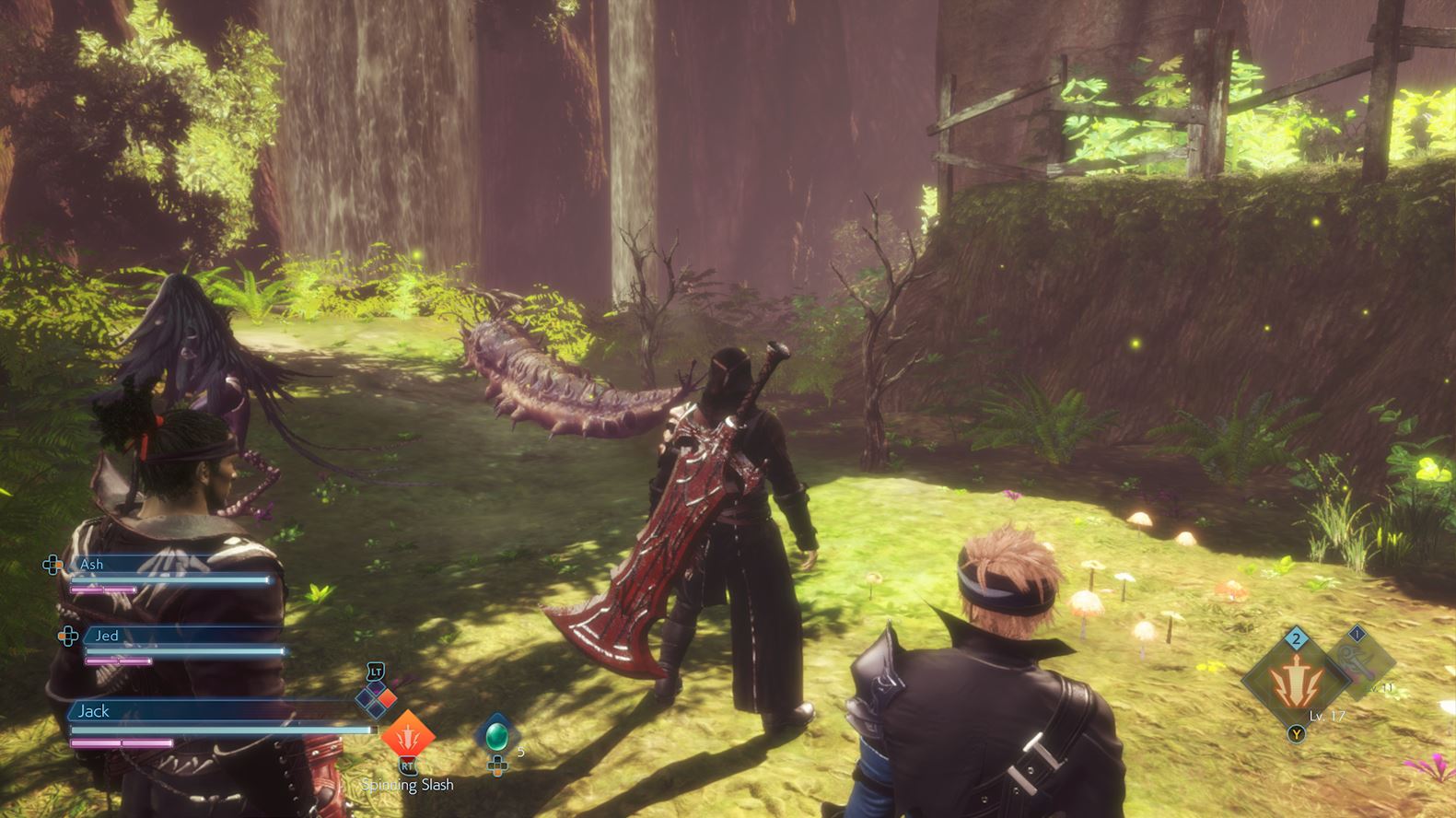 From the start it looks like the artistic direction draws more inspiration from Final Fantasy VII Remake than Final Fantasy, which is a shame because seeing a world and characters based after Amano’s original sketches and designs with current-generation graphics would have been amazing. Main protagonist Jack Garland, which is a name that’s suspected to be foreshadowing with the subtlety of howitzer, bares some similarities to Cloud. Unlike Cloud he has a physique that looks like he can wield a buster sword, but like Cloud he has the blond hair, grey T-shirt and BDU pants. Oh, he also has his own variation of a buster sword. This appearance can change based on his selected job and equipment, but it still creates a greater visual parallel to Square Enix’s current and perpetually in development action RPG than the game from which this is based.

In their default outfits the three base party members, Jack, Jed and Ash, look more like they raided the closet of a ’90s boyband than the legendary warriors of light. They also talk as though they were trying to emulate the style of the Teenage Mutant Ninja Turtles. There are a few other moments that break the immersion and feel disconnected from the world of Final Fantasy, such as Jack getting a call on his cellphone with a Limp Bizkit ringtone of all things. Nu metal and cellphones were two things that didn’t seem to exist in Final Fantasy when the Warriors of Light were trying to restore the elemental crystals, but none of these stylistic directions should be surprising since I always thought Final Fantasy XV was the result of someone seeing the video for Bat Country and deciding to use that as a premise for the game (contrary to what that statement may imply, I like Final Fantasy XV). 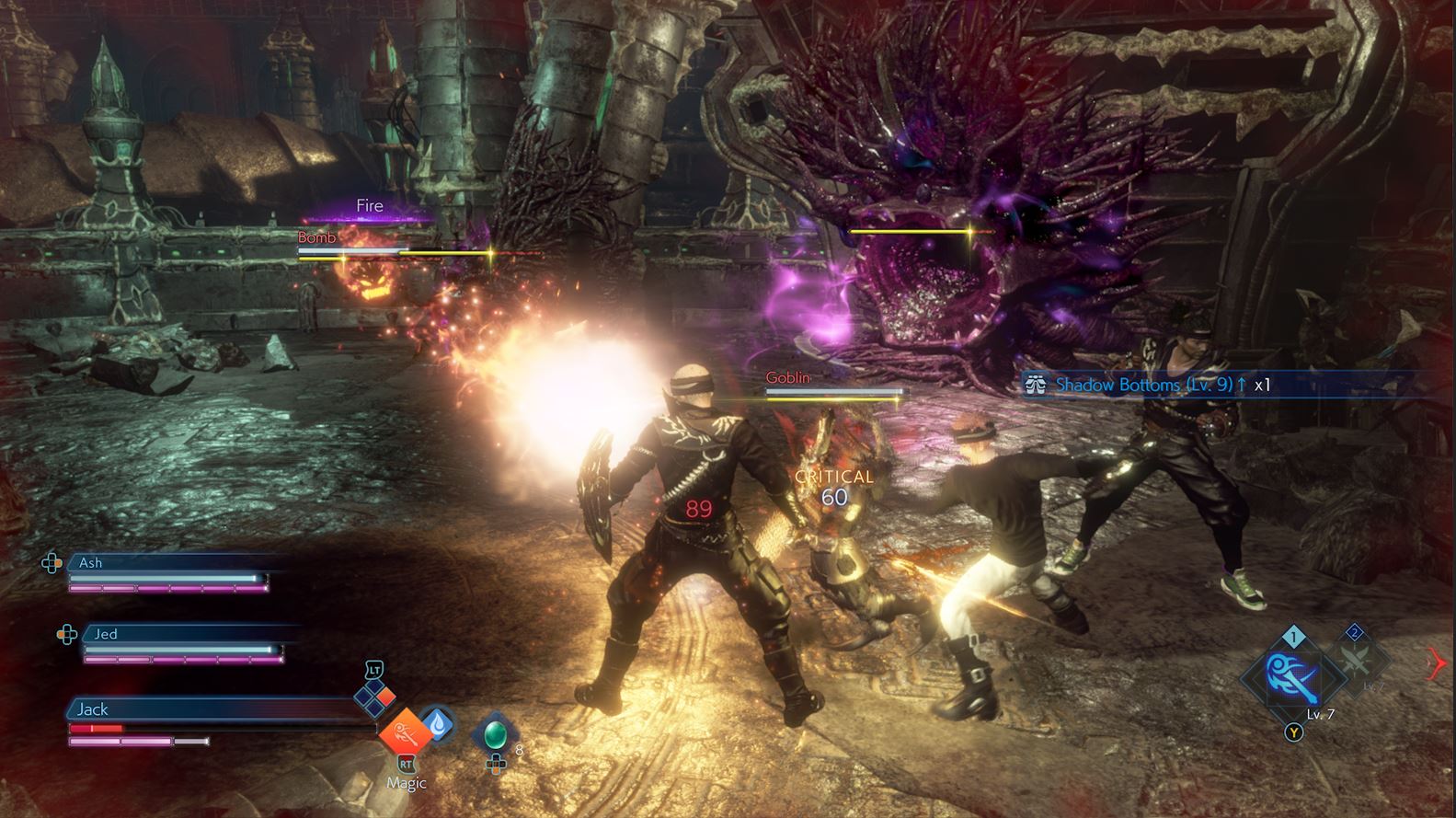 After reading those prior paragraphs one may expect that Stranger of Paradise is about to get ripped to shreds like anyone who tries to play it on the hard difficulty, but that would be incorrect. While some previously-discussed design choices may be subjectively good or bad based on personal preferences, it’s much more difficult to deny that Team Ninja has once again worked their magic. Like Nioh, the challenge is high but not insurmountable. Combat demands quick reflexes and know how to think on one’s feet with marginal room for error between checkpoints. One can always run back to the checkpoint to replenish their health, but that means all the area monsters respawn. But challenging or not, the game mechanics result in satisfying battle experiences. You feel the weight of the weapons as you try to dispatch all the enemies so you can move to the next area. One good decision Team Ninja made was having three different difficulty levels with an optional casual mode to make the game more accessible to people who don’t have the time or patience to get good. And for everyone who says an easy mode takes away the point of soulsborne games, there’s a harder difficulty level than the already difficult standard difficulty, so you all can play it on that level for the greater challenge.

Like the original, Stranger of Paradise has a job system. In the demo Jed and Ash are limited in what jobs they can equip, but Jack has more options. He starts out as a Swordsman, but as part of the many tutorials needs to switch to Mage to clear an obstacle. More jobs, such as the Lancer, unlock as he finds new equipment. Different jobs may be better depending on playstyle or circumstances. Jack can have two jobs equipped at a time that can be switched on the fly with Triangle or Y. 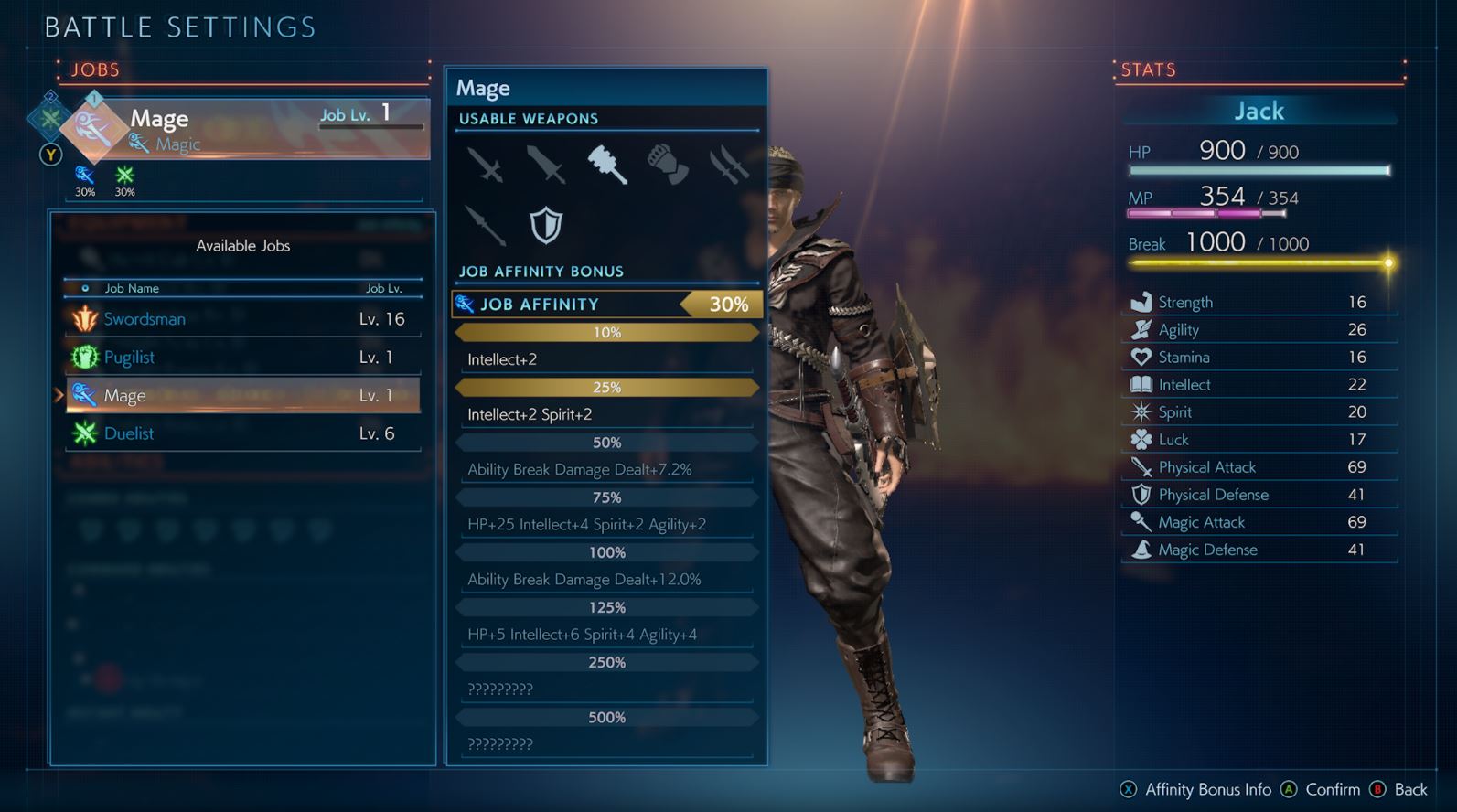 Stranger of Paradise: Final Fantasy Origin may be criticized for the design choices mentioned above, but it does excel in its battle mechanics. The thought of rebooting the original Final Fantasy as a soulsborne is one that’s understandable to be met with trepidation, but after playing the demo this title has gone from something that sparks to curiosity to an anticipated game. Fighting my through paradise is challenging, but like a well-done soulsborne game the challenge leads to the feeling of accomplishment. Getting from checkpoint to checkpoint isn’t always easy but every time death occurred the reaction wasn’t frustration but the feeling to try again. Following the action in the boss battle with Advent of Chaos can get a bit Michael Bay-esque at times, but victory was achieved. This is simply a game that’s as fun as it is difficult. The different difficulty levels add to the accessibility, as Final Fantasy games don’t have the Dark Souls level of difficulty so excessive challenge could be off putting to those who aren’t fans of both types of games.

Earlier the character design choices were criticized but the same cannot said for the environments. Seeing the Temple of the Dead as a re-imagined version of what is presumed to be the Temple Fiends was an impressive sight. Seeing locations from Final Fantasy reimagined as more realistic 3D environments is one of the more intriguing aspects of this title, and after what the demo showcases there’s only more curiosity for how the other environments look. The music referenced the Temple’s theme from Final Fantasy in a more somber remix and nods to the source material are always appreciated. There were a few other references to other games to be found like a cactaur hiding in the Temple. 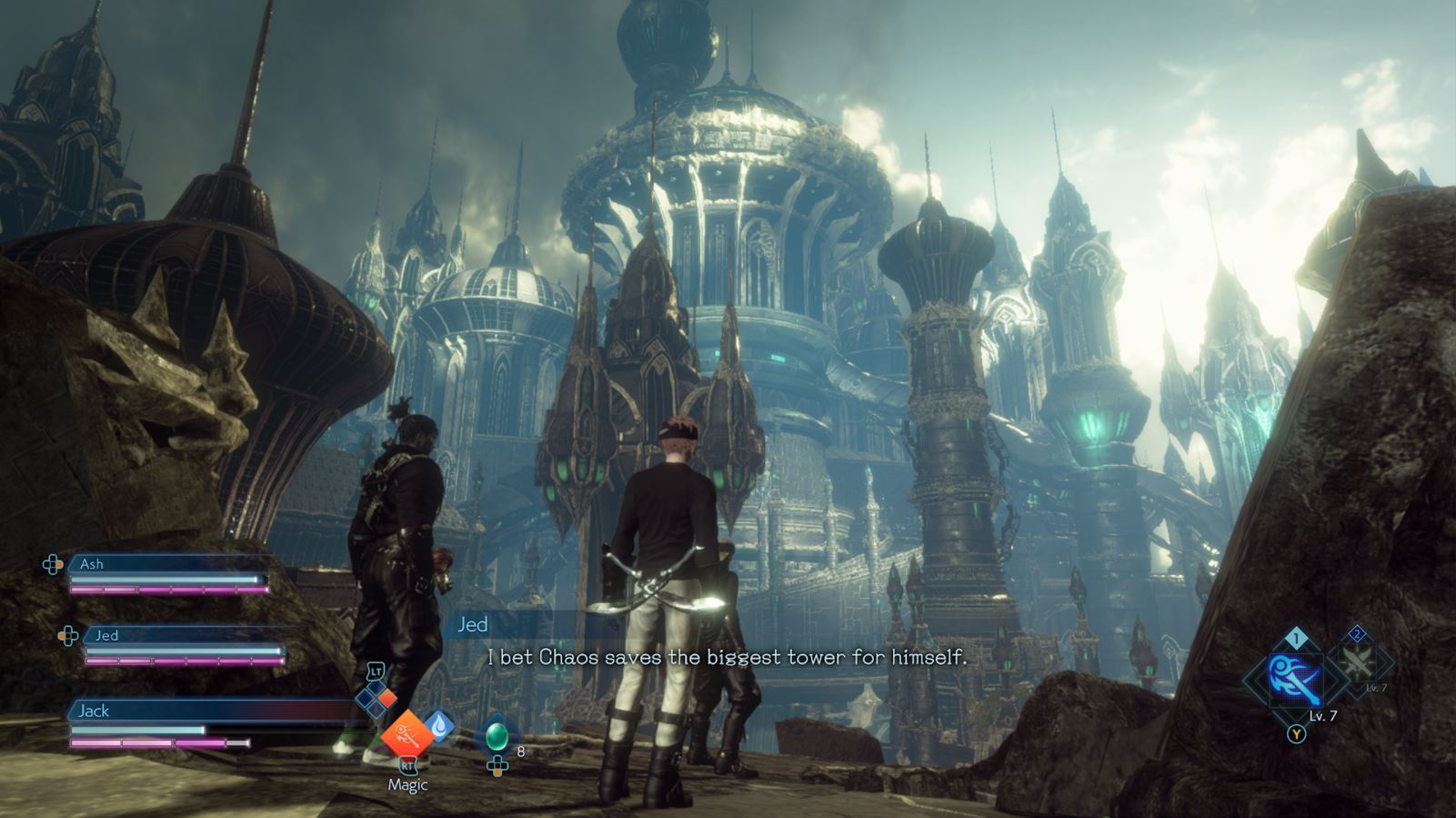 Stranger of Paradise: Final Fantasy Origin is scheduled for release on March 18 for PC, PlayStation 4, PlayStation 5, Xbox One and Xbox Series X/S consoles. It’s a darker reimagining of the world of Final Fantasy, not necessarily a remake in the traditional sense, but a reinterpretation of the world. Everything is darker and grittier than the original Final Fantasy. There are some elements that seem like they’re trying too hard to contemporize things. The Limp Bizkit ringtone, regardless of what someone might think about the band just seems ridiculously out of place. The character designs would have been nice to see more of Amano’s influence, but the environments look fantastic. But criticisms of design choices aside, the few hours spent as a stranger in paradise showed that when it’s time to deliver a fun gaming experience, Stranger of Paradise doesn’t disappoint in seamlessly blending the gameplay style of Nioh into the world of Final Fantasy.