In a recent hands-off presentation showcasing the latest in how Evil Genius 2: World Domination is shaping up, one of the team members at [developer] Rebellion remarked on how the original 2004 entry still has people playing nearly two decades on. A reality that, by Rebellion’s own admission, was rather a surprise to discover. It’s one thing to put out a real-time strategy game that’s appealing, it’s another to do so in a way that establishes such a loyal-enough fanbase of whom will continue to invest their time in a game though intertwined with systems, goes against the usual associations of warfare or city-building alike. Presentation is of course as much a vital part in any game’s longevity but it’s perhaps Evil Genius‘ use of sharp, bright colors — to compliment its focus on this rigid, quadrilateral arrangement of rooms and secret stowaways alike — that initially caught my eye at last year’s E3. 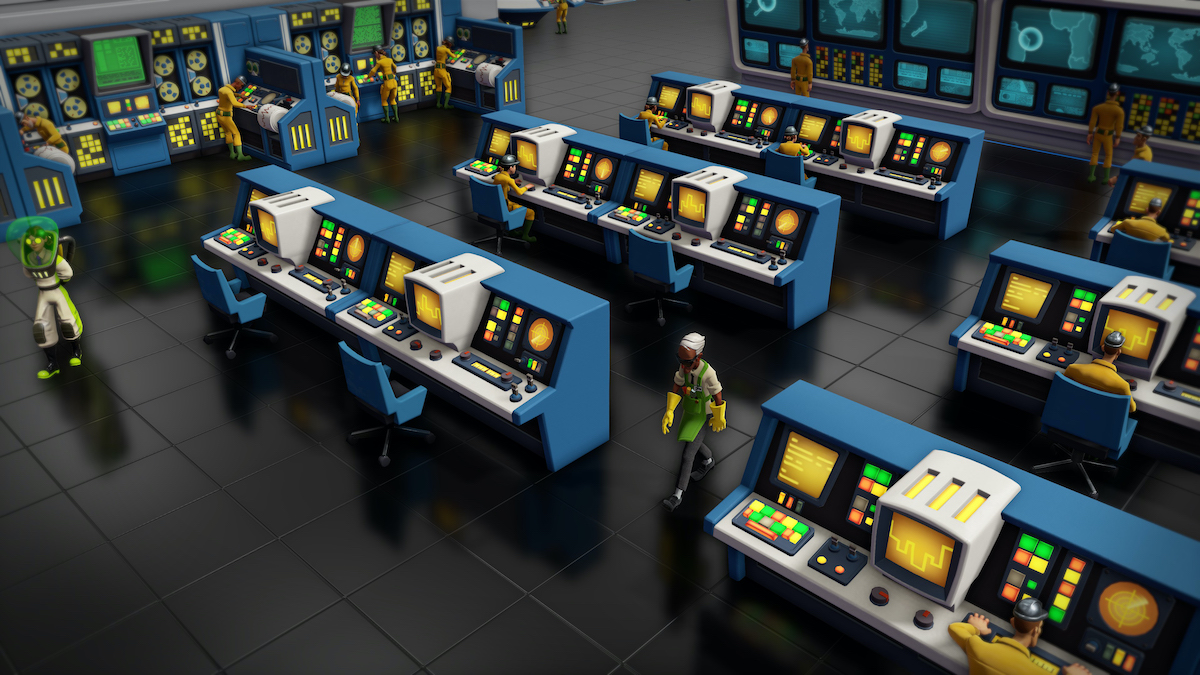 A sequel more than sixteen years in the making then, that’s a potentially daunting and concentrated kind of expectation to meet. The expectations of a fanbase who’ve stuck with the original for as long as this and as such, might not take kindly to a sequel that takes a lot (or even a little) away from the original’s charm. If anything, Rebellion look to have injected this with a touch more of the kind of quirk and subtlety that doesn’t take away from what the original got right. The aesthetic and overall premise may seem the same, but look a little closer and what you’ll notice is that the sequel actually has a lot more of a delightful charm than expected. Charm and maybe “delightful” may not be the first, or indeed most fitting, associations when it comes to a game revolved around cliched, maniacal world domination. Or in the case of the actual endgame and key objective of which you’ll be building towards: establishing a powerful-enough doomsday device so as to have unrivaled sway over the rest of the world.

Yet even if you were to diminish it to the idea of “playing the bad guy,” Evil Genius 2 is smart in that it doesn’t lay that antagonistic demeanor on too thick. And in fact is all the better of it; for all its systems and upgrade paths and key components one must establish before ever thinking about expanding base, perhaps the most significant and thoughtful moments of Evil Genius 2 lie in its subtler details. Namely the many hundreds of tiny, insignificant little animations that play out both amidst your secret base and within the facade of a perfectly-ordinary casino acting as your convenient source of income. Made even more insignificant given how Evil Genius 2‘s premise means the general top-down perspective of what one is creating has even more of an authoritative edge to it. More so than any strategy game pertaining to building armies or cities alike; these hundreds of characters being governed and ordered about are not just units, they’re minions. By-the-dozen nobodies that are getting on with their required role, whether that’s developing new technologies or training so as to upgrade from minion to the equally-flattering tag of “grunt.” 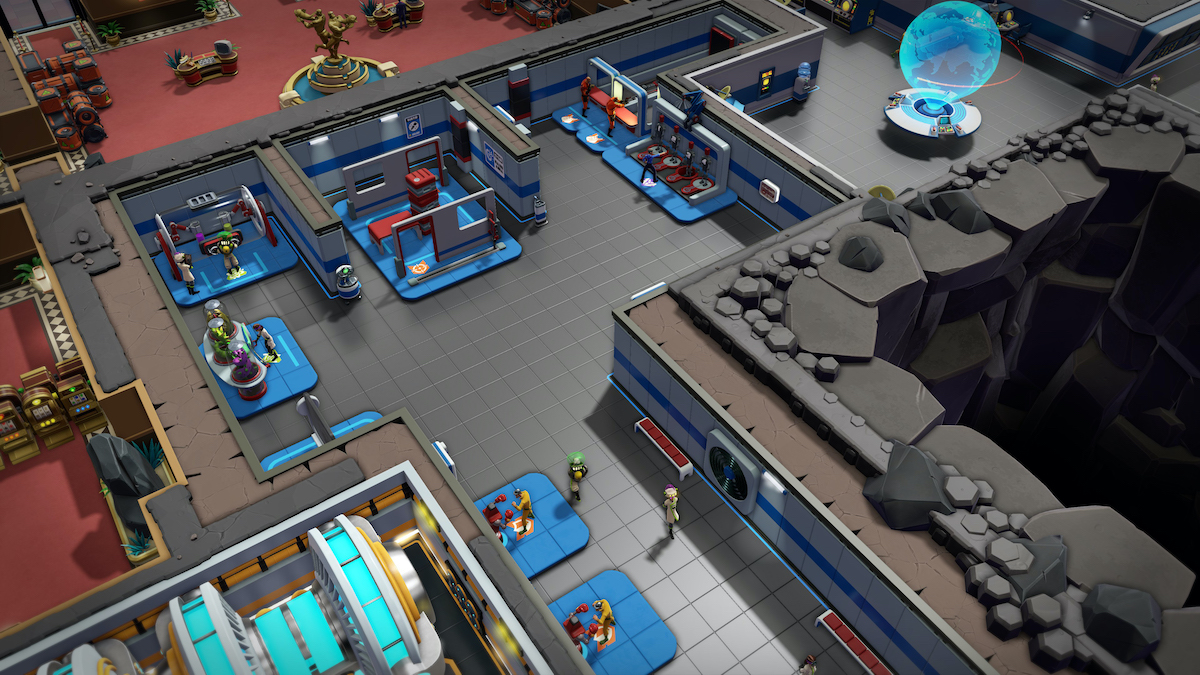 But instead of simply waving these off, Evil Genius 2 instead wants to make the most of its cartoonish aesthetic. It’s not a stretch to imagine the game not taking its concept all that seriously in tone, but the fact that pending devices for your base materialize as if they’re being inflated — to then drop down to the floor in a clouded thud — does suggest that Rebellion are putting thought into giving this sequel some personality. At the very least, making sure that players can get caught up seeing an endless cycle of the most simple of animations. Like an unknowing public continuing again and again to try their luck at the slot machines, or even a minion trying his luck at pulling out King Arthur’s sword (one of the many precious world items you can send minions out to gather and store at your base) and successfully, somehow, managing to do just that.

Close attention in the detail does have its role on the gameplay front though. A point where the rendition of would-be heroes — the Forces of Justice as they’re called — and agents alike come into the equation. While one of the main counters is of course to set up deadly traps, it’s pleasing to note that when asked on how the game will pitch such nuisances to the player, Rebellion state that it’s all about subtleties and seeing which of these seemingly ordinary, easy-to-blend-in minions, isn’t like the others. An agent in disguise or maybe even a “Super Agent,” by the game’s own descriptor, that will seemingly halt everything and require the player deal with the threat or risk losing everything in the process. Again, when asked about how the game will present this (are these similar to mini-bosses of a sort?) there are no erratic genre changes planned, but it’s an issue that nonetheless has to be taken care of and quickly. 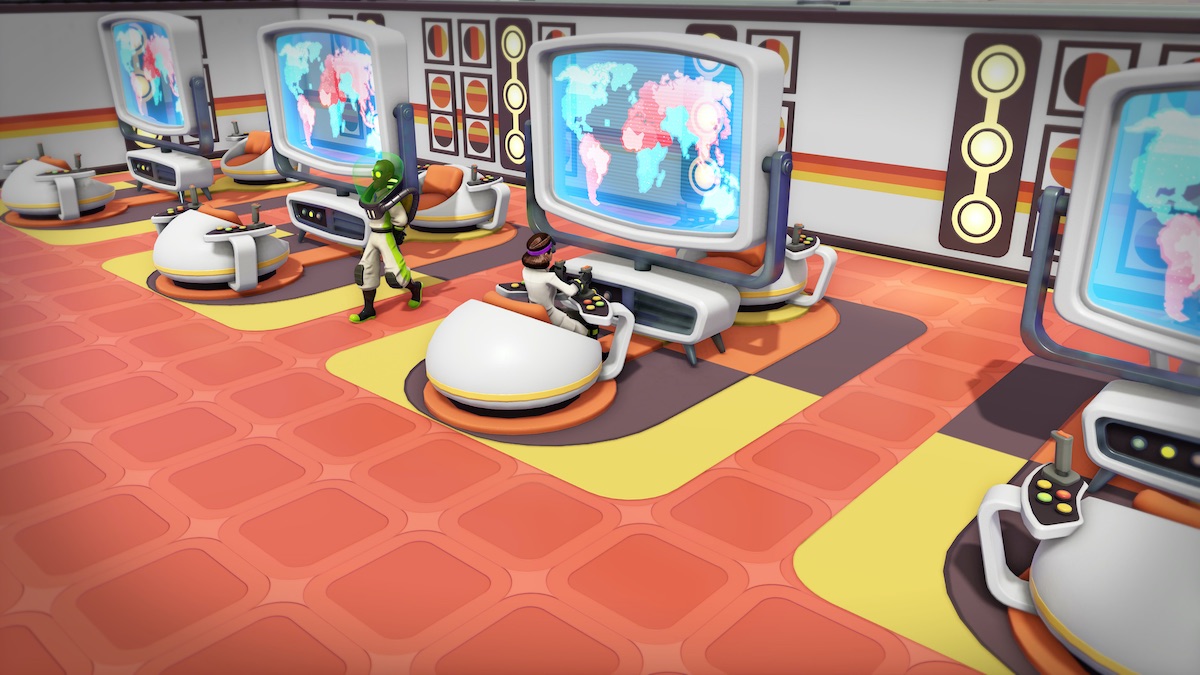 Though some may have initially been left disappointed that the game wouldn’t make it prior to the year’s end, from what little has been shown, Rebellion are making good use of the extra time for Evil Genius 2. Though there’s a greater focus on the smaller details and fleshing out the charismatic nature of an evil, diabolical plan to see through to completion, Rebellion’s contribution comes off more like a fleshing out of the original’s intentions and less like some rebranded “interpretation” of what the original may have been. It will please long-time fans to hear that the sequel is maintaining a lot of what made the original’s bright aesthetic feel anything but a distraction to the core premise. And in concentrating on both the finer and subtler details alike, the latest showing of Evil Genius 2: World Domination offers signs of promise. On top of everything else demonstrated well at last year’s E3. Rebellion clearly respect this IP and their additions via the sequel look to have found a way to bring this once mid-2000’s stand-alone strategy title into the present day.