Total War’s take on grand strategy has always been particularly grueling. The Creative Assembly’s historical warfare series started as a simple Command and Conquer knockoff, but the advent of full 3D graphics gave them an opportunity to create a proper simulation – an opportunity that they embraced. Total War’s battles last minutes, but in that time you need to manage your units’ morale, positioning and health while breaking that of the enemy – and that’s just one facet of the experience. On the campaign map you need to manage the buildings, resource yields, and happiness of dozens of cities, turn after turn, in gridless 4x gameplay that could give Civilization a run for its money. Building an empire is an immense undertaking, and with Total War Attila it promises to get even tougher.

Attila’s developers describe it as a “Survival Strategy” game, and it’s certainly an apt classification. Traditional survival games generally involve some kind of horror element, and Attila is no exception, but its source of terror is a little more grounded in reality. As harsh weather and political tension wears away at your faction of choice, you must also deal with the nigh-apocalyptic threat of the Hunnic hordes. The nomadic barbarians put the final nail in the coffin of the splintered Roman Empire, and in-game they prove to be an appropriately formidable threat. Their encroachment puts pressure on every other faction – but not so much as to prevent them from squabbling amongst themselves and tearing each other apart. Though they’re not available in the preview build I have access to, playing with the Huns promises to be a unique experience – with almost no capacity for diplomacy, their only mission is to destroy all that lies in their path. 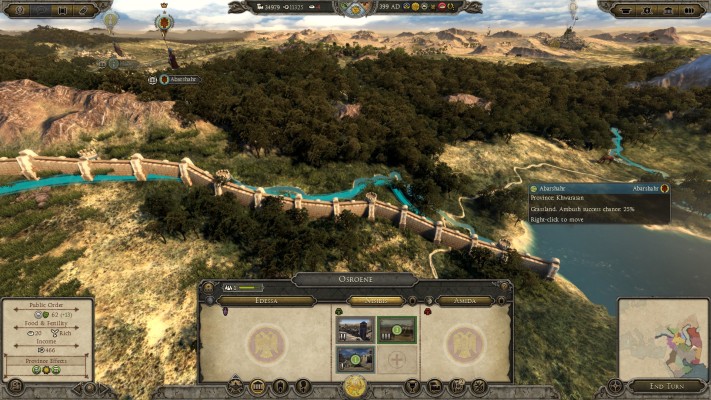 The Huns also make use of one of the biggest additions to Total War: Attila’s mechanics: nomadic hordes. To this point the Total War games have centered mostly on small kingdoms and large empires, each of which have their own advantages and disadvantages. Attila adds the “great migrators” to the mix – displaced cultures like the Vandals and Ostrogoths whose entire societies travel with their armies. These factions can make camp at any time, gaining many of the benefits other armies only have in their cities. This provides them with interesting strategic advantages, but they can shift to a more traditional playstyle by settling in a conquered city.  The Huns apparently play in much the same way (I was only able to use the Ostrogoths for this preview), except that they don’t capture cities – they raze them to the ground and move on to more tempting targets.

Whether you take a moving culture or one with many stationary cities, you’ll need to deal with a number of new intricacies. In addition to matters of foreign policy, you need to pay close attention to internal politics. Matters of succession are handled through an intricate family tree, which details every birth, death, and political marriage that happens over the course of your campaign. Your family members can be used to secure alliances, lead your armies, and deal with threats from within. Of course, your ruling family wields great influence over their nation, but so do a number of political rivals who can cause serious trouble if left unchecked. Should their loyalty wane, these leaders can splinter your faction with a civil war, but if you keep them happy they can be powerful allies. If they become a threat, there are a number of ways you can deal with them – ranging from character assassination to actual assassination – but to manage that your family members will need to be more influential than they are. The danger of losing control of your own armies adds another layer of tension to Total War’s already intricate strategy dynamics, and fits well with the series’ emphasis on simulating troop psychology in combat. 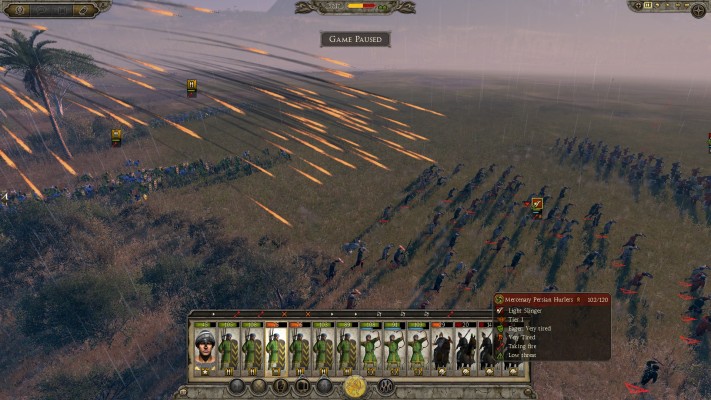 Total War: Attila doesn’t change much when it comes to the series’ fast-paced real time battles. Terrain, weather, formation and cover all still play vital roles, and your goal is often to break the enemy lines with shock and awe rather than to slaughter every last opposing soldier. Battles are immense in scope and scale, with thousands of soldiers fighting and dying on the field at once. It should be little surprise, considering that Shogun II is still used for benchmarking four years after its release, but Attila is gorgeous. Every environment is packed with detail, including realistic foliage, terrain, and water, and despite being rendered by the thousands the character models look really good up close. You can freeze the action at any moment in a battle, which is useful for making tactical adjustments, but also looks damn cool. Seeing hundreds of flaming arrows hanging in the air above an army is enough to send a shiver up your spine, and when you set the game to slow-motion the animations don’t disappoint either.

Whether you’re looking for an in-depth historical simulation, a challenging grand strategy game, or simply a way to put your graphics hardware to the test, Total War: Attila seems set to deliver. There are more facets to empire management than in any previous series entry, and the new horde factions add an interesting wrinkle to what was, up ‘til now, a somewhat static game of conquest. By all indications, this game should satisfy on all fronts when it comes out later this year.