It’s impossible to overstate how hard Doom landed and its effect on gaming over the years. The 1993 FPS has influenced action gaming since the moment it came out, frequently in unpredictable ways. One of the stranger diversions was DoomRL, short for Doom the Rogulike, which took the original game’s setting, atmosphere, attitude, and creatures and transformed it into about as different an experience as possible outside of a sim-life farming game.  DoomRL was an overhead-view turn-based roguelike that did exactly what the name implied, fusing Doom with randomly-generated permadeath dungeons long before Binding of Isaac made it cool again. A 2016 Kickstarter for DoomRL’s sequel brought enough attention to the game to get a C&D order from ZeniMax/Bethesda, but by then the last stable version was a few years old. DoomRL turned into DRL and went open source and the Jupiter Hell Kickstarter completed successfully. Two and a half years later and the game is only a few months off from its Early Access release, but my hands-on time at PAX East left me immediately ready for more.

Jupiter Hell starts off like any Rogue-base game in that you’re in a room with a few exits and a minimal number of options. Each time you move so does everything else, while standing still gives you all the time in the world to consider your options. Jupiter Hell is based on an action game and plays very much like one if you’re feeling impatient and overconfident, but once you spot an enemy, it’s time to take a moment and think about the next move. The available actions can be broken down to Explore and Kill, but the game isn’t going to make the latter task easy.  The sounds of opening doors and snarling beasts on top of the growl of a metal guitar lets you know there are bad things roaming the unknown corridors, but the soldier has a pistol and plucky can-do attitude, and what can all the forces of hell do against that? 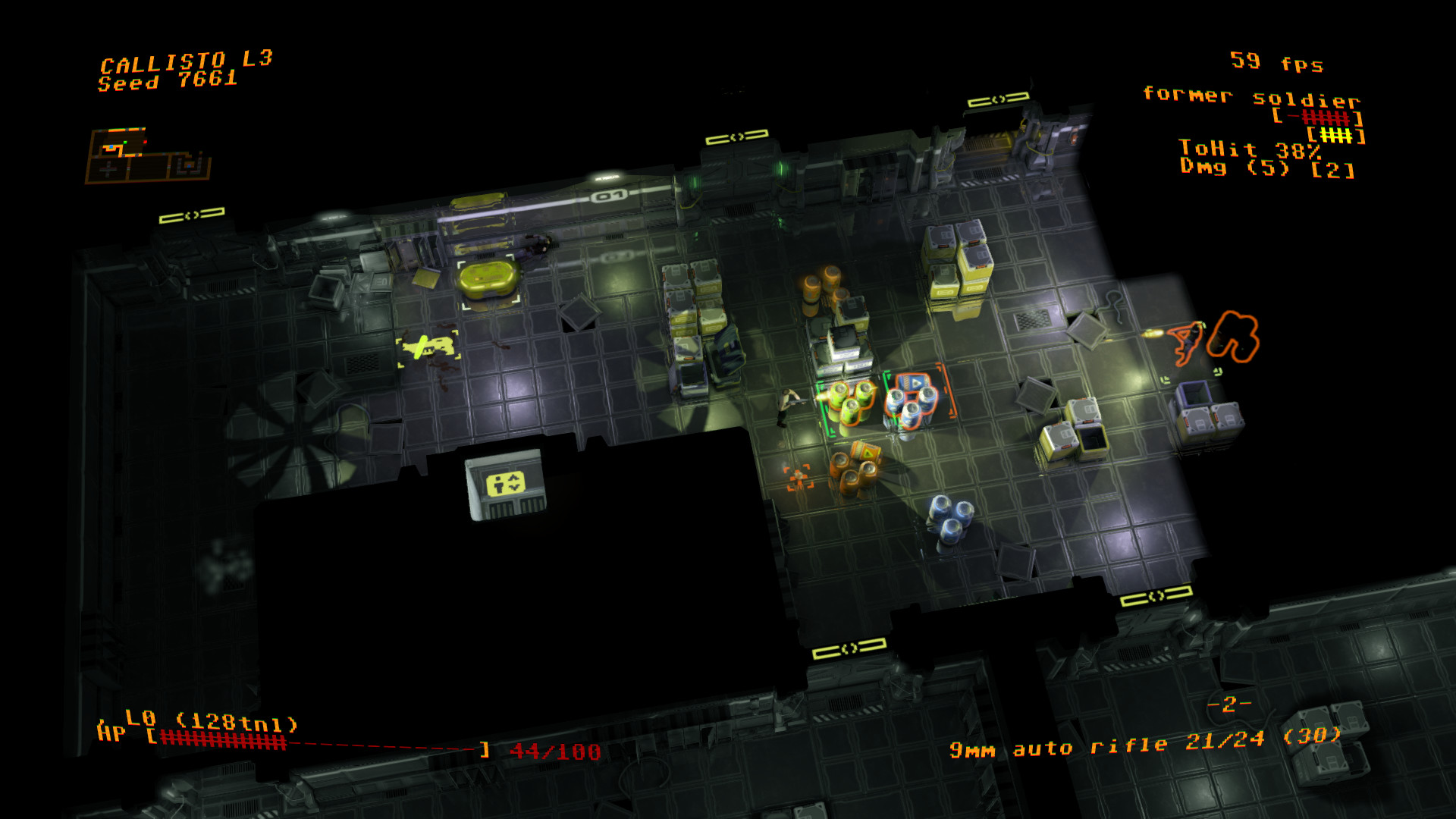 Not much at the start, as it turns out.  The initial former-grunts and other corrupted militia aren’t a huge threat individually, especially if you’re careful to use cover.  Standing in a doorway or just around a corner gives the enemies a major disadvantage in targeting you, although the same is true if the situation is reversed.  Positioning is one of the major keys to survival and even the tough Marine can feel deeply fragile when running out in the open.  Thankfully the initial starting levels are littered with boxes and other items to use for cover, although they’re easily destructible and will fall apart in a few hits.  The base also is heavily stocked on gas canisters and sinking a bullet into one when you suspect there’s an enemy or two hiding in the shadows is never a bad way to enter a room.  Your view only extends so far, after all, so a nice chain reaction extending beyond the line of sight is a handy little insurance package.

Due to Jupiter Hell‘s random nature, though, even the first level of Callisto Station can be a killer.  While it’s designed to let you in without being too brutal, it only takes a guard or two at just the wrong spot to whittle down your health, but the real killer is overconfidence.  Bad luck can be mostly circumvented with good tactics, such as knowing when to run away to a better position while relying on the bonus that movement gives to dodge, but walking around like the lord of the station simply because the last dozen demons couldn’t lay a finger on you is a great way to turn a solid run into a Game Over screen.  The early guards and drones of Callisto’s opening base are backed up by much bigger, tougher demons and mechs later on, and multiple pathways to whatever lies at the end provide even more creatures to blast through if you can only survive the trip. 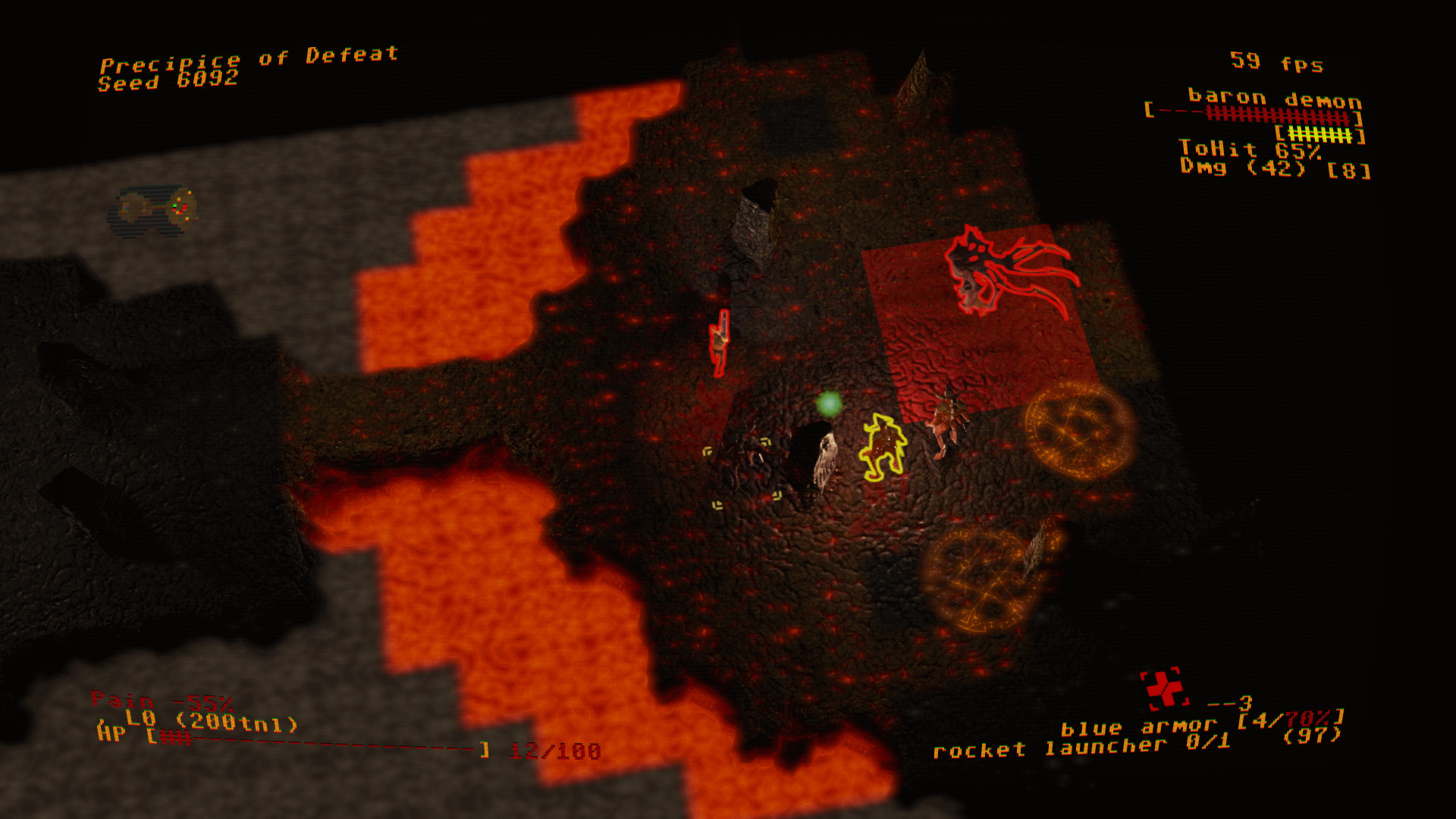 The starting pistol won’t really do much against the bigger threats, but each human enemy is not only armed but also carries ammo for their gun.  Scavenging a shotgun and automatic rifle raises the odds of survival immensely, almost as much as remembering to reload after every single firefight.  Most levels also have a chest or two with health packs, ammo, grenades, armor and sometimes if you’re lucky a rare upgraded gun.  Jupiter may be hell but it’s generous with the supplies other than health, but all that firepower doesn’t do a lot of good when surprised by a pack of demons.  There’s nothing quite like dying with medkits sitting unused in inventory due to not being cautious enough going around a blind corner.

The moons of Jupiter are no place for a lone soldier with no backup or supplies beyond what he can scavenge, but it’s a bit late for regrets at this point.  The only way out is through, and a while each level-up grants a perk there’s still a lot more demons than there are upgrades.  Survival requires good tactics and the patience to follow through on them, because while it may have the look, soundtrack and attitude of a ’90s FPS, that’s just a cover for the Rogue-style game that’s the heart of Jupiter Hell.