Cats may be adorable fuzzy-headed little affectionate purr-beasts, but they’re also highly-effective predators, and the only reason humans don’t think about it too much is because we’re too big to be considered edible.  Unless we die unexpectedly with no other food source in the apartment, that is, in which case all bets are off.  The point is that there’s a reason cats make the perfect bad guys, despite the improbability of the idea that enough of them would work together to form a Feline Empire.  Suspending disbelief enough to accept a rebel bird army flying fighter planes against a foe with the infinite resources necessary to populate the skies of Steambird Alliance is one thing, but the thought of cats working together is pushing it.

Steambirds Alliance is a free-to-play massively multiplayer arcade shooter from one of the original developers of Realm of the Mad God, currently in closed beta but getting ready to head into open beta at an undefined point best thought of as “soon.”  It only runs on Friday-Sunday at the moment, with the weekdays being used for development, and after losing a weekend’s gaming to it I can safely say Steambirds Alliance is shaping up into a pleasantly dangerous time-sink.  After a brief tutorial the game dumps you in the center of a low-level area, at which point you’re left to your own devices.  The map scrolls away in every direction, viewed from the top looking down and plays like an arena shooter with no boundaries. The first ship you get is basically a drone and it controls like the standard twin-stick shooter, but there’s a second robot-ship with a giant sword waiting to use back at home base and plenty more to unlock. 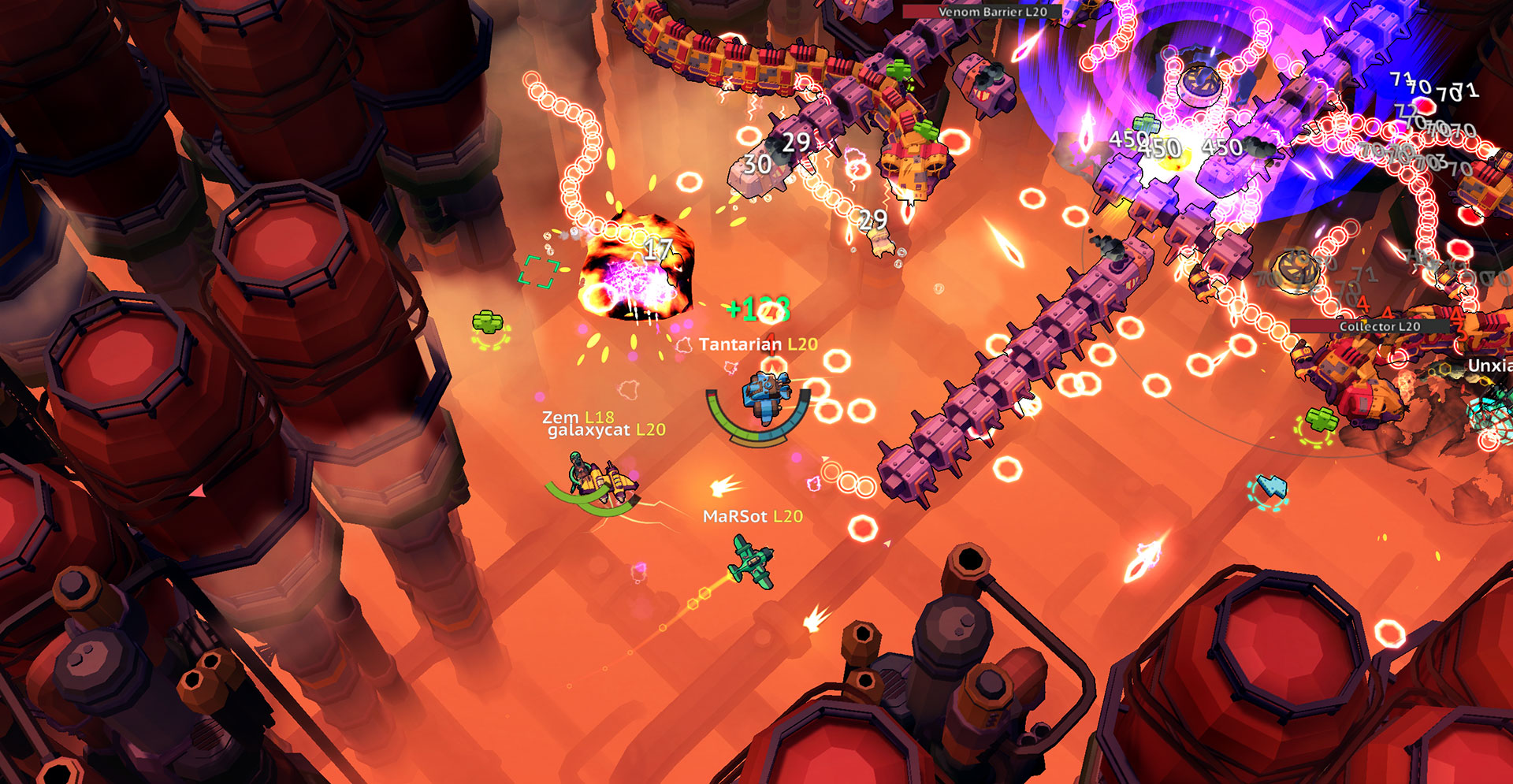 Every ship comes with a main gun and a secondary ability, plus a speed-boost that’s great for covering long distances but terrible for tight maneuvering.  Defeated enemies can drop one of four different power-ups for speed, armor, gun, or special ability, plus health and special gauge.  The nice thing about the latter two is that they fill up their respective gauges to the top, no matter how close to empty they are, as does leveling up.  Death is inevitable, and knocks your ship back to Level One with all pickups destroyed, but once you learn the game’s rhythms it’s fairly simple to get your feet back under you while powering up the newest plane in your hangar.  Steambirds Alliance tries to keep you to alive every bit as much as it attempts to kill you and it badly wants both things at the same time. The trick to advancing towards whatever goal you’ve set for yourself is knowing when to fight, when to run away, and when to seek out allies.

While Steambirds Alliance is massively multiplayer, with servers that can hold up to sixty players at once, it’s absolutely possible to approach it on your own terms.  Taking a ship from a starting Level 1 with zero-class attributes all the way up to level 10 with a nice loadout isn’t particularly hard, but past that it gets significantly more dangerous and you’ll want to seek out other players.  The nice thing about this is that everyone gets full experience from any enemy killed in their vicinity, whether they sunk a bullet into it or not, and all loot is specific to each player’s instance so you don’t have to worry about anyone taking your goodies.  This means that sure, playing with friends in a tight-knit formation is possible, but loose groupings of people that last for a minute or less work nicely as well.  Even if you want to go it alone, however, other people are handy because they show as green dots on the edges of the screen and pointing your plane at one means you can teleport to their location.  Each player is a quick-travel, but whether you join up or fly off, it’s completely your call.  Of course, if you’re flying a low-level ship in a high-level area, it might make more sense to hang around and get a few levels while scavenging some upgraded components, if the Gods of Loot Drops smile down on you. 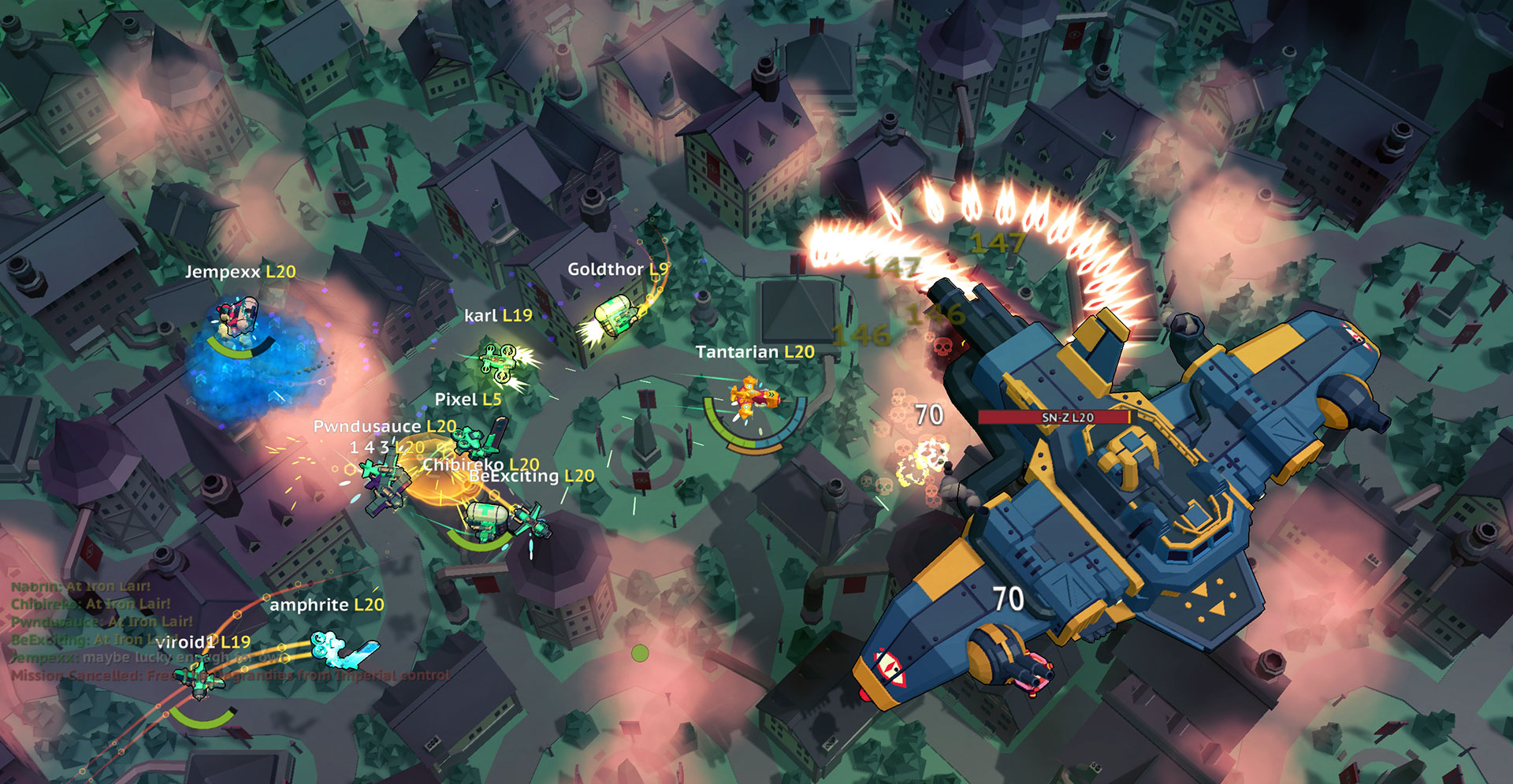 Leaving it to chance isn’t entirely necessary, though, thanks to the facilities back in the rebels’ home town.  You can teleport back at any time in combat simply by hitting a button, although to avoid it being a Get Out of Death Free card there’s a five-second countdown timer before it kicks in.  Once back at base both health and energy gauges are fully recharged and you can fly into several different airplane-friendly buildings.  The hangar lets you swap planes, a pub has missions and rewards for completion, the warehouse lets you leave items for later use, and other buildings have more advanced functions.  Once I’d had a bit of experience I used the warehouse as a dumping ground for any component level 5 or greater, not only because lower tier health/armor/etc items are common enough that they show up quickly in a new run, but also because space is limited.  The hangar, for example, starts off with two spots for ships, so you can bank a powerful plane for special occasions while working on a different model.  Purchasing more space in the hangar or warehouse, or new paint jobs for your ship, requires buying gold with real-world money.  Part of me wants to grumble about having to buy a new color so my planes aren’t all a generic green, but the rest of me realized I played a dozen hours over the weekend for free and plan to do the same thing again as soon as the beta opens up again.  The items for sale mostly range from helpful to cosmetic, although there are a couple of special missions for sale as well, but the important thing is that at no point did Steambirds Alliance feel pay to win.  It would be nice to have these things but is by no means necessary.

What makes Steambirds Alliance work as well as it does is that there’s always something to work towards and little in the way of a skill ceiling.  Even when I had a ship topped out at level 20 with powerful guns it would still be disturbingly easy to die in a mid-tier area, because enemies come thick and fast and can be utterly merciless.  One area might have giant mecha-whale-sharks backed up by manta rays, both with dense patterns of firepower, while another has small shielded bases that need their surrounding towers shot down before they can be destroyed.  Another area had flying trains laying down laser-tracks behind them, and you could either shoot the cars behind it or take out the engine and let the cars explode one by one as they reach the end of the line.  The tougher areas had giant robo-lions, guards, huge guards and little crate-carrying slave-bots flying everywhere, all packing the screen with as many bullets as it could hold.  As crazy as it gets it’s still possible to survive alone but working with other players actually improves the combat, especially when everyone uses their secondary skills to boost the abilities of the group.  Steambirds Alliance works amazingly well as both a classic-styled arcade game and a chaotic multiplayer co-op shooter, with the current plan being to keep the updates coming for as long as the player-base justifies it.  With as polished as the game feels in its closed beta, that seems likely to translate to a long, healthy flight through the bullet-choked skies of the Feline Empire.