tinyBuild have always been a wild card as an indie publisher in the sense that you can never predict just what kind of game they’ll choose to publish next, as well as arguably the quality of their games. When their latest title was being revealed, one of my own HG colleagues basically said there would be a 50/50 chance if it’s good or not I myself appreciate the publisher’s willingness to take chances even if that means the occasional dud sometimes. And after getting some time with a few of their upcoming games, I can say it looks like tinyBuild’s knack for investing in creative titles will still be paying off…for the most part.

If there’s one title tinyBuild was showing off that they’re clearly preparing to release as their next big game (well, aside from any Hello Neighbor spin-offs), it would be Rawmen. Developed by the California-based Animal, what they have crafted is an elegant, fast-paced and classy multiplayer experience. One that just happens to be about a bunch of naked men battling each other with soup. Yes, you read that correctly. Rawmen is clearly going for a humorous tone here, and it succeeds, largely thanks to the ability to incorporate cute food puns into the power-ups and gameplay mechanics, as well as gorgeous and charming graphics and artwork provided by highly talented individuals such as Beezul, giving the world and character perfect touches that make the ludicrous premise work. It succeeds in adding a lot of flavor to the game, pun semi-intended.

Now, if you were to look at Rawmen in motion, immediate comparisons to Splatoon may spring to mind. And you wouldn’t necessarily be wrong, since you can notice a few similarities to Nintendo’s multiplayer shooter in the way Rawmen handles. Like with the ink in Splatoon, you can slide around on broth in other to traverse areas faster, and you can also attack enemies with it, but you can only do so for so long before needing to replenish it. But slides also use broth as well, so if you use up too much broth getting to a vital area only to be ambushed by an enemy with no quick way to replenish it, you can be screwed. So there’s a bit of strategy in managing your broth well.

As for gameplay modes, the first one I was able to experience a while back was Broth Battle, a standard point capture mode where the main goal was to get near a pot of broth and have your team hold it down for a set amount of time until the next one activated. It was fun stuff, with a nice challenge level and some cool power-ups to work with, but the highlighted mode in the latest demo is the Meatball mode. The concept is simple: a giant meatball is deployed in the middle of the level, whichever player grabs on to it first can roll it around, rolling it into the enemy’s goal scores you points, and whoever has the most points when the time is up wins. 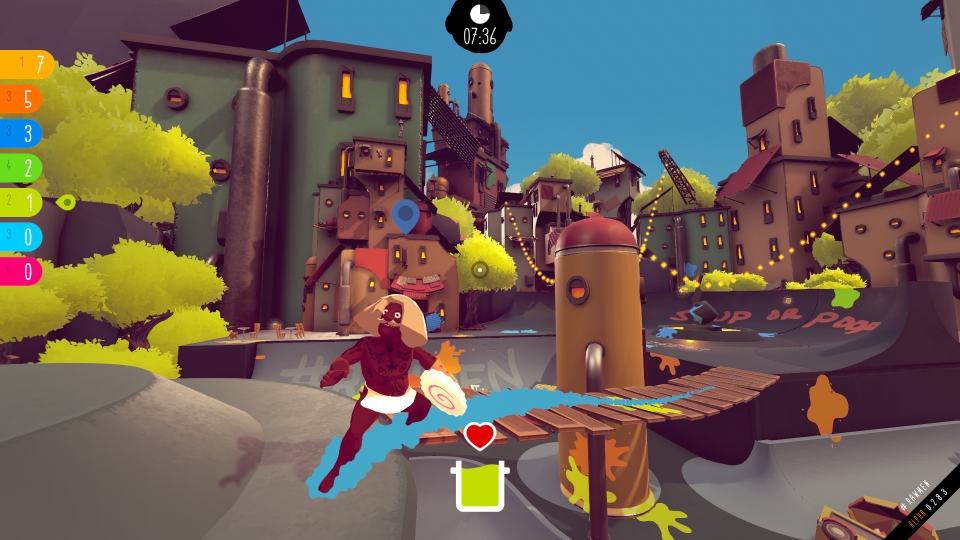 So for this mode, imagine that the Splatoon comparisons have now expanded to include a bit of Rock of Ages. This extends to the opponents putting up defenses such as wall biscuits and being able to destroy your meatball, requiring you to figure out the best route possible to the goal and rely on your teammates in assisting you on your journey. The levels in Rawmen are nicely crafted, giving you several surfaces to slide on, bounce off of and gain good vantage points for potential attacks. Much like fellow upcoming multiplayer game Fall Guys, we have another case of genius in simplicity here, wrapped in a nicely insane package and a great comical style.

That description easily applies to Fluxscopic’s Mayhem in Single Valley as well, the latest game to join the tinyBuild family. When it was first announced, the description said it was a mixture of Stranger Things and The Legend of Zelda. The latter’s influence may seem obvious at first, with the top-down action and retro style, but it’s a bit different when actually playing it. Jack, our hero, actually can’t fight back against the hordes of radioactive animals plaguing them. Instead, players will have to go on the defensive. You’ll have to gather food like acorns and carrots in order to throw them and distract enemies in order to get by, as showcased in the demo. It’s a unique twist on one may expect and controls nicely. 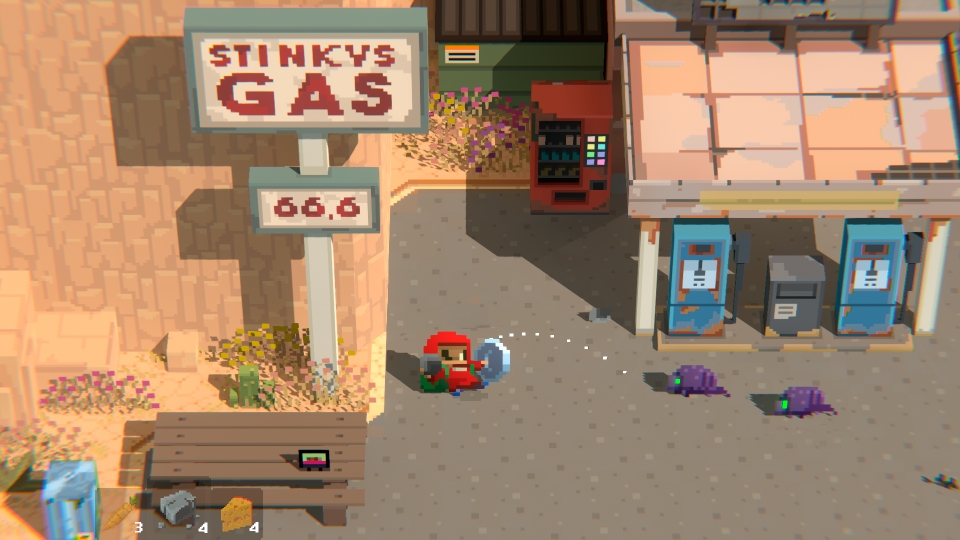 Mayhem in Single Valley is set to have a lot more in it, though, including a greater emphasis on puzzles and NPC reactions. But the demo I played largely focused more on platforming and distracting enemies. Of course, the overall goal in recovering Jack’s backpack full of supplies did require a physics-based puzzle revolving around moving a giant piece of wood in order to create a bridge to get fuel on the other side needed for a vehicle. Which I succeeded in completing…only to accidentally find myself in an unwinnable state when it turned out that my makeshift bridge couldn’t handle the trip back.

Alas, such is the risk with early demos like this, shown off before all of the kinks are ironed out. But Mayhem in Single Valley still has a lot of pros working in its favor, like its unique blend of 2D and 3D visuals, its sense of humor or its impressive soundtrack. As we noted with initial trailer, it also aims to have even more mechanics later on, resulting in more advanced puzzles. So it seems like a clever take on a classic formula to watch out for, shaping up to be something great.

The last tinyBuild game I was able to check out was Laughing Machines’ UnDungeon. The premise behind it is captivating: seven different Earths have been ravaged by the Shift, a massive event that ended up merging all the different worlds together. From each of these seven worlds comes a Herald, all seven of which form the secret organization of Herald’s Undercover Bay. Playing as one of the Heralds, which include a mystic trapped in a floating sarcophagus, a tiny creature traveling with a giant jungle golem and a dead reaper-like creature, you have to travel to an ancient city in order to finally restore the Multiverse.

It clearly aims to be an epic, sprawling story with a lot of unique characters, incredible hand-drawn pixel art, and the ability to alter the world by shifting between dimensions and time periods and making alterations in them…which, unfortunately, meant that it didn’t make for the greatest demo. UnDungeon clearly requires a larger taste of it in order to experience everything it has to offer. Unfortunately I only had a demo that lasted about fifteen minutes and most of my time was just spent on the combat. And don’t get me wrong, it’s solid combat, but nothing too special, just your standard dash/light attack/heavy attack stuff, with my character wailing away on killer insect-like creatures. UnDungeon may be destined for greatness, but it’s going to be a little while before we experience the more interesting mechanics and its full potential in general.

So while it feels like it can be tough to judge any of tinyBuild’s upcoming offerings from a single demo (in contrast to an Early Access game like Not For Broadcast), there’s a ton a promise here. tinyBuild may indeed be a bit of a wild card, but if all goes well, it looks like they’ll have the ace in the hole needed to garner a ton of success.