As one of the biggest next-gen releases, Titanfall has a lot weighing on its burly, metallic shoulders. This Xbox One exclusive is one that Microsoft is hoping will win people over in the console war, while Respawn Entertainment is counting on their debut effort — since the Infinity Ward split — to put them firmly at the top of the FPS heap, and with a new IP to boot. After an iffy launch window with Battlefield 4, you can bet that EA also wants to make sure this game hits on all cylinders as soon as possible, too. Even in its limited beta form, it’s clear that Titanfall is poised to stand high atop the FPS mountain for the next generation.

Upon starting the beta, you can choose to either do training or head right into the heat of battle. As someone whose FPS playing is limited to say the least, the training was a valuable tool. While muscle memory will carry you to some degree, you’ll definitely want to nail down the timing of the first-person wall-running and double jump mechanics. Mirror’s Edge veterans will be able to have their parkour skills transfer over quite nicely. The on-foot pilot controls are incredibly responsive, and the control scheme is intuitive. Beyond the parkour enabling you to run along most surfaces and traverse the massive environments, for both amazing views and vantage points, what makes Titanfall stand out are the giant mechs you pilot.

The game gets its name from their dropping from the sky, called the titanfall. This takes a while to gain access to during a battle, but is worth doing if you want to feel like a giant amongst mere mortals. Piloting a titan is tougher than just being on-foot, but the controls work well here, too. A and the left stick allow you to dash around in limited bursts controlled by an energy meter you’ll need to keep an eye on, LB allows you to catch oncoming fire and shoot it back at enemies and RB activates your secondary weapon. Just like with the on-foot controls, pressing in on the right stick activates your melee attack. While pilots get an iffy thrust kick, titans get to just punch the crap out of stuff. It’s the best video game incarnation of Rock ‘Em, Sock ‘Em Robots ever! 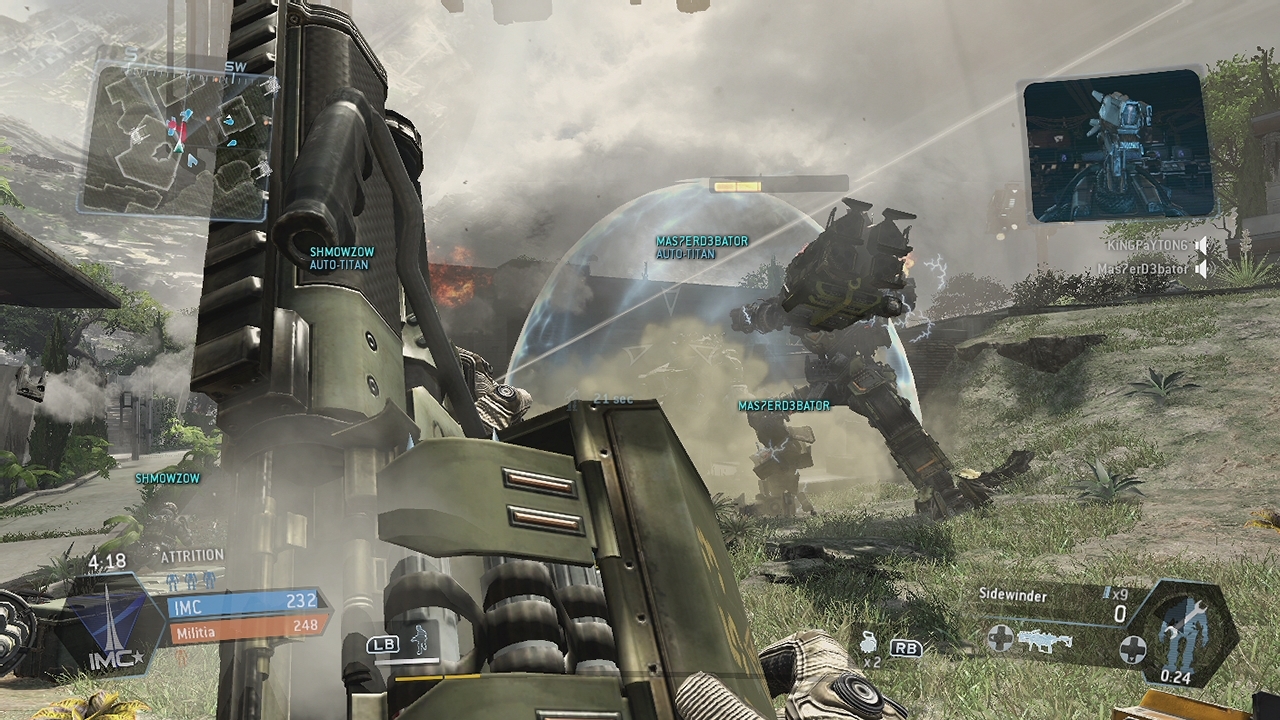 It’s fun to play as a titan and kill both other titans and the pilots on the ground, but there’s a particular feeling of accomplishment that comes from playing as a pilot and taking down a titan with just your anti-titan weapon. You can set which weapon you’d like to use during the pre-match loadout screen, but I tended to stick with the sidewinder. While other weapons work better at doing more damage, this one does a lot of damage quickly and can easily be used against other pilots on the ground in a firefight.

Toppling a titan as a pilot provides a thrill once reserved for the taking down of a colossus in Shadow of the Colossus — although you have far more backup here. Playing support in this role is incredibly risky, since you’re constantly tempting fate. As with storm chasing, your minute-to-minute decisions could be right, and your perfect targeting will allow you to take down a titan and then swiftly leave the area for a bit to heal. But it could also lead to your immediate downfall, which is also thrilling. I’ve had some fun sessions where I would take one titan down, only to be immediately gunned down by another waiting behind me. Getting too caught up in the fight and not paying attention to the HUD slayed me, and it was well worth it.

Playing competitively may seem like the only way to play an FPS to some degree, but Titanfall‘s action-heavy approach allowed me to focus on just enjoying the ride, never focusing on things like kill streaks. Concentrating on the fun enabled me to achieve impressive streaks regardless of my approach, because it was easier to learn the mechanics with less pressure. I only felt overwhelmed in my very first game. After that, I felt like I could at least contribute by going after titans as a pilot, occasionally piloting a titan when we were in the lead, and focus on taking out folks on the ground with the smart pistol — which is one of the niftiest little handguns in gaming, because it’s quick and allows you target multiple parts on one stationary target for a kill, and also target one part of multiple targets simultaneously for a group kill.

You may wonder if it’s actually as useful in the heat of combat as it is in training, but since players tend to camp out in groups (at least to regroup before splitting off), you’ll find yourself with at least one chance to use it every few missions. And that’s just if you want to knock out multiple targets — it’s incredibly easy to get into a firefight with it and win as long as you effectively dash around to avoid fast-fire. 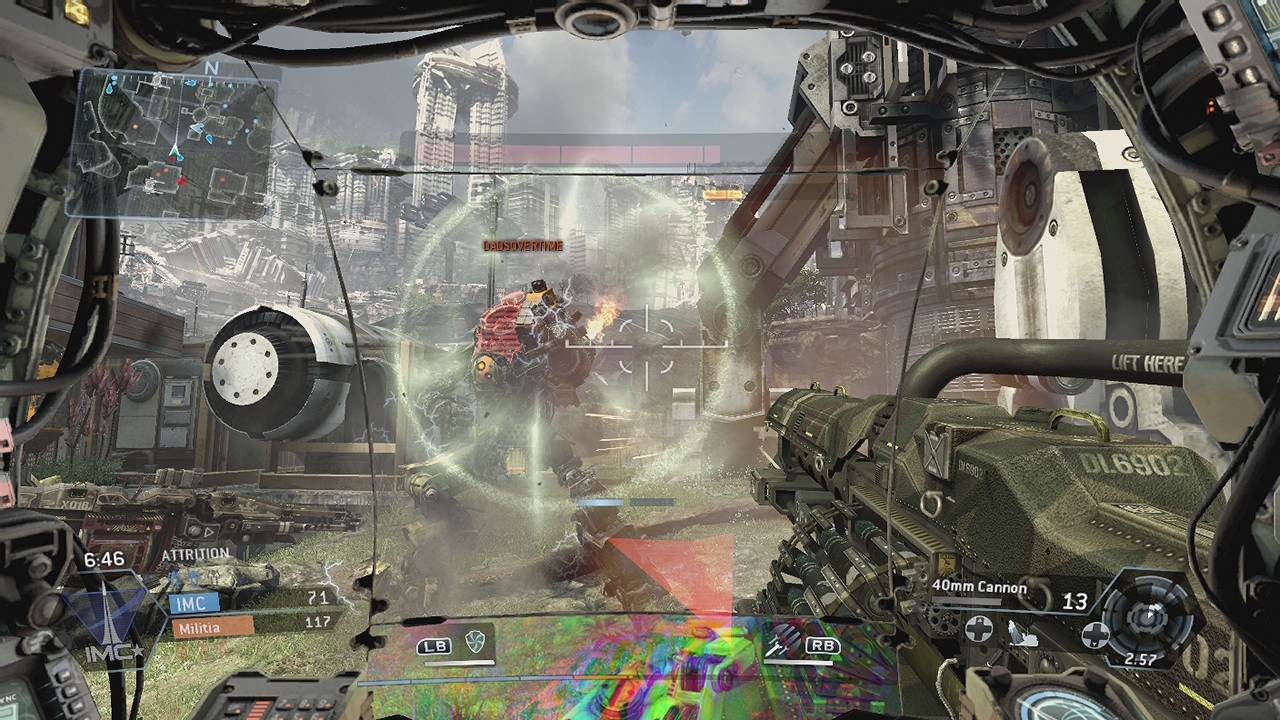 The beta boasts three multi-player modes — Attrition, Hardpoint, and Last Titan Standing. Attrition is essentially a team deathmatch, where two teams start off as pilots and then, depending on levels and short-term boost cards, get to eventually pilot a titan. This mode is a ton of fun, and despite hours of play, zero homophobic or racist nonsense was spewed during that time — a minor miracle! Hardpoint is a more challenging version of a territory-protection mode, where you’ve got A, B, and C buildings to protect. Doing so nets you 75 points of XP for each short time period that expires with it being in your team’s command. The key here is to have everyone actually work as a team and try to station at least two people to defend a building (and maybe one titan if possible).

The last titan standing is the toughest mode of the bunch. Each team gets some titans and grunts. Each titan-user gets one titan and that’s it — losing it is permanent, demanding your fight as effectively as possible. During a regular battle in a titan, they’re a bit disposable since you can get replacements. In the last titan standing, there is no such crutch. You only get one and need to make sure to protect it. Sticking and moving works well, and if you’re a fan of going with a melee-heavy titan attack, then you need to rethink your strategy ASAP. You’ll still be able to take titans down in pilot form after losing your titan, but die there and that’s it until the end of the round. You can still win here though — it just requires smart playing against the titans and their grunts.

Even in the beta, little things are in play. For example, burn cards are accessible. Burn cards are basically little booster packs that can make a big difference if you pick the right one. While the servers have had some hiccups during games, and a couple of prime time-hour play sessions resulted in some teleporting opponents, the beta was incredibly stable for the first day. The soundtrack on display in just a few modes is already epic, and would be at home in both God of War and Journey. It sweeps from real intensity to relaxing and manages to both pump you up and calm you down so that you can concentrate.

Hearing the robotic voice bark out important info — like your titan being ready in X amount of seconds, or having to evacuate quickly, never ceases to amuse because of how entertaining the voice is. It’s not exactly GLADOS, but there’s a nice sense of urgency to it that kicks your ass into gear. Similarly, the rumble of the buildings as the titans near adds a sense of panic to things — the same goes for the rumble motor that kicks in when a ton of stuff is blowing up; it’s an adrenaline-filled experience. 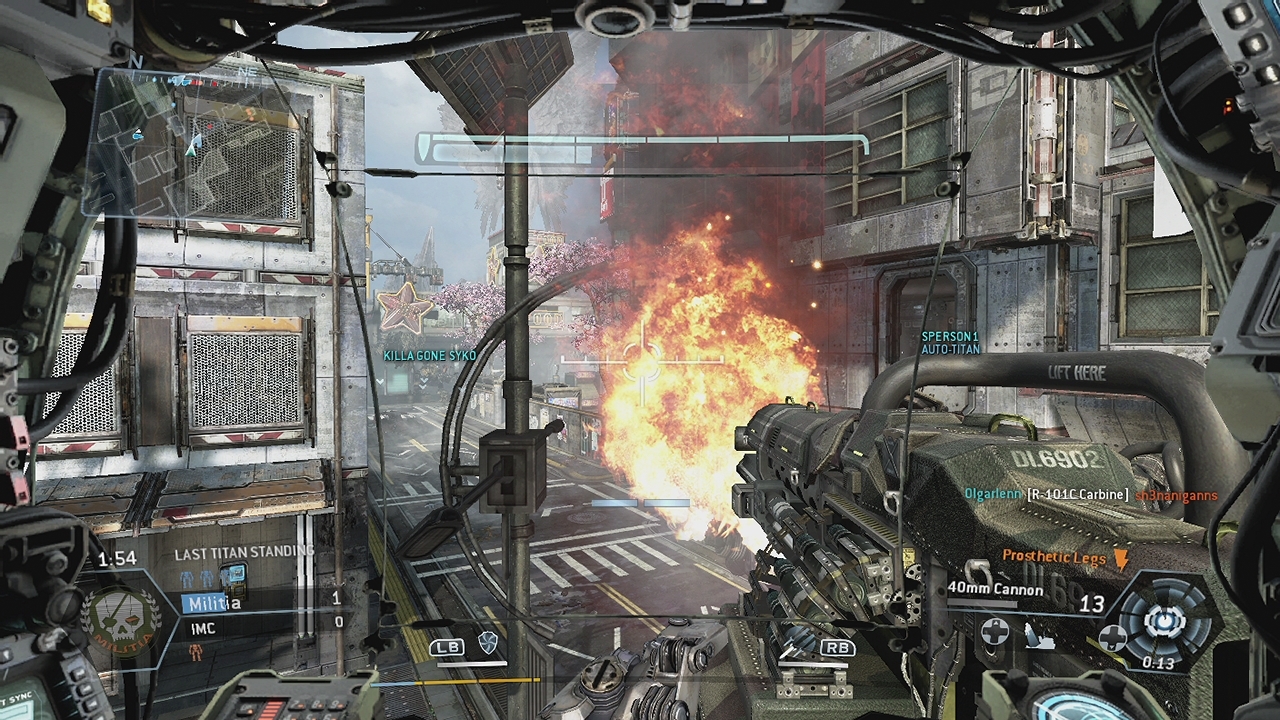 Titanfall‘s beta is available now to the public via an e-mail code, and is well-worth checking out if you can get ahold of one. As the full game’s March 11 release date inches ever closer, FPS die-hards will be salivating, and non-fans should be as well. The most surprising thing about Titanfall for me was just how accessible it was for people who aren’t normally into FPS games. That could wind up being the game’s greatest triumph over the long-haul. It’s one thing to deliver a classic game, and it’s another to do so in such a way that it opens the eyes of non-fans and showcases just what makes an FPS game so engaging. Titanfall doesn’t just put a fresh coat of paint on some tired walls — it goes into the foundation and fixes a lot of things that are wrong, keeping the stuff that’s functionally fine and bringing some new mechanics into the mix. Even in its incomplete state, Titanfall offers up a polished experience and should be well worth its asking price.