Looking at the current gaming scene, there was no better time for the duo of Toejam and Earl to make a comeback. After all, their original Genesis game was a top-down roguelike game with randomly-generated levels and a funk-inspired soundtrack and aesthetic. As a triple-A game back in 1991, that made it an oddity (although eventually a sleeper hit and a cult classic as well), but twenty-five years later, that means it fits right in with the current indie gaming scene. In fact, it wouldn’t be surprising to find at least one indie developer citing the original Toejam and Earl as an inspiration, so it it feels a bit like the champions are coming back to show us how it’s done. But will Toejam and Earl: Back in the Groove be a proper comeback vehicle for the alien twosome? If the demo I played was any indication, it quite definitely might be.

In terms of gameplay, Toejam and Earl: Back in the Groove is a direct fusion of the gameplay elements found both in the original game and its 1993 sequel, Panic on Funkotron. From the original, you have the main gameplay elements of hopping between randomized levels on elevators, searching for presents and your missing spaceship parts while avoiding humans. From the sequel, you have the ability to use radar to sense what nearby bushes or structures contain presents, the Hyperfunk Zone bonus area, and the occasional jam session to earn more money. Alongside all of this, new terrain such as water and new gameplay elements such as random elevators that can allow you to skip levels and multiple characters with different stats are now added, naturally. 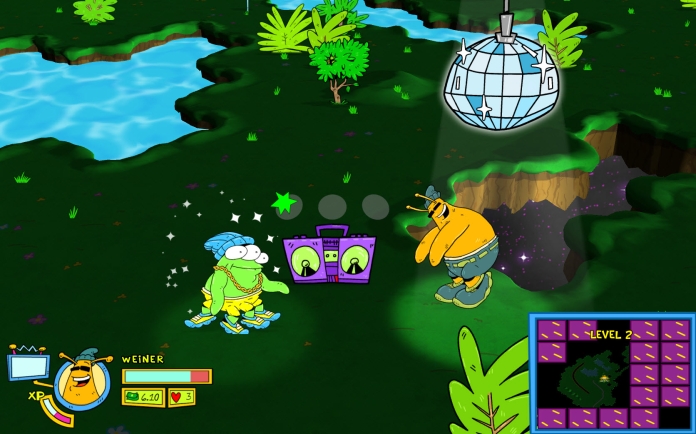 Having never played the original (only the sequel), the experience was a bit new to me, but easy to get into. The game controlled quite nice, and the randomized elements and power-ups contained in presents made for a challenge, alongside having to maneuver around the numerous enemies lurking about. It does run the risk of the fickle finger of fate showing up with random levels, especially since some enemies were rather aggressive, but the levels I got to sample were definitely well-designed and fun to explore. The graphical update now allows for even more colorful scenery and foes, such as mailmen on segways and the classic boogeymen and mad dentists, and the art style is absolutely incredible, especially with the mix of 2D and 3D being rather appealing (unsurprisingly, the soundtrack is rather awesome as well). There are a few niggles, such as having to line up with a bush to shake it in a three-quarters view now, which takes some getting used to, but the end result was still quite fun, and showcased charm and humor in all areas, including the animations and the little quips between the title characters.

Adult Swim Games has indeed made a winning decision to help bring such a classic franchise back to the masses and Humanature Studios are doing a terrific job so far in capturing what made the original games such a success. If all goes well, Toejam and Earl: Back in the Groove will be an amazing blast to the past with enough new twists to make it another indie darling as well. Back in the Groove is due out in 2017, and combined with Sonic Mania, should bring back those memories of playing your Genesis to the tunes of Crowded House and Roxette quite nicely (I know, I didn’t listen to a lot of funk as a kid, sadly).